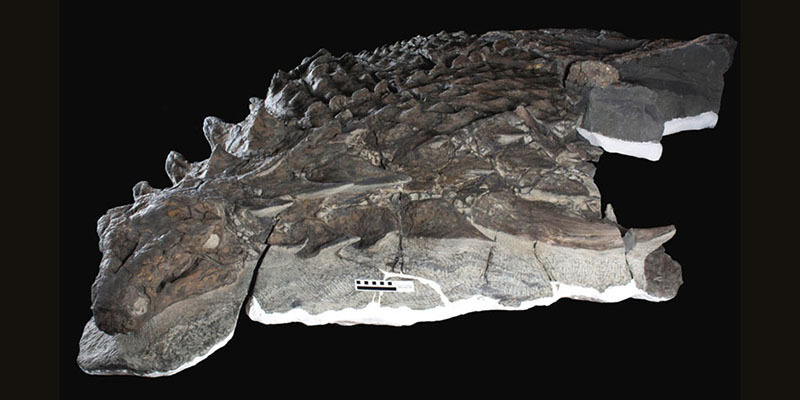 All Posts
Paleontologists around the world published some incredible new finds and research in 2017. We count down the year’s most amazing, surprising, thought-provoking, and important stories.

In reverse chronological order, from a 130,000-year-old butchered mastodon from suburban San Diego, to many billion-year-old possible eukaryote fossils, here are the top paleontology stories of 2017. 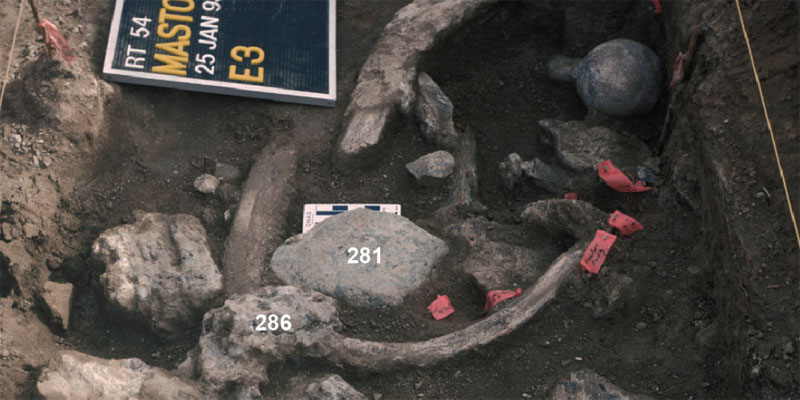 In the early 1990s, scientists collected the remains of a mastodon in suburban San Diego, California. An analysis of the remains published this year by Steven Holen and colleagues shows that the mastodon died 130,000 years ago. What’s more, the bones show signs that they were butchered by humans using stones, representing the oldest evidence of human habitation in the Americas. Although no skeletal remains of humans were found, Holen and colleagues point to similarities to other ancient human butchery sites in the Old World, as well as experiments conducted by the authors on fresh bones to support their case. If confirmed, this would suggest humans were living in the Americas more than 100,000 years earlier than previously thought. Read the full story. 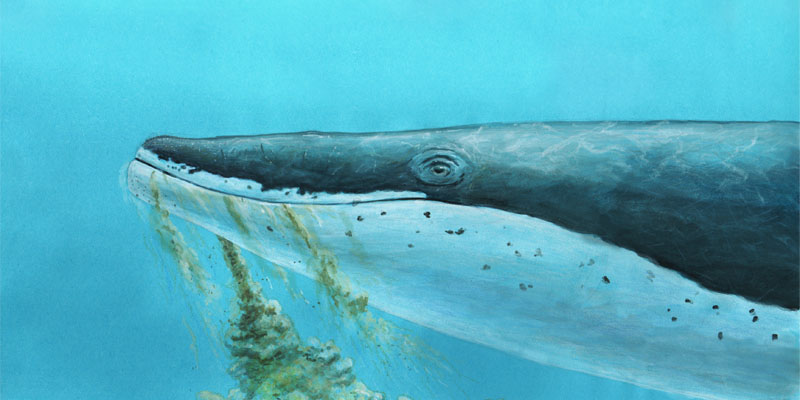 Whale with interlocking teeth for filter-feeding

Baleen whales use long keratinous fibers, known as baleen, growing from their palate to filter plankton, crustaceans, and fish from the water. However, the earliest members of the baleen whale lineage didn’t have baleen, but instead used their teeth to filter! A new toothed baleen whale, Coronodon, was discovered in 29-million-year-old rocks in South Carolina, USA, and described by Jonathan Geisler and colleagues. Coronodon had cusped, triangular teeth that interlocked when the mouth was closed, with small gaps allowing water to exit. It helps show that these early whales developed filter-feeding long before the evolution of baleen. Read the full story. 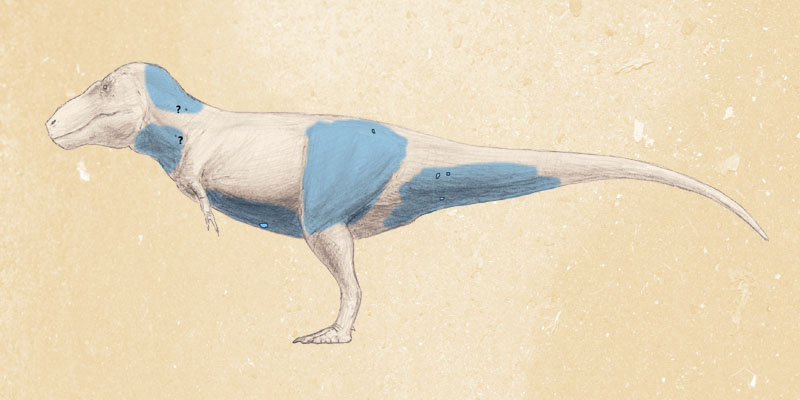 Tyrannosaurus couldn’t run, and may have been lipless and scaly

Actually three different stories on the life and times of everyone’s favorite meat-eating dinosaurs, 2017 brought new information on the famous predators. William Sellers and colleagues showed that Tyrannosaurus and other large tyrannosaurs were too heavy run without breaking their leg bones. They point out that the long legs and strides of tyrannosaurs mean that they could still walk faster than most humans can run. Thomas Carr and colleagues announced the discovery of a new tyrannosaur species, Daspletosaurus horneri, that seems to have tight, scaly skin on its snout without any sign of muscular lips. Research published by Phil Bell and colleagues documented all known skin fossils of large tyrannosaurs, which suggest that they may have been completely scaly, unlike their feathered ancestors. Read the original research on Tyrannosaurus running ability and facial sensory system. Read the full story on tyrannosaur feather or scale debate. 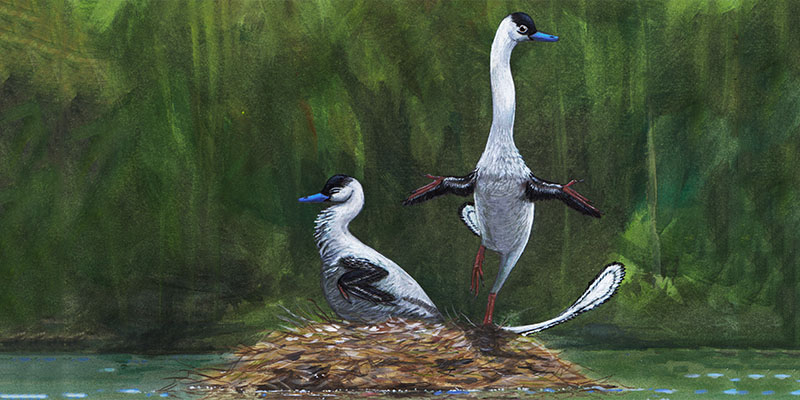 Paleontologists Andrea Cau and colleagues unveiled a new, and utterly bizarre raptor from Upper Cretaceous rocks in Mongolia. Looking like a toothy swan, Halszkaraptor is thought to have been an amphibious fish-eater that used its wings to help swim underwater. Halszkaraptor lived alongside its famous cousin Velociraptor, in an ancient desert with swampy oases. This incredible specimen was smuggled out of Mongolia and was discovered in France. It was so weird, the scientists who first described it photographed it with X-rays to ensure that it was not made from different skeletons cobbled together to fetch a higher price. That incredible skeleton has since been returned to Mongolia. Read the full story.

Lida Xing and colleagues announced the discovery of a baby bird in a small nugget of amber found in Upper Cretaceous rocks in Myanmar. The bird, about the same size as a modern chickadee, is one of the best preserved of all fossil birds showing details of the skin and feathers. This was a young enantiornithine, a member of a diverse lineage of Cretaceous birds that retained teeth and clawed fingers. Most enantiornithines appear to have been able to fly shortly after hatching, and the well-developed flight feathers in the amber specimen show that it was no exception. Read the full story.

An incredibly well-preserved armored dinosaur was discovered in Lower Cretaceous rocks excavated from an oil sands mine in Alberta. The specimen proved to belong to a new species of armored dinosaur, named Borealopelta markmitchelli by paleontologists Caleb Brown and colleagues. Its skeleton, including its bony armor, remained in life position and uncrushed, and the armor even preserves remnants of their keratinous sheaths. Amazingly, remnants of the original pigments show that Borealopelta was mostly rust-colored. Read the original research. 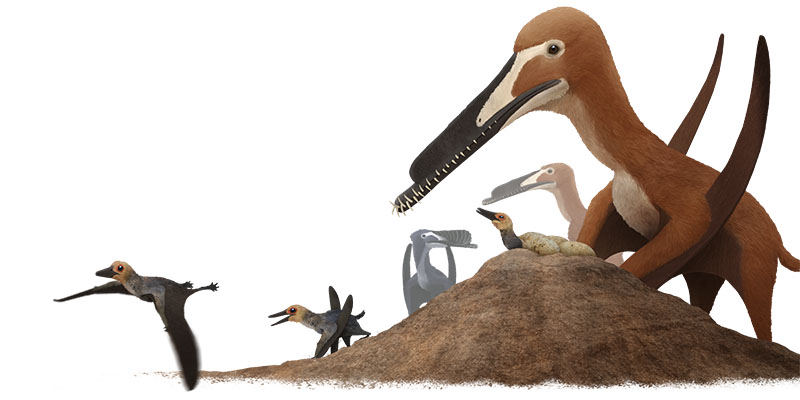 Hamipterus didn’t make much of a splash when first named in 2014, but there were signs that it was something special. The long-snouted fisher was known from dozens of specimens with different snout crests in males and females, as well as five eggs. In 2017, Xiaolin Wang and colleagues published a follow-up study describing more than 200 eggs preserved alongside hundreds of adults, making Hamipterus one of the most well-represented of all pterosaurs. The ancient nesting grounds of Hamipterus were on the shore of a lake in northwestern China. On at least eight occasions, torrential rains and landslides washed out the whole nesting site. The high numbers of skeletons and eggs found together suggest that pterosaurs, like many birds, may have nested in large numbers on isolated beaches. Analysis of embryonic bones shows that Hamipterus, unlike many other pterosaurs, may not have been able to fly as very young chicks. Read the original research. 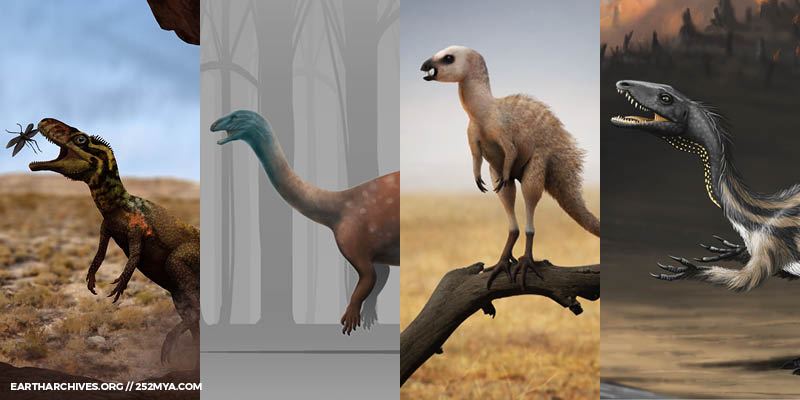 Not all giant fossil reptiles are dinosaurs, instead dinosaurs are a specific group of reptiles with S-shaped necks and upright hindlimbs that first emerged in the Triassic Period. They were the dominant terrestrial vertebrates for most of the Mesozoic and live on today as birds. They include long-necked giant sauropodomorphs like Brontosaurus and Brachiosaurus; two-legged mostly-carnivorous theropods like Tyrannosaurus, Velociraptor, and birds; and the beaked and bird-hipped ornithischians like Stegosaurus, Iguanodon, and Triceratops.

Traditionally, the sauropodomorphs and theropods had been considered closely-related because of features of the hands and back bone. New research by Matt Baron and colleagues shows that this might not be right, as their analysis of over 450 skeletal characteristic suggests that theropods might be most closely related to ornithischians rather than sauropodomorphs. Later research by Baron also showed that a mysterious Jurassic dinosaur named Chilesaurus, initially thought of as a theropod, might actually be an ornithischian. Not all paleontologists agree with Baron’s work and follow-up studies will be published in 2018 and beyond. Read the full story. 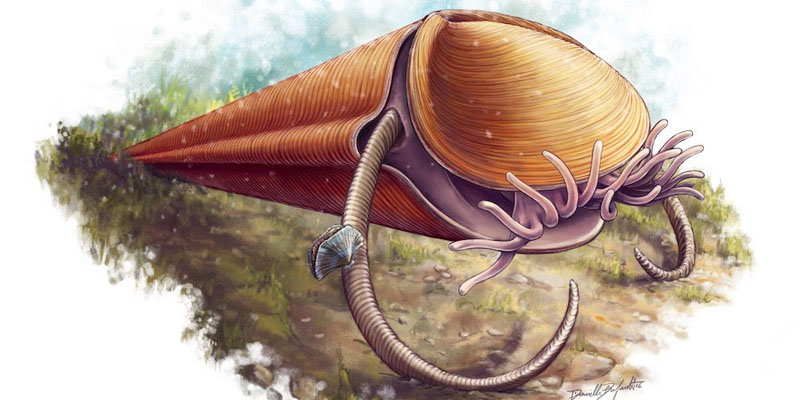 Hyoliths find their place on the Tree of Life

Hyoliths are an enigmatic group of shelled invertebrates known from Paleozoic marine rocks. Their shells are bizarre, made of a large cone with a door and two curled stilts. They’ve long been considered mysterious animals with unclear relations. Joe Moysiuk and colleagues studied hundreds of specimens of a Cambrian hyolith known as Haplophrentes. Many of the those specimens have soft tissues preserved, which allowed Moysiuk and colleagues to discover that they’re lophophore-bearing animals. Lophophores are feeding organs covered in tentacles that help filter food from the water and move it into the mouth, and are found in a number of different marine animals. Hyoliths are most closely related brachiopods, also known as lamp shells, which are among the most abundant of Paleozoic fossils, but are restricted to deep water environments today. Read the full story. 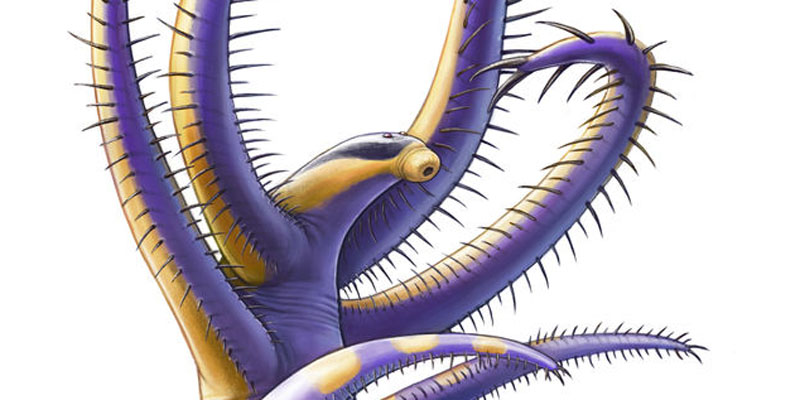 The Cambrian Explosion is one of the most important early stages in the history of animals, where numerous different animal lineages rapidly appeared in the fossil record in Middle Cambrian rocks. The Burgess Shale in the Rocky Mountains of British Columbia, Canada was first discovered over 100 years ago, and is one of the most famous sites to find fossils from the time of the Cambrian Explosion. Despite extensive study, new organisms are still being discovered, including Ovatiovermis, named by Jean-Bernard Caron and Cédric Aria. Ovatiovermis was a 2 cm (¾ inch) long worm-like animal with nine pairs of legs. The rear three pairs were short and had hooked ends they used to grasp on to hard surfaces. The front six pairs were longer and feather-shaped, and were used to filter small food items out of the water and into its mouth. When feeding, this ancient suspension-feeder may have waved its arms in a way that resembled clapping, leading to its scientific name which means “ovation worm.” Read the full story. 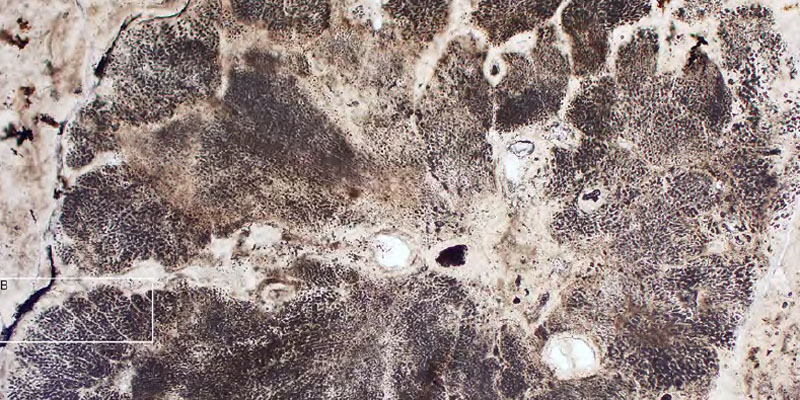 Stefan Bengtson and colleagues published on two different sets of fossils which may represent, by far, the oldest examples of eukaryotes. Eukaryotes have complex cells where their DNA is held in a nucleus, and many cell functions are performed by organelles, structures within the cell that are analogous to organs. They include all multicellular organisms including animals, plants, and fungi. Bengtson and colleagues found possible fungal cell fossils from 2.4-billion-year-old rocks in South Africa, and in a separate study name two species of red algae from 1.6-billion-year-old rocks in India. Read the full story.


Related Stories
Paleontologists find fossil bird with iridescent feathers
Ice cream cone with a trapdoor finds its place on the Tree of Life
Fossil Pokemon and their extinct inspirations
Humans may have been in the Americas over 100,000 years earlier than thought
Burgess Shale animal clapped its feathery arms during feeding
//sulc.us/t0j08
/articles/the-top-11-paleontology-stories-of-2017/