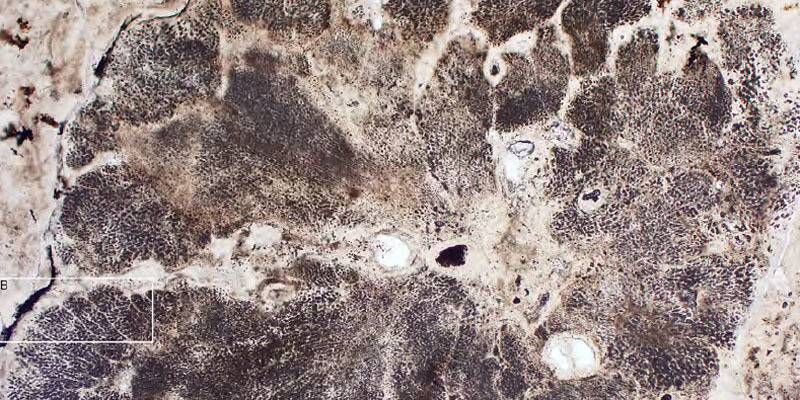 All Posts
Exceptionally well-preserved fossils of red algae living in a shallow equatorial sea have been discovered in central India. These fossils represent the oldest known multicellular organisms and push back the origin of complex life by hundreds of millions of years.

Paleontologist Stefan Bengtson and colleagues have discovered the fossilized remains of the oldest multicellular organisms yet known. The algal fossils were deposited in a shallow, equatorial sea in what is now central India. The researchers named three new species of organisms found among sedimentary structures. Known as stromatolites, these structures are layered mounds of sediment that are formed by photosynthetic bacteria. 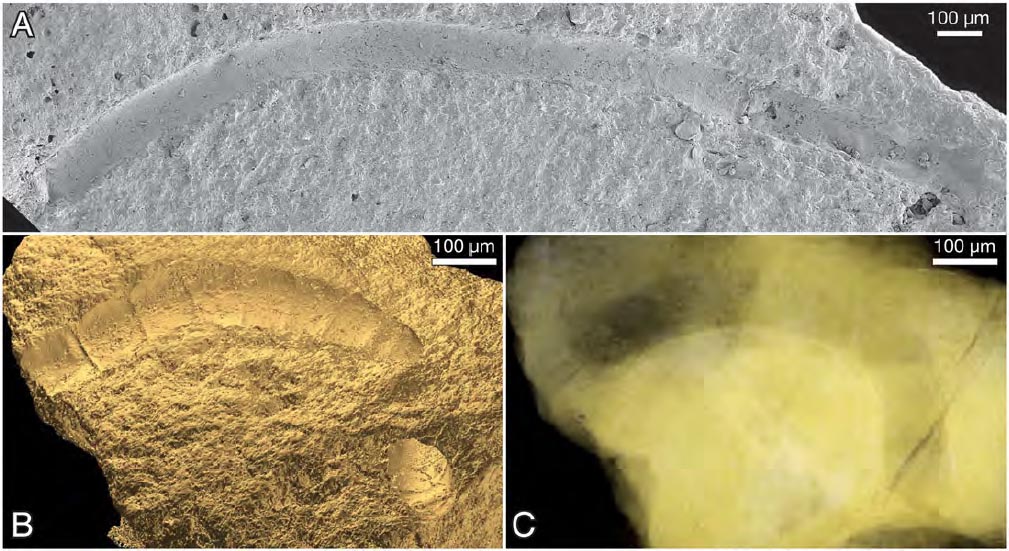 Images of fossilized cells of the red algae Rafatazmia chikatrootensis made with a scanning electron microscope (A), and a synchrotron-generated X-ray tomographic microscope (B and C). The cells are cylinder shaped, and stacked forming filaments similar to some modern red algae.

Both Rafatazmia and Ramathallus show features that indicate they are types of red algae. Modern red algae include the red- or maroon-colored sea weeds including dulse and nori, as well as coralline algae. Denaricion's lineage is less clear, and may have been formed by bacteria. Red algae and other plant-like organisms have a single evolutionary origin, and are part of a lineage called archaeplastids, or plants in the broad sense.

Rafatazmia and Ramathallus represent the oldest fossil remains of red algae or any plant-like organisms, as well as the oldest fossil of any eukaryote. Eukaryotes are a major branch of the tree of life that includes the plants, animals, fungi, and large numbers of single-celled organisms such as amoebae. Among other features, they are characterized by organelles--membrane-bound structures within the cells that perform functions linked to metabolism and respiration and are similar to organs within the body. 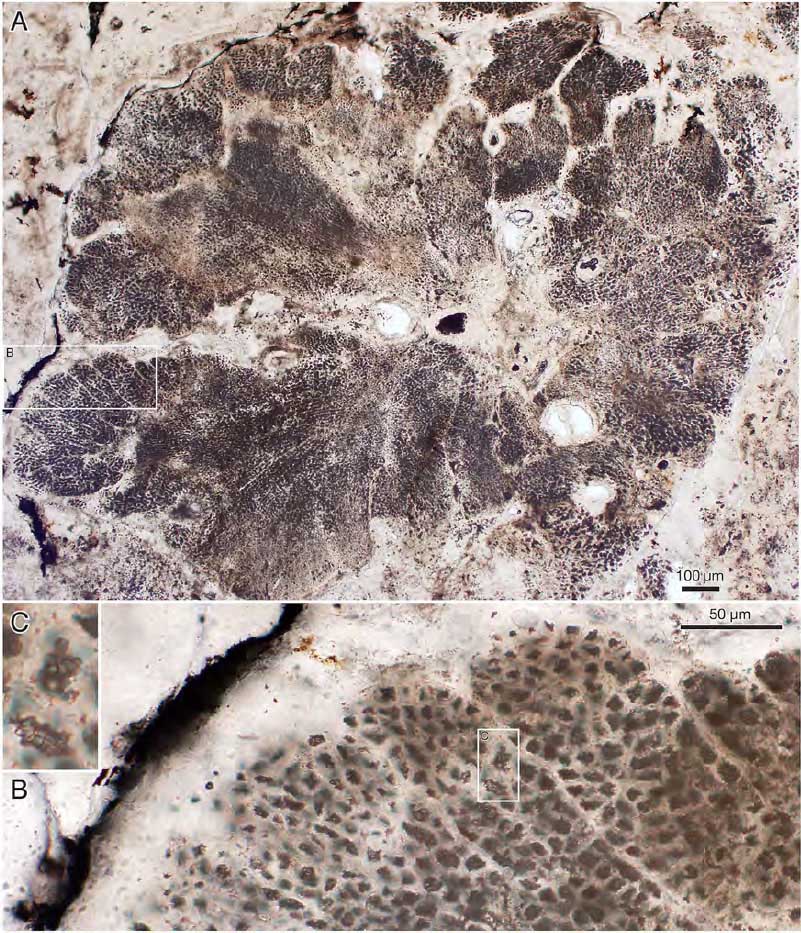 Many organelles are believed to be the descendants of formerly free living bacteria living within the cells of the ancestral eukaryotes. This idea is supported by anatomical similarities between organelles and certain bacteria, the presence of a unique genome within organelles, and their creation only by division of previously existing organelles. 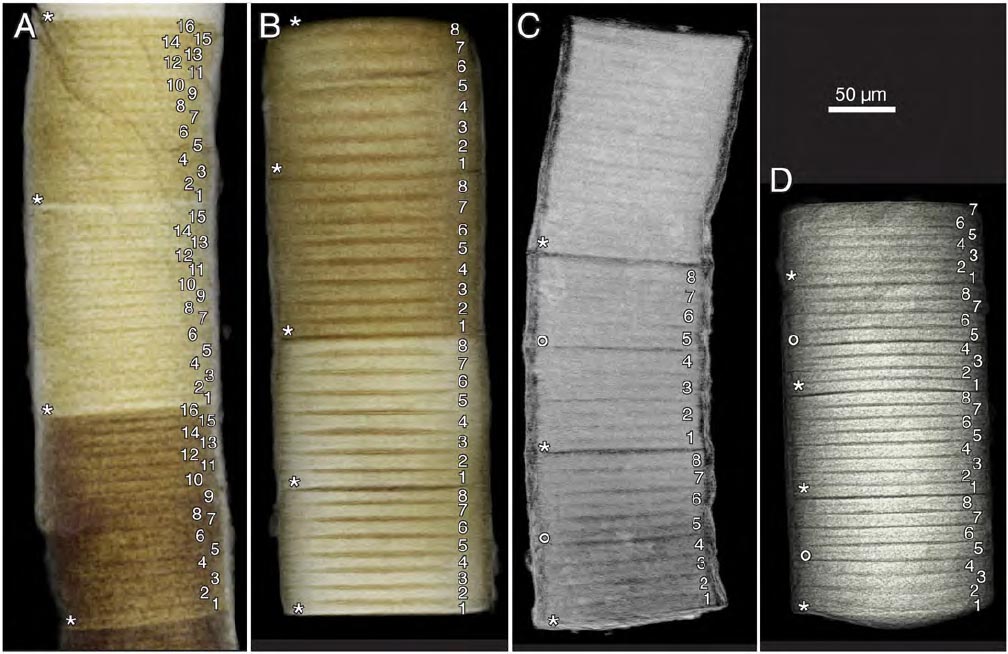 Synchrotron-generated X-ray tomographic microscope images of four specimens of Denaricion mendax, showing the stacked disk-shaped cells forming filaments. These specimens show that the cells appear to be joined in compartments of 4, 8, or 16 cells.

The theory that describes the origin of many organelles is known as endosymbiotic theory, and has gained widespread support among biologists. There must have been more than one endosymbiotic event in the history of eukaryotes, including an earlier event that led to mitochondria and a later event that lead to chloroplasts in the plant lineage. There are even examples of secondary endosymbiosis where eukaryotic cells have engulfed other eukaryotes. Brown algae, such as kelp, are descendants of eukaryotes that engulfed free-living red algae cells.

Prior to this discovery, the oldest eukaryotic remains, also red algae, were found in rocks dated to 1.2 billion years. This discovery pushes the origin of the eukaryotes to more than 1.6 billion years ago, as there must have been two endosymbiotic events before 1.6 billion years ago. The presence of red algae so early implies that there is a long evolutionary history of the ancestors of plants, animals, and fungi so far unseen in the fossil record.