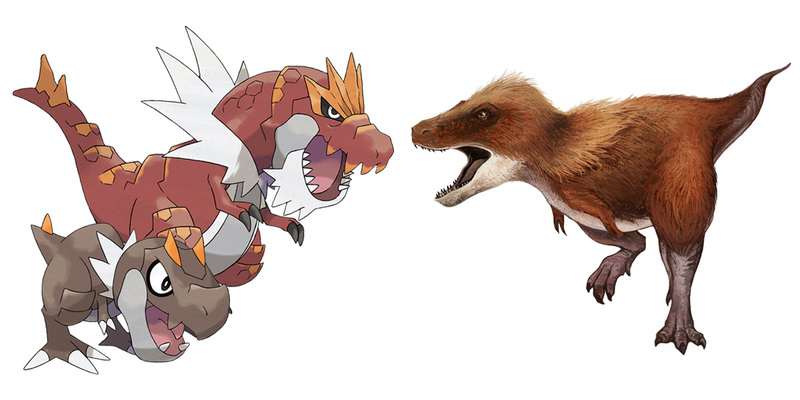 Fossil Pokemon and their extinct inspirations

All Posts
Two decades after its birth, Pokémon continues to draw inspiration from an extensive array of fossil animals.

The international hit franchise was launched in Japan in 1996 by developer Game Freak. Its founder Satoshi Tajiri has said that the creature-collecting game, which defined the genre and spawned countless other franchises in its footsteps, was a contemporary incarnation of the Japanese culture of bug-catching. Echoing the similar desire for exploration and identification of animals, fans from other nations who don’t share the same fondness of beetles have repeatedly compared it to birding instead.

As a result, many of the creature’s designs are noticeably comparable to real world organisms, some of which went extinct long before humans existed. The series specifically refers to these creatures as fossil Pokémon, which need to be revived from fossils found in quarries or given by researchers in-game. Any fan of the franchise who is familiar with paleontology would have been aware that within 20 years of its history, the designers have featured a wide variety of extinct creatures, ranging from obscure invertebrates from more than 500 million years ago to the iconic Cretaceous dinosaurs. 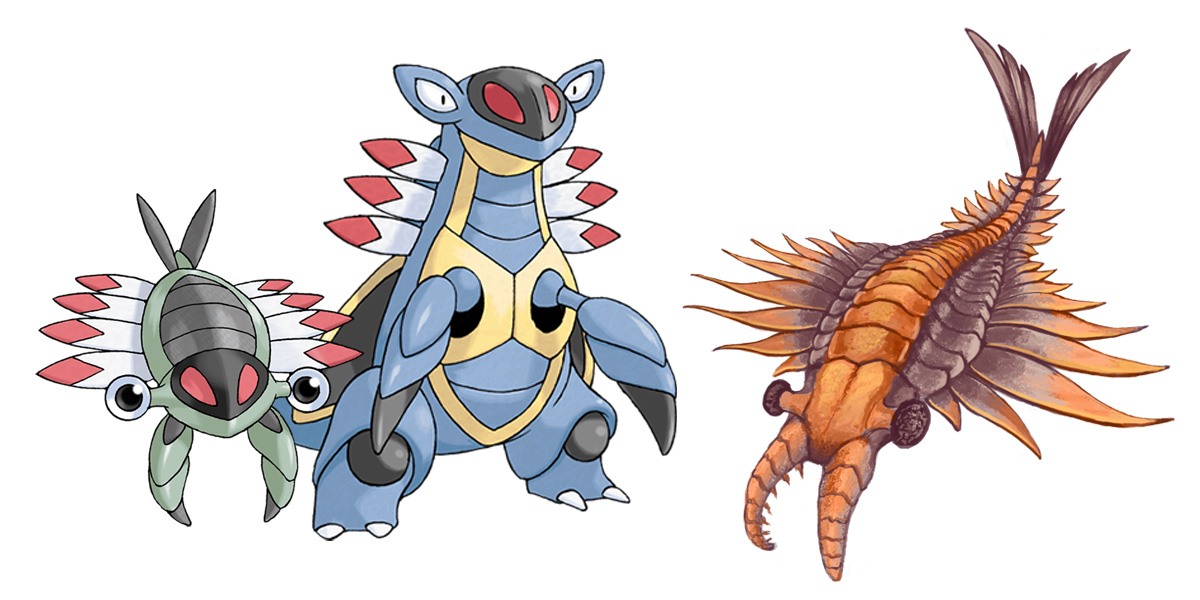 From the waters of the Cambrian the predator Anomalocaris is present in the game as the bug Pokémon Anorith and Armaldo. Just like their real-world counterpart, the Pokémon are aquatic and can swim with the wing-like appendages on the sides of their bodies. The twin appendages near the front end of its head were likely used to catch prey, a view also mentioned in the games. While the “evolved” form Armaldo’s bipedal stance and habitation of land is likely the designer’s artistic license, Anorith’s morphology stays true to the real Anomalocaris. 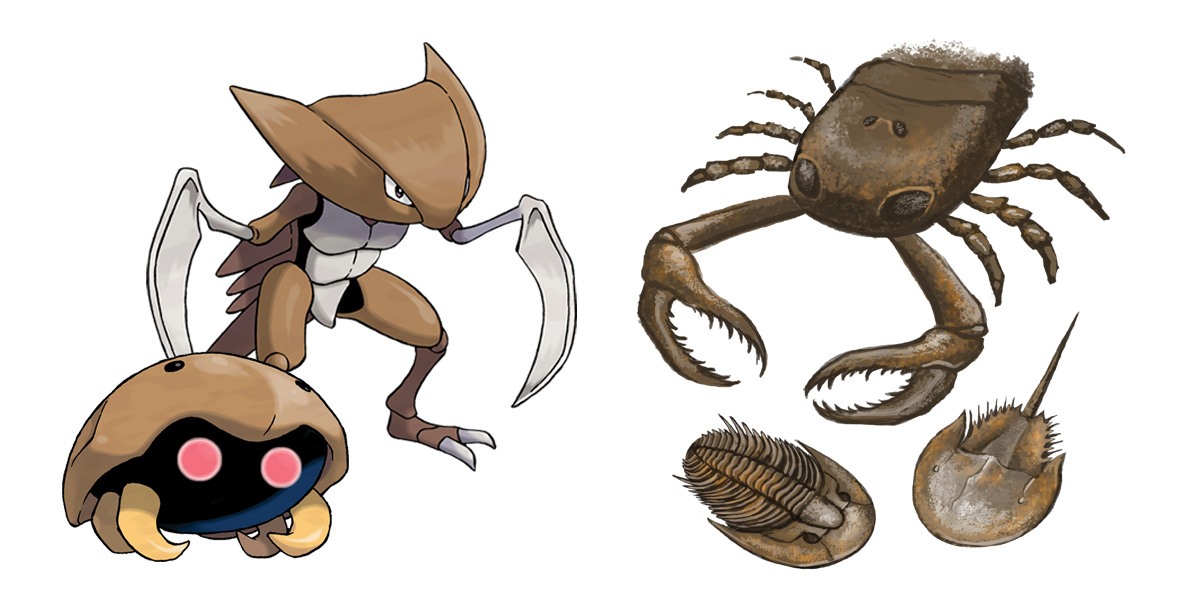 Around the same time period, the famous group of invertebrates known as trilobites appeared. Inspiring the Pokémon Kabuto and Kabutops, trilobites were a highly diverse group, with some 17,000 species known to science. They lived for over 250 million years, branching out to produce various kinds of body shapes. Kabuto is said to still exist in the Pokémon world’s present day, suggesting that it's partially inspired by another group of arthropods called the limulids, or horseshoe crabs, which is called kabutogani in Japanese. Horseshoe crabs appeared a bit later than trilobites, with four living species still dotting the shores of Southeast Asia, East Asia, the American Atlantic coast, and the Gulf of Mexico. The predatory Kabutops and its sickle claws, on the other hand, may be loosely based on the sea scorpions, or eurypterids. One notable member of the group is the gigantic Jaekelopterus, potentially the largest arthropod ever to have lived, which could have grown beyond 250cm (8ft). 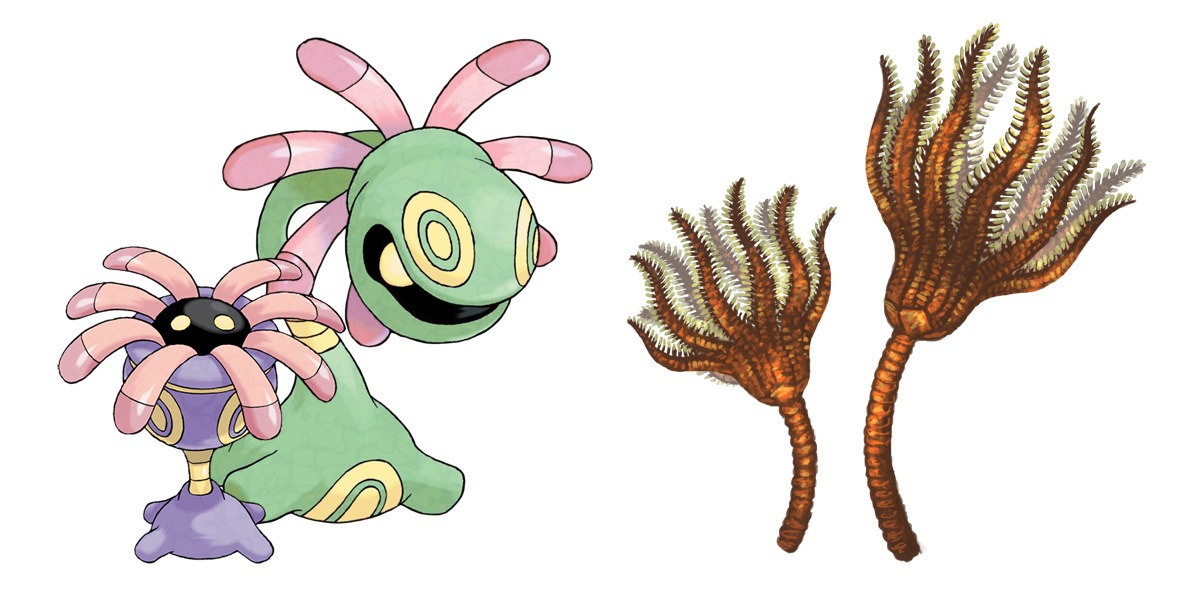 After the Cambrian ended with a mass extinction, a new period called the Ordovician began. It is known for the first appearance of fishes, the first group of vertebrates to populate the Earth. Game Freak, however, picked another group of organisms which blossomed during this age— the sea lilies, also known as crinoids. Despite the Pokémon Lileep and Cradily being assigned the grass type, real crinoids are actually animals grouped together with starfish and sea urchins under the phylum Echinodermata. These soft-bodied creatures are known for their spiky bodies and radial symmetry, giving them the superficial resemblance to flowers. Although many crinoids are indeed mostly immobile like Lileep and Cradily, some living members of the group do not actually possess stalks. These crinoids without stalks are collectively known as feather stars, and they are capable of free swimming. 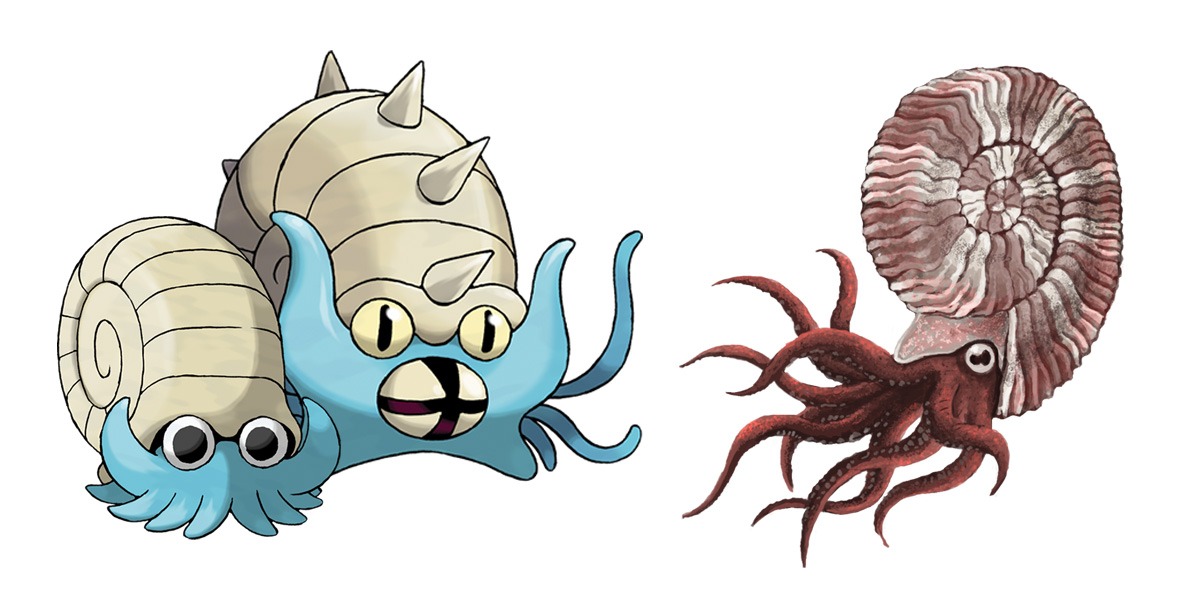 Fast forward to 400 million years ago and the designers picked yet another aquatic invertebrate for inspiration. The shelled cephalopods called ammonites star in the game as Omanyte and Omastar, the Pokémon that gained pop icon status during the crowdsourced gaming experience “Twitch Plays Pokémon” in 2014. The name ammonite itself comes from the Egyptian god of Ammon, which is often portrayed wearing coiled ram horns similar in structure to the typical ammonite shell. In reality though, the ammonites were a successful group which only went extinct at the end of Cretaceous, 66 million years ago. Not all ammonites were alike, though. Some of them reached enormous sizes, curled at random directions, or uncoiled their shell into a cone-shape instead. 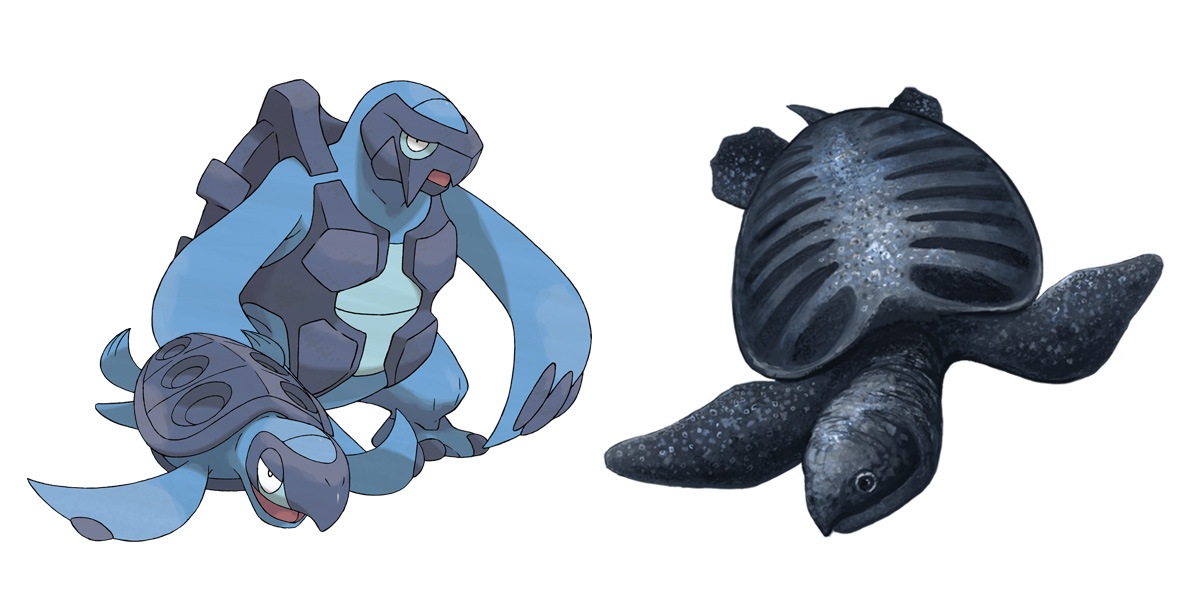 The last line of extinct marine Pokémon consist of Tirtouga and Carracosta, which are based on the late Cretaceous giant turtle Archelon or its slightly smaller relative Protostega. Both turtles are known to be related to today’s leatherback turtle, which sports a leathery back instead of a solid shell. Archelon’s claim to fame is its titanic size at more than 4m (13 ft), making it the largest turtle ever to have lived in the sea, beaten only by the freshwater Stupendemys. 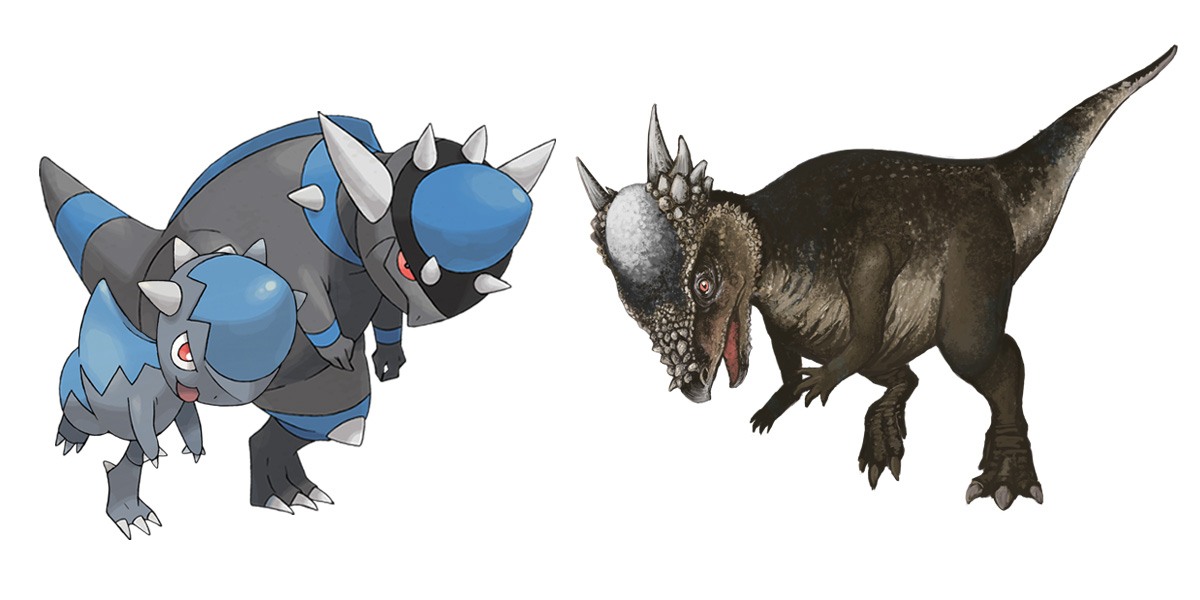 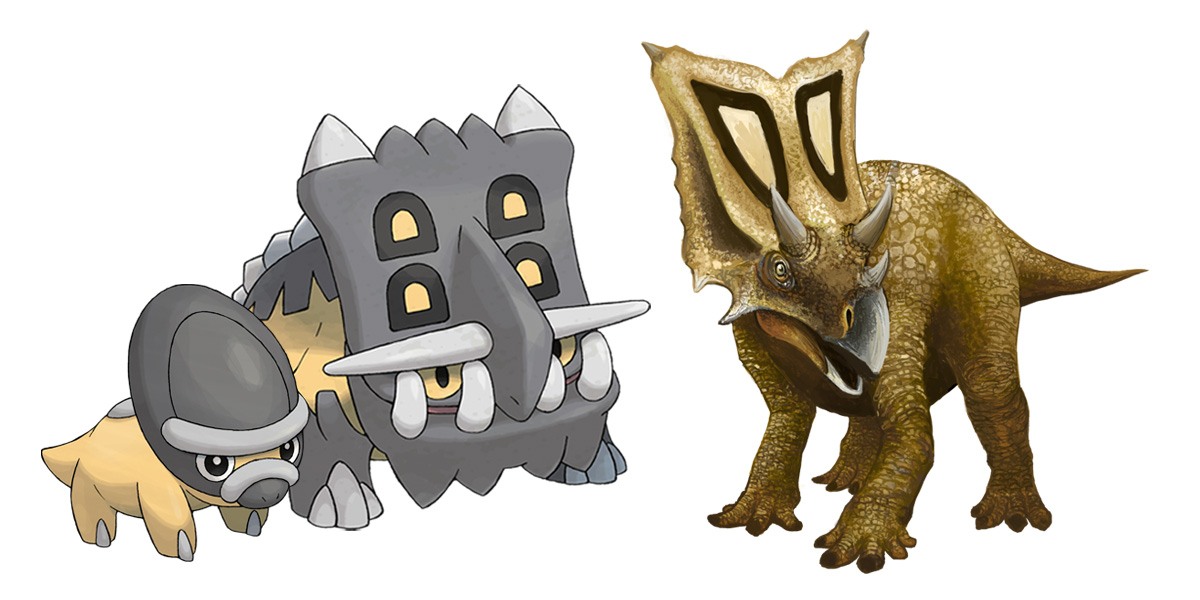 Interestingly, the first dinosaur fossil Pokémon were only introduced ten years into the franchise’s life, in 2006. The fourth generation of the game presented players with a choice of two dinosaurs with headgear, or marginocephalians: Cranidos the Pachycephalosaurus or Shieldon the ceratopsian. In the games, Cranidos and its evolution Rampardos are known for their exceptionally high attack and head-butting tendencies, a direct reference to Pachycephalosaurus’ thickened bony head. Their designs, however, seem to borrow ornamental elements from Stygimoloch or Dracorex, which some researchers nowadays consider to be the juvenile forms of Pachycephalosaurus. In contrast, Shieldon and its evolved form Bastiodon lean toward the defensive playstyle. The two Pokémon are based on generic ceratopsians of an undefined genus, more likely from the tall-frilled branch of the family called the chasmosaurines. 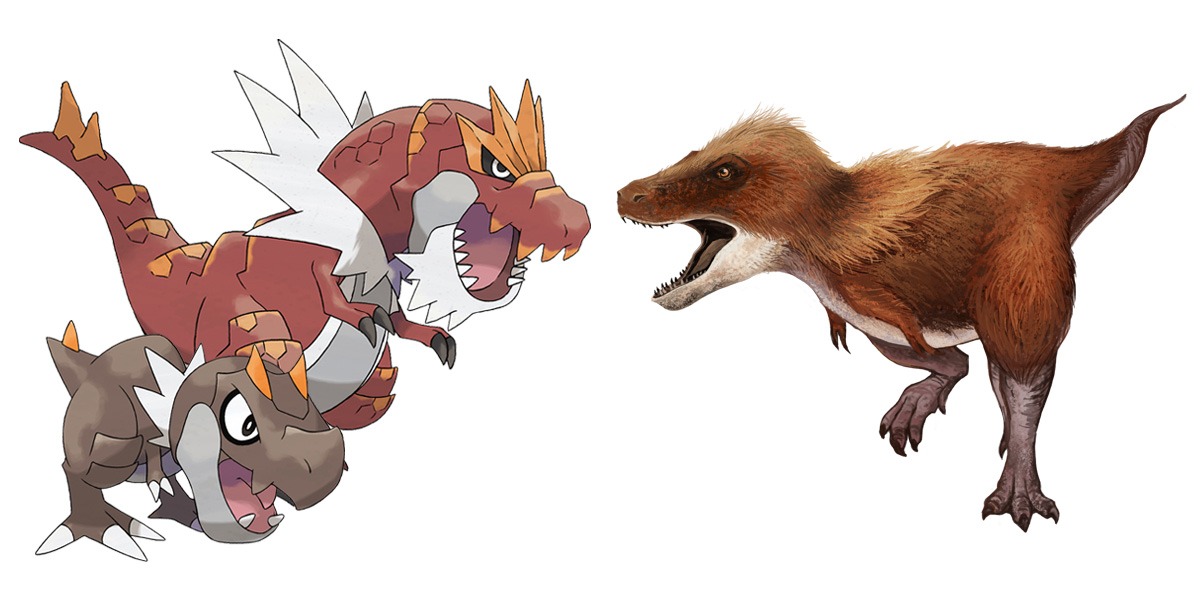 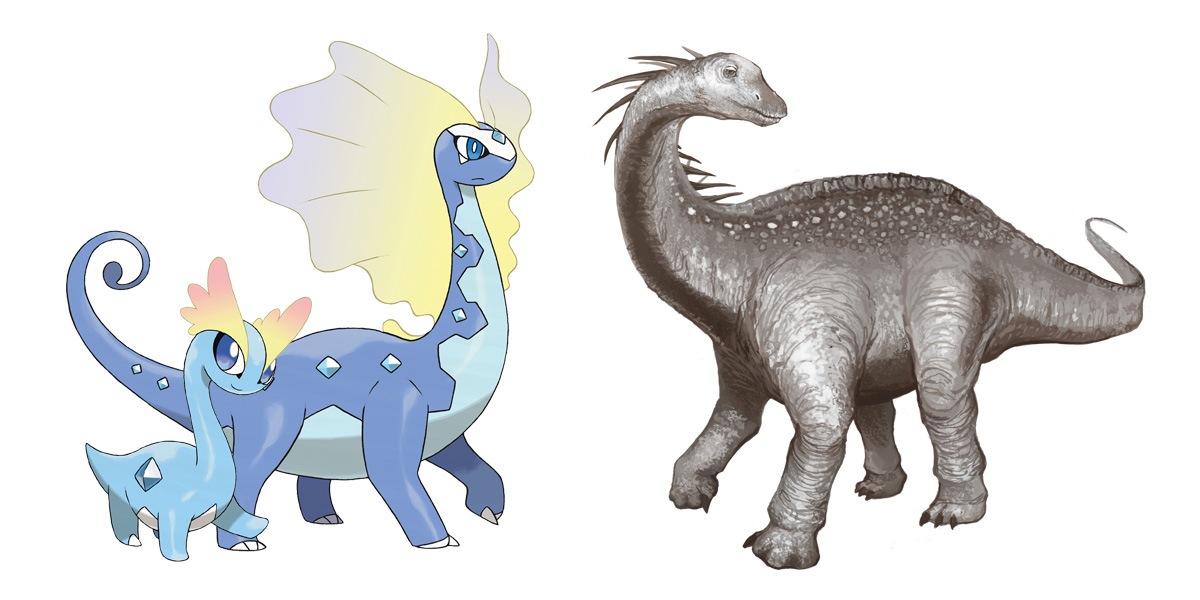 Only in the sixth generation of the game in 2013, the tyrant king dinosaur was introduced as Tyrunt and Tyrantrum. Specializing in biting moves, both Pokémon are designed with large heads and heavy bodies; and to the delight of paleontology enthusiasts — feathers. Breaking the streak of picking obscure extinct animals, the other fossil Pokémon line offered in this generation is inspired by another well-known dinosaur group. Amaura and its evolution Aurorus are clearly sauropods, although Game Freak did avoid the most well known members of the giants by choosing Amargasaurus as the backbone of their design. This Cretaceous dinosaur is known for its two rows of extended spines on the back of its neck. The structure was theorized to have had supported sails, but it is now generally believed to simply be spines covered in keratin. The design of Aurorus is taken to the extreme, with the solid structures removed from its back and replaced by a pair of wavy, aurora-like leathery sails to solidify the ice-theme. 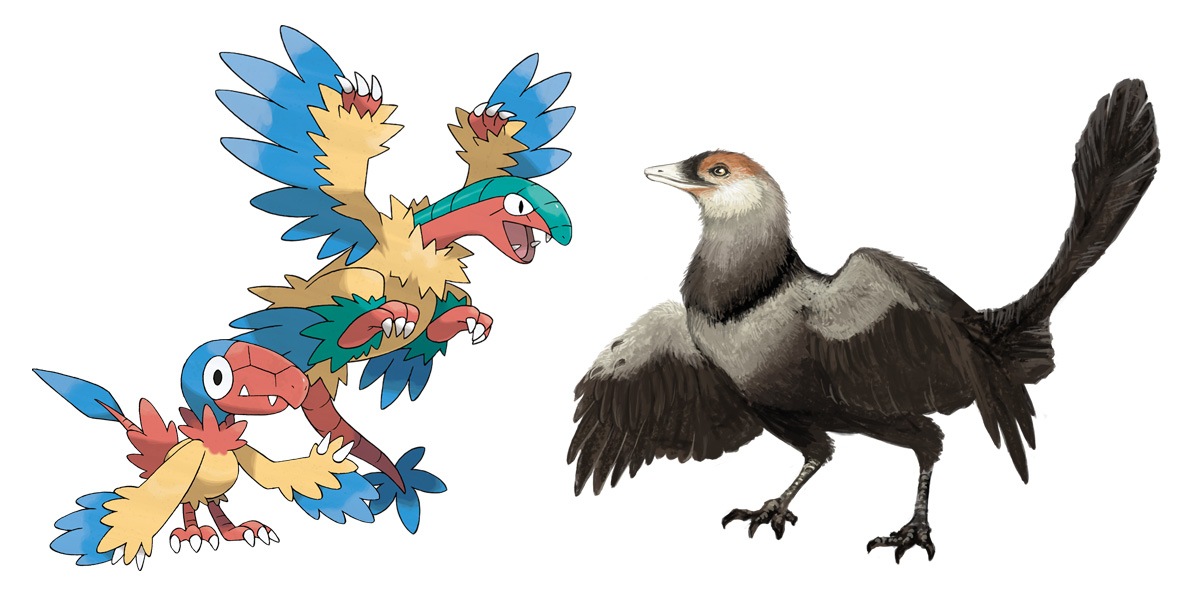 The last dinosaurian creature in the franchise is fittingly based on the iconic fossil Archaeopteryx. Known as the “first bird” Pokémon, Archen and Archeops are long-tailed, fully feathered dinosaur with visible teeth. Just like their namesake dinosaur, Archen is said to be incapable of flight, while Archeops is seen to constantly wobble as it hovers in the battlefield. Even its in-game description clearly states that Archeops is more suited to terrestrial life, akin to the real Archaeopteryx. 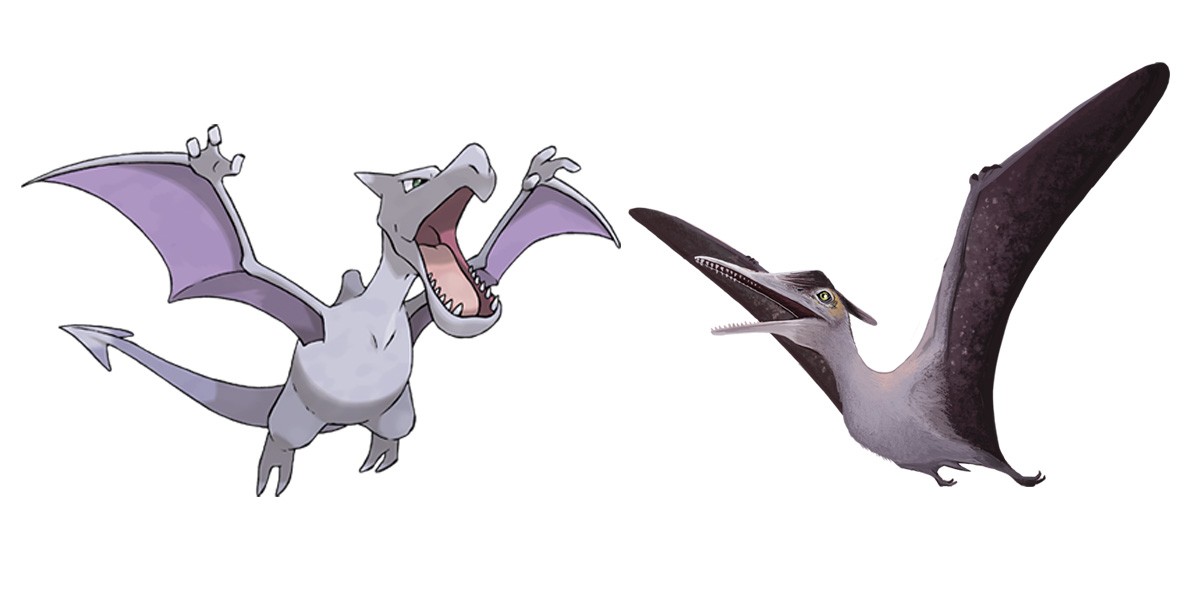 One of the first fossil Pokémon introduced in the first generation of the game, Aerodactyl, is known to resemble a pterosaur. Its anatomical features are mixed with various dragon features, making it impossible to pin down to a specific genus. Its Japanese name, Ptera, pretty much gives away its pterosaurian influence.

In a strange twist of events, Steven Vidovic, a paleontologist working for the University of Portsmouth, UK, sorted out numerous specimens of fossils assigned to the genus Pterodactylus and realized that six of them were different enough to be classified under a new name. In honor of the beloved franchise, he erected the genus name Aerodactylus. Despite the clear morphological differences between the Pokémon and the actual pterosaur, Vidovic hoped to engage the next generation of scientists through popular culture.

Just like many other popular franchises out there, throughout its existence Pokémon has inspired an entire generation of explorers and scientists. With the new installment of games set to be released near the end of this year, it continues to channel people’s desire to collect creatures in a fictional world while learning about real life animals, both extinct and living. It is probably not too late to hope for Hallucigenia or Wiwaxia Pokémon to catch and train this holiday season.