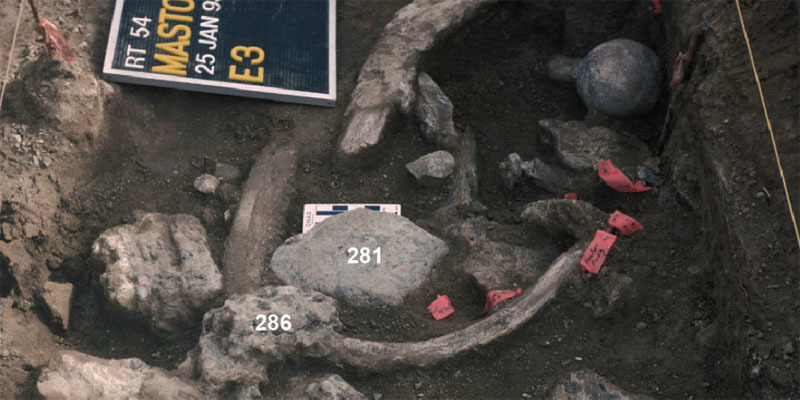 Humans may have been in the Americas over 100,000 years earlier than thought

All Posts
Extensive archaeological and anthropological data suggest that the first humans entered the Americas about 15,000 years ago from Asia to Alaska. A 130,000-year-old mastodon skeleton discovered in suburban San Diego shows signs of butchery only associated with ancient humans.

The first humans were thought to have entered the Americas via the Bering Land Bridge that linked Siberia with Alaska during the Ice Age. A vast body of evidence including artifacts and genetic analysis seem to indicate that humans first arrived in the New World about 15,000 years ago and quickly spread through North and South America.

However, an analysis by Steven Holen and colleagues of mastodon bones dated to 130,000 years ago suggests that humans were present in North America at that time. The partial mastodon skeleton has several bones that show signs of being butchered by humans. They include spiral fractures, which are made while the carcass is still fresh, and are present in both teeth and bones. Additionally, several bones show signs of being pounded on by rocks, and there are abundant bone chips. Similar signs of butchery are found with other early human archaeological sites, and were reproduced on elephant and cattle bones by the researchers in an experiment.

When the site in suburban San Diego was first excavated in the early 1990s, the fractured bones and teeth were found in two concentrations along with a large number of stones. The stones also show signs of being used in butchery, with numerous marks indicating that they were pounded together. Holen and colleagues note that the stones are unlike river cobbles found in the area, and may have been brought to the site from elsewhere.

This archaeological discovery pushes human history in the Americas back more than 100,000 years. Modern humans had only just left Africa at that time, so it's unlikely that the mastodon was butchered by modern Homo sapiens. There were several other populations of ancient humans present at the time, including Neanderthals living largely in Europe and the Middle East, Devisovans known from central Asia, and Homo erectus from East Asia.

The results will certainly be challenged by other researchers, but if confirmed represent an incredibly surprising twist in the story of human migration. Holen and colleagues urged archaeologists to search for human artifacts and remains in older rocks across North America. Additional findings of butchered bones of a similar age will help confirm the San Diego result. The discovery of human skeletal remains would also help identify which population of humans had entered North America.