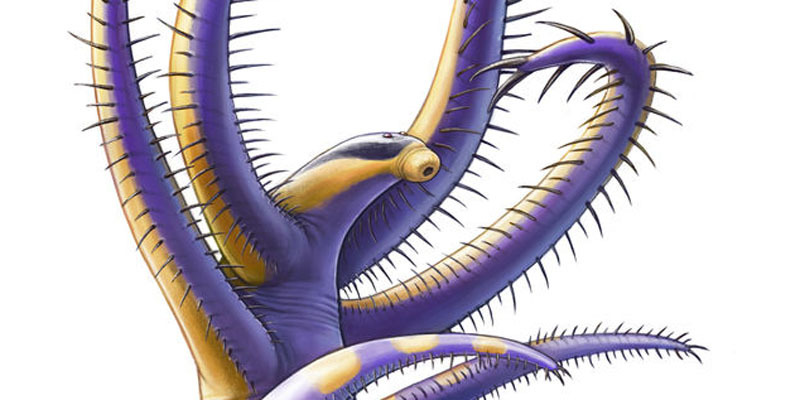 All Posts
A suspension feeding “worm” from the Cambrian Burgess Shale held on to the ground with its rear legs and used its feather-like front legs to capture food out of the water.

Just over 500 million years ago, a diverse community of early animals lived on an algal reef high atop an undersea cliff off the west coast of North America. Periodically, the outer edges of the reefs would collapse and huge masses of mud would careen down to the base of the cliff entombing any animals caught in the flow. These mud flows would become what is one of the most important fossil localities in the world, the Burgess Shale.

Since its discovery more than 100 years ago, the rocks deposited during the Middle Cambrian Period and exposed in the Rocky Mountains of British Columbia have been famous for yielding hundreds of specimens of early animals. The Burgess Shale preserves soft bodied animals in extraordinary detail, making it a type of fossil deposit known as a laggerstätte. Lagerstätten are important to paleontologists because they preserve soft tissues, and sometimes whole organisms, that are normally destroyed in the fossilization process.

The Burgess Shale and other Cambrian sites from around the world show the rapid appearance of complex large-sized animal species in the fossil record in a short span of time, an event known as the Cambrian Explosion. Prior to the Cambrian, the fossil record of animals shows that they were rare, and oftentimes microscopic. The rate of evolution seen during the Cambrian Explosion was higher than what's seen in most other times throughout Earth history, but was not as rapid as some previous estimates. In fact, a great deal of the sudden diversity of animal life can be attributed to biomineralization, as well as the evolution of large body sizes. 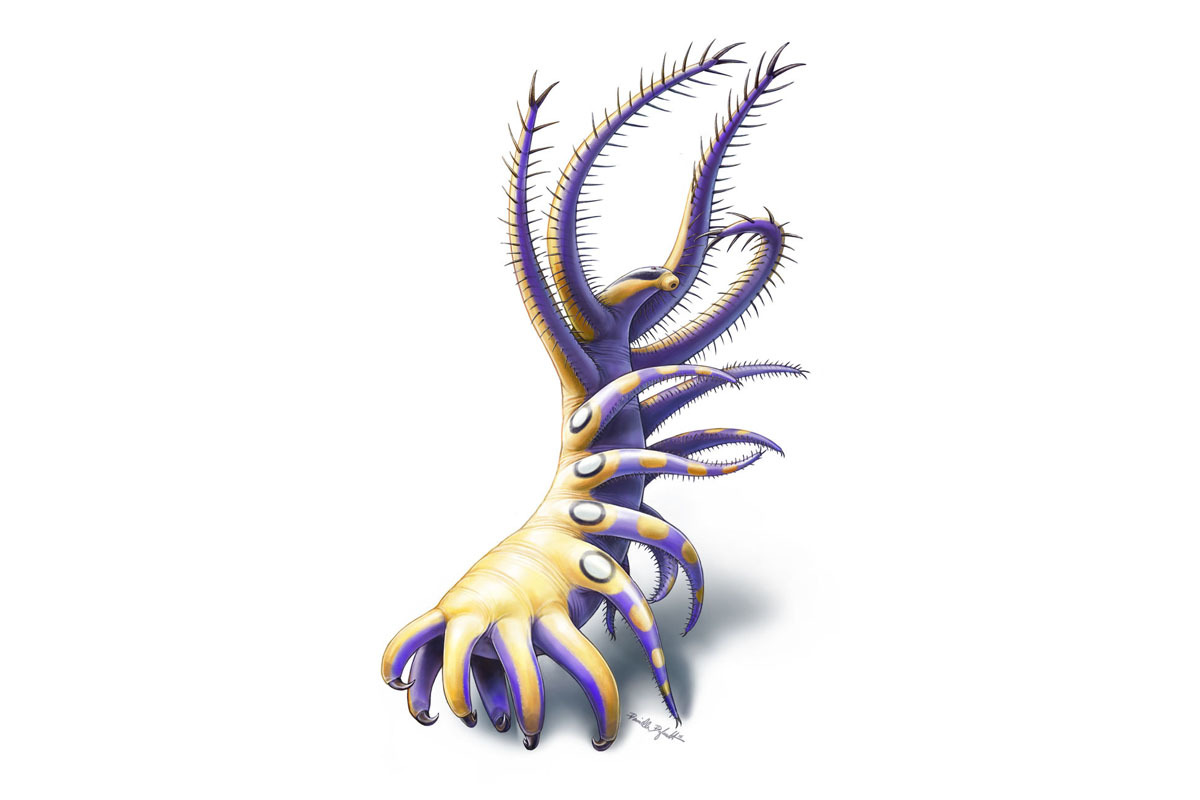 In addition to the rapid rate of evolution seen in these early animals, many species found in the Burgess Shale were completely unlike anything alive today. These Cambrian sites show a diverse fauna of animals that represent a huge number of experimental body plans. Many of those animals, such as Hallucigenia, Anomalocaris, and Opabinia were considered mysteries for many years, although later discoveries and research has allowed paleontologists to determine where they belong on the Tree of Life.

In early 2017 paleontologists Jean-Bernard Caron and Cédric Aria described a new Burgess Shale animal, Ovatiovermis cribratus, known from two specimens. The larger specimen is 18 mm (¾ inch) long and has a worm-shaped body that gets narrow at the head. The mouth is small and the head has two small eyes. There are nine pairs of legs along the length of the entire body. The first six pairs are long and bear paired bristles, superficially resembling feathers, and the last three pairs are shorter and bear hooks at their ends.

Caron and Aria interpret Ovatiovermis as a suspension feeder, holding on to the ground with its short, hooked rear legs. The longer bristled limbs were used to capture food items out of the water and move it to the mouth. The movement may have resembled clapping, which inspired its scientific name, Ovatiovermis means “ovation worm” in Latin.

Ovatiovermis was an early member of the panarthropod lineage. Panarthropods are a major lineage of animals and include the onychophorans or velvet worms, tardigrades or water bears, and the arthropods. Arthropods include crustaceans, insects, millipedes, spiders, scorpions, and trilobites (and many, many others). There are many other Burgess Shale animals that are also panarthropods including many that had been previously considered completely mysterious, like the previously mentioned Hallucigenia, Anomalocaris, and Opabinia. All of these animals, including Ovatiovermis, have segmented bodies and limbs and a ventral nervous system.

The discovery of Ovatiovermis shows that the Burgess Shale still has much to offer. In fact, Caron and Aria mention that at least two new species of Burgess Shale animal are soon to be described. More than 100 years after the initial discovery of the site, it continues to enlighten us about the early history of animals.


Related Stories
Ice cream cone with a trapdoor finds its place on the Tree of Life
Oldest example of a caring mother found in Canada
The alien world of the Burgess Shale
Late-living kin of iconic Burgess Shale worm found in England
Top eleven fossil stories of 2017
//sulc.us/bmabh
/articles/burgess-shale-animal-clapped-its-feathery-arms-during-feeding/