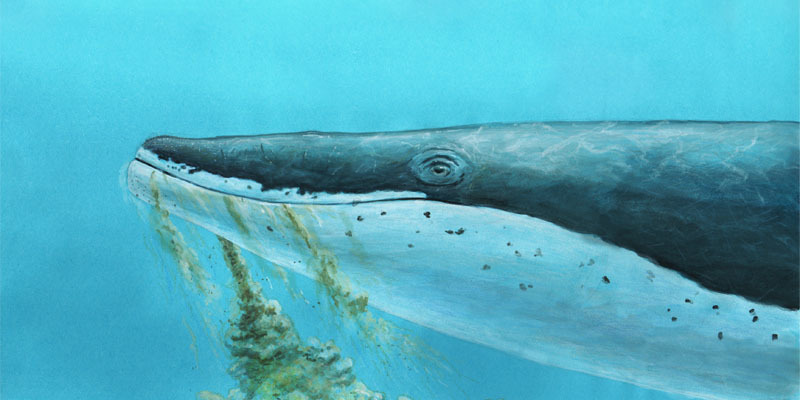 The evolution of filter-feeding in whales

All Posts
Baleen whales underwent a number of evolutionary transitions on the journey from small hunters to giant filter-feeders. Recent research shows that there were a large number of experimental methods of feeding, including the origin of filter feeding long before the origin of baleen.

Whales hold a place of honor among paleontologists as a lineage whose ancestry and evolution once had seemed forever mysterious, but is now well understood. Comparative anatomy, fossils and genetics have demonstrated that these masters of the sea are closely related to even-toed hoofed mammals, the artiodactyls like pigs, camels, deer and cattle. In fact, not only are they related, whales are part of the artiodactyl lineage and are the closest living relatives of hippos.

They rapidly emerged, with the earliest so-called walking whales living along the north shore of the Indian Ocean, just 15 million years after the extinction of the non-avian dinosaurs and marine reptiles (among many other animals). Fully aquatic whales emerged after another five million years and the two modern lineages diverged just ten million years later; their earliest fossils coming from 36-million-year-old rocks. The early archaic whales, archaeocetes like Basilosaurus, resembled extinct mosasaurs and living orcas and hunted in similar ways.

Of the two living groups, one of them, the toothed whales, or odontocetes, retains teeth. This group includes beaked whales, sperm whales, dolphins, and their kin; essentially any living whale with teeth as adults. The other living lineage, the baleen whales, or mysticetes, don't have teeth as adults but instead have a stiff, bristly tissue known as baleen growing from the roof of the mouth and used for filtering food from the water.

Baleen is one of evolution’s unique answers to the question, “How can I get the highest number of little animals out of a lot of water with minimal effort?” 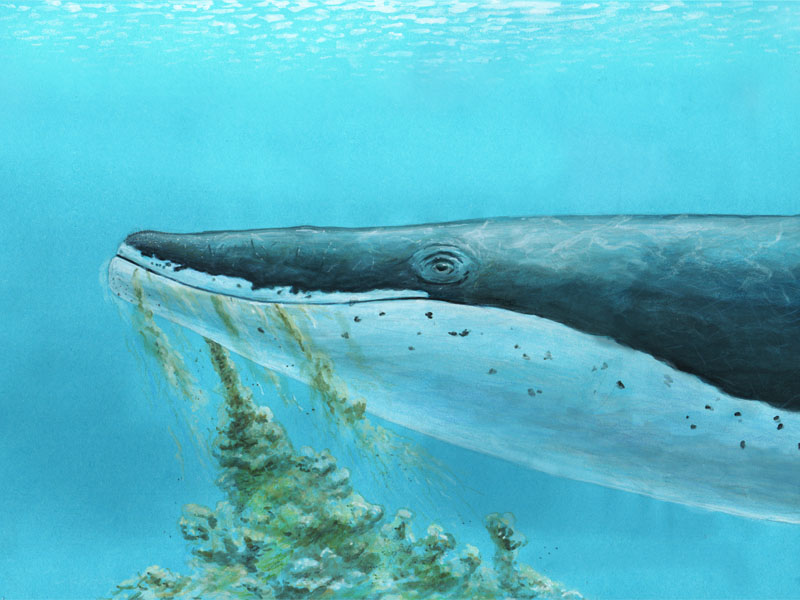 Mystacodon, one of the earliest mysticetes, seen here using its teeth to strain food from the sediment. Image by Joschua Knüppe.


It’s made of keratin, the same protein that forms hair and fingernails. It grows from gum tissue on the roof of the mouth forming thick plates at the palate. Descending from the palate, it quickly separates and frays forming long, stiff, hair-like bristles that hang like curtains. Interestingly, baleen plates aren’t teeth, as baleen whales actually have teeth that grow and then disappear while still in the womb. Baleen later grows in the same location as the former tooth row and is fed by the same nerves and blood vessels.

Mysticetes feed by widely opening their mouths, drawing back their tongues and gulping in large amounts of water. They then close their mouths, pushing the huge volume of water out through the baleen, using it as a sieve for trapping food.

In addition to baleen, all living baleen whales have a number of other anatomical features that allow for efficient filter-feeding. The skulls have a U-shaped outline when seen from above, increasing the size of the mouth and letting more water and food than their narrow-mouthed ancestors. The lower jaws also have a loose joint that lets the mouth gape even wider, drawing in yet more water and food. A subgroup called the rorquals, which includes the blue whale, goes a step further having pleated throat skin that expands during feeding and holds even more water before filtering everything through baleen.

Baleen whales are filter-feeders, but they're not passive grazers of whatever drifts by like they're hundred ton barnacles. Some baleen whales skim concentrations of plankton near the surface, and many are active and efficient predators of schooling marine organisms. They're famously consumers of krill — incredibly abundant free-swimming crustaceans that look quite like small shrimp — but most baleen whales also consume schooling fish. Some even hunt cooperatively—surrounding schools of krill or fish with a curtain of bubbles, then moving in to attack the trapped and frightened prey. 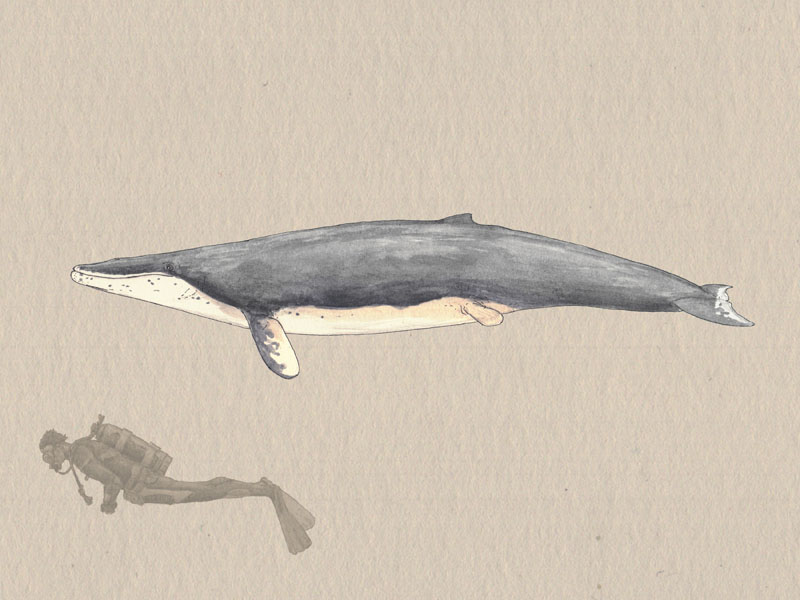 Mystacodon, an early baleen whale known to have had teeth. Image by Joschua Knüppe.


Two new toothed mysticetes named in 2017 help bridge the anatomical gap between archaic hunters and the living giants. They were Mystacodon selenensis from 36-million-year-old rocks in Peru and Coronodon havensteini, known from 29-million-year-old rocks in South Carolina, USA. Both are among the oldest mysticetes known, and both retain jaws lined with teeth without any sign of baleen.

These early mysticetes looked superficially like dolphins and were smaller than any living mysticetes, with Mystacodon measuring about 4 meters (13 feet) and Coronodon just 4.9 meters (16 feet).

Coronodon has well-preserved teeth that have many cusps making them look like hands or crowns. In fact, the name Coronodon means “crown tooth.” The teeth are tightly packed and when the jaws were closed, the upper and lower teeth left only small gaps for water to pass through, effectively using the teeth to filter out food. Robert Boesenecker, an author on the paper describing Coronodon, spoke to Earth Archives, “Coronodon used tooth-based filtration without the aid of baleen. Water could pass through the interdental slots and between gaps in the upper and lower teeth.”

Mystacodon’s teeth show strange wear patterns, with grooves near the base running front to back. The paleontologists who described the species thought they were caused by shells, grit, and gravel rushing past the teeth. This would have been caused by the whale quickly drawing its tongue back sucking food, and possibly sediment, into its mouth, then pushing it back past the teeth. 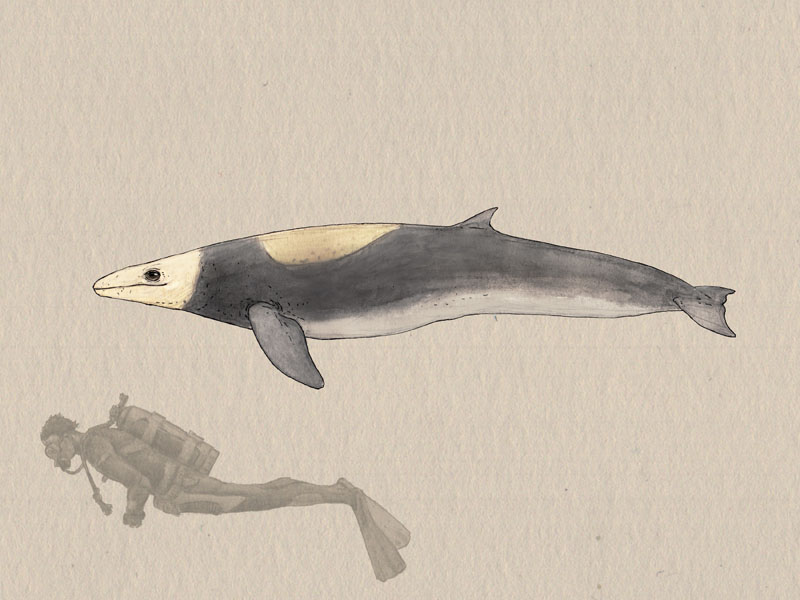 Janjucetus hunted its prey by piercing them. Image by Joschua Knüppe.


Not long after they first emerged, toothed mysticetes flourished around the world experimenting with a number of body types and feeding styles. They include a group called the mammalodontids known from 24-28 million-year-old rocks of the South Pacific, and another called the aetiocetids known from 17-33 million-year-old rocks of the North Pacific. Both families retain teeth but used them in a number of different ways.

Boessenecker said, “Other toothed mysticetes have tooth wear more consistent with archaeocete-like raptorial pierce feeding (e.g. Janjucetus); the tiny Mammalodon has extreme tooth wear indicating ingestion of sediment and has been interpreted (I think correctly) as a benthic suction feeder. Aetiocetids are more problematic, but have been interpreted either as being suction feeders lacking baleen and having enlarged gums.” An alternative and contradictory hypothesis suggest that aetiocetids had teeth and baleen at the same time. 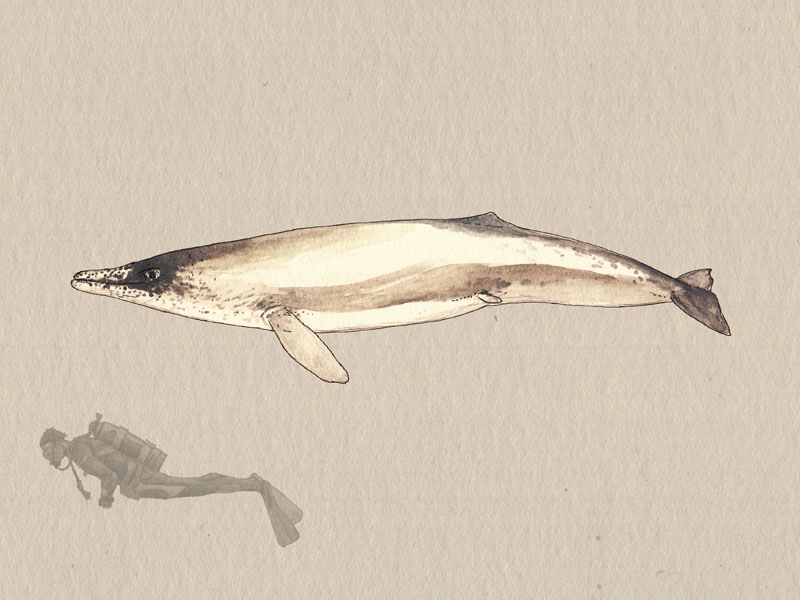 Aetiocetus, the namesake of the aetiocetid group. Image by Joschua Knüppe.


Some aetiocetids had anatomical details on the palate that suggest the presence of baleen inside the tooth row filling gaps between teeth, but that isn’t universally accepted. The earliest whales that certainly have baleen are the eomysticetids, known from 22-30 million-year-old rocks worldwide. Eomysticetids retained teeth at the tips of their jaws, but the back and middle portion of the upper jaws were filled with baleen. Baleen may have been derived from keratinized gum tissue, similar to the pseudoteeth found in Dall’s porpoise.

The rapid evolution and emergence of different feeding styles in archaic mysticetes was driven by experimentation with methods for filter feeding, from suction and filtering with teeth, to the living baleen whales. Speaking about the transition from early predatory whales to living baleen whales, Boessenecker said, “The most crucial aspect of the . . . transition is the diversification of feeding morphologies (and interpreted feeding behaviors). Nearly all basilosaurids have a nearly identical feeding apparatus with teeth that are slight variations on the same theme.” 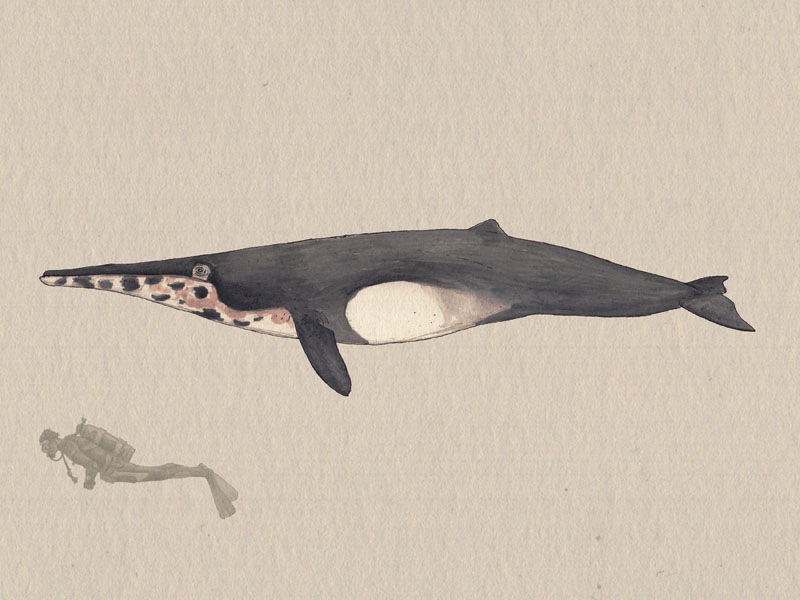 Eomysticetids like Tokarahia are the earliest whales that definitely had baleen. Image by Joschua Knüppe.


“Within toothed mysticetes, however, things change.” Their snouts became longer, wider, and flatter, and the size, shape, arrangement, and texture of the teeth varied widely. Different lineages of toothed mysticetes had radically different feeding anatomies, and these differences only increased over time. Boessenecker said, “The three modern families of baleen whales all have disparate feeding morphologies and behaviors, with some slight overlap - carrying on the diverse feeding ecologies inherited during the initial Oligocene radiation.”

Up to this point in the story, all the fossil species of baleen whales have been relatively small, with most between 3 and 10 meters (10 to 33 feet) in total length; about the same size as many living dolphins and beaked whales, and a marked contrast to the enormous living mysticetes. 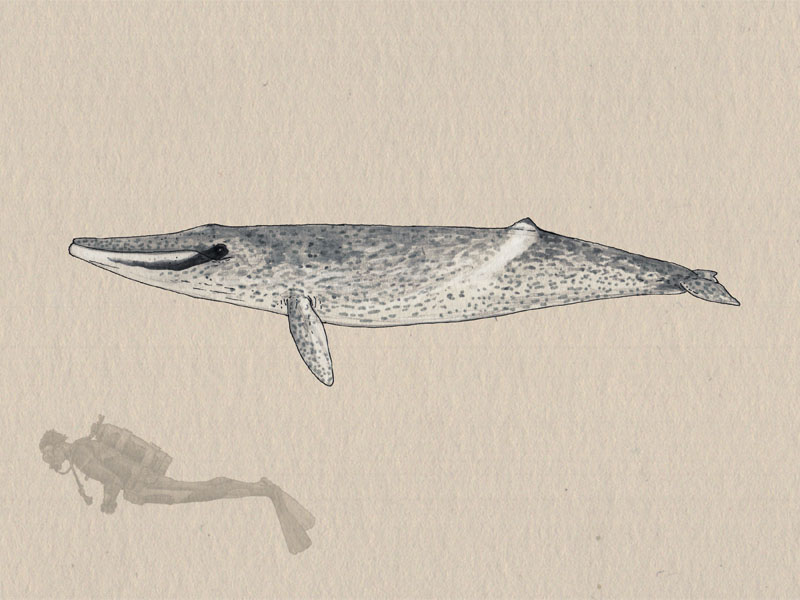 Piscobalaena was a small member of the cetotherids, a once abundant family with a single living member, the pygmy right whale. Image by Joschua Knüppe.

Since the most recent ancestors of living mysticetes first emerged about 20 million years ago, this means each lineage rapidly grew to enormous sizes independently, and more importantly, simultaneously. Slater and colleagues suggest that this sudden increase in size is linked to changing wind patterns in the last few million years. These changing winds allowed nutrients in the deep ocean to move to the surface, greatly increasing the number of prey items. Abundant food allowed baleen whales to become true masters of the sea.

Baleen whales are the largest animals ever to live, but their evolutionary history may the most interesting thing about them. Although living baleen whales are the products of numerous evolutionary steps leading from early hunters to giant filter feeders, it was not a direct trajectory. Mysticete evolution had many twists and turns, with a great variety of anatomical experimentation. Further finds will add to our knowledge of feeding styles and ancient ocean ecosystems, as well as fill in gaps in our knowledge of their anatomy and evolution.