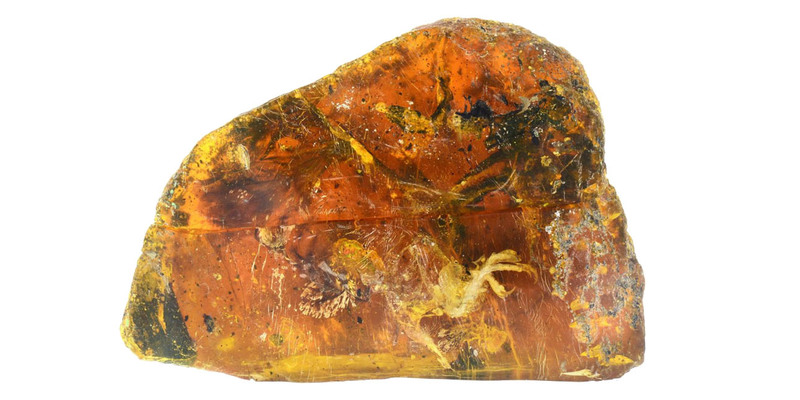 All Posts
A nugget of amber from Myanmar has been found with a nearly complete baby bird inside. The specimen is one of the several recently discovered amber nuggets with entombed body parts of feathered dinosaurs.

Paleontologists Lida Xing and colleagues announced the discovery of one of the most amazing fossil specimens yet known: a baby bird preserved in a nugget of amber. The amber specimen, about the size of half of an avocado, allows details of the bird's anatomy to be seen in extraordinary detail and in three dimensions, something no other fossil specimen have shown.

Rocks deposited in the middle portion of the Cretaceous Period from Myanmar (formerly called Burma) are famous for their numerous large amber specimens. This amber is important for the gem and jewelry industry, and many scientifically important amber specimens have been discovered in amber markets. Amber is formed when tree sap is buried in sediment. Over millions of years, the sap hardens and can frequently contain parts of plants and insects. On rare occasions, amber can preserve portions of larger animals, as in this case.

The baby bird preserved within the nugget of amber is about the same size as a chickadee, with the head, neck, wings, legs, and tail found within the specimen. The entire body was probably originally trapped in sap, but the torso was lost to decomposition before it was fossilized. 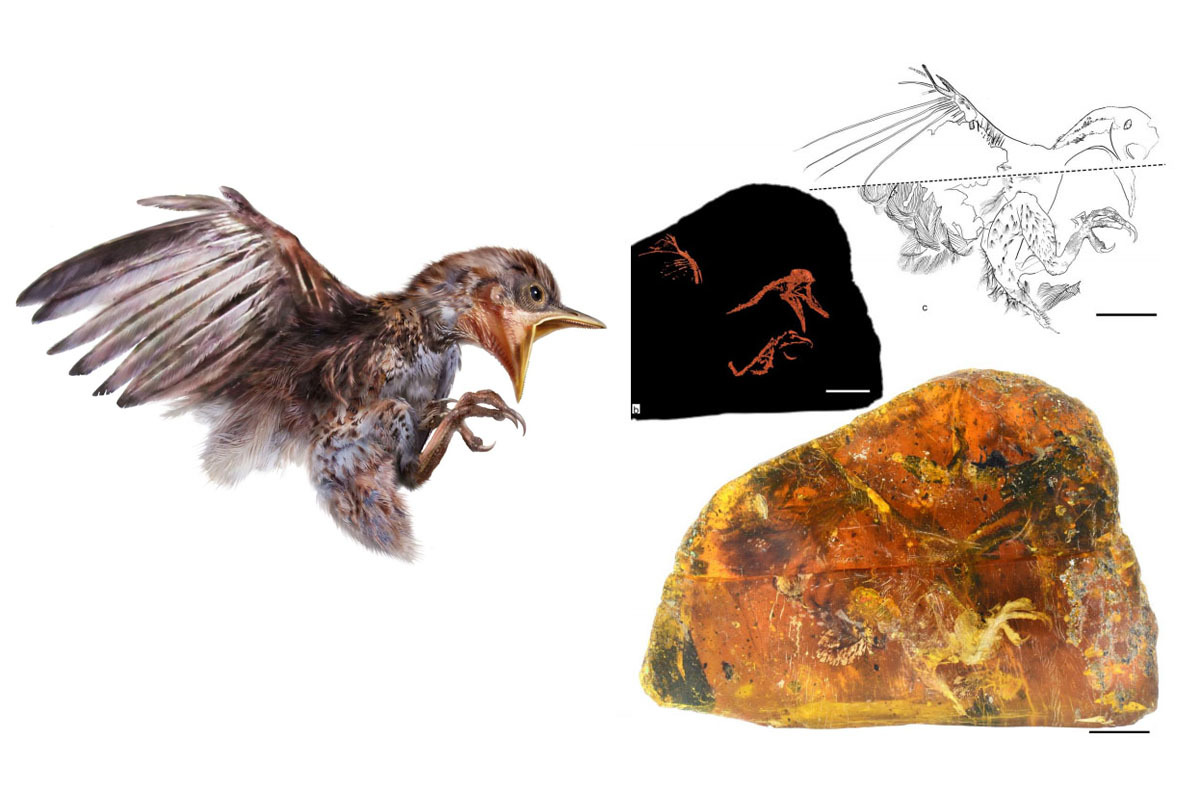 A reconstruction of what the bird would've looked like before fossilization.
Illustration by Chung-Tat Cheung / photograph by Ming Bai, Chinese Academy of Sciences 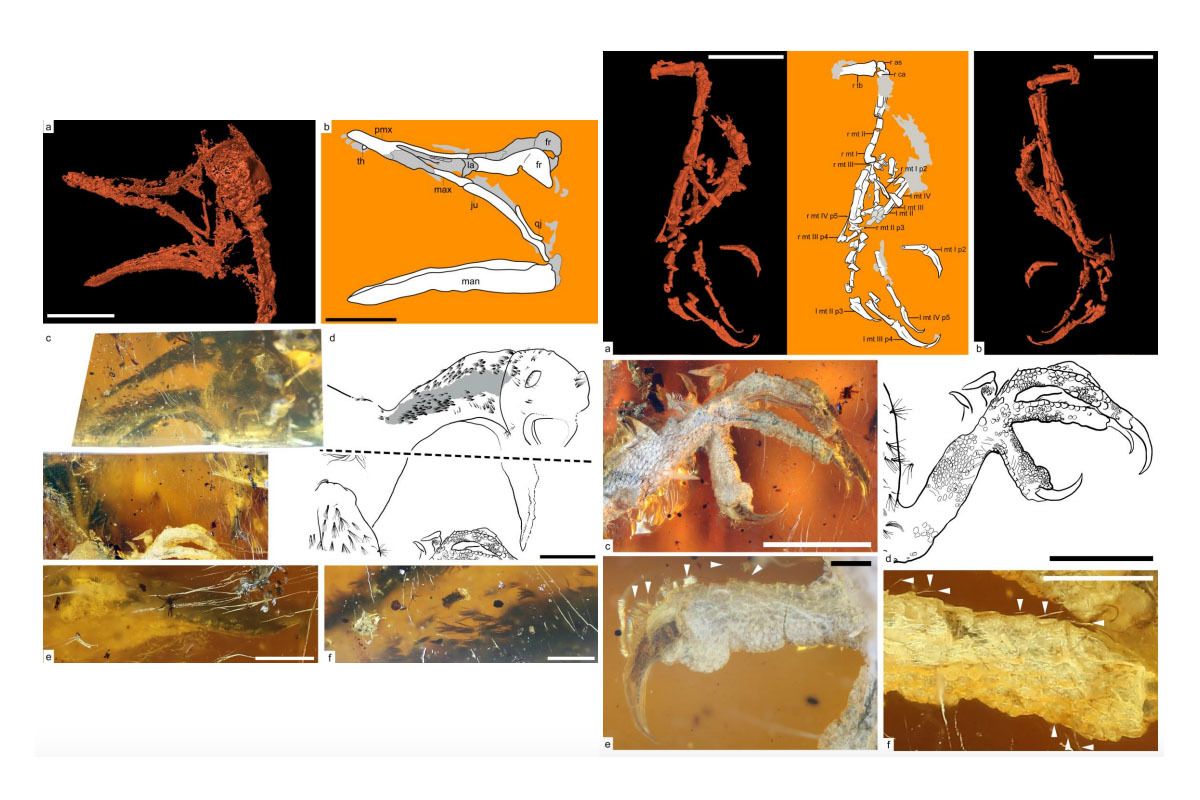 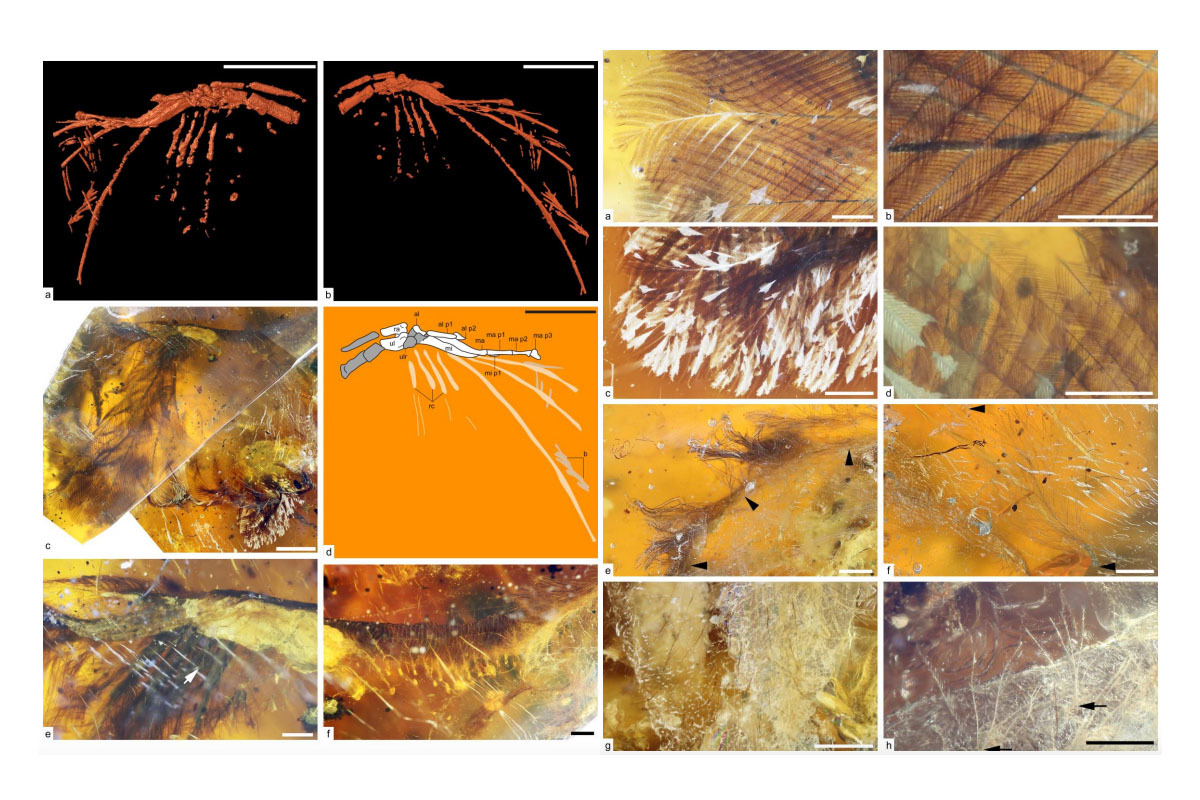 The head has skin present on the snout, possibly indicating a beak, and has closed eyelids covering large bulbous eyes. Most of the rest of the head and neck are covered in feathers that resemble the contour feathers of living birds. The wings show unusually mature flight feathers for a bird of its age, and each finger retains a small claw. The feet are covered in fine, rounded scales preserved in great detail. Unlike living birds, the tail doesn't bear a fan of feathers but instead had two long ribbon-like feathers trailing behind.

Xing and colleagues point out that this unique tail is found in enantiornithines, a large and diverse group of birds that dominated the Cretaceous. Enantiornithines were an early lineage of birds that retained teeth and clawed fingers, setting them apart from modern birds. They filled similar ecological roles as a large number of living birds, ranging from songbirds to birds of prey. Enantiornithines are known from hundreds of specimens, including a large number of young specimens, that all show early development of flight feathers meaning that enantiornithines were independent at very young ages.

This specimen is one of the most complete and well-preserved bird fossils known, and will surely become an anatomical benchmark for Cretaceous birds. This is the fourth specimen of a bird or dinosaur partially entrapped in Burmese amber described in the last few years, the others being two bird wings, and a feathered dinosaur tail. The pace of discovery has increased dramatically, and we can only speculate on what incredible thing will be discovered next.