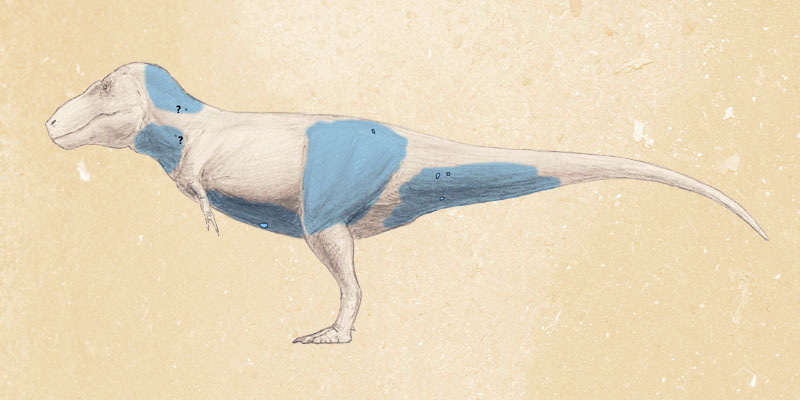 Is the tyrannosaur feather debate really over?

over 3 years ago by Meig Dickson

All Posts
There is something about dinosaurs that inspires sensational news stories. It’s not uncommon to see a trove of articles coming out about whether or not Tyrannosaurus and its relatives had feathers or scales. The problem with these articles is that they are claiming a lot more certainty about Tyrannosaurus than what we actually know.

They were very oversimplified in tone: claiming such things as “Jurassic Park wasn’t wrong,” neglecting to comment on the nuance of the various problems in the movie, such as the T. rex itself having off proportions in the head and incorrectly postured arms, and the Velociraptors not being small and entirely feathered. In addition, they commented on how Tyrannosaurus was no longer “lame” - truly, the paradigm of unbiased news reporting.

Such controversies were sparked by a paper by Phil Bell and colleagues in Biology Letters. In it, the researchers claimed that Tyrannosaurus and its relatives, collectively known as Tyrannosaurids, did not have feathers.

This conclusion was the result of examining skin impressions, which appeared pebble-like and scaly, and covered small areas of space on the animal (depicted above - with the neck patches separate, due to lack of certainty as to their placement). They were only a few centimeters long, on animals that were up to 12 meters (40 feet) long. These spots came from portions of the neck, tail, belly, and illium – the hip of the animal. Although the paper discussed these scales, it was also not particularly forthcoming on where they came from, specifically. For example, though it states that scales came from the neck of a tyrannosaur, it does not state whether those scales were from the top, bottom, or sides of the neck. 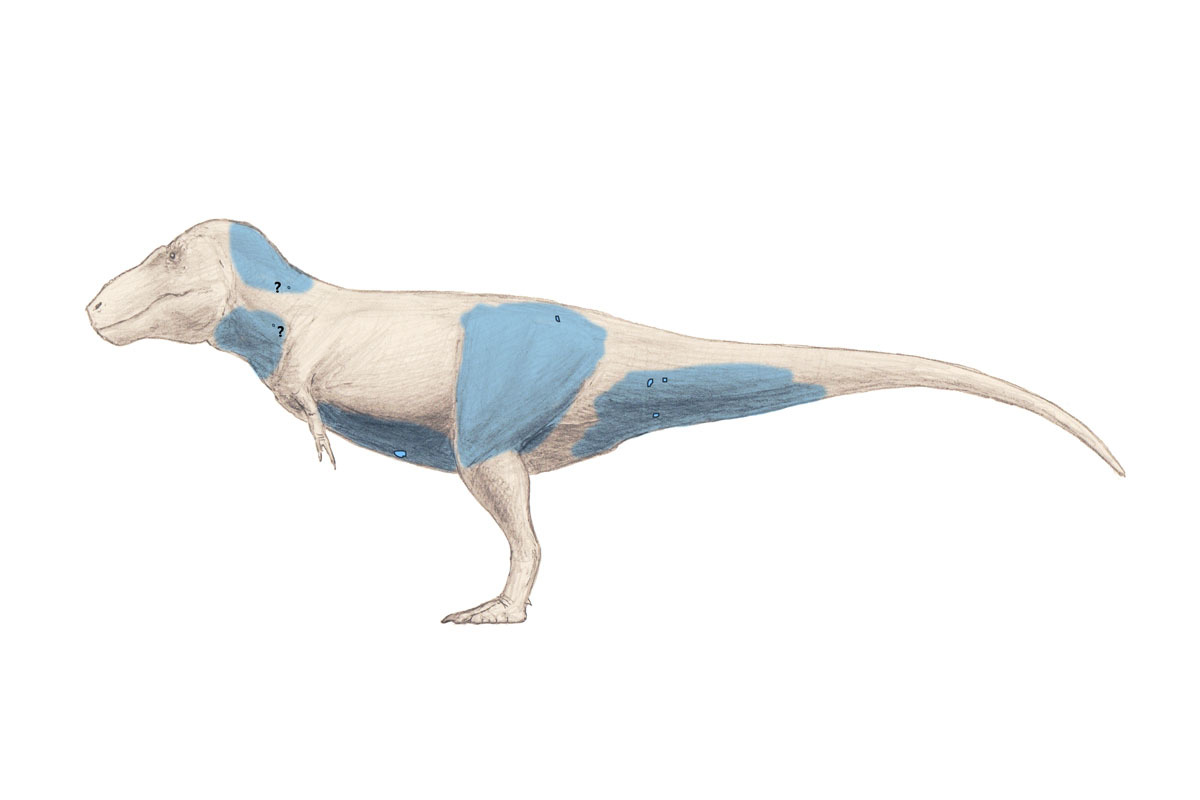 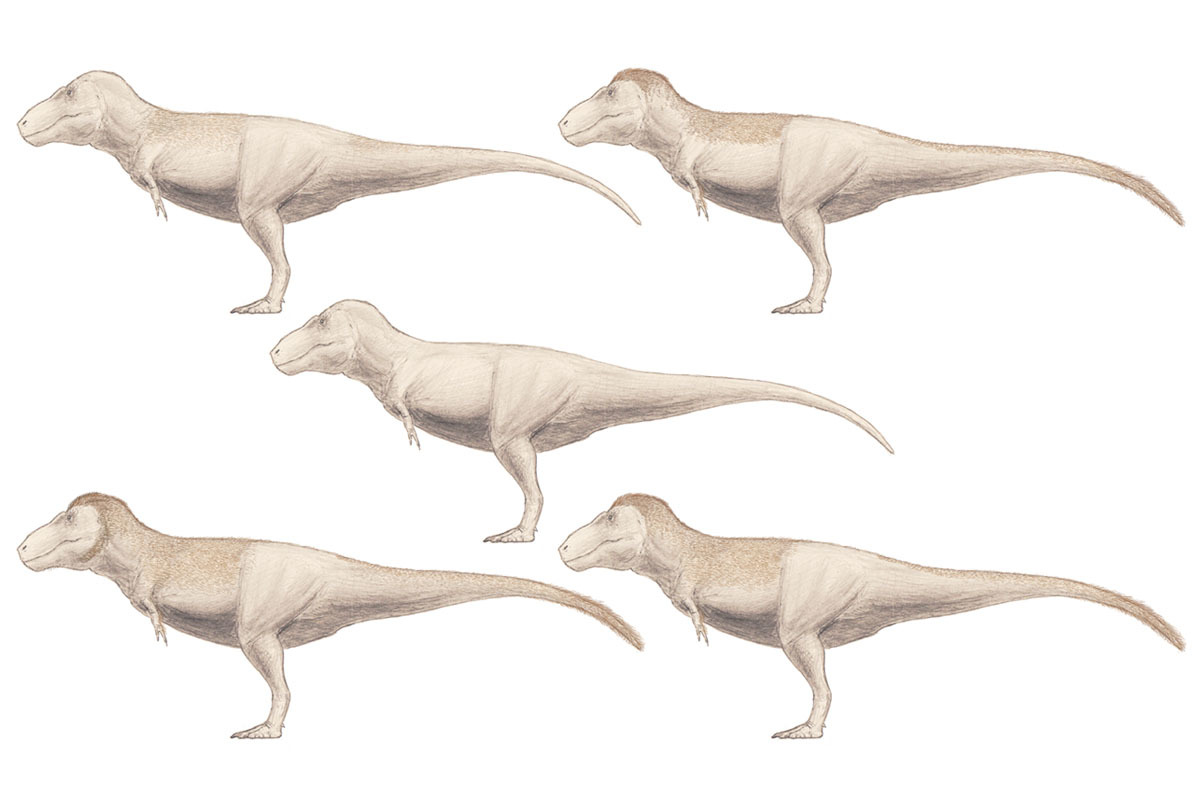 An analysis was then conducted utilizing these patches, as well as the known feathers from other members of the tyrannosaur lineage such as Yutyrannus. This statistical analysis found that they were decidedly scaly, and became as such over 100 million years ago.

However, this doesn’t mean that the analysis is universally accepted by paleontologists. In the paper, the authors argued that although feathers and scales might exist on the same animal, they consider it unlikely in tyrannosaurs. We know, however, from both extinct animals and extant ones, that this isn’t always true: Anchiornis, Juravenator, the 99-million year old baby bird found in amber, and many modern birds often have feathers and scales within the same tissue, with feathers in between scales, sometimes extensively.

This was a significant oversight of the analysis, as stated by paleontologist and science communicator Thomas Holtz, “Beyond the descriptive elements, though, there are technical issues I have with the analyses. For one, their maximum likelihood analysis seeks to determine the ancestral integumentary state for different parts of the tyrannosaur tree. However, they treat scales, fuzz, feathers, and so forth as different states of the same character. Under this method, an individual cannot simultaneously have scales and fuzz, for instance. But of course, our observation of living birds and of dinosaurs where we have broad integumentary coverage (Juravenator, Kulindadromeus, etc.) shows us you can have both on the same individual at the same time. Instead, I think treating these as separate characters and estimating the maximum likelihood of ancestral states on the tree one-by-one would be a fairer representation of the biology.”

Tyrannosaur researcher Steve Brusatte echoed Holtz, “What I take some issue with is the assertion that, just because we have found some skin impressions for T. rex and other big tyrannosaurs, this means they couldn't have been feathered. Like it's either or—an animal can only have skin or feathers. That's not true, just look at birds today. Lots of feathers, but scales on their feet. And also, just because we don't find feathers fossilized, it doesn't mean they weren't there. They are so hard to preserve that you need exceptional circumstances.”

Having scales where other animals have feathers does not automatically mean that the entire animal is scaly. The scales might not even be scales – taphonomy, or how the fossils were preserved, was not well examined in the paper, and should be a subject of inquiry for researchers going forward.

This was also a concern that Holtz mentioned to Earth Archives, “Also, I would have been much more interested in seeing a discussion about the modes of preservation and the role of sedimentology in this (and, to be fair, pretty much every) study of integument in fossil animals. The Hell Creek and Dinosaur Park Formations are not the same as the Yixian, and we shouldn't expect them to be able to record information in the same way. In fact, given the general lack of fur impressions in mudstones, siltstones, and sandstone (the lithologies of the Hell Creek and the like) in Cenozoic units, it might well be that soft pliant hair and dinosaurian fuzz is taphonomically invisible in these rock types.”

There are also other unanswered questions for this proposed phenomenon. Yutyrannus, a known feathered tyrannosaur, probably weighed over one tonne; had an extensive feathery covering on its body. It lived alongside the sheep-sized Psittacosaurus, which had quills – possibly modified protofeathers – but was mostly scaly. If large tyrannosaurs lost their feathers to regulate heat then why did Yutyrannus have feathers, and Psittacosaurus (for all intents and purposes) did not?

“I find the idea of sparsely feathered (or even non-feathered) T. rex to be entirely plausible. We know its ancestors had simple hair-like protofeathers, but T. rex (and its closest cousins) were so big that they could have lost their feathers to stop from overheating, for example, just as elephants have reduced their coat of hair,” said Brusatte.

Despite all the uncertainty, this doesn’t mean that the study itself does not present us with new information. Bell and colleagues described then patches of skin in detail for the first time. Rumors of these scale patches had been going around for ages, and most depictions of feathered Tyrannosaurus had extensive scaly portions of the body in the places where scales were found anyway.

“It is very good to see this material (finally) published in the scientific literature. Some of the specimens of skin impressions were on display in museums decades ago, so it is nice to have them in a format that is accessible to the community worldwide… Overall, I was impressed by the paper, and the authors were suitably cautious in their writing,” added Holtz.

With the caution of Bell and colleagues, one would expect science journalists to be unbiased, presenting the paper which admits itself that T. rex integument is still largely ambiguous. And yet, they do not. This is, sadly, the main way the public interacts with science to form an opinion.

“The authors of the paper were nuanced in their arguments, but the press coverage missed the fine print, in most cases,” Brusatte closed.

Regarding this issue, Holtz added,“The science journalists (and even worse, the headline writers), [were not very cautious]... The desire for individual studies to be "slam dunk" or "Rosetta Stone" discoveries that confirm an idea for all time to come is strong in science communications but doesn't reflect the actual ambiguity and uncertainty of nearly all scientific analyses. So the cautious statements of the original authors were generally ignored, and most journalists stated it as saying "Tyrannosaurus was only scaly over 100% of its body"."

Furthermore, there was a "gotcha" element or "look, all our childhood ideas ARE true" factor in a lot of news items. In the end, this is probably attributable to the fact that Tyrannosaurus is, for the public, not a real animal – but a monster they’ve created in their heads. But that’s just conjecture.

What is objective truth is that it’s important to remember that it doesn’t matter if Tyrannosaurus was mainly feathered or mainly scaled. It still would have been a large creature that you would be afraid of, that would have acted and appeared more like a bird than a crocodile. And honestly, who wouldn’t run away from a screaming goose? It is important that we break away from the narrative that feathers – and the inherent bird-like nature of Tyrannosaurus – “ruin” the animal.

As Holtz said in his statement, “When you work with fossil material, one most always be ready to accept that there is ambiguity and uncertainty.”

It’s time to give back Tyrannosaurus its reality, rather than keep it as the monster we’ve idolized in popular culture.