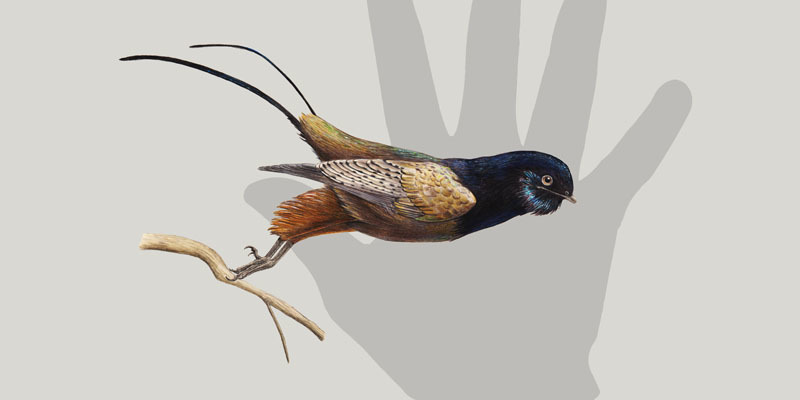 All Posts
A 120-million-year-old fossil bird specimen has been discovered in Lower Cretaceous rocks of northeastern China with traces of the original feather pigments. Analysis of the feathers and comparison to modern birds indicates that this bird was largely iridescent on its head, neck, and body.

The Jiufotang Formation deposited in Liaoning Province, northeastern China, is a well-studied Lower Cretaceous rock formation that holds a huge number of exceptionally preserved fossils. The Jiufotang is made up largely of sediments deposited in lake beds interspersed with volcanic ash. The Jiufotang and underlying Yixian Formation make up the famous Jehol Biota, known for its feathered dinosaurs including Sinosauropteryx, Yutyrannus, and thousands of bird specimens. The Jiufotang and Yixian Formations are a type of fossiliferous deposit known as a lagerstätte, meaning that they regularly preserve fossils in great detail.

A fossil bird specimen has recently been described by paleontologists Jennifer A. Peteya, Julia A. Clarke, Quanguo Li, Ke-Qin Gao, and Matthew D. Shawkey. The specimen itself is articulated and well-preserved, consisting of the majority of the skeleton and feathers preserved on the main slab and counterpart slab. Like many Mesozoic birds, it retains teeth, and hand claws, and lacks tail feathers that form a fan but instead had two stiff ribbon-like tail feathers. The skeleton's length is approximately 14 cm (5 inches) long, with a wingspan of 35-40 cm (14-16 inches), making it roughly the same size as a Common Starling.

Detailed examination of the skeleton indicates that it is a member of the bohaiornithid family. Bohaiornithids are known from several species, but appear to be limited in time and space to the Early Cretaceous of China. They are characterized by somewhat broad snouts with recurved teeth, and long foot claws. They are also considered to be predators of invertebrates and small vertebrates. Bohaiornithids are part of the enantiornithine radiation, the most common bird group throughout the Cretaceous. Enantiornithines are characterized by details of the shoulder and skeletal fusion, and most lack tail feather fans, but have the long ribbon-like tail feathers that are seen in this specimen. Enantiornithines, like most dinosaurs, went extinct at the end of the Cretaceous. Although the specimen is clearly a bohaiornithid, it isn't fully grown, so the authors declined to assign it to any known species, nor name a new species for the specimen. 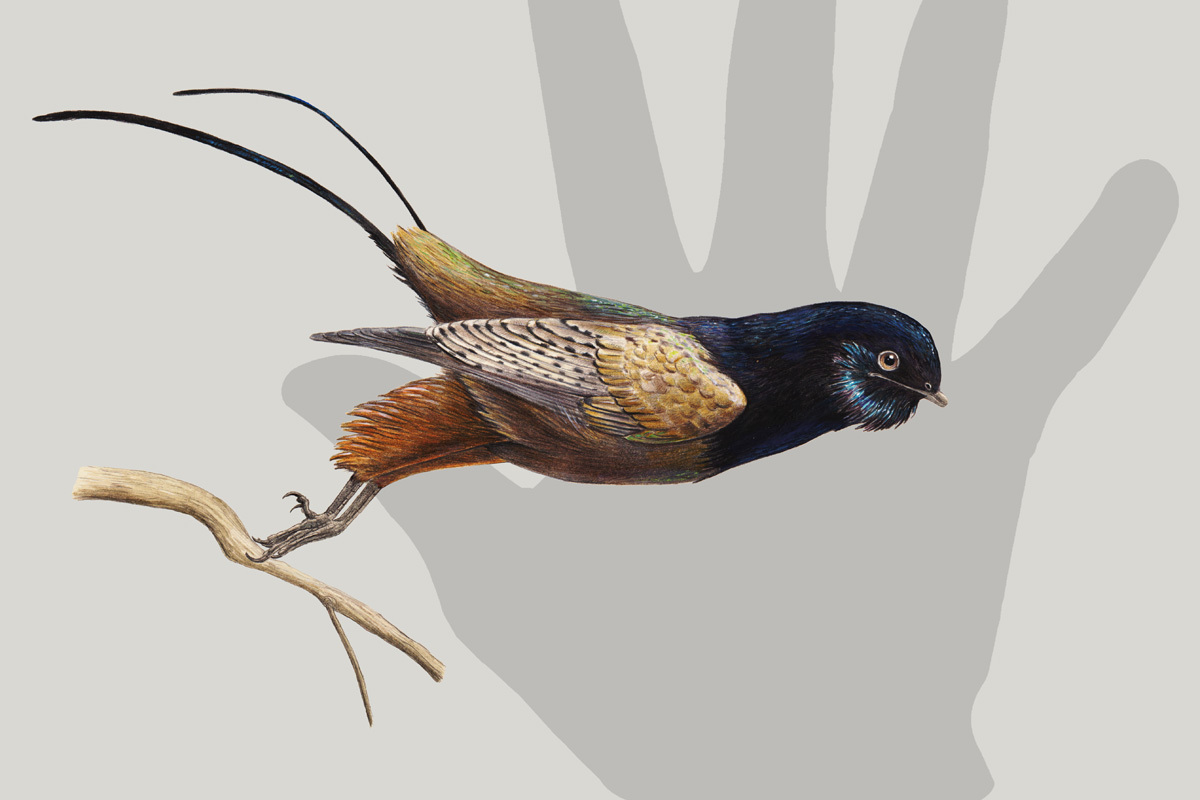 A particular focus of the researchers was the exceptionally preserved feathers found with the specimen. Until the last decade or so, it was regarded as a truism in paleontology that the coloration of fossil organisms could not and would not ever be determined. Recent research however has shown that many extraordinarily preserved specimens retain their original pigments, allowing paleontologists to reconstruct the life coloration of animals extinct for millions of years. In living animals, coloration is created by way of special sausage-shaped organelles called melanosomes. Melanosomes are present in skin cells, as well as hair and feathers. Different colors are made by melanosome of different shapes, as well as, in birds, the structure of the feather itself.

Peteya and colleagues employed two two types of microscopes to identify the presence of melanosomes, as well as determine the associated color. Tiny pieces of preserved feathers were removed from the specimen near the head, neck, wing, and body. Additionally, portions of matrix were also removed and tested. The researchers first examined the removed sections with a scanning electron microscope (SEM) to determine the presence and physical structure of the melanosomes present. Then, they examined the feather fragments using Raman spectroscopy, which uses lasers to determine the chemical makeup of the specimens.

The results of the SEM and Raman spectroscopy tests have determined that there are melanosomes present in feathers of the head, neck, and body and the shape is most consistent with iridescence. Additionally, they determined that the feathers preserve both original melanin as well as the β-keratin that made up the feathers in life. Unfortunately, the feathers were too degraded to determine the color of the iridescence, nor any information about the color of the wing feathers.

This specimen was regarded as being sexually mature, but not fully grown. In other enantiorithines, the ribbon-like tail feathers are regarded as display organs, possibly present only in males, therefore this specimen has been considered sexually mature by Peteya and colleagues. Features of the skeleton however, indicate that the individual was not fully grown at the time of its death. This is unlike what's seen in living birds, where they generally reach skeletal maturity before they sexual maturity, but similar to most other dinosaurs which reached sexual maturity before they are fully grown.