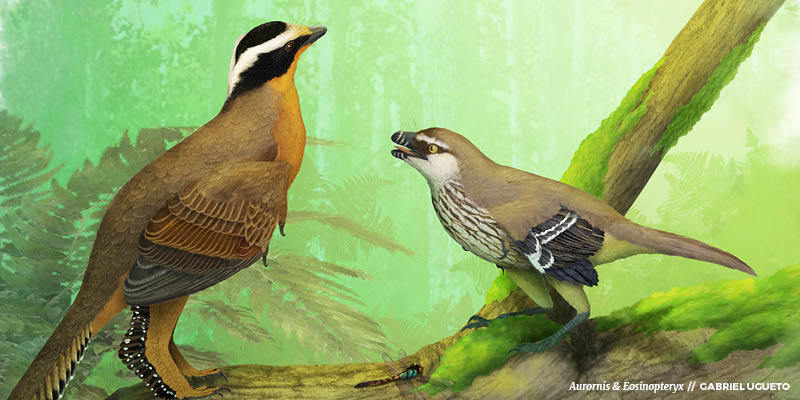 All Posts
Since the 1990s, more and more dinosaur fossils with evidence of feathers have burst onto the scene. But recent discoveries are only the latest salvo in a long list of bombshells linking them to birds.

"Dinosaur” was a word created in the 19th century to define three seemingly monstruous creatures that had recently been unearthed in England. Iguanodon, Megalosaurus and Hylaeosaurus were enormous and different than anything found alive today. These huge reptiles were at first thought to be very big lizards, and were depicted as lumbering, dim-witted and slow-moving beasts. That idea persisted for decades, even though more and more species were being uncovered.

The discovery of a single feather became the first step in the direction of a modern view of dinosaurs and their relationship with birds. In 1861, Archaeopteryx was first described based on a feather found in Germany by paleontologist Hermann von Meyer. But the first skeleton of this “early bird” was found later in the same year. It was a lightweight winged animal with teeth, clawed hands, a long bony tail, bones that were hollow and with feathers all over its body. This mix of avian and reptilian features made some people suggest that Archaeopteryx was something transitional, but its relationship to the dinosaurs wasn’t widely accepted until later. 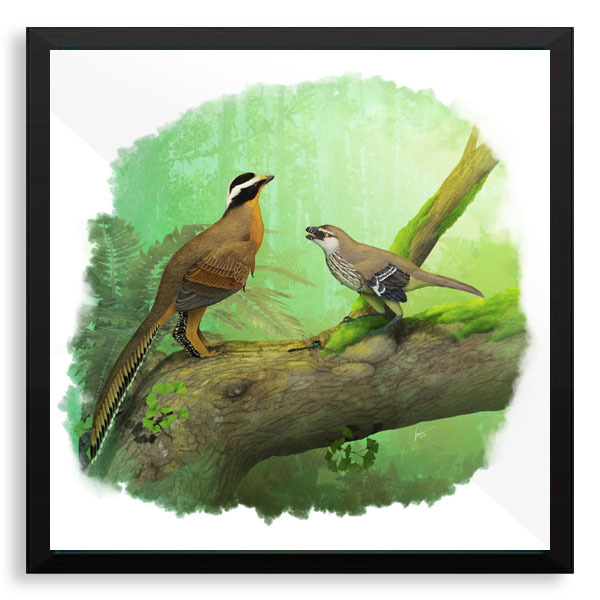 Get this image as a print from 252MYA.com 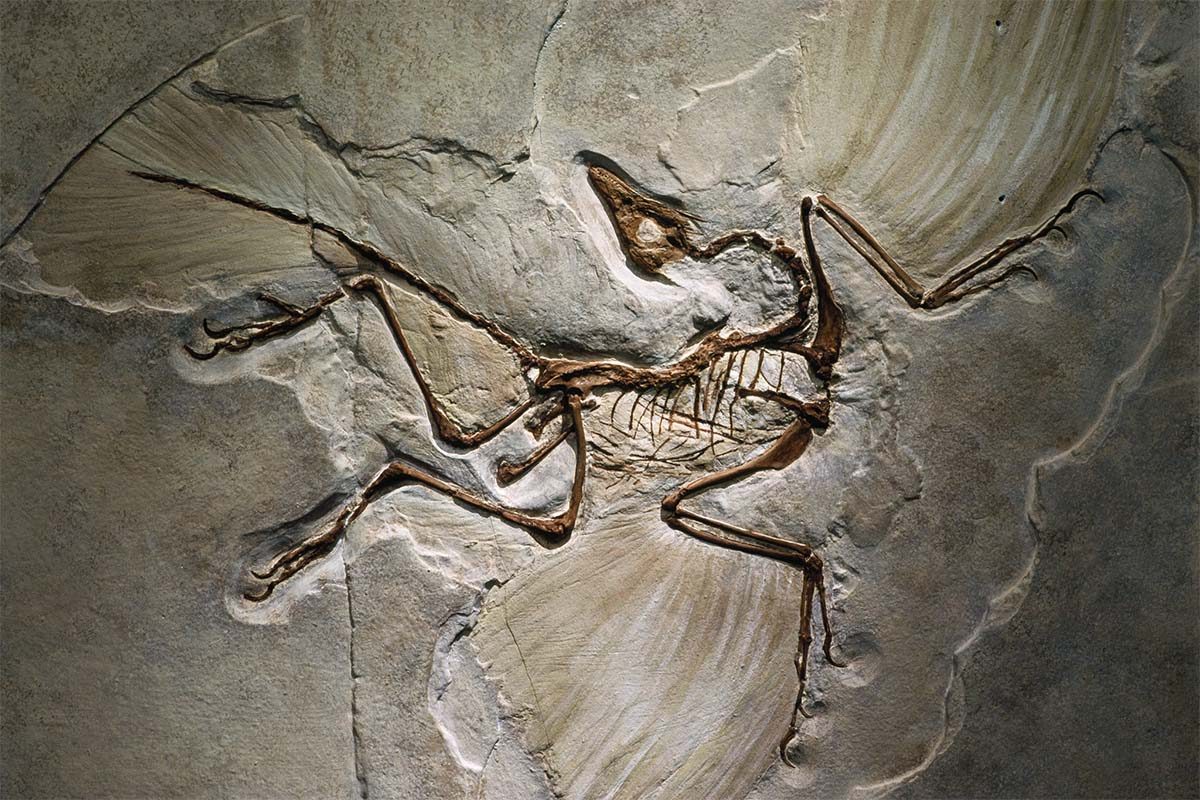 Around the same time, Compsognathus was found in the same German region. This small, nimble dinosaur was quickly compared to Archaeopteryx. It became clear that apart from the apparent absence of feathers and the anatomy of the hand, the two species were incredibly similar.

This prompted the British paleontologist Thomas Henry Huxley, inspired by Charles Darwin’s ideas on evolution, to propose that Archaeopteryx was a missing link between birds and dinosaurs. And even though no feathers had been found on Compsognathus fossils, he believed it could have been feathered due to all the similarities between it and the first bird.

Still, many researchers disagreed, stating that the similarities were just a coincidence. At the time, other potential ancestors of birds were considered, like crocodilians and other extinct reptilian groups. It wasn’t until almost a century later that the general consensus followed Huxley’s suggestion.

The discovery of the famous “raptor” Deinonychus was presented by American paleontologist John Ostrom in 1969. This was the first dinosaur discovered with clear signs of being an agile predator, with long legs and a tail stiffened with tendons for balance while running. It also had almost a hundred anatomical features linking it to birds, including its feet, pubis, neck, wrists, shoulder blades, arms, clavicle and breast bone. This was one of the most important discoveries in the history of paleontology, and it helped consolidate the idea that dinosaurs were warm-blooded and related to birds – a movement that came to be known as the “Dinosaur Renaissance”.

The Dinosaur Renaissance was a revolution in paleontology that happened in the late 1960s, led primarily by Ostrom and his student, Robert T. Bakker. Together with other like-minded scientists, Ostrom and Bakker propagated the idea that dinosaurs were complex creatures that lived active lives akin to modern mammals and birds. Bakker in particular wrote a series of papers, books and articles providing evidence of high metabolism, herd formation and other behaviors that directly opposed the previous view of dinosaurs as reptilian, simple animals. All in all, this period was responsible for a significant shift in how the public viewed dinosaurs. 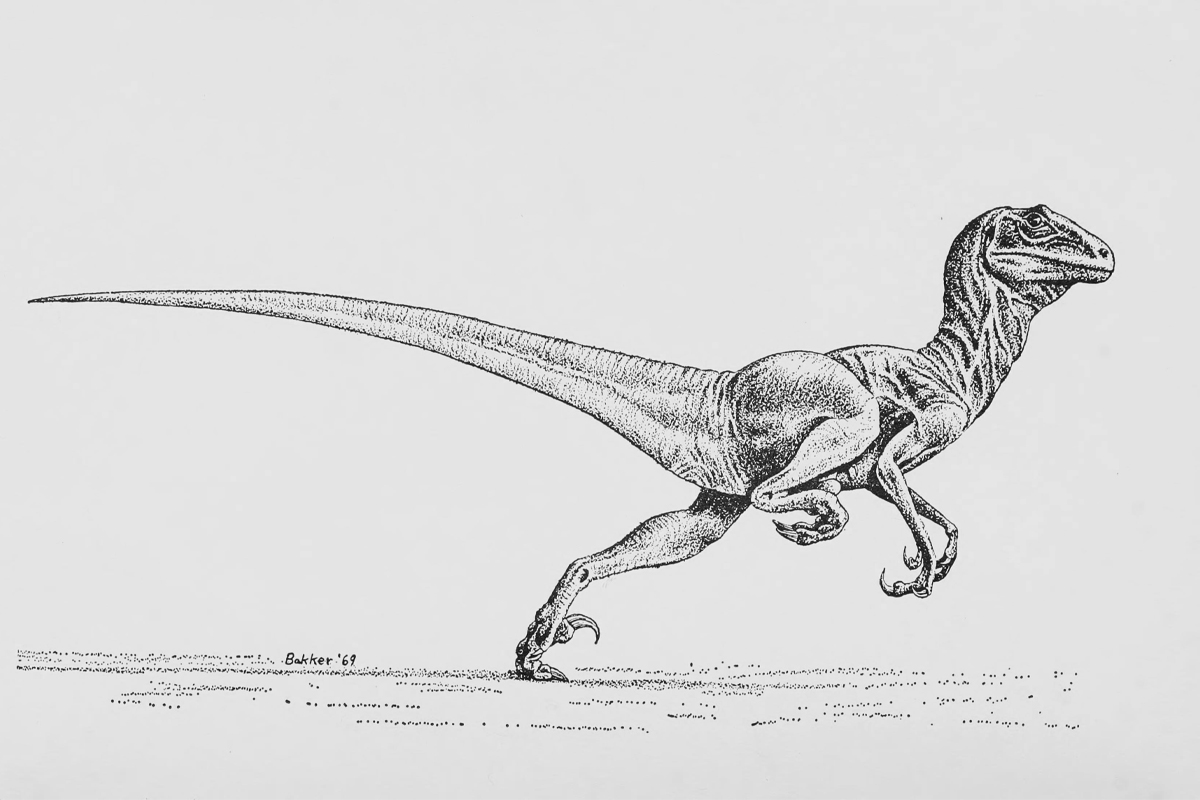 Still, there were no concrete signs of feathers in dinosaur fossils except for Archaeopteryx, and its position in the dinosaur family tree was also being heavily disputed. But, starting in the 1970s, a few pioneering scientists and artists like Gregory S. Paul and Mark Hallet began speculating that some small bird-like dinosaurs could have been feathered, just like Huxley had done with Compsognathus.

It was around the 1980s that the ideas of the Dinosaur Renaissance became the scientific consensus: some small dinosaurs, relatives of Velociraptor and Archaeopteryx, eventually evolved into birds and managed to survive the big extinction. According to the rules of science, birds are therefore dinosaurs too, just like humans are still both apes and primates. To differentiate birds from their extinct relatives, the term “non-avian dinosaur" was coined.

Though many small and bird-like dinosaurs were being found all the time, the idea of feathered dinosaurs was still considered quite far-fetched. Paleontologists did consider birds to be dinosaurs, but anything that wasn’t very clearly a bird was thought of as being scaly, with few exceptions. It seems there was a great gap in the transition of these two groups until 1996, when the first dinosaur fossil with preserved feathers was described: the Chinese Sinosauropteryx. 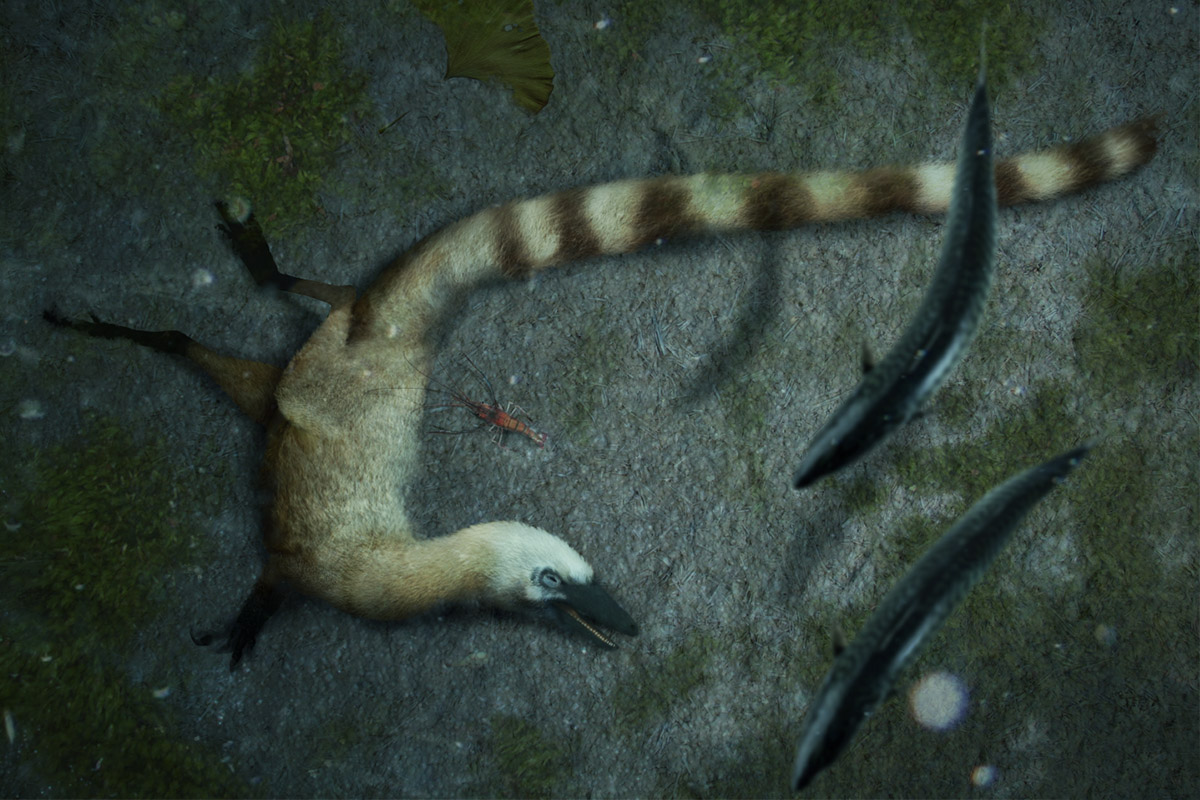 The “Chinese dragon-bird” was the first non-bird species to be found with feather impressions. This relative of Compsognathus was covered in fine filaments that were clearly not modern feathers, but something in-between. Again, the discovery was met with skepticism by some scientists who argued that the impressions could be dislodged collagen fibers (components of some animals’ skins), or remains of a reptilian frill.

Other findings would further support the identity of the impressions as feathers. In 2010, Professor Fucheng Zhang and his team discovered microscopic pigment cells called melanosomes in the original Sinosauropteryx fossil. These cells are responsible for giving birds’ feathers most of their colors. By comparing the structure of the dinosaur’s melanosomes with the ones found in birds today, paleontologists could, for the first time, determine the color of an extinct dinosaur: Sinosauropteryx was mostly reddish-brown, with a lighter underside and a striped tail.

But why was Sinosauropteryx found with feathers, but Compsognathus, its relative, was not? Does that mean that one species was feathered, but the other wasn’t?

The difference is due to the fossil’s state of preservation. Feathers, unlike bones, are easier to degrade or get scattered since they detach from the body when decomposition sets in. That can be seen in several true bird fossils, from the age of dinosaurs or later, which also don’t contain feathers. The result is that, by the time a dinosaur’s remains are covered by sediment and the slow process of fossilization starts, the feathers and other soft tissue like skin, flesh and organs are long gone.

Sinosauropteryx and other dinosaur species discovered later were preserved in very special places called laggerstätten. The German word, which means “place of storage”, is given to sedimentary deposits that contain fossils with exceptional preservation. This is due to a variety of factors, such as being in environments with low oxygen content that slows down bacterial decomposition, or because the fossils were surrounded by substances that help prevent degradation like ice, tar or amber. 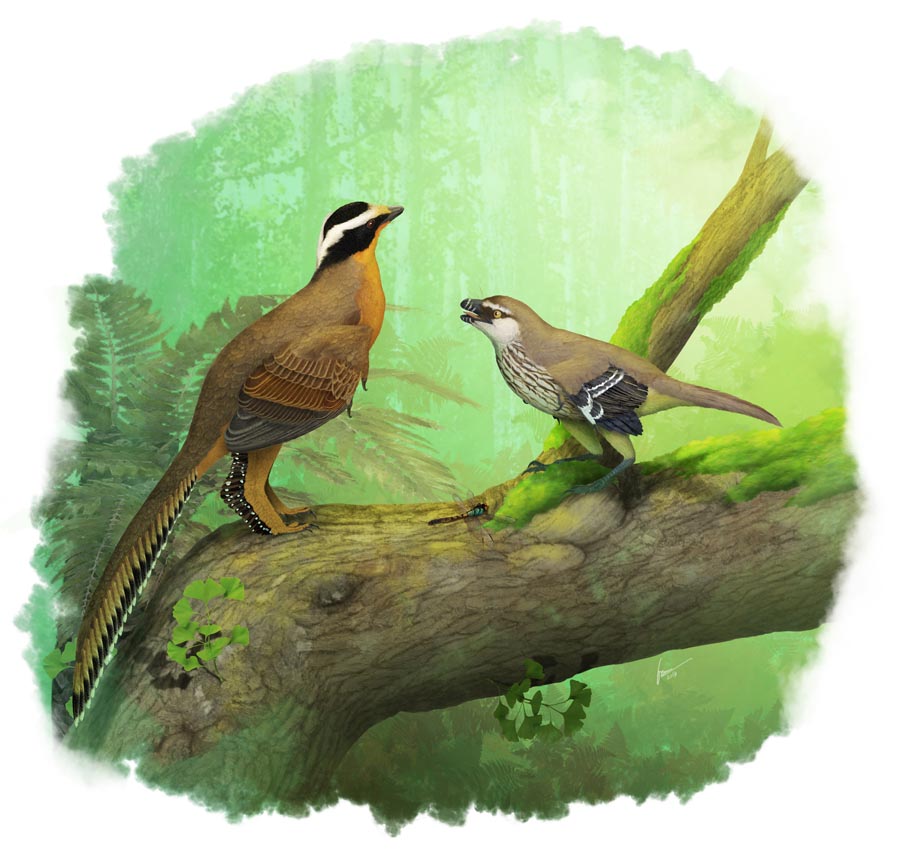 The Chinese province of Liaoning contains some of the most incredible laggerstätten in the world. The deposits are divided into three formations: Tiaojishan, Jiufotang and Yixian, each representing a slightly different piece of time from the Middle Jurassic to the early Cretaceous period. This paleontological treasure chest was found in the 1920s, but all records of fossils discovered there during the Japanese occupation were lost after World War II. It wasn’t until the 1990s that Liaoning was explored again.

Since 1996, a host of other feathered dinosaurs big and small were found in China and other places. Some, like Sinornithosaurus, had feathers covering the entire body including the head up to the tip of the snout. Others, like raven-sized Microraptor, had well-developed wings not only on the arms but also the legs. The 2-meter-long Beipiaosaurus had two different types of feathers creating a shaggy outline, while the 1.5-ton Yutyrannus had feathers even on its feet.

Other species found with feathers or feather-like coverings are much less closely related to birds. Kulindadromeus from Russia had three diferent types of filaments, including ribbon-like structures, covering almost its entire body except for lower legs and tail. The tusked herbivore Tianyulong had long fur-like fuzz at least on its neck, back and tail. And the pig-like Psittacosaurus had a row of stiff bristles on the base of its tail. 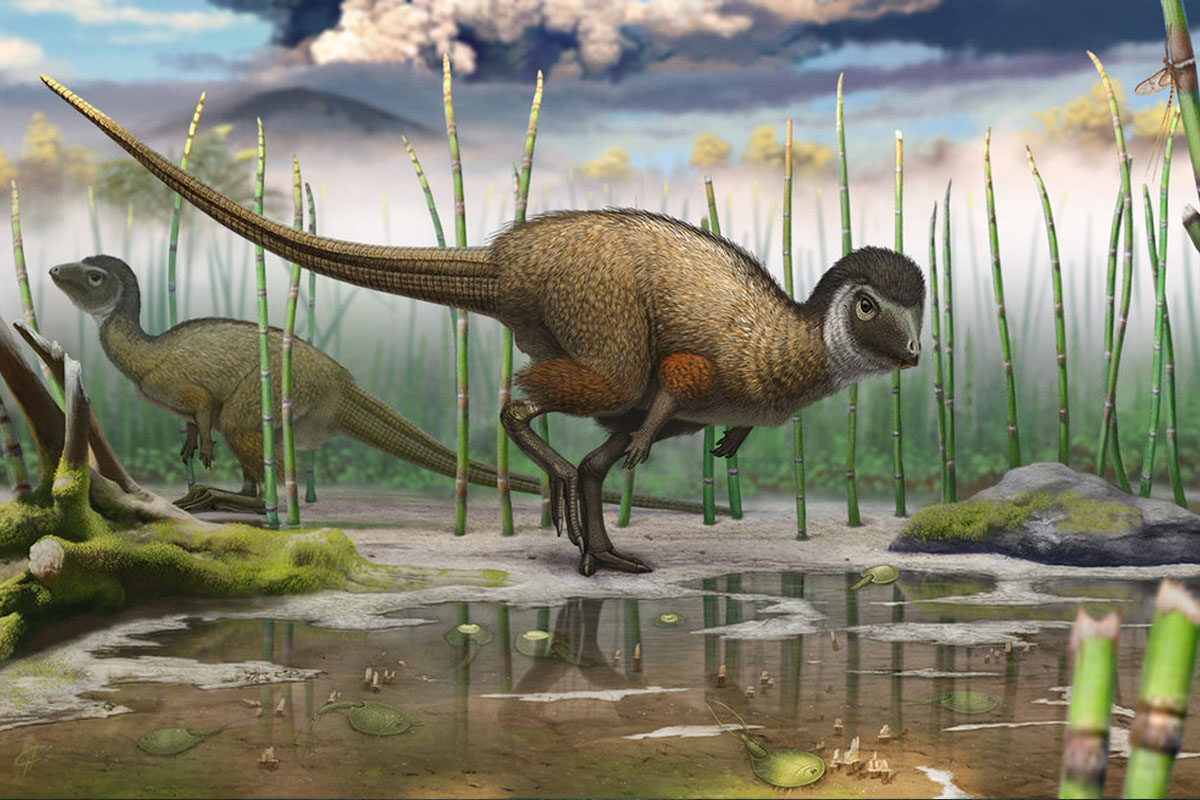 Some indirect pieces of evidence also allow us to determine conclusively the presence of feathers in some non-avian dinosaurs, like the quill knobs found in the famous Velociraptor and the pygostyles of Oviraptor and Deinocheirus. Quill knobs are bony bumps present in the arm bones of some birds like vultures that serve as attachment points for big feathers, and pygostyles are a collection of fused bones at the tip of the tails of birds which also provide support for feather attachment.

These discoveries have shown us a great diversity of feather types. Simple fur-like filaments. Downy feathers as the ones of baby birds. Hollow quills similar to those of a porcupine. Big tail fans like those of pheasants. And the usual feathers that we see in a chicken today. All present in non-avian dinosaurs, some not even belonging to the lineage that gave rise to birds.

We now also know that at first feathers served a lot of functions. They can protect an animal from both cold and heat, aid in courtship rituals and help protect offspring. It was only later that a group of dinosaurs used them for gliding, and then flight. All of this knowledge has made scientists look back on fossils uncovered in the last century and realize that sometimes it’s very likely that feathers were present in an animal even though they’re not preserved in their fossils.

We still don’t know exactly when feathers first appeared, nor if every dinosaur that had feathers owes them to one single fuzzy ancestor. Perhaps the first dinosaurs were already covered in some kind of "fur" like the so-called pycnofibers of the flying pterosaurs, and some families later lost it and became scaly. Or maybe different dinosaur families evolved those structures independently from each other. Many other surprises may be hidden in some laggerstätte, waiting to be found and change what we currently think. 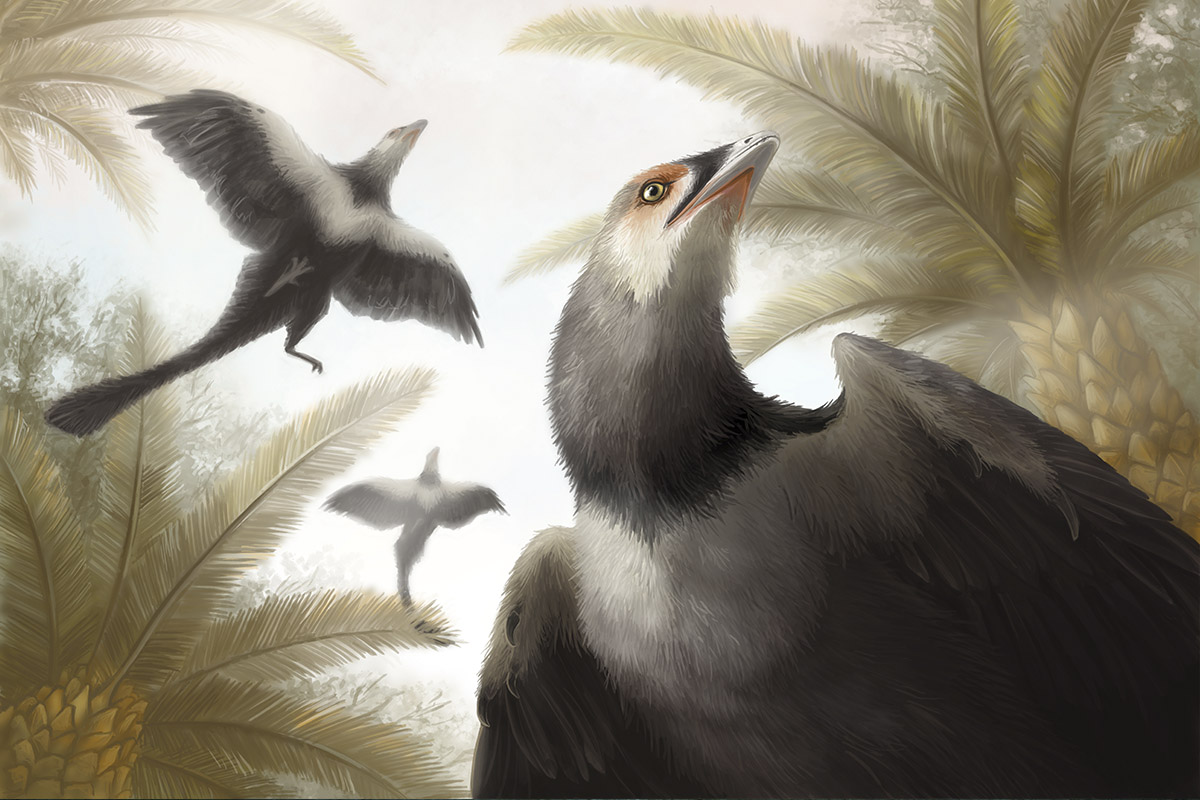 For now though, we can be certain that dinosaurs were much more complex, diverse and in many cases, fluffier than the first paleontologists believed.