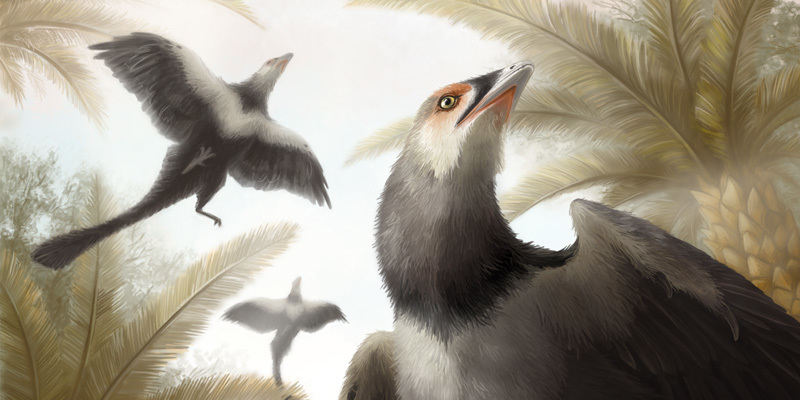 over 4 years ago by Meig Dickson

All Posts
This question is actually surprisingly complicated and depends on what, exactly, you think makes a bird a bird.

One typically learns in school that a bird is a bipedal, warm-blooded animal, a vertebrate, covered in feathers and lays eggs. Some can fly, but not all of them. And, until we started to think about extinct animals, this was enough. It was pretty clear what was a bird, or a mammal, or a reptile, when you only looked at things that were alive today.

But when you start to consider extinct organisms, the picture becomes significantly less clear. In school, typically the answer for what the first bird was, is Archaeopteryx. Archaeopteryx was a small, bipedal dinosaur, covered in feathers, with clear wing feathers, and was probably warm blooded. Problem solved!

Except as we learn more and more about dinosaurs and how they evolved, it becomes increasingly clear that Archaeopteryx was not unique, and it was not the first dinosaur to show these traits. Wing feathers are actually present in such dinosaurs as Velociraptor and Oviraptor, animals we don’t typically call “birds.” These animals were also bipedal and warm-blooded. They couldn’t fly, though, so perhaps that’s what sets Archaeopteryx apart – it’s ability to fly. 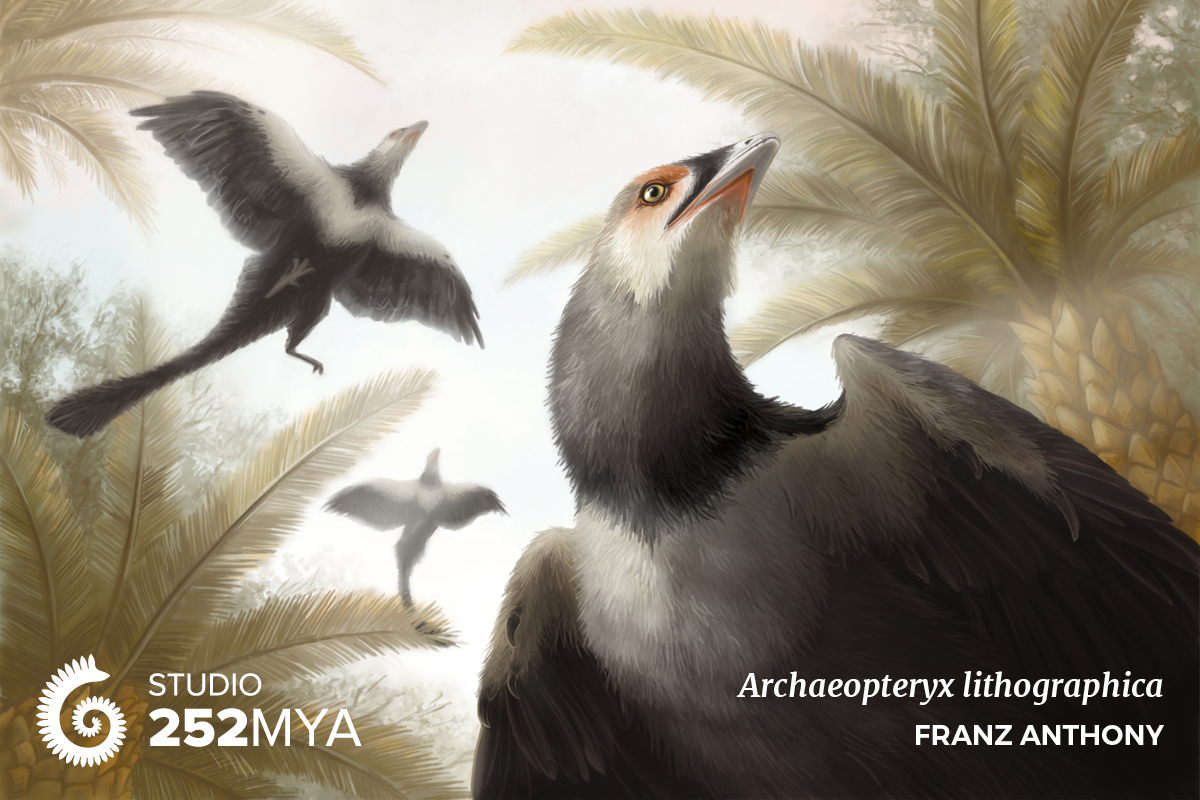 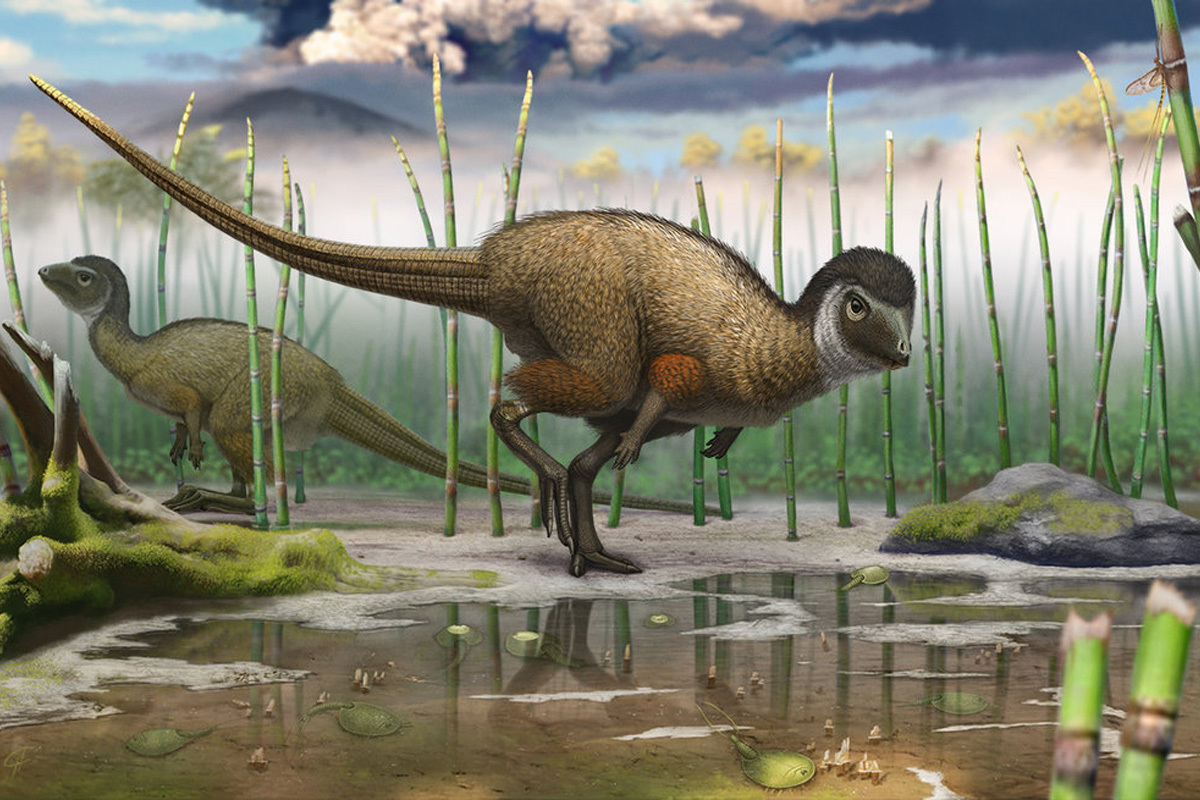 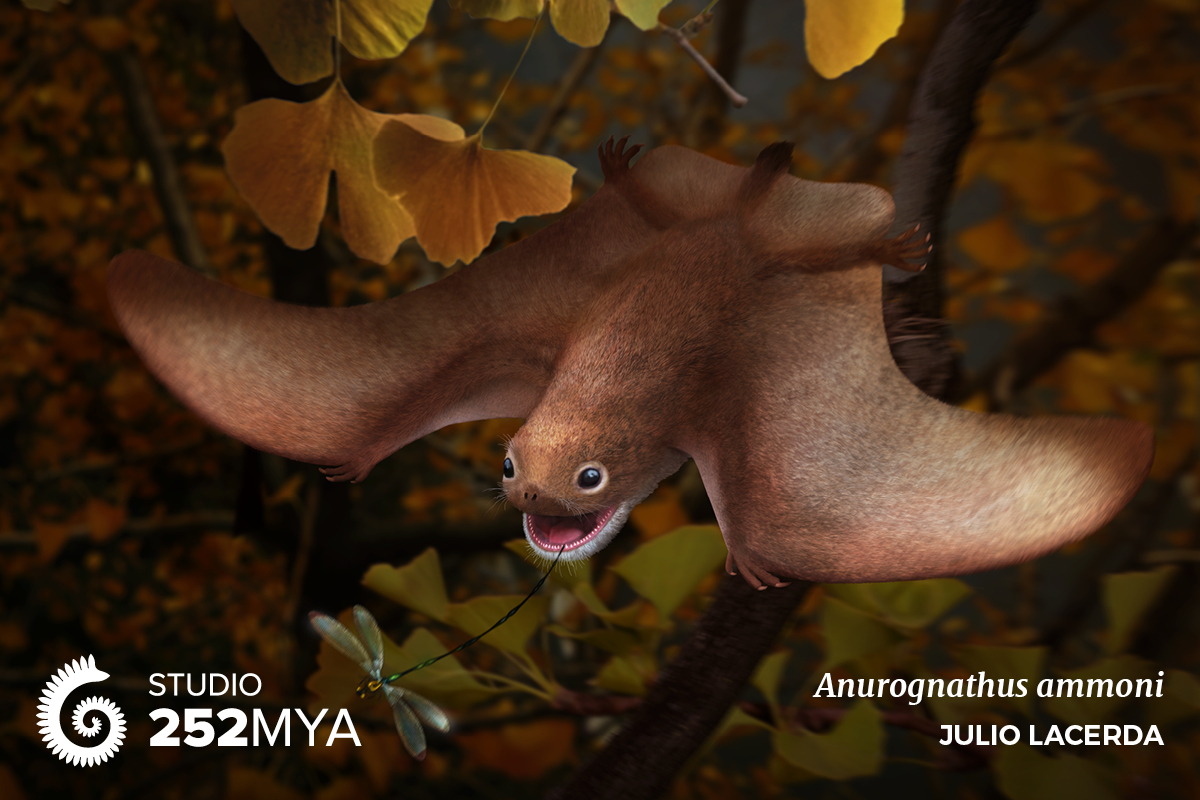 Anurognathus
Pterosaurs are known to have pycnofibre or pterofuzz throughout its body.
Julio Lacerda

But Archaeopteryx couldn’t even fly. It did not have the musculature necessary to power its own flight – the most it could do was glide! And given that flight is an optional characteristic for birds anyway, it seems rather unfair to Ostriches and Emus as well as Archaeopteryx to make flight a necessary characteristic of being a bird.

Frankly, scientists have trouble deciding at what point an animal is considered a bird. They know this point is somewhere in the group of animals that are more closely related to birds than they are to any other modern animal – this group is called Avemetatarsalia, and includes all dinosaurs (including modern birds,) pterosaurs, and close relatives. We know all these animals are more closely related to living birds than to any other group of animals through the process of cladistics. Paleontologists and biologists look at the different characteristics of animals, and test what is the simplest explanation for how those characteristics evolved, and thus how the animals themselves evolved. Crocodiles, the closest living relatives to birds, are used as an external marker – if anything is as closely related to crocodiles as it is to birds, then they aren’t in Avemetatarsalia.

So the group Avemetatarsalia is given the name Pan-Birds, indicating its inclusion of birds and all things closer to birds than to anything else. And all modern birds are in the group Neornithes, and are called Crown Birds. But what is the first bird?

Well let’s look at our characteristics. If we’re going off of feathers, the classic thing that one thinks of when they hear the word “feather” – a vane running down the middle with barbs coming off the sides – were definitely first seen in animals such as Oviraptor, a large, chicken-parrot like animal that you probably would call a bird if you saw it today, but is not considered a traditional “bird.” It is possible, however, that such feathers were present in things even earlier than that – animals such as Ornithomimus, which, again, one probably would call a bird today, but wasn’t traditionally.

Still, it seems strange to draw the line at this point. After all, we don’t just call these vaned structures – known scientifically as pennaceous feathers – feathers? We also call most fluffy features on bird feathers, such as the downy feathers. And these were present in a lot of animals, not just Ornithomimus and later relatives. When did the first things that we would consider feathers even evolve? 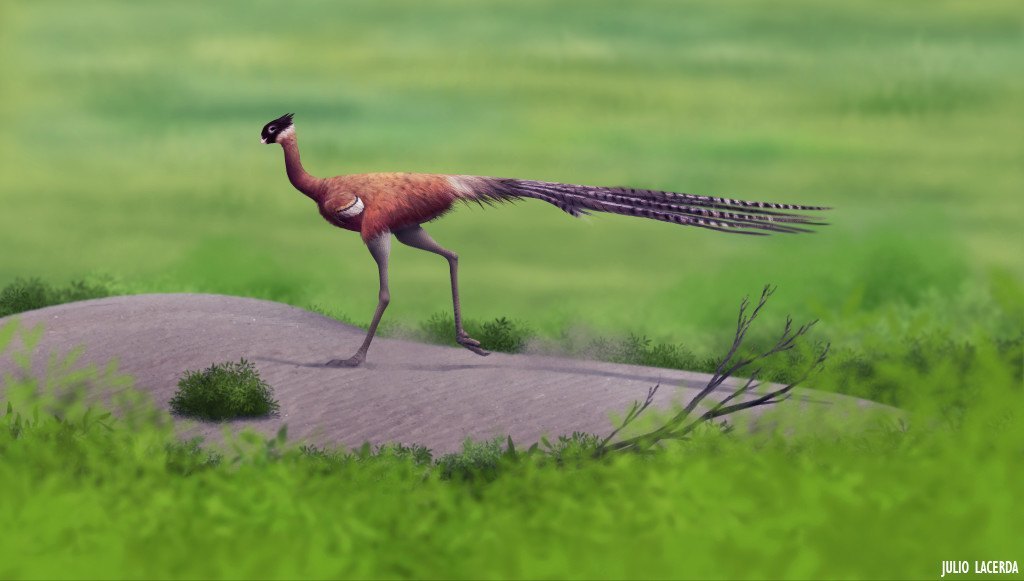 This is actually a fascinating question. The first stage in how feathers evolved was simple, single filaments, similar to fur on mammals but independently evolved, even made out of completely different proteins. Structures similar to this first stage of feather evolution have been found in three groups in the Pan-Bird group: pterosaurs, ornithischian dinosaurs, and coelurosaurs.

In pterosaurs, this structure is called a pycnofiber. In dinosaurs, they are called protofeathers. They are all, structurally speaking, identical. It is difficult to prove via fossil evidence that they all come from the same evolutionary origin, i.e., are homologous. However, one can consider what the simplest explanation is. In science, the simplest explanation is usually the preferred one, until evidence comes to light that disproves it.

Simply put, pterosaurs and dinosaurs did not have millions of years separating their evolution. Far from it! The groups evolved rapidly, diverging from one another over a very short period of time. The first Avemetatarsalians evolved 245 million years ago. Almost immediately afterwards, dinosaurs and pterosaurs split from one another. Within ten million years, Ornithischians and Saurischians (the group that includes Coelurosaurs) split from each other. It takes a long time for novel integumentary structures such as single filaments like protofeathers and pycnofibres to evolve. It is a much simpler explanation, indeed, that this structure was ancestral to Avemetatarsalia and, as such, protofeathers and pycnofibres are the same thing.

Furthermore, functionally, we would have called them feathers anyway. The same protein that makes up crocodilian scales makes up bird feathers, and would be the major component of any structure on pterosaur and dinosaurian skin. What, indeed, is the difference between a single filament made out of beta-keratin on a pterosaur, and on a Coelurosaur? We call many things that are not even made of the same proteins scales on such animals as fish and reptiles; if pterosaurs had survived to today, we surely would have called their pycnofibres feathers, as we would have the fuzz on ornithischians such as Kulindadromeus. 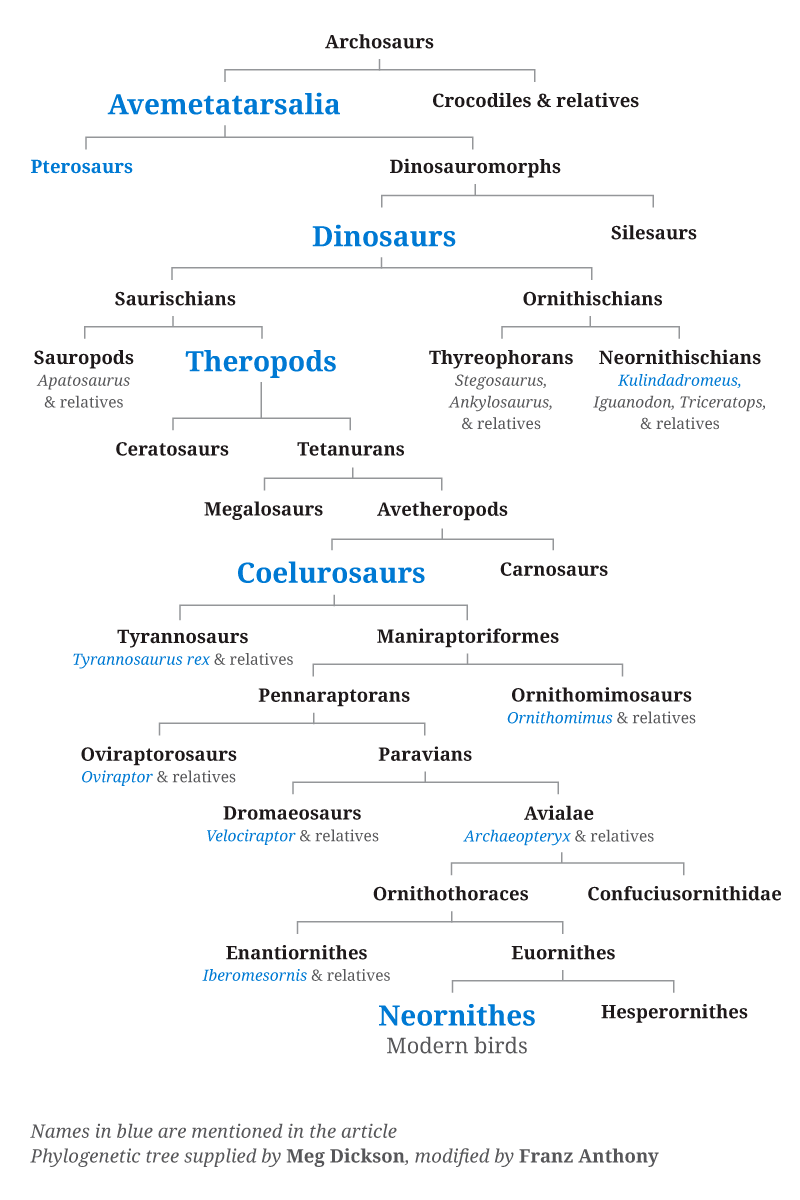 Still, the structure being homologous between all three groups is the simplest explanation. Sadly, feathers do not fossilize very well. They decompose rapidly, being made out of very soft tissue. Scales also fossilize poorly, even though they’re made of harder protein structures. For that matter, because they don’t fossilize well, it stands to reason that we are probably grossly underestimating how many dinosaurs had feathers. After all, if so many different kinds are now being found with single filament fluff, like pterosaurs and Kulindadromeus and relatives of Tyrannosaurus, it stands to reason that there were many more that had it than we can ever know, because of the lack of feather preservation.

In fact, when you assume that pterosaur pycnofibres and dinosaur filaments are homologous, you find that dinosaurs were ancestrally feathered. A paper that tried to claim this was wrong used data to show that dinosaurs were not ancestrally feathered but relied on the idea that pterosaur pycnofibres and dinosaur protofeathers weren’t homologous. When they assumed they were, they found that feathers were ancestral to dinosaurs. So, in truth, the simplest explanation is the opposite of what the paper tried to claim. It pays to read the literature closely.

So structures we’d call feathers were widespread in Avemetatarsalia. If that is our marker for what a bird is, does that mean we call the first Avemetatarsalian the first bird, and leave it at that? This seems reasonable enough, until you realize that this means pterosaurs are birds. This idea does not sit well with many, and yet, it follows.

Furthermore, it is highly likely that being warm-blooded – a condition used in defining birds – was ancestral to Avemetatarsalia as well. Warm-bloodedness is a key component of flight, so it was probably present in pterosaurs and studies recently came out that claimed dinosaurs were mesothermic, meaning in between warm-blooded and cold-blooded. However, this study was once again flawed. In fact, they greatly underestimated the growth rates of dinosaurs. When that is taken into account, it seems that dinosaurs were warm-blooded. Meaning, again, Avemetatarsalia lies at the heart of key traits of birds.

Still, this makes pterosaurs, sauropods, Stegosaurus, and Triceratops all birds, something many would not comply with. Perhaps the ability to have powered, flapping, feather-based flight? Sure, some birds would later lose it, but the first bird would be the first animal to evolve bird flight. Well, sadly, we don’t have a firm answer to that question. There are two groups of dinosaurs known to have flight in this way: Enantiornithes and Euornithes. However, it is uncertain whether or not they evolved this flight once, meaning the ancestor of both these groups, Ornithothoraces, could fly in this way, or if they each evolved it independently. Without this knowledge, we can never know which group – Euornithes, the group that includes modern birds of those two, or Ornithothoraces, is the first flying group. 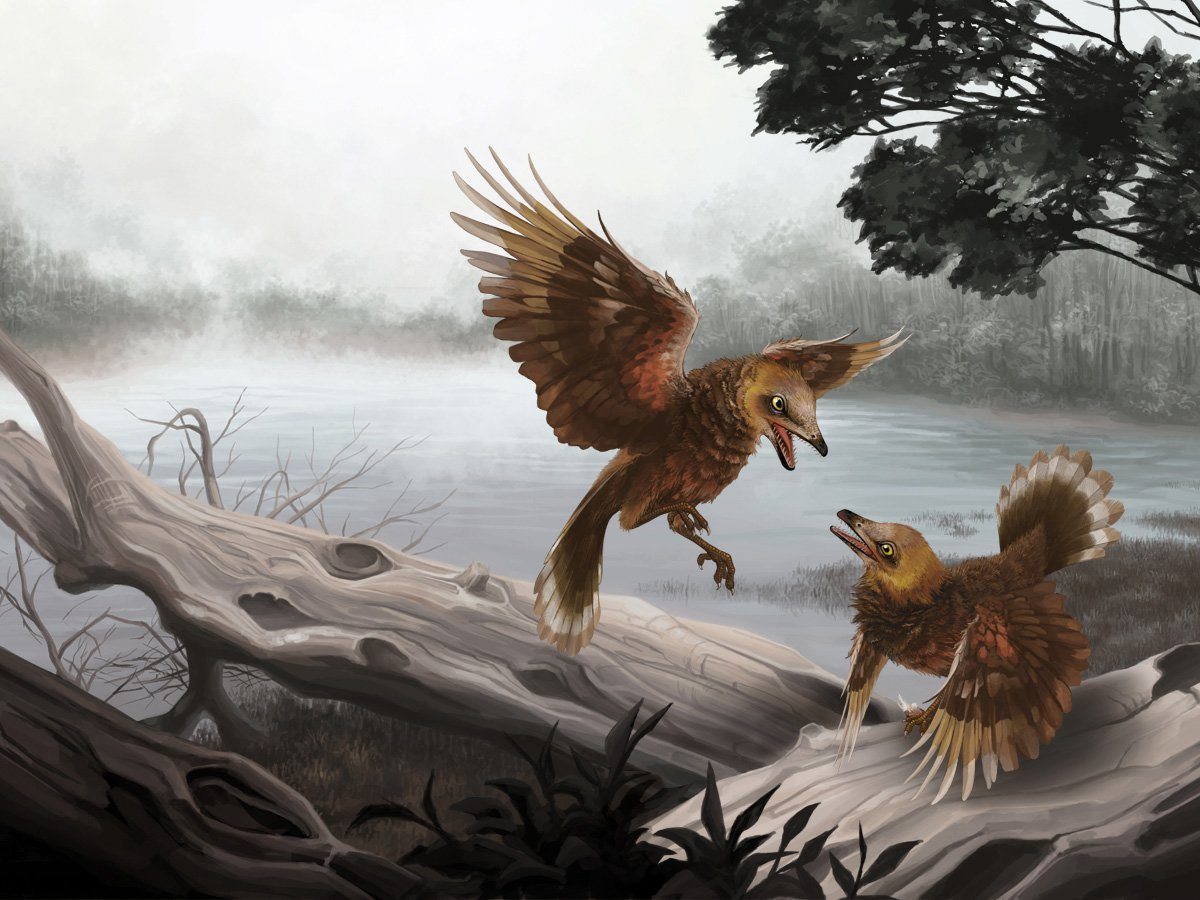 Perhaps the trait we should base “birddom” on should come from the origin of the word itself. Aves, the name Linnaeus gave to birds when he was classifying modern living things, and it stems from the Latin word for bird, Avis. This comes from the Proto-Indo-European root h2éwis which means the one who is in feathers, indicating that feathers are the defining trait of the group of organisms we call bird. So Aves, therefore, should probably refer to Avemetatarsalia – but what about the word “bird” itself? It does not come from the Latin word Avis. Indeed, the word “bird” comes from the Old English word bridd, which specifically means a young chick, so a small bird. Should that only apply to small organisms? Size is hard to characterize, and even then, there are plenty of large organisms that we call birds.

In the end, though, the problem lies not in trying to find an answer. Archaeopteryx is arbitrary, but so is any of these other points we have mentioned. Linnaeus invented the group Aves to mean a specific group of living organisms. Linnaeus invented his entire classification system only to apply to living things. When it comes to transitional animals, or extinct things that defy his classification, it’s almost impossible to apply his system. Many of his groups have fallen by the wayside the more we understand how organisms evolved. Protists and Monerans are no longer in existence, and reptiles are not a single evolutionary unit unless you include birds (interestingly, mammals do not have to be included but that’s a story for another time).

Perhaps the true problem is trying to apply the term bird to anything specific trait or characteristic, or even trying to keep it at all. The group of organisms that would give rise to birds is a complex, varied, and amazingly diverse assembly of animals, and trying to define “bird” at any point other than the most inclusive group, Avemetatarsalia, or the most exclusive group, Neornithes, is arbitrary and, frankly, simplistic. Archaeopteryx is not the first bird. It was not the first animal in this group that was warm-blooded, could fly, or had complex feathers or even any feathers at all. It simply is significant to us as people for being one of the first transitional animals we knew of. But now we have so much more and a diverse history of evolution to enjoy and marvel at. And every time we see a modern dinosaur – a modern bird – we are reminded of this amazing success story.

So what is a bird?

Well, really, anything between Avemetatarsalia and Neornithes. Beyond that, it’s up to you.

Meg Dickson is a Biology PhD Student at the University of Illinois at Chicago. She runs the blog A Dinosaur A Day.