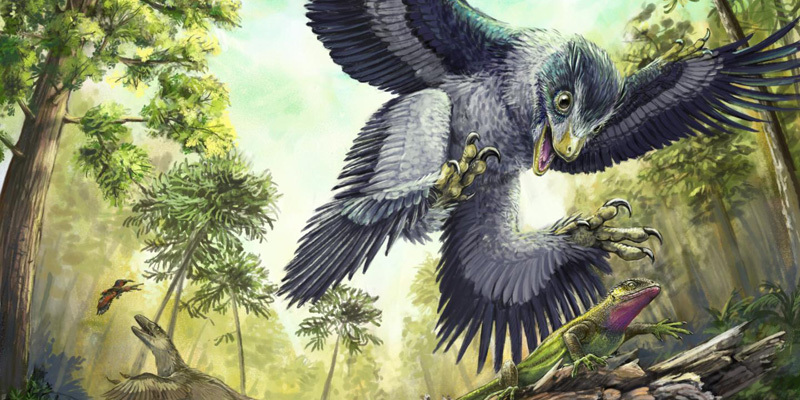 How did birds outlive their non-avian dinosaur relatives?

All Posts
It is a common idea that an asteroid impact spelled the doom for most non-avian dinosaurs at the end of Late Cretaceous. In the past two decades, researchers are shifting the question to how birds managed to survive the calamity.

Two years ago during, a presentation at the Royal Ontario Museum when Tom Cullen, a PhD student joked, “Why don’t we burn a forest down?” The quip kickstarted the train of thought for the researchers in the room, who were discussing the asteroid impact and how to possibly reconstruct the event.

When the impact struck what is known today as Yucatan Peninsula, it likely caused earthquakes and tsunamis, immediately killing lifeforms around the area. The Canadian team suggested, however, that the debris potentially re-entered the atmosphere at high temperature, scorching landscapes throughout the continent. Combined with the dimmed atmosphere which halted photosynthesis and food chain on a global scale, this event likely spared only a fourth of plants and animals species at that time.

David Evans, co-author of the paper, suggested that birds and their early relatives might have survived the disaster due to their seed-based diet. This idea is supported by the notion that in the event of wildfires today, birds are among the earliest vertebrates to repopulate the area afterwards. The nutrient-rich kernels are said to be readily available even during the harshest times, when other prey items are in sharp decline. As a result, toothless early birds had the upper hand during the recovery phase, repopulating the planet and diversifying to fill the empty niches.

While another study this week suggested that most dinosaur families were already in decline during the Late Cretaceous, the Canadian team found that bird-like dinosaurs were flourishing before the impact. The beaked seed eaters just happened to adapt to the changing environment way better than their meat-eating relatives.

Derek Larson, an assistant curator at the Philip J. Currie Dinosaur Museum near Grande Prairie, Alberta, suggested that fossil beaks might shed a light on the transitional era close to the extinction event. Unfortunately, such fossils are even less common than dinosaur teeth. The team are only able to gather the evidence needed due to the state’s strict law which prohibits sales of fossil fragments however small. This issue becomes a concern, as potential scientific knowledge may be forever inaccessible when fossil pieces fall into a private collector’s hands due to the thriving commercial market.

Original findings published in The Globe and Mail.


Related Stories
What are birds?
Not every extinct reptile is a dinosaur
South Korea's first complete small dinosaur skeleton
From egg to enormous dinosaur, the making of a titanosaur
Tiny bonehead skull uncovers the early life of Pachycephalosaurus
//sulc.us/fmy1j
/articles/how-did-birds-outlive-their-non-avian-dinosaur-relatives/