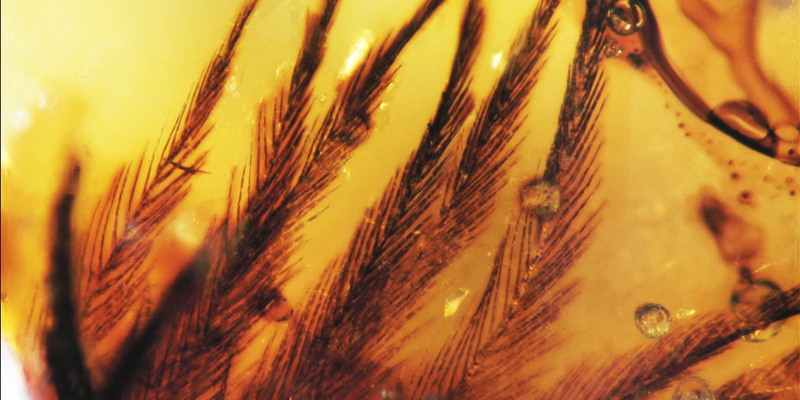 almost 6 years ago by Luigi Gaskell

All Posts
Amber is surprisingly efficient at preserving soft tissue that would normally deteriorate under normal taphonomic conditions. Valuable information on the structure and evolution of feathers is discussed.

The way feathers evolved and diversified throughout the Mesozoic is becoming better understood with each discovery of a new feathered dinosaur. Be it the turkey-sized Sinosauropteryx, the four-winged Microraptor, or the two ton Yutyrannus, the number of exquisitely preserved feathered dinosaurs that paleontologists find is nearly overwhelming. Almost all of them are from China, though, and outside of China, we rarely find good specimens of feathered dinosaurs.

However, these particular specimens are quite different. For one, they’re from Canada, not China. And second, instead of simply preserving the plumage as a trace around the skeleton, these specimens are a set of 11 fully preserved clumps of feathers with their original structure intact, trapped inside the amber as if they were frozen in time. Forget finding mosquitoes in amber with dinosaur blood à la Jurassic Park, paleontologists are now finding literal pieces of dinosaurs inside amber. Paleontologist Ryan Mckellar and his coauthors described several such specimens from Grassy Lake in Alberta, Canada, dating back to the late Cretaceous. The feathers inside the amber are so well preserved that their composition and anatomical structure are easily observable to paleontologists. The filamentous structures can be easily seen branching off in all directions inside the amber, while others clearly show similarity to modern flight feathers in birds. 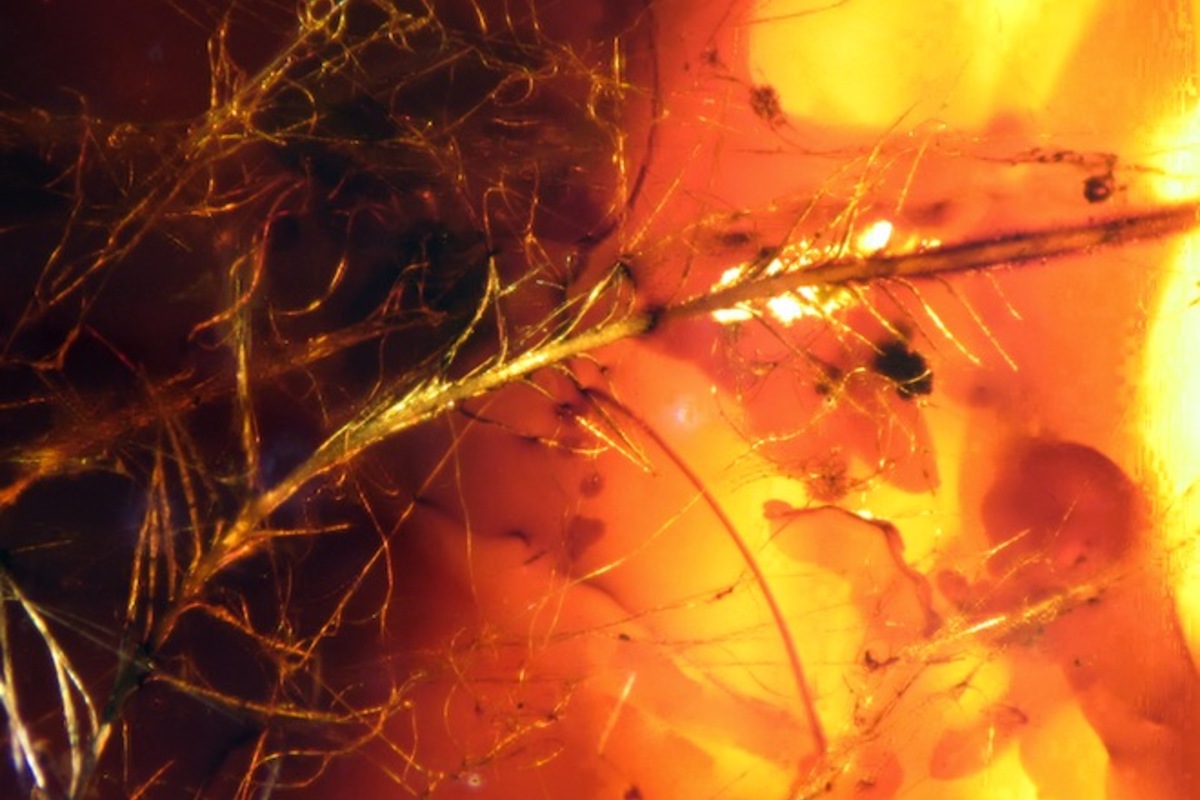 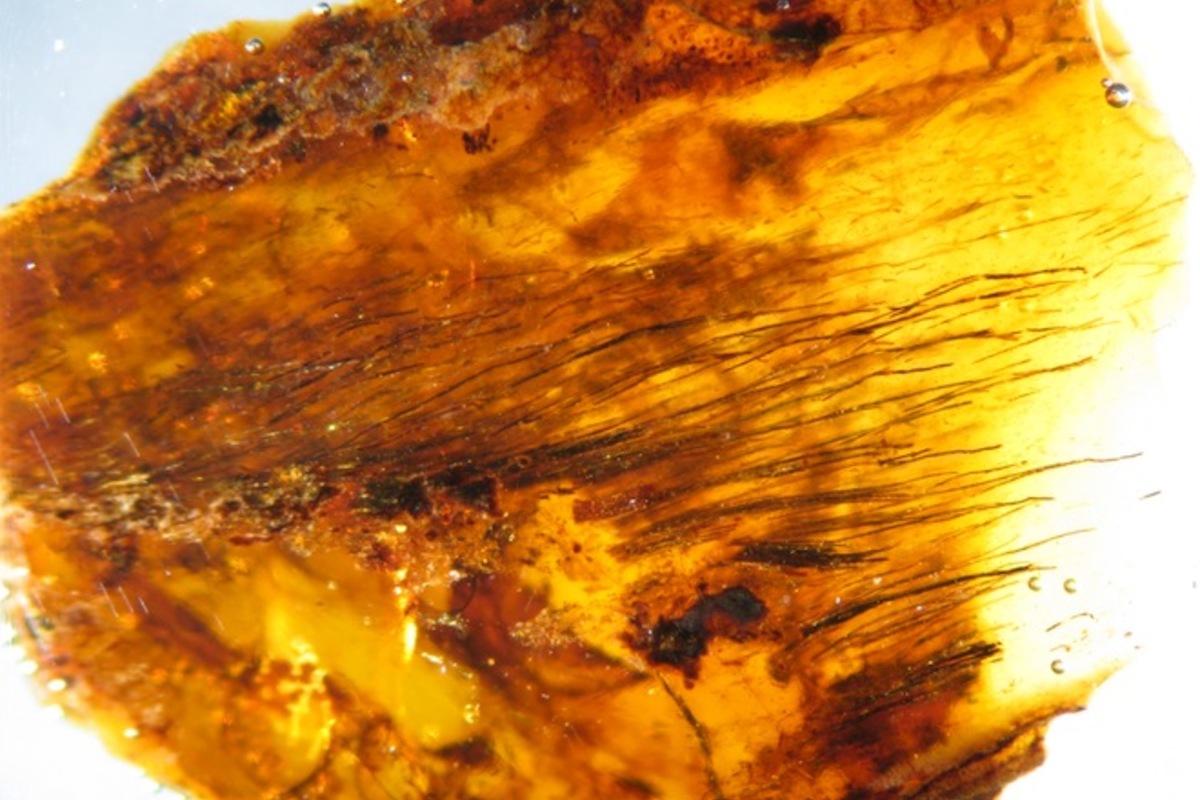 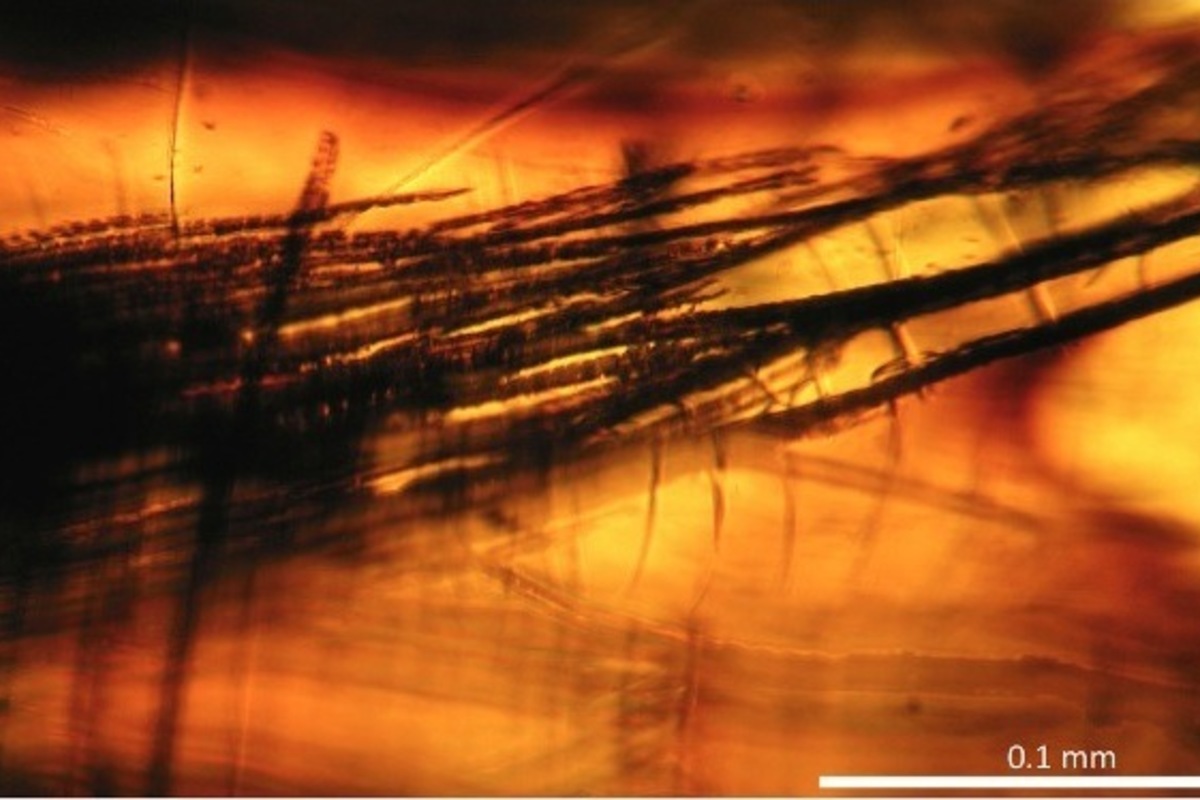 Feathers typically are divided into certain stages based on how derived they are. The earliest and most simple were single filament strands resembling fur. In other cases, these single filaments seem to split into two or three smaller shafts, and some filaments finally show the beginnings of multiple branching filaments from a single shaft. The vaned feathers with a calamus or “quill” that we see on modern birds are called pennaceous feathers. A pennaceous feather is made of a calamus, a rachis continuing from the calamus, and multiple barbs and a vane branching onto the sides. The specimens Mckellar and colleagues looked at contained all of the feather types mentioned prior.

Some of the specimens examined by Mckellar and colleagues even show adaptations for diving and swimming, much like penguin and loon feathers that provide efficiency for feeding underwater. The feathers inside the amber are so exquisitely preserved that they even retain their natural pigment. Normally, when paleontologists determine the pigment of a dinosaur’s body covering, they’d have to look at traces of pigment in structures called melanosomes in the preserved feathers. The fossil melanosomes are compared to those in closely related living animals, such as birds in this case, to determine whether they correspond to eumelanin (the melanin that makes dark colors such as the grey and blues in sharks and crows) or pheomelanin (the type that makes the reds and browns in things like lions and sparrows). This was different, though, since the pigment didn’t even deteriorate. It seems like amber is a lot better at preserving things than Jurassic Park had us think.

The diversity of the specimens that were studied by McKellar and his colleagues may indicate a previously overlooked diversity of dinosaur plumage in Canada during the upper Cretaceous. It appears that dinosaurs during the Cretaceous were just as diverse in their plumage as their modern day representatives, the birds.

Although everyone knows what a feather looks like, not many people know what a feather really is. Feathers are more than just those things that help birds fly and keep warm. Typically, a feather is a filamentous structure made of a protein called keratin, the same kind of protein that hair, nails, and scales are made of. This, along with some genetic evidence, seems to point to feathers and scales being homologous and the common ancestor of crocodiles and dinosaurs must have had some kind of primitive body covering made of keratin that eventually evolved into what we know as scales and feathers.

Pigment is rarely ever preserved as well as in the case of Mckellar and colleagues’ specimens. Generally, the only traces or evidence of pigment in feathers that we’re lucky enough to find are the melanosomes. Depending on what kind of melanin is found in the feathers, that’s usually how we determine the coloration of some other dinosaurs. Anchiornis, Microraptor, Sinornithosaurus, Psittacosaurus, and the recently discovered Borealopelta are more famous examples of dinosaurs whose coloration we’ve figured out thanks to the beauty of melanosomes.

Mckellar and colleagues’ study means a lot for the future of vertebrate paleontology. Could there be more astonishingly well-preserved specimens trapped in amber somewhere? What implications do these sort of specimens have for future research? Luckily for us, paleontological research and discovery is always uncovering more answers and information, so it may not be long before more discoveries like this are made.