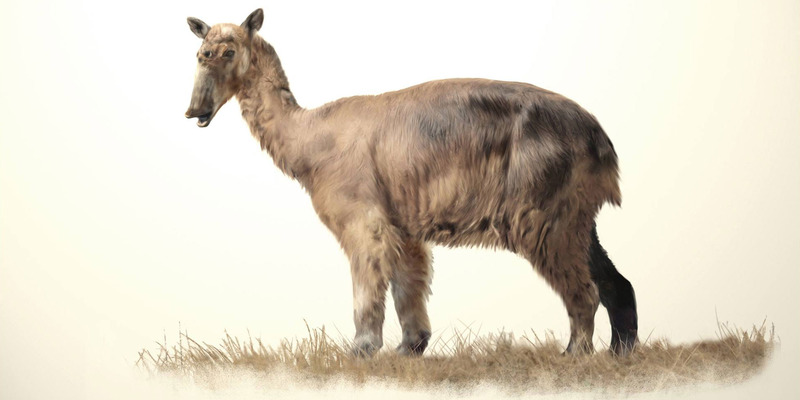 Weird mammals get a home in the tree of life

All Posts
Two wonderfully weird animals from the last ice age of South America never had a real home in the mammal family tree. Through protein sequencing of fossil bones, scientists have found their closest living relatives.

A longstanding evolutionary riddle has now been solved by sequencing protein found in the fossils of two strange extinct South American mammals.

Macrauchenia patachonica and Toxodon platensis were two mammals exhibiting some mosaic features which made them difficult to place in the tree of life. Going all the way back to Darwin, scientists couldn't figure out whether they were related to horses, elephants or belonged to altogether new groups. South American mammals from the Pleistocene were just weird.

Researchers from the American Museum of Natural History and the Natural History Museum in London set out to solve this puzzle by analyzing organic remains from the two animal's bones. They couldn't do this with DNA because it degrades rapidly over time, especially in warmer climates like those of South America. So they went looking for proteins and actually found some.

Collagen, the protein in hair, fingernails and skin, seems to be a stable molecule and scientists have successfully recovered it in bones up to 4 million years old. When they sequenced the collagen found in Macrauchenia and Toxodon and compared it to modern day animals they discovered it most closely matched the perissodactyls, a group including horses, rhinos and tapirs.

South America's wonderfully weird mammals from the past weren't related to rodents, elephants or camels after all.