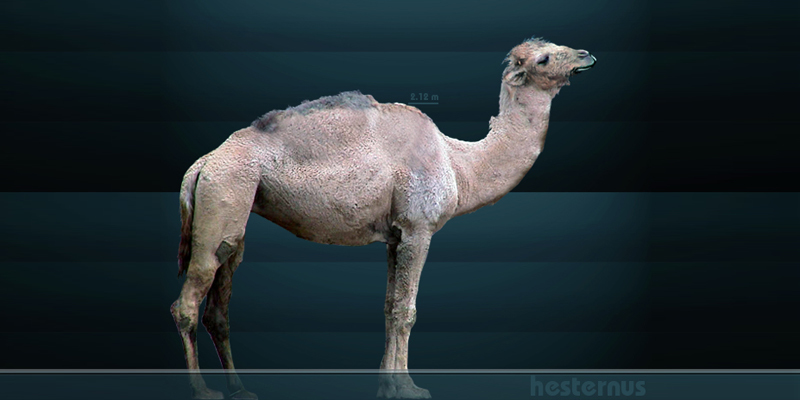 The last camels of North America

over 5 years ago by Pete Buchholz

All Posts
DNA extracted from bones collected in the Yukon show that North America's last camel was a close relative of Old World camels and not llamas as previously thought.

Although they are now extinct in North America, camels first evolved there more than 40 million years ago. Living camels are now limited to the Old World (dromedary and Bactrian camels), and South America (llamas, guanacos, and alpacas). For much of the Cenozoic however, camels were common and diverse in North America. One of the last camels to live in North America was Camelops, which went extinct about 13,000 years ago.

Camelops is known from numerous specimens from all over North America. It was about the same size as Old World camels and looked similar to living camels and llamas with a long mobile neck, long legs and feet with two toes each. Camelops lived late enough to have been encountered by the first humans to enter the Americas, and there is direct evidence of hunting and butchering by humans.

Camels were one of several groups of animals present in North America that went extinct locally at the same time humans arrived in the Americas. Camels, as well as horses and tapirs even originated on the continent, but are now extinct there due to a combination of the Ice Age and human arrivals.

In 2015, paleontologists Peter Heintzman and colleagues used 75,000 year-old bones found in a gravel mine in the Yukon of Canada to determine the relationship of Camelops to living camels. The bones had been preserved in sediments that were either frozen or very cold since the animals’ death. This prevented many biomolecules, including DNA, from being lost in the fossilization process.

The authors collected DNA from these bones and compared it to living camels and llamas. They found that, contrary to previous ideas, Camelops is actually much more closely related to Old World camels than it is to South American camels. By their estimates, the Old World camels and Camelops diverged from each other about 12 million years ago, and the two living Old World camels split about five million years ago. Additionally, they found that the South American lineage didn't diversify until after it had arrived on the continent.

This research helps paleontologists understand the evolution of camels in the Americas, and solve some mysteries about anatomical convergence (similar body features), as well as the timing of divergence. Future finds of DNA in frozen bones may further resolve the relationships of camels and other recently extinct animals.

Read the original research in Molecular Biology and Evolution.


Related Stories
Saber-toothed kittens were born bruisers
What would you get if you mixed a dog and a bear?
Weird mammals get a home in the tree of life
Extinct hoofed animals looked like gorilla-horse hybrids
The cave hyenas of ice age Europe
//sulc.us/50gv6
/articles/ice-age-camel-bones-found-in-yukon-redraw-species-lineage/