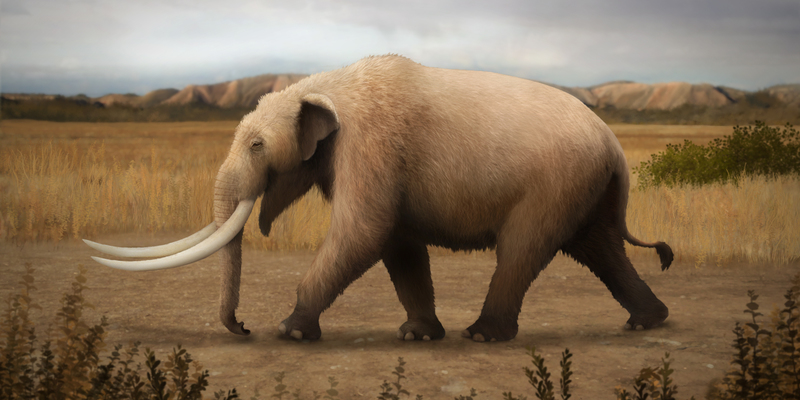 All Posts
In the middle of the city of Los Angeles lies one of the most important fossil sites in all the world. The La Brea tar pits preserve an Ice Age eden beyond the grip of the huge glaciers that leveled North America.

The La Brea Tar Pits of California probably need no introduction, being one of the most famous Pleistocene fossil deposits anywhere in the world, having been known for centuries. More specifically they are situated in Hancock Park in the Los Angeles area and constitute deposits made of natural asphalt that seeps up to the ground’s surface. Even today the tar is present, and is often covered up by leaves and natural debris.

In winter the tar solidifies and makes it much safer to cross, but in summer they become a natural trap. Even today the pits ensnare plenty of organisms and so they are fenced off from people and animals. These beds document a beautiful record of the Pleistocene megafauna of Western North America, and are a veritable treasure trove, with remains ranging from microfossils to nearly complete skeletons of mammoths.

North America was once a very different place at the time of the Late Glacial Maximum or the Late Ice Age. It was preceded by the Last Glacial Maximum and together these periods ran from roughly 26,500 to 10,000 years ago.  There was not just one ice age but several glaciations and interglacials occurring over a period of roughly 2 million years, during the whole duration of the Pleistocene. 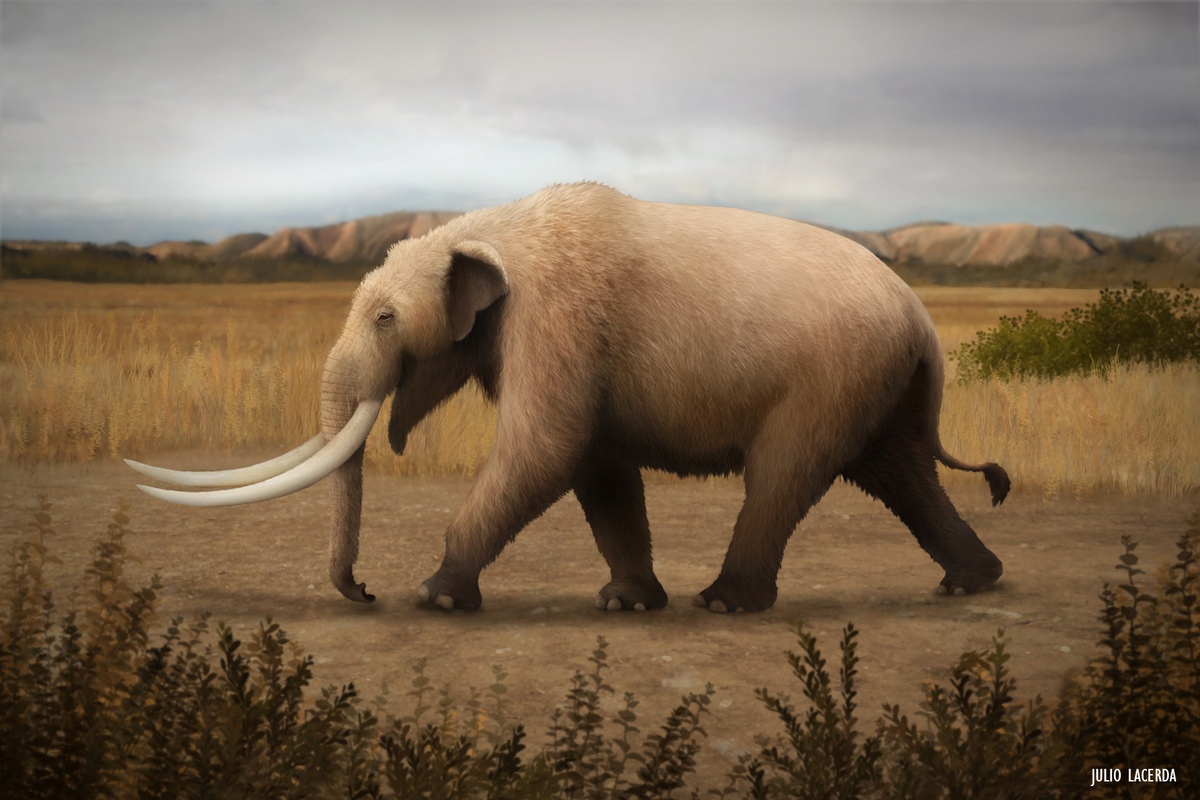 American Mastodon
The second of the two big proboscideans of the La Brea area.
Julio Lacerda 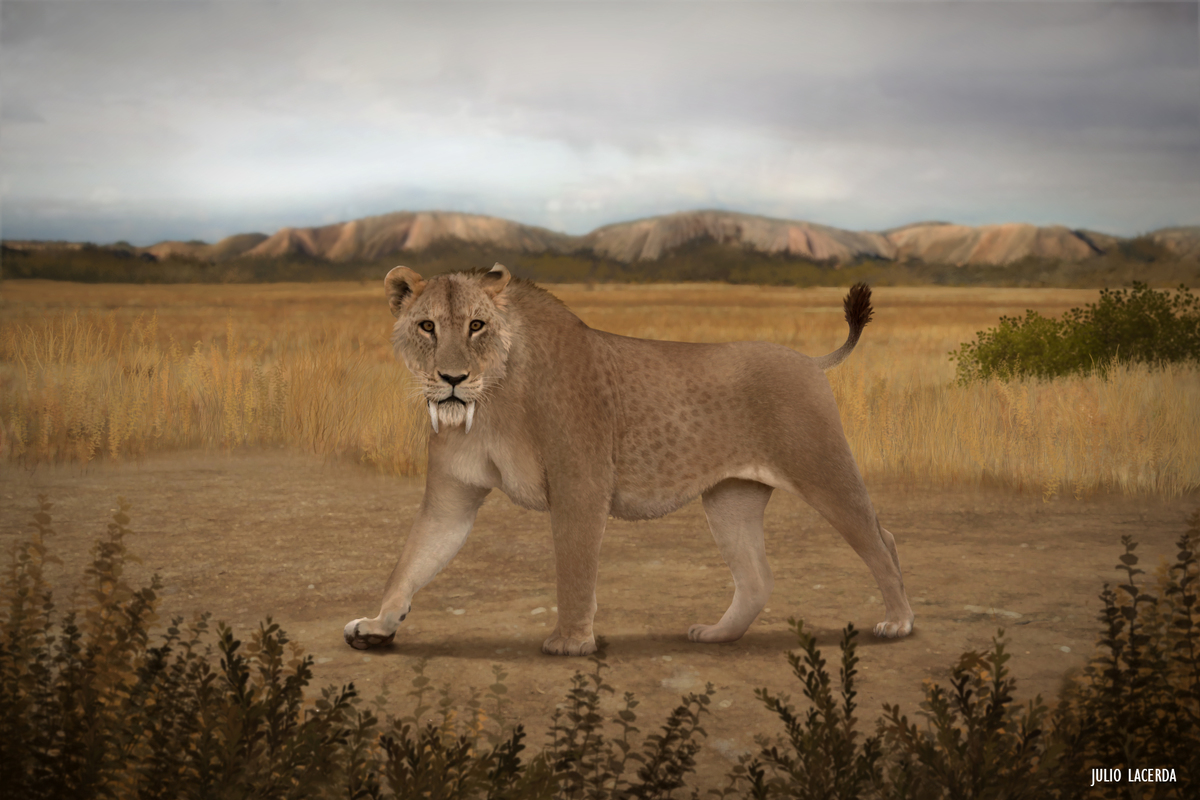 Sabertooth cat
The sabertooth cat Smilodon was one of the more common big predators in La Brea.
Julio Lacerda 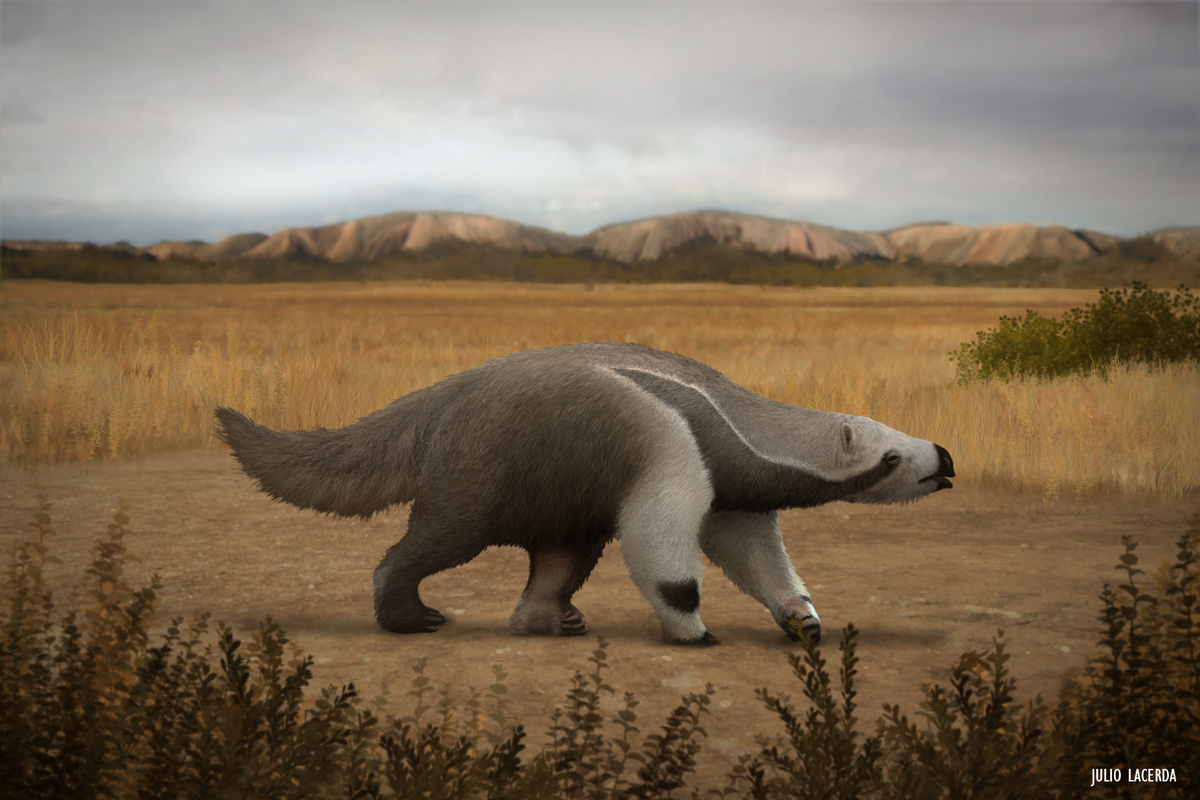 Jefferson's ground sloth
One of the lower-energy browsers of La Brea, Megalonyx was able to switch between bipedal and quadrupedal stances.
Julio Lacerda

In North America at least, this latest glaciation event was known as the Wisconsin Glaciation, and the entire northern half of the continent was locked in ice. Ice sheets spanned the entirety of the Arctic, with their southernmost extent being in New York. South of the ice however, much of North America was cooler and wetter than what it is today, with hardly any snowfall.

Much of southern and western North America was covered by temperate swamps and deciduous forests, while plains extended outward from them and the Grand Canyon area was still an area of scrubby vegetation. It is the former that is preserved in La Brea, a thriving swampland community that often used the lakes and rivers for water. In this particular case though, there were asphalt deposits lurking just below the surface. As for the actual faunal community, we have many remains of modern mammals like pronghorns, hares, deer, mice and voles. These herbivores are present even today.

The very biggest herbivores found here are the titanic Columbian mammoths (Mammuthus columbii). At the time, these animals were the largest land animals in North America, standing 4 meters tall at the shoulder and weighing more than 10 tons. These creatures had impressive twisted tusks, so were useless stabbing weapons, but were ideal for actually pushing and shoving a rival or enemy. Columbian mammoths were essentially bald, living in warmer climates than the more famous woolly mammoths, but we have evidence that in North America, their ranges somewhat overlapped.

Virtually all mammoths are grazers, and the Columbian is no different. These elephants all have huge, high-ridged molars for grinding gritty food. The high ridges help them to avoid wearing down the enamel. They might have cleared away forest on the search for newer grass as well. Analysis of the dung though shows us that they even browsed, taking oak and maple, and probably even Osage orange and honey locust fruits. These fruits are thought to have evolved in tandem with proboscideans (elephants) in North America, and no native herbivores now take on their role.

The American mastodon (Mammut americanum) is North America's second proboscidean. Normally mastodons are associated with the spruce woodlands of Eastern North America  but they seem to have made their home even here in California. Mastodons are not as closely related to modern elephants as are mammoths. They are much more ancient and are far more muscular, with solid heavy bodies and short skulls as opposed to the high forehead and shoulders of their mammoth contemporaries. Mastodons were also almost entirely browsing animals. The biggest were 3.3 meters tall but weighed as much as or slightly more than, a Columbian mammoth due to their robustness.

The most common herbivores in the area were probably the ancient bison (Bison antiquus). They were somewhat larger than modern American bison, at 2.3 meters tall at the shoulder. These big herbivores are found more often than those of their contemporaries, meaning that they might have been forest or swamp animals by nature. They may have been more like modern water buffalo than bison today, which are prairie animals. Indeed, the open prairies did not even exist and there was far more tree cover. Whether or not they lived in herds numbering thousands like modern prairie bison is not known, since woodland bovids do not generally live in groups that large.

While modern-style pronghorns were indeed present, there were also dwarf pronghorns (Capromeryx minor). The Western camel (Camelops hesternus) was one of the last camelids in North America. The entire family originated here but went extinct in the Americas, with only the guanacos and vicuñas persisting in South America. Thus the Western camel might have resembled a modern guanaco or a llama-like animal rather than looking more like a modern dromedary or Bactrian. Horses also originated in North America, and in the Pleistocene of California, there were three species.

There were even ground sloths in this area, such as the most common of the North American sloths, the Jefferson ground sloth (Megalonyx jeffersonii). These creatures were able to switch between bipedal and quadrupedal positions, thus feeding on both branches and low-level vegetation. These sloths were originally natives from South America and migrated north during the American Interchange after the Isthmus of Panama formed to connect the two continents. They were able to do so well due to having a lower energy intake than their contemporaries. The same is true for these ox-sized sloths. The Jefferson’s ground sloth is named after Thomas Jefferson himself, who found the first remains of the animal.

The carnivores of the area include those found today, like cougars, lynx, and grey wolves with the omnivorous roles being filled mostly by black and brown bears. In Pleistocene times, though, the most commonly found predatory mammals here are the dire wolves (Canis dirus). These were not much bigger than gray wolves, a sharp contrast to their fantasy counterparts. They were, however, much heavier and stronger than grays, and more adapted to eating and crushing bone. In this way they were much more like hyenas. Their abundance might either mean that they really were just the most common large canids in the area or else they merely hunted in the swamplands.

Second is the world-famous North American sabertooth cat (Smilodon fatalis). We know that dire wolves were most definitely pack hunters and even sabertooths seem to have lived in groups. But there was hardly any sexual dimorphism between individual cats, unlike in lions today. With both males and females being similar in size, the sabertooth might actually have lived more like wolves. Of course the massive, flattened canines of the cat are what it is known for, but how it used these is rather unknown. The canines were quite brittle, and they had to use their powerfully muscled bodies to wrestle down their prey before making the killing strike. They were the size of lions, but much stronger and heavier. They would have used the cover of the trees to hunt, being slow and ponderous for cats. Sabertooth cats must have lived or hunted next to water as well.

The rarest big cat in the region is the massive American lion (Panthera leo atrox). These creatures were 1.2 meters at the shoulder, about a fifth as large again as either modern lions or their sabertooth contemporaries. They are rare in the tar pits, but whether they were indeed just rare or not swamp cats is up for debate. Certainly, lions today are savannah animals, and the American lion might have been the same. They are longer-faced and longer-legged than their African cousins, probably avoiding the sabertooths by hunting farther from the water, and coincidentally the asphalt deposits. Yet prides of lions might still have clashed against gray or dire wolves, or even sabertooth packs themselves where carcasses were concerned.

The largest carnivorous mammal here was the short-faced bear (Arctodus simus). It was a close relative of modern spectacled bears and was far taller than the contemporary brown bears. However, at around 1.5 meters tall at the shoulder, all it truly had was its massive height and a rather short muzzle and short body. Its long legs meant that it was once thought to be a sprinter capable of chasing wild horses but it is now known that its legs were thin in comparison to its body. Also its great weight meant that it was not a very speedy animal. It was not the super-predator that we once thought it was, being an omnivore like all modern bears. The short-faced bear was certainly massive enough to frighten wolves or big cats from their kills, so this made it an effective scavenger and kleptoparasite.

The fossil skeleton known as the La Brea Woman is one of the only Pleistocene humans from the tar pits. It is possible that there were very large human settlements in this region but they haven’t really been found in great numbers. The Woman indicates that the people here were hunter-gatherers and were probably nomads belonging to the Paleoindian Clovis Culture, the earliest of the North American cultures.