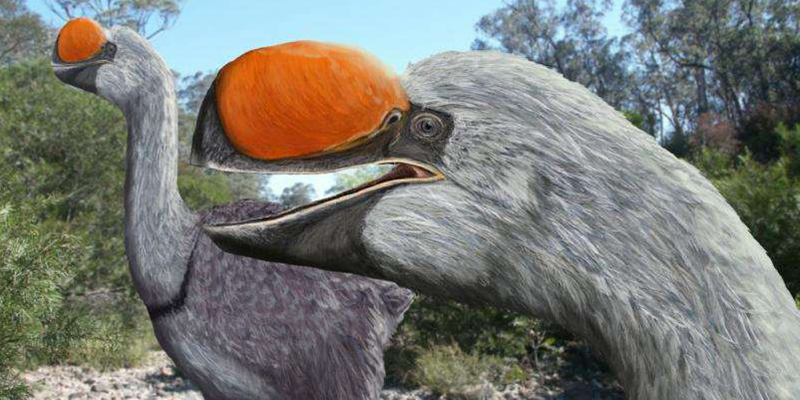 almost 5 years ago by Robert Katz

All Posts
If an island is large enough and isolated from land-based predators for enough time, one thing invariably happens: giant birds evolve.

Australia, the bastion of strange and unique wildlife, has preserved such a host of oddities because of its isolation. In the past, even stranger animals could have been found, from giant wombats to twenty-foot-long monitor lizards, as well as titanic kangaroos, enormous pythons, and marsupial lions. Perhaps among the strangest of Australian’s extinct megafauna were a group of birds called dromornithids, also known as the mihirungs or, due to their size and their relation to waterfowl, the “demon ducks of doom.”

The dromornithids were a staple in the late Cenozoic, and survived until very recently in geologic time. The first humans to reach Australia would have encountered at least a couple of species, including Genyornis newtoni, a 500 kg (1100 lbs) behemoth of a bird. Bullockornis planei, another mihirung, was a stocky, thick-billed animal that lived during the Miocene, making it among the oldest known dromornithids.

One fossil dromornithid, however, places the origins of the lineage even farther back. Dromornis murrayi lived during the late Oligocene, around 26 million years ago. Even the early members of the dromornithids, such as D. murrayi, appear to have been flightless, with greatly reduced wings in addition to their size – this early species was “only” 250 kg (550 lbs), about half the size of the largest known dromornithids.

D. murrayi was recovered by a team from Flinders University in South Australia from an area of area of northwest Queensland known as Riversleigh. This area is a hotspot of Australian fossils, and depicts a diverse forested ecosystem vastly different from the parched outback of the modern region.

In the late Oligocene and early Miocene, Riversleigh was home to a myriad of marsupial species, including multiple species of koalas, marsupial lions, thylacines, bandicoots, possums, kangaroos, and such oddities as marsupial “tapirs” and giant platypuses. A variety of reptile fossils are known from Riversleigh as well, including several species of turtles and crocodiles, another indication of a more humid and water-dominated ecosystem. Living alongside these animals were a few giant birds, including D. murrayi, undoubtedly the largest bird, as well as one of the most massive animals, in the Riversleigh ecosystem.

The discovery of D. murrayi indicates that the mihirungs are an even more ancient lineage than previously thought, and persisted for most of the Cenozoic. If they had already grown to massive sizes and lost their ability to fly by the late Oligocene, it is likely that the very first dromornithids would have lived during the Eocene, and may have originated shortly after the extinction of the non-avian dinosaurs.

Large birds were not unusual during the early Cenozoic: in North America and Europe, the largest land animals were huge, flightless birds for the first few million years of the “Age of Mammals.” It is likely that Australia’s isolation and lack of large mammalian predators enabled the dromornithids to reach their size, and retain it, in relative safety when compared to larger mainland continents. This “safety,” however, was all for naught when the first humans arrived in Australia – shortly after their arrival, the mihirungs, as well as a number of other species of megafauna, went extinct.


Related Stories
Stegodon, the “elephant” with sideways trunk
Komodo dragon's extinct cousin from Athens
What would you get if you mixed a dog and a bear?
The giant penguin with strange colors
Paraceratherium, the largest land mammal that ever lived
//sulc.us/ergxo
/articles/australia-s-demon-duck-of-doom/