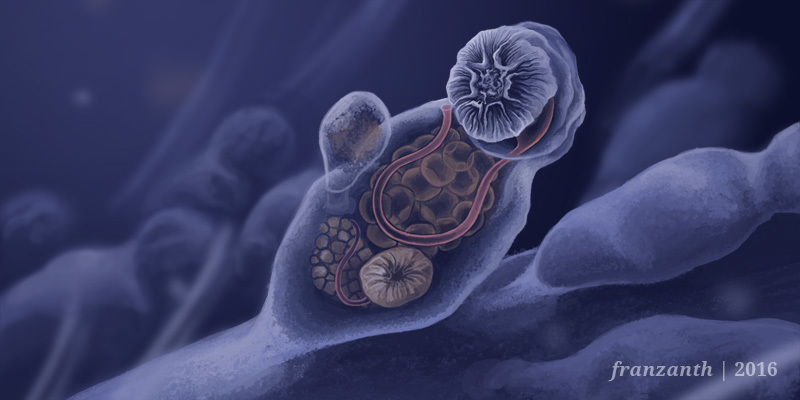 The hitchhiker’s guide to the lobster’s face

All Posts
What has a mouth that falls off, lives on an animal's facial hair, and is pregnant before it's even born? While it sounds like the the beginning of a terrible joke, such a creature does exist, and they're just as strange as you'd expect them to be.

In the 1960s, scientists discovered small organisms attached to the mouthparts of lobsters in European waters. While not much was thought of them at first, these organisms went on to be described in 1995, with the newly identified Symbion pandora becoming the first species in a unique clade of highly specialized organisms.

Symbions are organisms that are only found on the mouthpart hairs – setae – of three species of lobsters. There are only two known species of this phylum, with the most recently discovered species (Symbion americanus) only having been discovered in 2006 on a lobster species in North American waters.

Once officially described, symbions were assigned their own individual phylum, Cycliophora. To give a sense of differentiation from other organisms, phyla are large taxonomic groups organised based on unique morphological features. For example, the phylum Chordata consists of all animals with a backbone, and Arthropoda consists of all animals with segmented limbs. This phylum currently consists of only two species, with a potential third species being researched. Cycliophora are believed to be most closely related to the phylum Entoprocta – goblet animals – which is a phylum consisting of marine, colonial filter feeders. 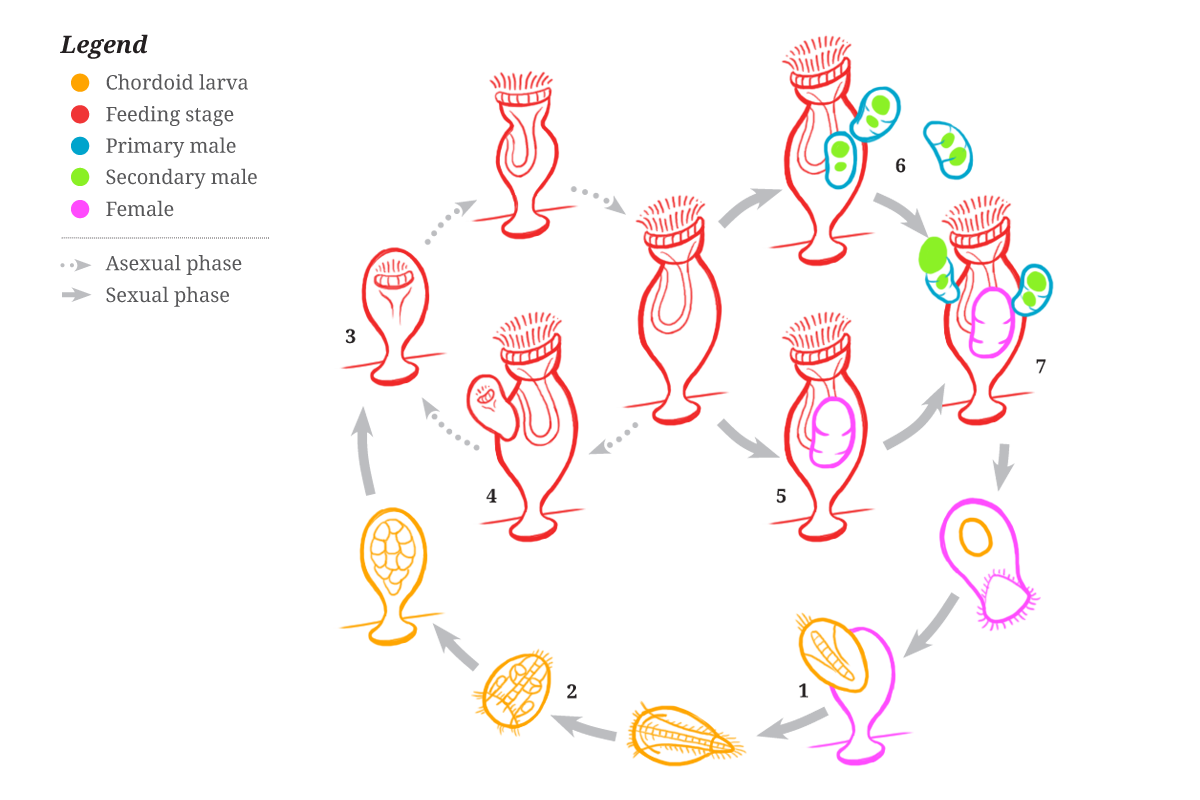 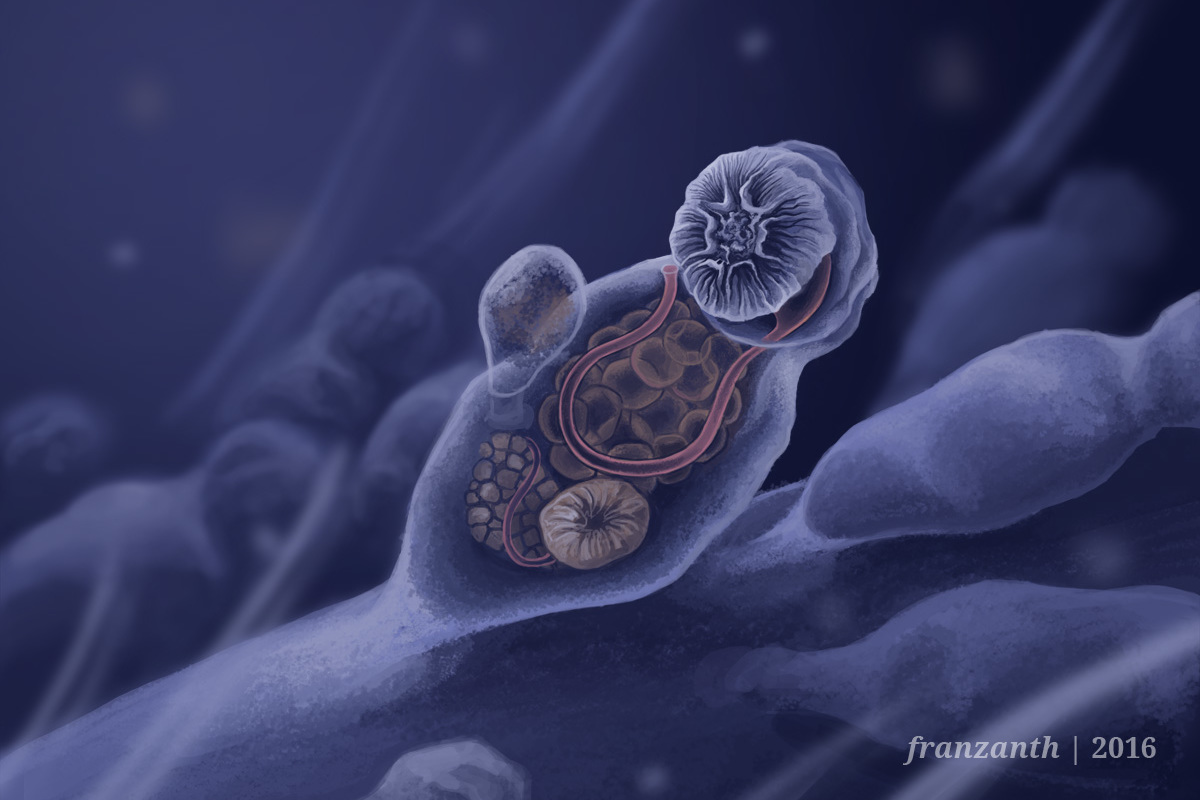 A symbion growing on a lobster's setae
Franz Anthony

Symbions have multiple life stages. The most recognizable and frequently found of these stages is the "feeder" stage, so called because it is the only stage in the symbion life cycle with a complete and functional digestive system. Approximately 0.3 mm in length, these organisms have a U-shaped digestive system, starting with a cilia-lined opening, leading to a funnel-like mouth, leading to the anus, which is found just underneath the mouth. The digestive system is broken down and reconstructed multiple times throughout the feeder stage, regrown from a posterior bud inside the animal. The body is filled with connective tissue instead of fluid, and it ends in an adhesive disk, used to connect the symbion to the lobster's seta. It is presumed that respiration occurs through diffusion through their body, as they don't appear to have specific breathing organs.

While it could be argued that symbions cannot possibly get any more unusual, many would retort that the most unexpected aspect of these organisms is their complex life cycle and reproductive behaviour. Symbions undergo many stages of life in their currently unknown lifespans.

Referencing the gallery figure, symbions begin life as a chordoid larva that emerges from the body of its dying mother (1). Mature female symbions only give birth to a single larva in their lifetime through sexual reproduction. The free-swimming larva travels away from the mother to find a new host (2) – depending on the species of symbion, this host can be one of three species of lobster; the common lobster (Homarus gammarus), American lobster (Homarus americanus), or the Norwegian lobster (Nephrops norvegicus).

Once they have found a suitable host, the larva settles on a seta and becomes a feeder, also known as the pandora stage of the symbion (3). These feeders collect food particles produced from the feeding of their hosts. Crustaceans are messy eaters, as they break food apart outside their mouthparts instead of inside them. The loose particles are collected with the tentacle-like cilia, which move food through the digestive system. The pandora symbions can reproduce in one of two ways: asexually or sexually. Typically they reproduce asexually, with new pandora forms emerging from buds within their body cavity (4).

Eventually, the population of asexual feeders will become too dense to be self-sustainable on the setae. When this happens, the asexual feeders will stop reproducing more feeders. Instead, their buds will produce two dioecious (different reproductive organ-possessing) types of symbion: a sexually mature female (5) and a primary male, known as the prometheus stage (6). These are produced one at a time, and are "born" in the same way that the pandora symbions are born.

The primary male is born with 1-3 secondary males – also called dwarf males – developing inside its body cavity, and resembles a choroid larva more than a feeder. Free swimming, the primary male lands on a feeder of a different seta that has a mature female developing in its body cavity. Upon finding one, the primary male dies, with the secondary males emerging fully matured and ready to reproduce (7). The exact nature of how symbions reproduce is still not entirely understood, but the male impregnates the mature female within the feeder's body, so that when the mature female emerges from the feeder, it is already prepared to spawn its first and only larva.

The mature female moves away from the feeder, settling closer to the mouth of the lobster host. Eventually, a cyst-like structure will form from the female's body, the chordoid larva will emerge, and the circle of life will continue.

Much is still left to be discovered about the nature of these organisms. For example, it is unknown why they are so host specific, or what their closest living relatives are. It is unknown why their digestive system is replaced throughout the feeder stage. It is also unknown why their life cycles are so complex, given their relatively simple behaviors and diets. What is known for certain is that symbions are a perfect example of the strangeness and diversity that is present in nature, as well as how it can be found in some of the most unexpected of places.


Related Stories
Until death do us part: relationshrimp goals
Cephalopod Eyes: Windows to an alien existence
Deepwater exploration of the Marianas
Hairy-footed “Hobbit” shrimp found in Indonesia
Chitons can see you
//sulc.us/f5syp
/articles/the-hitchhiker-s-guide-to-the-lobster-s-face/