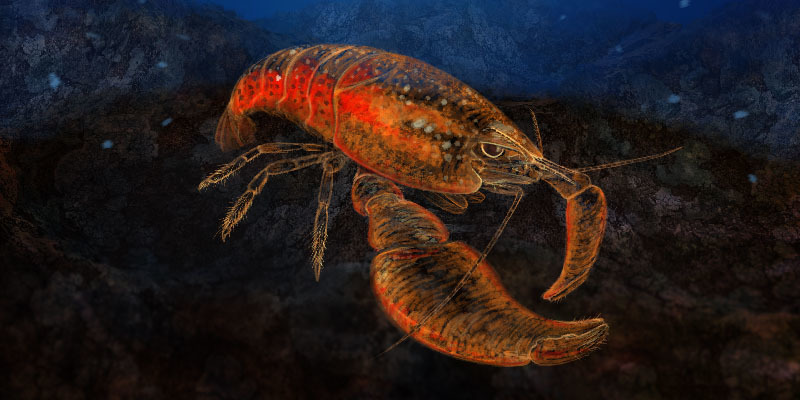 over 2 years ago by Franz Anthony

All Posts
The Hobbit shrimp joins the rank of crustaceans with intriguing names like the so-called ‘sexy shrimp’ Thor amboinensis — also found in the same waters — and the ‘Pink Floyd’ pistol shrimp Synalpheus pinkfloydi.

When given the honor to name this new species back in 2016, biologist Werner de Gier thought the name Odontonia bagginsi was an obvious choice. It’s very small. It hides at the far end of a bag-like animal. It has hairy feet like the Hobbit family of Baggins.

With this name, de Gier wishes to bring more attention to this often overlooked group of marine animals.

This particular shrimp was collected in Ternate, an island in east Indonesia known for its rich marine life in a joint expedition by the Indonesian Institute of Sciences (LIPI) and Naturalis Biodiversity Center of Leiden, Netherlands. The area, sandwiched between the reef-rich islands of Borneo and Papua, is thought to yield the combined diversity of west and east Indonesian reefs.

Though the four-week excursion that took place in 2009 focused on corals, the scientists also looked at other creatures that coexisted and interacted with them. The Hobbit shrimp was one of them.

“In total, there are about 4000 species of shrimps worldwide of which about 20% is known to live in symbiosis,” added crustacean expert Charles Fransen, who was also involved in the study.

Interestingly, each shrimp species lives in a close relationship with one specific host. Some of them live inside sponges or oysters, others hitchhike on sea urchins and sea stars. For the Hobbit shrimp, its preferred hideout is the body cavity of a vase-like creature that feels rubbery to the touch, a tunicate.

At this point, it’s hard to tell what the hairy feet are for. According to de Gier, “We can only speculate, but the hairs are probably just there for sensing. The interesting parts are in the dactyli [finger-like structures] of the legs, since every species is different in those structures.”

Other than the visibly hairy feet, it was this feature that signaled the researchers that this shrimp was new to science. Each symbiotic shrimp species evolved a different shaped “fingers” to grasp whichever host animal they choose to call home.

But it’s not always easy to tell a new species from others by eye. Odontonia plurellicola, another shrimp species described in the same publication, looks virtually the same to previously known Odontonia shrimps. Its giveaway was its exceptionally small size and the fact that it lives inside a host unlike its cousins, the colonial tunicates called Plurella.

This is where DNA analysis helps biologists ascertain the identity of creatures they’re working with. Such analysis also helps researchers map out the diversity and distribution of the animals, especially in the diversity-rich diverse marine area called the Coral Triangle in Southeast Asia.

“Naturalis has been doing research in Indonesia together with LIPI over the last few decades. We have looked at the marine biodiversity in many areas in Indonesia (Java, Bali, Ambon, Raja Ampat, East Kalimantan, SW Sulawesi, NE Sulawesi, etc.) and surrounding countries (e.g. Malaysia, Philippines),” adds Fransen.

It is expected that the inter-oceanic currents from the Pacific to the Indian Ocean and plate tectonics in the region have contributed to the movement and distribution of the marine region’s inhabitants.

In such a bustling underwater estate with thousands of species intermingling, it may take a while before we learn more about the life of a tiny shrimp and its hairy feet. The Hobbit shrimp might never come out of its comfy hole and head to a nearby volcano, but the region’s diverse cast of inhabitants will have more stories to tell.


Related Stories
Until death do us part: relationshrimp goals
The ugly-cute little monsters from the dark abyss
The many legged cave dragons of China
Deepwater exploration of the Marianas
The hitchhiker’s guide to the lobster’s face
//sulc.us/fu2ir
/articles/hairy-footed-hobbit-shrimp-found-in-indonesia/