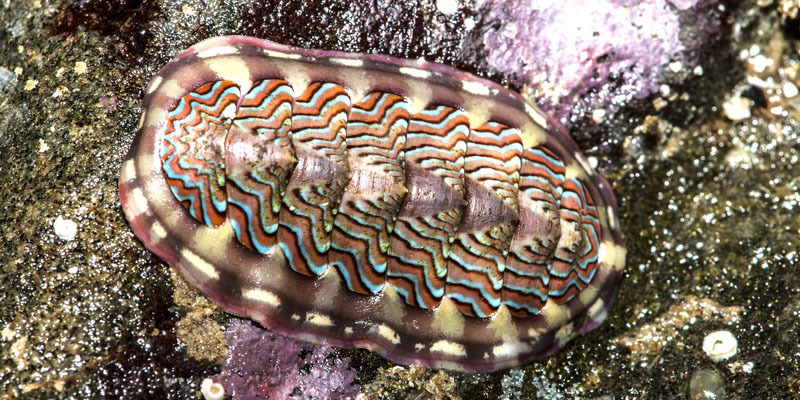 Chitons can see you

All Posts
Chitons have thousands of tiny lenses all over their shells that may work together to form a compound eye.

First time tide-poolers are often wowed by seeing animals that are completely unlike any others they’ve encountered. These animals restricted to marine environments include starfish and urchins as well as strange rock encrusting mollusks called chitons — which look a bit like a mix of armadillo and slug. Like slugs and snails, they have a fleshy foot that strongly holds onto rocks with a nearly unbreakable grip. With eight overlapping shells on their backs and a fleshy girdle encircling their bodies, chitons are not hard to recognize.

Little did we know, when we stare at the chitons, they’re also staring back at us. But how? There aren’t any visible eyes on the head anywhere on their body.

Early in life, chitons actually do have eyespots in their head region as young larvae, but they are lost within a month. The way they see is unlike any other animal: they can actually see through the shells on their backs! 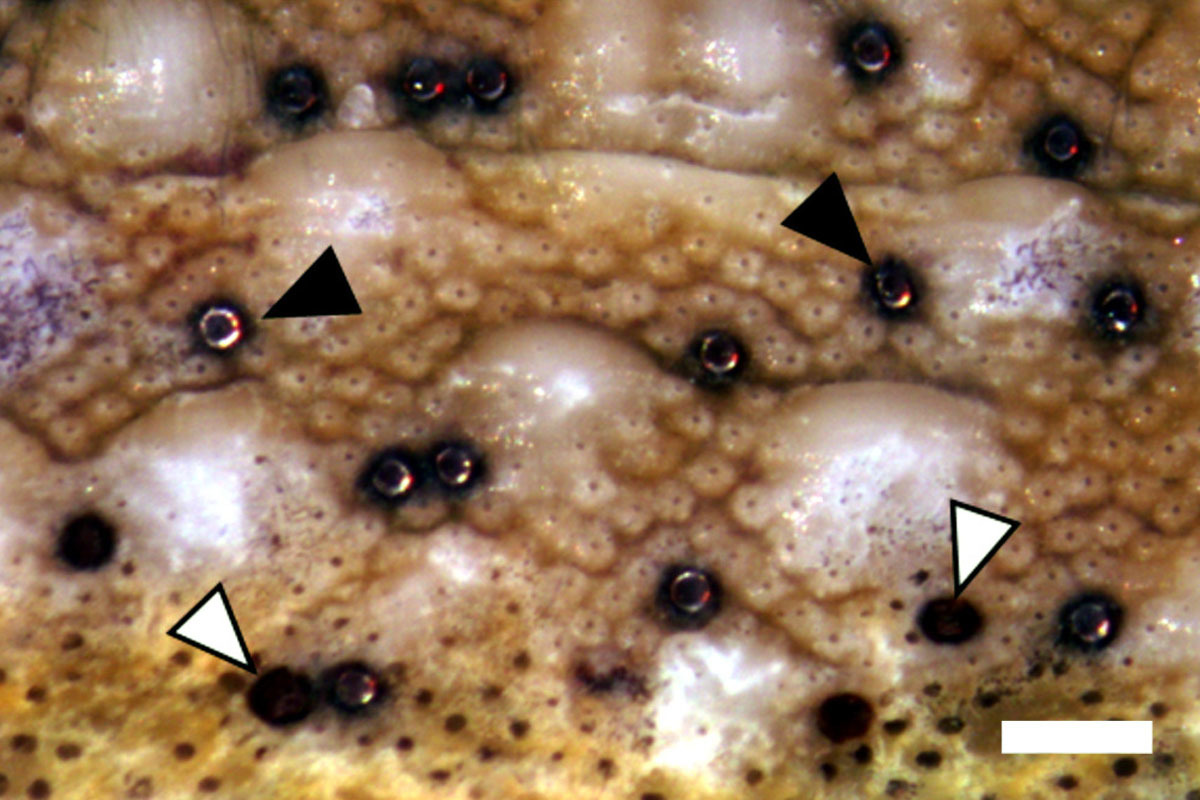 All chitons have light sensitive cells in their mantle--the tissue in all mollusks that secretes the shell. Unlike many other mollusks, chiton shells are translucent and their light sensitive cells can sense changes in brightness. Some chitons take this a step further and have hundreds or thousands of tiny, sand-grain-sized lenses, known as ocelli, embedded in the shells above retinas.

The many hundreds of lenses act together as a sort of compound eye. The images are interpreted by a fairly simple nervous system, resembling a ladder running down the back.

Just how well these eyes can see has been experimentally determined by Daniel Speiser and colleagues. In their experiment, chitons in aquaria are allowed to forage under diffuse light. Without warning, they were then flashed with dark circles of various sizes overhead. The chitons ignored the smallest circles, but almost instantly clamped down on the substrate when larger circles appeared. They also performed a test to see if the chitons were reacting to shapes themselves, or the darkness. When the overhead lights were suddenly lowered in intensity, the chitons didn’t react.

They determined that the chitons could only differentiate objects about 9-12° across; it’s about the equivalent to seeing an object the size of a soccer ball only when 125 cm (4 feet) from your eyes or closer! That’s not great for humans, but good enough to spot a bird or raccoon in time for a chiton to clamp down.

Speiser and colleagues also found that unlike most animal eyes, which have lenses made from proteins, the lenses in chitons are made from a mineral called aragonite. Aragonite is a form of calcium carbonate and is what forms most mollusk shells. They also found that the lenses have two stacked layers. Because of the different way light travels in air and water, the different lenses are able to focus images on the retina in both air and water and therefore can see at both high and low tide.

Because aragonite dissolves in acidic water, the ocelli erode over time. New ocelli are continually created as the shells grow.

Amazingly, Eernisse (2007) notes that these ocelli appear to have evolved two separate times in the Chitonidae and Schizochitonidae. Strangely, no fossil chiton ocelli are found in rocks older than 10 million years. This makes the compound eye of chitons the most recently evolved eye in any animal group, with most eyes hundreds of millions of years old!

Further work is needed to determine how and why the ocelli suddenly appeared in the fossil record. Speiser and colleagues note that there is no obvious ecological or climatic change 10 million years ago, but suspect that some unknown selective pressure was at work.


Related Stories
The hitchhiker’s guide to the lobster’s face
Carrying the world: the environmental burden on a snail’s shoulder
Deepwater exploration of the Marianas
Cephalopod Eyes: Windows to an alien existence
Until death do us part: relationshrimp goals
//sulc.us/i27sk
/articles/chitons-can-see-you/