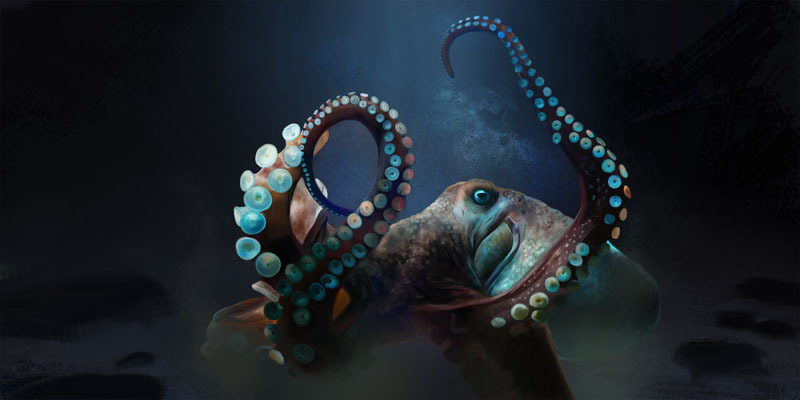 about 4 years ago by Rachel Fritts

All Posts
While human and cephalopod evolution diverged hundreds of millions of years ago, their eyes share a remarkable similarity with our own. One of the most intriguing examples of convergent evolution, cephalopod eyes are a window into the evolution of sight – and how the most intelligent invertebrates on the planet perceive the world.

Cephalopods, with their uncanny camouflage, writhing tentacles, and eerie intelligence, tend to take on a mystical quality in our stories and folklore. From the formidable giant squid in Twenty Thousand Leagues Under the Sea, to Paul the clairvoyant World Cup octopus, to Finding Dory’s color-shifting Hank, popular culture loves to paint our squishy undersea friends as crafty creatures with superhuman abilities. Whether our fascination is channeled into fear, admiration, or wide-eyed wonder, the secret to the appeal of cephalopods lies in their inherently ambiguous nature. While cephalopod intelligence and curiosity can at times feel remarkably human, their multiple grasping arms, versatile boneless bodies, and ominous underwater presence are as alien a vessel for intelligence as it gets (on this planet, anyway).

In some respects, our perception of cephalopods as aliens isn’t far off the mark. Evolutionarily speaking, human and cephalopod lineages diverged over 500 million years ago (to put this in perspective, the first dinosaurs hit the scene about 230 million years ago). On top of that, our tetrapod ancestors first crawled up out of the ocean nearly 400 million years ago. While some reptiles and mammals eventually decided to give salt water a second chance, humans have been knocking around up here ever since. Though the technologies of the last couple centuries have made the ocean more accessible to our landlubbing biology than ever before, it is still effectively an alien ecosystem. The “midnight” zone in particular, with its lack of sunlight, crushing pressure, and bizarre thermal vents, is famously more poorly explored and understood than the surface of the moon. And the biggest cephalopods of all, with eyes the size of dinner plates and giant hooked tentacles, are the ones who call midnight home.

Most squidgy undersea invertebrates recall a more simplistic time for animal life. Unassuming and passive, creatures like sea cucumbers, tube worms, and oysters have the look you’d expect from something that had climbed up out of the primordial soup, thought “this is far enough, thanks,” and hunkered down for the long haul. Cephalopods, on the other hand, developed complex nervous systems, arms that enable elaborate aquarium escape artistry, and, perhaps most unsettlingly of all, mammal-like eyes that have the audacity to stare right back at you. It is those big eyes, with their not-quite-right pupils, that beg the question, “How might an alien intelligence perceive the world? And, more importantly, how might it perceive us?” 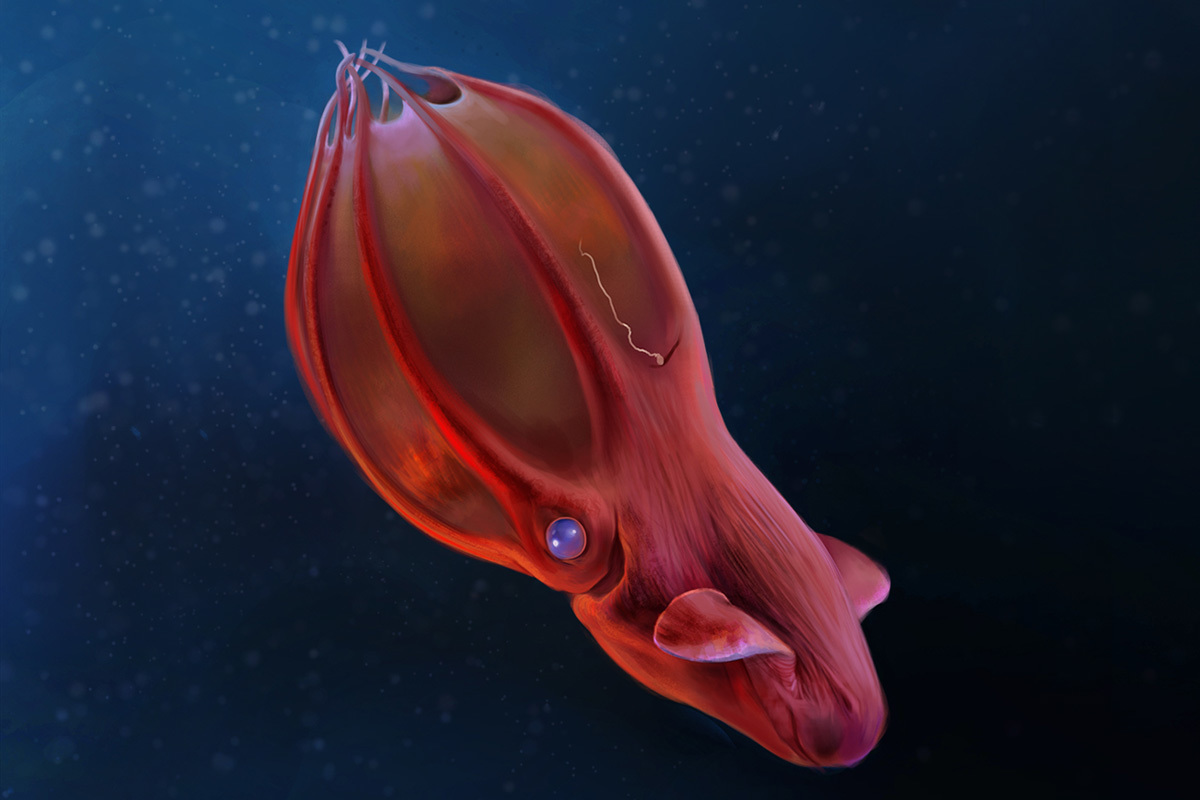 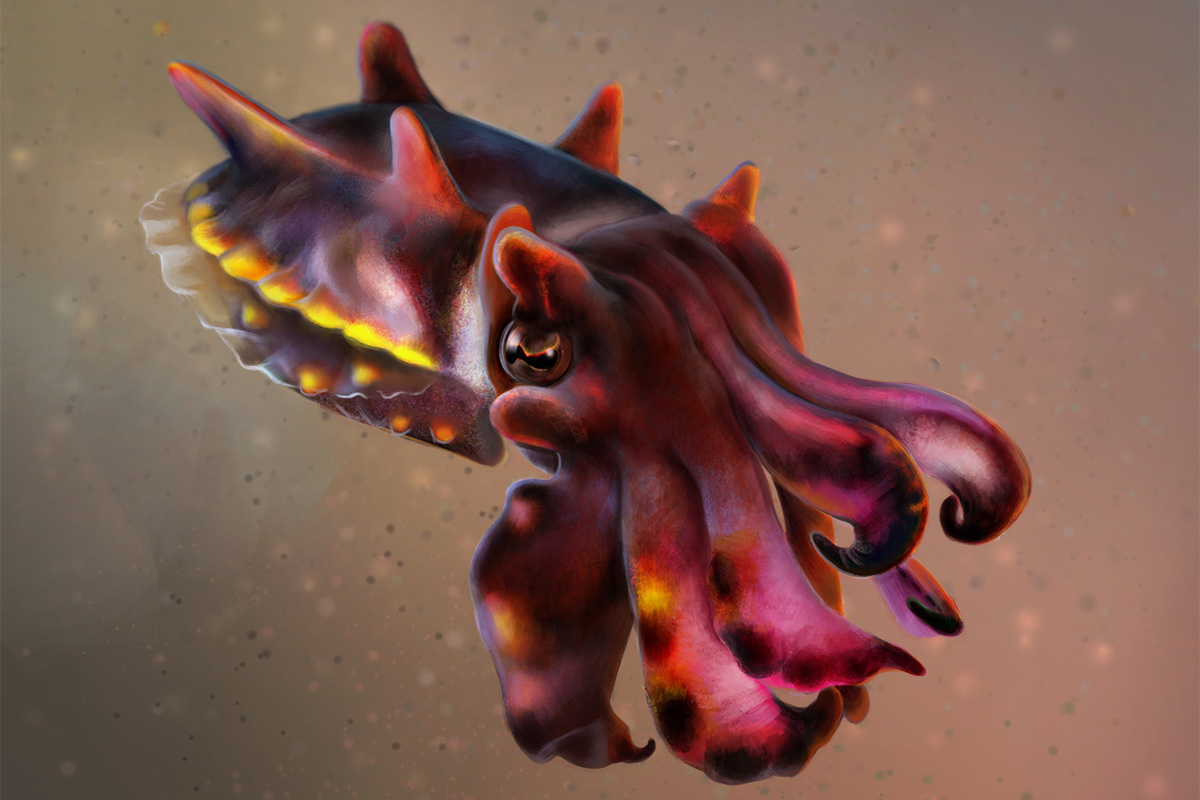 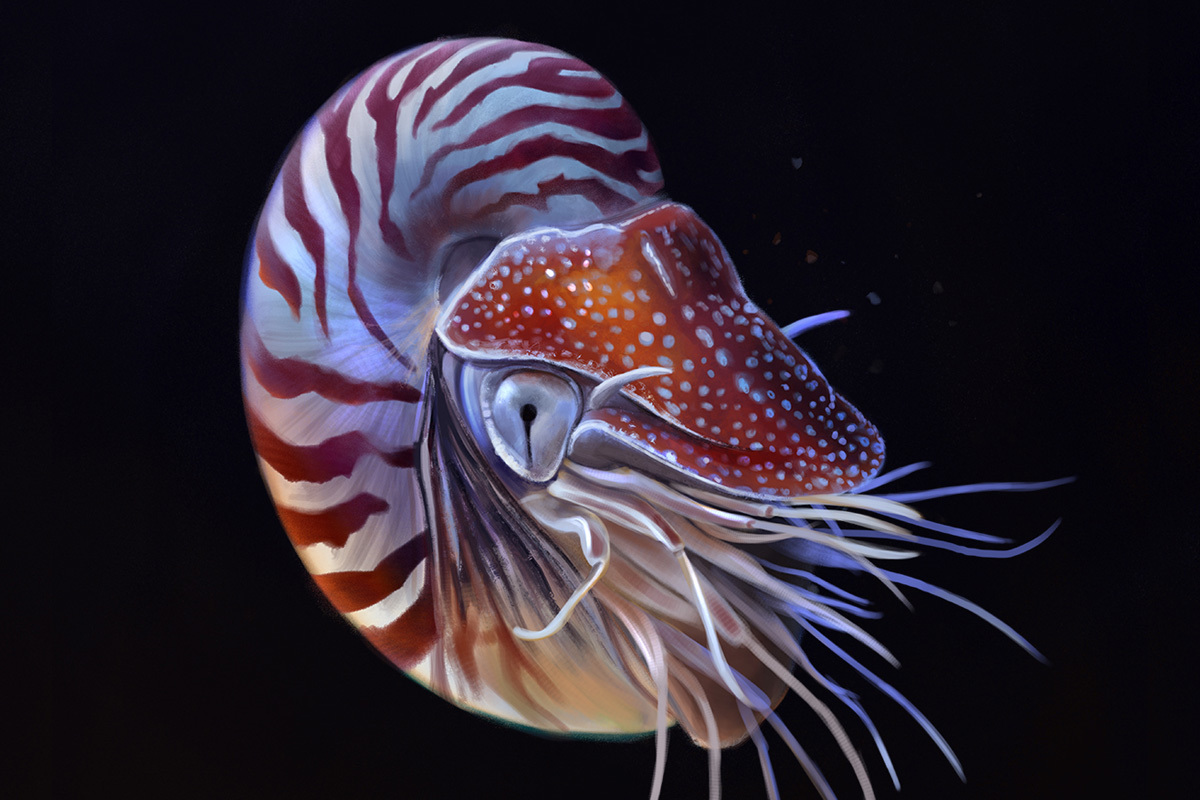 Those eyes have been fascinating scientists for years. So eerily similar to our own, they are an example of convergent evolution, the term given to similar traits evolving in unrelated lineages. Convergent evolution generally occurs due to similar environmental pressures or similar needs being met. While our ancestors evolved in a radically different environment to cephalopods, the end result was a camera-type eye comprised of the same basic components. How could this happen? Well, for starters, both types of eye are derived from the same handful of opsins – light-sensitive proteins in the cells of the retina – and the same “master control” gene – Pax6. These building blocks have been preserved since at least the Cambrian Period, and are present in all bilateral animals.

However, not all bilateral animals have camera eyes – not by a long shot – and neither mollusks nor chordates began developing anything resembling a complex eye until millions of years after diverging. This makes the similarity between human and complex cephalopod eyes eerily striking. Like humans, they have an iris that controls the amount of light entering the eye, a cornea that helps refract light to focus the eye, a lens that works with the cornea to focus light by changing its shape, and a light-sensitive retina at the back of the eye. Through Pax6 and a handful of ancient opsins, humans and octopuses, two species separated by hundreds of millions of years, are able to scrutinize the world in a remarkably similar way.

There is one key difference, however, that has had scientists scratching their heads. Cephalopods can mimic their surroundings in minute detail, fine-tune their movements to the rippling light of waves, and communicate through color – but they themselves are completely colorblind. Scientists were initially baffled upon the discovery that all cephalopods have only one color receptor. Humans have three color receptors in their eyes, which absorb small, medium, and large wavelengths on the color spectrum. All three must work together to perceive the entire spectrum, and if a human is missing even one, they are rendered effectively colorblind. Because cephalopods share our camera-type eye, it was assumed that their meager one color receptor must condemn them to a life in black and white.

This year, that assumption was challenged. Father-son team Stubbs and Stubbs put forward a new hypothesis: that the single color receptor present in the eyes of octopus, cuttlefish, and squid is not as limiting as our preconceived notions had led us to believe. It fact, they argue in their study, it might be an advantage for the sneaky underwater predators. Color vision loses its usefulness in low-light environments, which characterize most of the ocean. Instead, many ocean creatures take advantage of polarized light, which humans can’t detect. Cuttlefish are particularly good at perceiving polarized light, able to respond to little over a one degree shift in its orientation. However, perception of polarized light alone doesn’t account for the dramatic use of color in cuttlefish, octopuses, and squid.

Instead, the new study has discovered a third possible method of light perception – one that would explain those weird W-shaped pupils. The Stubbs duo believe that cephalopods could be taking advantage of a natural phenomenon called chromatic aberration, which blurs images while splitting white light into its component colors. While most animals have developed small pinpoint pupils for a crisper image, this new study indicates that cephalopods might have turned a fault into an asset, emphasizing the color-dependent blurring effect by having elongated, off-axis pupils. Along with the perception of polarized light, this could be the optimal strategy for discriminating between colors in either high-light or low-light conditions.

Scientists can be forgiven for assuming that cephalopod eyes would follow the same basic mechanism of human eyes, and would be limited by the same set of rules. But it could be time to rethink this assumption, and to accept there might be more to cephalopod vision than meets the (human) eye.