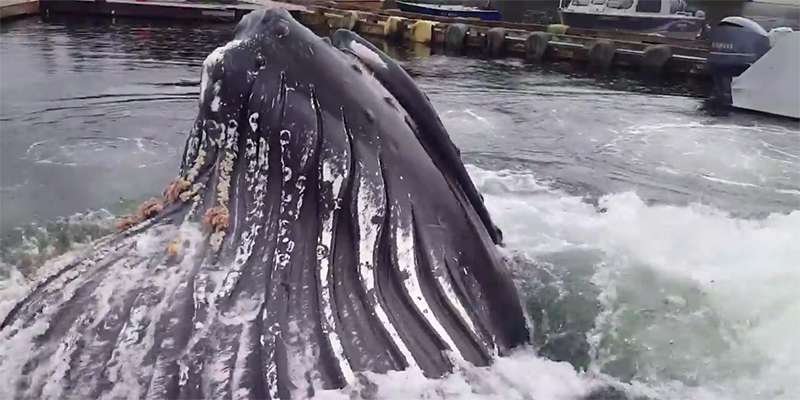 almost 5 years ago by Nick Garland

All Posts
A humpback whale got awfully close to a marina in Alaska. What you will see in the following video is an example of bubble-net feeding in a humpback whale. The hunting technique generally allows groups of humpbacks to eat their prey with less effort.

In the video, bubbles can be seen rising to the surface in a ring formation just before a massive humpback whale emerges out of the water with fish desperately wriggling away. With bubble-net feeding, a group of whales typically blows bubbles in a ring around a group of fish. They start in deeper water and drive the fish to surface, making the ring smaller as they ascend. The concentration of fish allows the whales to on many more fish and krill than they would normally collect just swimming in the open ocean.

Humpback whales migrate to the poles in the summer where they feed on fish and krill. In the winter, they make a trek to tropical and subtropical waters where they breed and give birth. Humpbacks do not feed in the winter but instead rely on their fat reserves. They travel on average 16,000 miles (25,000 km) every year during their migration.


Related Stories
Deepwater exploration of the Marianas
The hitchhiker’s guide to the lobster’s face
Forty million years of whale history
Cephalopod Eyes: Windows to an alien existence
Until death do us part: relationshrimp goals
//sulc.us/yx6un
/articles/humpack-whale-feeds-just-feet-from-dock/