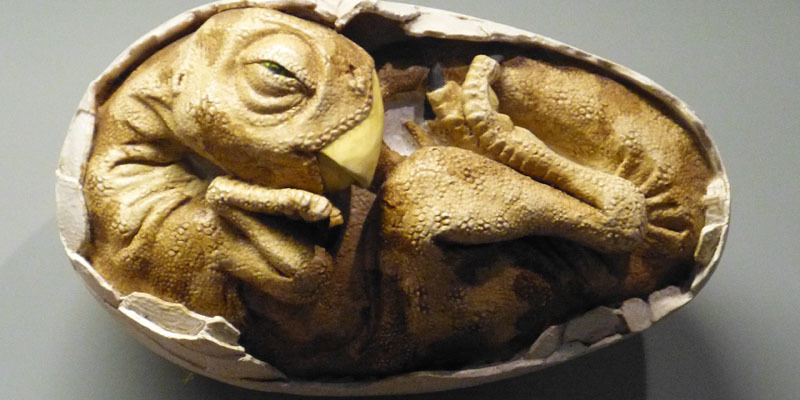 Were dinosaurs cold-blooded or warm-blooded? Actually, neither.

All Posts
By chemically analyzing fossilized eggshells and comparing them to the surrounding environment, scientists could take a glimpse at some dinosaurs’ body temperatures. They found them to be unlike both reptiles and birds, but rather something in between.

When they were first discovered, dinosaurs were immediately thought of as monstrous lizards; that’s where the -saurus part came from, after all. Eventually some smaller, clearly active species were found and the dinosaur-bird connection was made. That assumption shifted to that of dynamic, mammal- and bird-like animals with high metabolic functions.

In reality, most dinosaurs apparently didn’t fit into either category. A study that analyzed fossil eggs of two different kinds of dinosaurs yielded results that show they were neither ectotherms (“cold-blooded”, needing external heat sources to warm up and function) nor endotherms (“warm-blooded”, capable of generating their own heat and maintaining constant internal temperature). They were mesotherms, an intermediate between the two.

The team of researchers performed a chemical analysis of the fossilized eggs of a Mongolian oviraptorid (small, feathered bird-like dinosaurs with parrot beaks) and an Argentinian titanosaur (big, long-necked herbivores). With a total of nineteen eggs, they looked for the compositions of two isotopes normally found in eggshells: oxygen-18 and carbon-13.

The lower the temperatures, the more these elements cluster together, so by studying the amount of clumping scientists could accurately estimate the temperature of the eggshells and consequently of the mother’s body at the time of laying. They also checked the surrounding rock matrix to find out the environment’s average temperature.

The researchers believe the difference in temperature is due to the size disparity of the two species. The titanosaurs were so huge, and had such big heat-producing digestive systems, that their bodies could produce enough heat to keep them warm without needing to bask in the sun. Actually, for them it was the opposite: losing heat was probably more of a priority, so as to not overheat.

Even though the titanosaur’s temperatures were close to that of a “warm-blooded” animal like a mammal, the scientists involved in the study believe this is a case of gigantothermy: when a non-endothermic animal produces heat simply because of its sheer size and not through internal bodily functions. This can be seen in giant leatherback sea turtles that are able to swim in frigid waters. They have much lower metabolic rates than a mammal of the same size, but are able to generate enough heat to stay warm and live where no other modern reptile can.

big surprise, however, came with the oviraptorid’s results. Being so close to birds, they were expected to have a similar ability to regulate body temperature. Instead, they were considerably lower than a bird of the same size (the average temperature of a chicken, for example, is around 40ºC or 104ºF), but still higher than the environment.

That means even though the oviraptorids were capable of producing some heat and raise their temperatures above those of their surroundings, they weren’t fully endothermic like mammals and birds. Rather, they have intermediate metabolisms.

The conclusion of this study is that birds possibly evolved an endothermic metabolism much later than originally thought, and that most dinosaurs were mesotherms even though there may have been considerable variation in body temperatures among different species due to size, behavior and habitat.