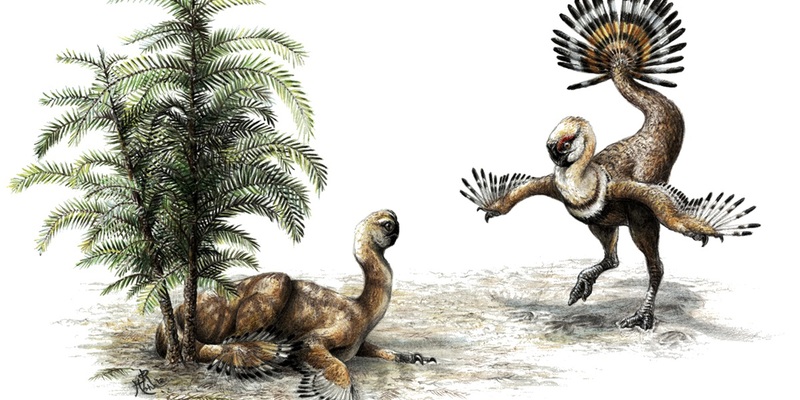 Dinosaur Romeo and Juliet: the fossilized lovers that died together

All Posts
A pair of bird-like dinosaurs that died and were buried together have successfully been identified as a male and female pair in one of the first cases of paleontologists identifying a dinosaur’s sex.

The first discovery of the dinosaur Khaan, unearthed in the Mongolian desert, consisted of two individuals that had been buried close together. It's likely that they died after some heavy and sudden rains caused a sand dune to collapse on top of them. The duo were promptly given the nicknames “Romeo and Juliet”, due to the similarities with Shakespeare's death-bound lovers, even though at the time of the discovery their sex had not been identified.

Initial analysis suggested that they were members of the group Oviraptorosaurs—parrot-beaked and mostly toothless dinosaurs once thought as robbers of other dinosaurs’ eggs. Nowadays, they are known to have been feathered and similar to turkeys. Khaan mckennai was a 4-foot long Oviraptorosaur that lived during the Cretaceous period around 75 million years ago, and those fossils would bring a surprise for the paleontologists who found them.

The nicknames came to fit them very well, because further analysis of the fossils showed that apparently they were, indeed, a couple. The researchers from the University of Alberta who worked with the skeletons were adamant with this conclusion. Even though both specimens were around the same size and age and had mostly identical anatomies, there was one key difference between them: the tail bones.

While one of them had larger and unusually shaped bones creating a longer tail, the other had the opposite features. By comparing this feature with modern birds for a likely explanation, the researchers realized that they were looking at a male with a fancy tail, like a pheasant or peacock.

Other Oviraptorosaur species have been found with impressions of long feathers attached to the end of their tails, but no such correlation had yet been conclusively made between them and the animals' sex. These new fossils suggests that the feathers could indeed be part of the males’ courtship repertoire.

Romeo’s tail was more flexible and had a stronger musculature, ideal for showing off a colorful fan like many of today’s ground birds. Juliet’s, on the other hand, was shorter and likely had simpler feathers. The shorter spines of her tail vertebrae may also have increased the space needed for laying eggs. This knowledge may be used in analysis of other dinosaur species to help identify males and females as well.

Birds are the living descendants of small dinosaurs similar to Khaan and so it's expected that many of the characteristics we see in them today were already present in their prehistoric ancestors.


Related Stories
The swimming raptor of Mongolia
Dance of the dinosaurs
Dinosaur feathers in Canadian amber
Were dinosaurs cold-blooded or warm-blooded? Actually, neither.
Murusraptor, a megaraptoran theropod from the Late Cretaceous of Patagonia
//sulc.us/svmhk
/articles/romeo-and-juliet-fossils-offer-insight-into-dinosaur-romance/