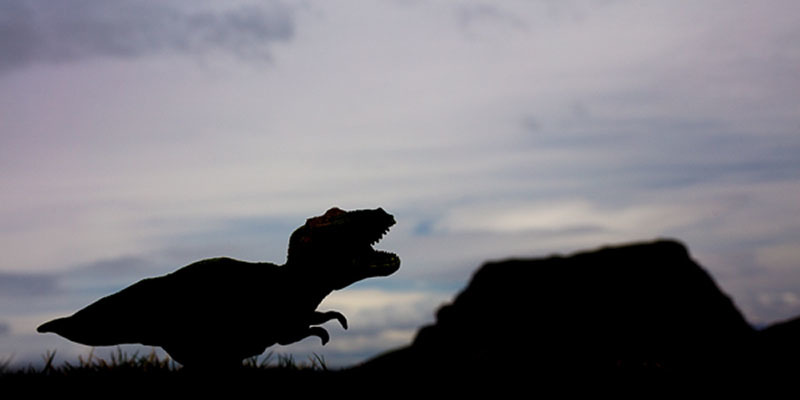 Walking in the footsteps of dinosaurs

over 2 years ago by Jason Gilchrist

All Posts
The recent discovery of a dinosaur trackway site on the Isle of Skye, Scotland, provides insight into “a day in the life of a bunch of dinosaurs just loitering about, 170 million years ago” according to paleontologist Dr. Steve Brusatte of the University of Edinburgh School of Geosciences.

It was late in the day when I arrived at the site. It had been a long drive. But the scenery of the Scottish Highlands along the way and excitement upon my arrival compensated for any tiredness. I staggered down a winding dirt track, eroded by generations of sheep, toward the sea, leaving the imposing dark hills behind me. I searched, I looked, I cursed. I could not find what I was looking for.

The Brother’s Point (Rubha nam Brathairean) site is dramatic, with a 1.5km walk-in across treeless farmland. Brother’s Point reveals itself as an exposed promontory and the most easterly point of the Isle of Skye’s geologically dramatic Trotternish Peninsula.

To the north lies Kilt Rock, with its dramatic cliff-top waterfall. Inland and to the west are the world-famous Quiraing (a series of plateaus, cliffs, and rocky protrusions) and the finger-like rock pinnacle that is the Old Man of Storr. To the south, Lealt, site of an abandoned diatomite works, where a multi-use rock formed of fossilized golden-brown algae was mined. Views to the east look across to the coastline and mountains of Wester Ross on the Scottish mainland. 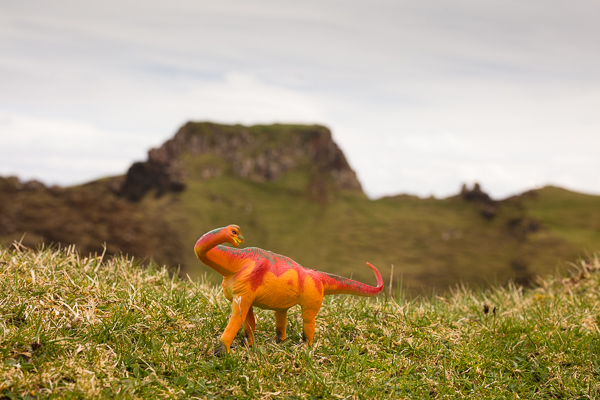 
The headland is topped by the rocky protrusion of Dun Hasan, site of an ancient settlement and subsequent medieval fort. The origin of the name of the site (Brother’s Point) is uncertain but is thought to be linked to monks a thousand or so years ago.

This is all very distracting because I am here to see dinosaur footprints.

The site was recently described by paleontologists from the University of Edinburgh in a scientific paper published in the Scottish Journal of Geology. 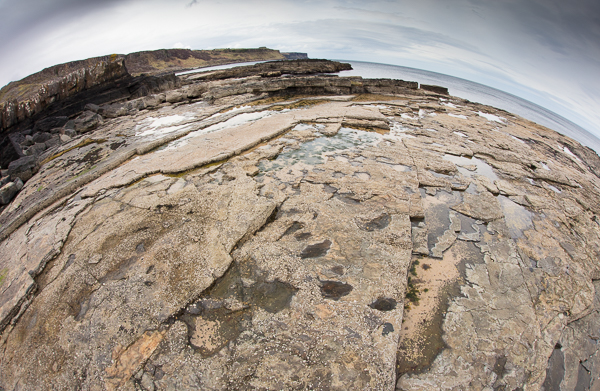 
The fossil find is important because it provides insight into the everyday behavior of a dinosaur community, but also because it extends the duration of dinosaurs living in Scotland and contributes to the globally dinosaur scarce Mid-Jurassic geological period.

Hot on the heels of the publication and accompanying news coverage, and with my great interest in dinosaur footprints, I could not resist paying the site a visit. It is not the first time that I have visited the Isle of Skye with dinosaur fossil footprints a major draw. My last visit to Scotland’s Dinosaur Isle involved a trip to the An Corran theropod trackway where I met up with Skye’s own Mr. Dinosaur, Dugald Ross, curator of the Staffin Dinosaur Museum, home to the world’s largest collection of Scottish dinosaur finds.

The Brother’s Point dinosaur footprint site lies on a limestone rock plain in the tidal zone on the left before reaching Brother’s Point itself. Timing is crucial – the site, and its footprint treasure are only exposed at low tide. If that sounds inconvenient regarding visiting the site, consider the problem it posed to the paleontologists surveying the site.

Throw in challenging weather conditions, and the fact that the rocks are always slippery, with water, algae and seaweed, and an appreciation of what the paleontological team had to contend with descends. Lead researcher Paige de Polo invented a bespoke handmade 3-D camera rig to map the 50-odd tracks amid challenging weather and changing tides on the rocky shoreline where the footprints were discovered.

Looking down from the ridge of the grassy clifftop approximately 20 meters above the trackway, even at low tide, one can be forgiven for questioning where the footprints are. They are not obvious to the untrained eye, and even when walking amongst the depressions in the stone, few are of an obviously dinosaurian origin. I spent some hours on the site, the day after my initial visit, and I ended up doing some impromptu tour guiding as other visitors were unable to find and recognize the footprints. “Where are the dinosaur footprints?” and “Have you found any dinosaur footprints?” were a couple of opening lines.

While most visitor’s eyes lit up and were enthused upon having the more recognizable circular elephantine tetradactyl (4-toed) sauropod prints and bird-like triangular tridactyl (3-toed) theropod prints pointed out to them, one or two looked at me with an unconvinced expression. I think they thought that I was making it up. 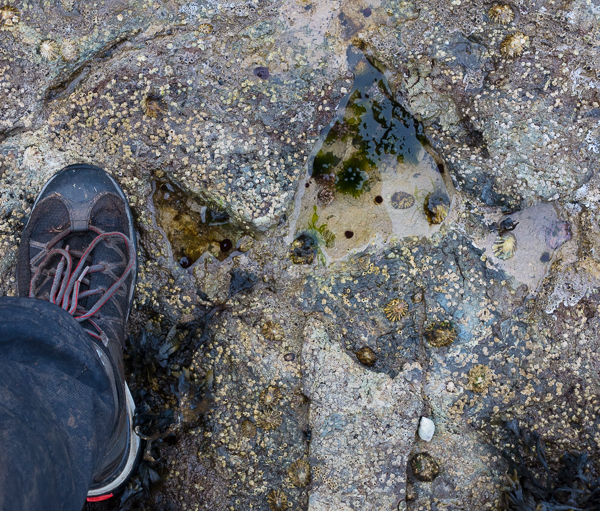 Tridactyl theropod footprint. In addition to the 3 toe prints (with claw prints), also note the metapodium print (the elongate extension behind the middle toe) – this indicates that the carnivore took a rest here – leaning back on its haunches. Image by Jason Gilchrist.


The majority of the impressions are difficult to differentiate from the rockpools that you will find on many a rocky shoreline. The reasons for this are three-fold. Firstly, how clearly defined a footprint is (for anything, not only dinosaurs), depends upon the substrate at the point that the animal stepped there.

Secondly, the impression is influenced by the environment after the footprint has been made. Does it dry out, is it wet, does wave or wind in-fill the prints? How often do you come across a pristine deer or fox or badger track? How often do you see an animal footprint in the sand or mud and not be sure what made the print? Now add 170 million years of geological activity, and the erosive influence of climate, weather, limpets, and barnacles. Oh, and don’t forget the obscuring presence of seaweed. If anything, it is a minor miracle that today we have recognizable dinosaur footprints at all.

For the non-expert, finding dinosaur footprints at Brother’s Point means looking for the distinctive prints, with a shape that matches the characteristic foot impressions of sauropods and theropods. There are nice clear examples if you look hard enough. Then let your imagination fill in the gaps.

For me, nothing on Earth can compare to the feeling that you get standing looking at the very patch of ground that a great dinosaur stepped on. In this case, approximately 170 million years ago.

Think about that. Viewing fossil dinosaur bones and skeletons in a museum is all well and good (I love doing that as well). But consider standing where a dinosaur stood, and seeing the evidence, its footprint in front of your own eyes. And you can touch it. Touch the impression made by a dinosaur that walked this way. 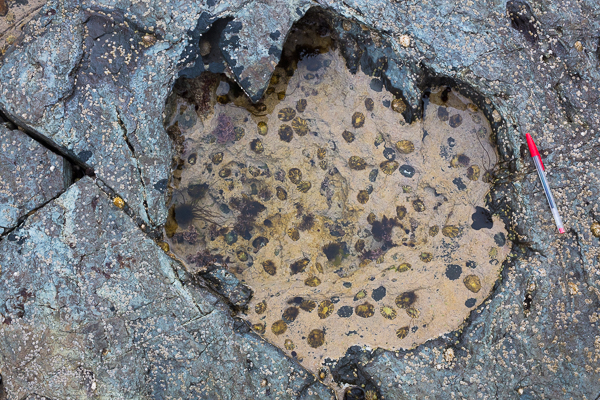 
So, what do the dinosaur footprints tell us?

It is not possible to identify the dinosaur species that make footprints. Paleontologists studying trace fossils, paleoichnologists, do however assign footprints to ichno-genera based upon their shape. Of the Brother’s Point footprints, the sauropod prints were assigned to Breviparopus, and the theropod prints to Eubrontes.

The sauropod prints vary in size, the largest distinct print measures 67 cm by 50 cm, with a surface area of over 1m2. Get a measuring tape or ruler out on your floor and see how big that is. It is bigger than an African elephant’s footprint (generally 40-50 cm across), which weighs 6000 kg.

I have been charged by an elephant. I have almost been caught in an elephant stampede. You don’t want to get too close to something or a group of something that big. From the footprint, height at the hip is estimated at 1.5-2 m. That is about the height of an average human.

The Brother’s Point dinosaur track site with visitors seeking out the footprints. Image by Jason Gilchrist.


Based upon the theropod footprints, the carnivorous dinosaurs hanging around the lagoon had a height at hip between 87 cm and 213 cm. The largest tridactyl print measuring 52 cm in length and 48 cm wide, is equivalent to the largest An Corran theropod footprint. I estimated the An Corran printmaker to weigh in the region of 3318 kg, equivalent to two white rhinos. That is a big and heavy predator.

In combination with the Edinburgh University team’s previous major dinosaur fossil footprint find, further north on the island at Duntulm, the study tells us about the environment inhabited by the dinosaurs. The science literally paints the picture of the lagoonal habitat that the sauropods hung out in.

The Brother’s Point footprints also present further evidence that dinosaurs were not “too big to walk.” The aquatic dinosaur theory, that dinosaurs almost exclusively lived in water and swam rather than walked, has recently and controversially found popular traction through Brian J. Ford. This theory is contrary to a wealth of scientific evidence and has been historically discredited by paleontologists. Researcher Steve Brusatte said, “Dinosaurs could move on land – there are millions of dinosaur footprints around the world that prove it”. The Skye dinosaurs were neither floating nor swimming. 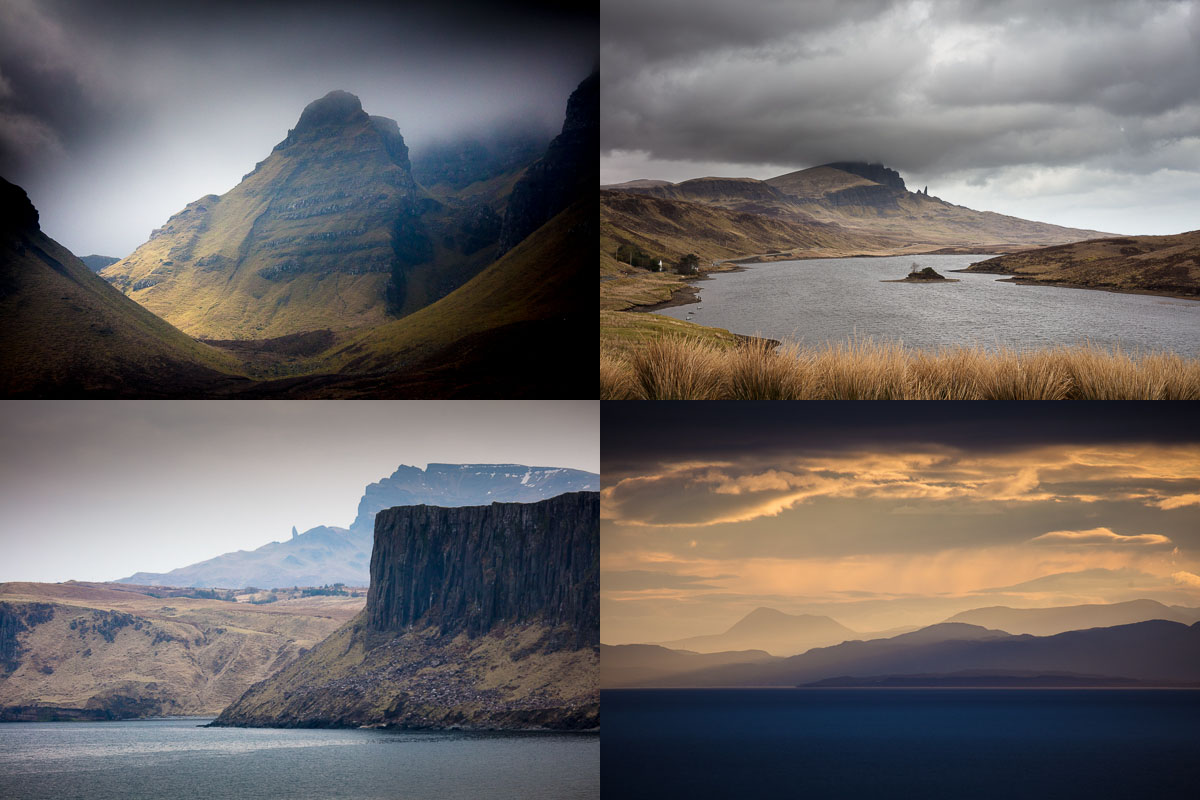 
As for the “Dinosaur Disco” at Duntulm, the random orientation of the footprints at Brother’s Point indicate that these dinosaurs were neither in a hurry nor going anywhere in particular. They were simply hanging out, loitering in the lagoon.

Applying the formulae of dinosaur track expert Dr. Tony Thulborn to the Brother’s Point footprints, the sauropods were likely moving at 3.4 to 4.3 km/h and the theropods, between 0.5 and 1.7 km/h. These speeds are slower than an average human walking speed (~ 5km/h).

As recently summarized by Dr. Neil Clark of The Hunterian, University of Glasgow, fragmentary dinosaur body fossils have also been discovered across Skye in recent years. These include bones and teeth, and a recently excavated theropod tooth from Brother’s Point that Steve Brusatte showed me.

But there is something about fossil footprints that hold a different mystique. Maybe it is because they represent the animal in life rather than death?

The authors of the paper suggest that the rocks of Skye have a lot more to give, in terms of fossil finds and an insight into the environments and animals that inhabited the area in the Mid-Jurassic.

Fossils of a wider vertebrate fauna, both marine and terrestrial, have been discovered on Scotland’s Dinosaur Isle. These include ornithopod dinosaurs, sharks, bony fish, ichthyosaurs, plesiosaurs, turtles, frogs, salamanders, lizards, crocodiles, pterosaurs, and mammals. While fragmentary, these fossil finds point to a diverse and busy ecosystem. 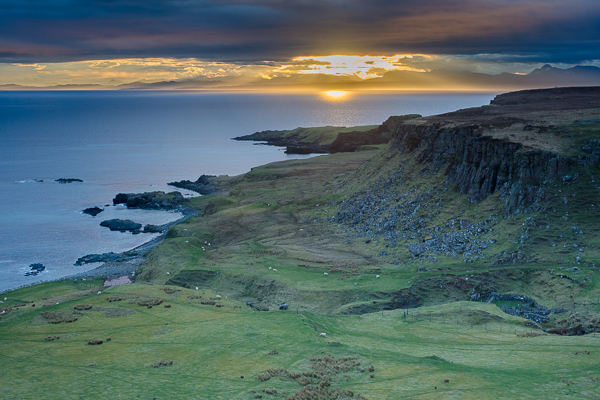 Sunset over Brother’s Point, with the dinosaur trackway covered by high tide. Image by Jason Gilchrist.


I ended my visit, standing at Brother’s Point, with the light fading. The sky darkened above, storm clouds gathered, and a chilly wind whipped up as icy rain started to fall upon me. I envisioned the scene back in the mid-Jurassic, 170 million years ago. The local dinosaur community, a mix of dinosaur species and ages, some living in family or communal groups, doing its stuff among the other animal and plant species occupying the sun-drenched tropical lagoon.

We live in exciting times. While we may not have giant dinosaurs wandering the Earth today (big birds excepted), we have an increasing attention toward those special rocks of the Scottish Isles. The hot-off-the-press discovery by Neil Clark of the first dinosaur footprints on the Scottish mainland further indicate Scotland’s growing global importance in interpreting the history of the dinosaurs. There is more to come. Watch this space.

Read the original research in the Scottish Journal of Geology.