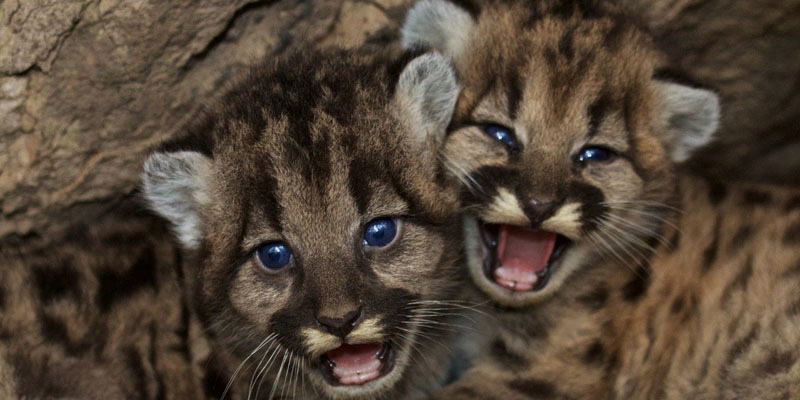 over 6 years ago by Julio Lacerda

All Posts
Cougars coexisted with five other big cats in North America during the last Ice Age, and while other species perished it managed to survive. The secret of its resilience may have been a lenient diet.

The last Ice Age was a period of colder temperatures and drier climates starting around 3 million years ago and gradually coming to an end a little more than 10,000 years ago. The rising of temperatures at the end of this period coincided with the extinction of several big animal species, or megafauna, though it is still not known what were the exact causes of their demise.

While many animals disappeared from North America in the last few thousand years, others survived and thrived. The cougar, also known as mountain lion and puma, is one of them. And a team of researchers may have discovered why the cougar survived while other big cats weren’t so lucky.

Ryan Haupt and Larisa DeSantis from the University of Wyoming analyzed the microscopic wear present on the teeth of modern and fossil cougars, as well as other species of big carnivores, living and extinct. These marks left on the teeth of predators can tell a lot about how and what they ate during the last few weeks of their lives. For example, animals that mostly consume the softer flesh of their prey have small scratches on their teeth, like cheetahs. Others that routinely eat bones have deeper abrasions, as is the case for hyenas.

Haupt and DeSantis found that the American lion was a picky eater akin to cheetahs today, preferring to eat only fresh meat and avoiding the hard parts of a carcass. The saber-toothed cat Smilodon did consume bones occasionally, but different individuals of the species showed little difference in their tooth wear between each other, suggesting a dependency on a specific diet. The fossil cougars, on the other hand, presented evidence of a very diverse feeding strategy.

While some had little wear on their teeth, others had similar results as modern hyenas. This means that in general, cougars could take advantage of every food source available. Their competitors were either too picky or too reliant on prey animals whose populations began to dwindle in a domino effect that caused their extinction. This is consistent with both the tooth wear and the known behaviors of modern cougars.

Cougars are now some of the most widely distributed mammals in the Americas, living from Canada to the South American Andes. They can eat anything from rodents to deer including carrion, and act differently depending on the environment in which they are found and the predators that they share their habitat with. Haupt and DeSantis’ results show that this generalist practice was already present in cougars thousands of years ago.

In times of ecological turmoil, being an opportunist that can survive on a myriad of food sources raises your chances of success. We can see that by looking at species that managed to survive mass extinctions, and the cougar is one of those. On the opposite side of the spectrum, specialized predators like the cheetah are less likely to get through disruptions in the ecosystem and are even more fragile against human impact on their habitat, requiring greater attention from conservation efforts.