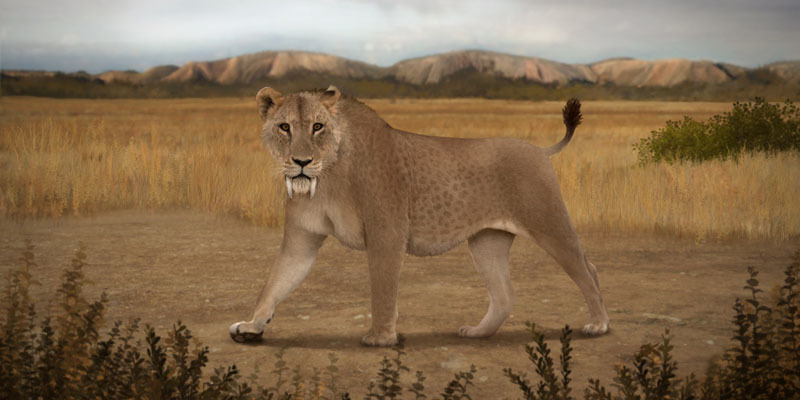 All Posts
The robust forelimbs of saber-toothed cats are thought to have helped wrestle struggling prey to the ground before using their long teeth to slash a killing blow. This burly build was needed to ensure the long teeth weren’t broken by struggling prey.

One of the most well-known and charismatic mammals from the Ice Age of North America is the saber-toothed cat, Smilodon fatalis. Famous for its oversized teeth, Smilodon is also notable for its extremely robust and muscular forelimbs. Smilodon and other saber-toothed cats are thought to have ambushed prey and wrestled it to the ground, using their heavy bodies and strong forelimbs to immobilize the unlucky victim. From there, they used their long teeth to slash killing wounds. Struggling or bucking prey would have been very dangerous for such long-toothed predators, possibly breaking its teeth, so they needed very strong forelimbs.

Living big cats have comparatively thin, or gracile, limb bones, that get more gracile as they grow up. In contrast to the pattern in living cats, saber-toothed cats were suspected to have grown more robust as they reached adulthood. Research on Smilodon published by Katherine Long and colleagues in 2017 aimed to determine if that was actually true.

They studied every complete limb bone of Smilodon discovered at Rancho La Brea, in Los Angeles, including many kittens. They compared the Smilodon bones to living cougars, lions, and tigers, as well as the extinct American lion, Panthera atrox. Their results confirmed that the forelimbs of Smilodon adults were much more robust than similarly sized lions and tigers. They also found that P. atrox grew more gracile as it grew up, as expected.

Surprisingly, they found that Smilodon grew less robust as it aged, just like other cats and contrary to previous hypotheses.

Coauthor Donald Prothero explained, “We found that their limbs don’t become more robust as they grew up, but instead retain the stereotypical growth pattern where the limbs grow longer more quickly than they grow thick. To compensate, saber-tooth kittens were born with unusually robust limbs and retained that pattern as they grew.”

This pattern of becoming more gracile as they grew older appears to common to all cats, regardless of how gracile or robust they are as adults. Long and colleagues noted that this pattern of development appears to be very difficult to be modified through evolution, an example of something called canalization.

This new research shows that despite being one of the most well-known fossil mammals, there is still much to be learned about the life and lifestyle of Smilodon. Future research will surely uncover more surprises, as we get an ever fuller picture of the ancient world.

Read the original research in PLOS ONE.


Related Stories
Stegodon, the “elephant” with sideways trunk
The giant armadillos of the Americas
The last camels of North America
What would you get if you mixed a dog and a bear?
Saber-toothed cats once hunted in South America
//sulc.us/tex0y
/articles/saber-toothed-kittens-were-born-bruisers/