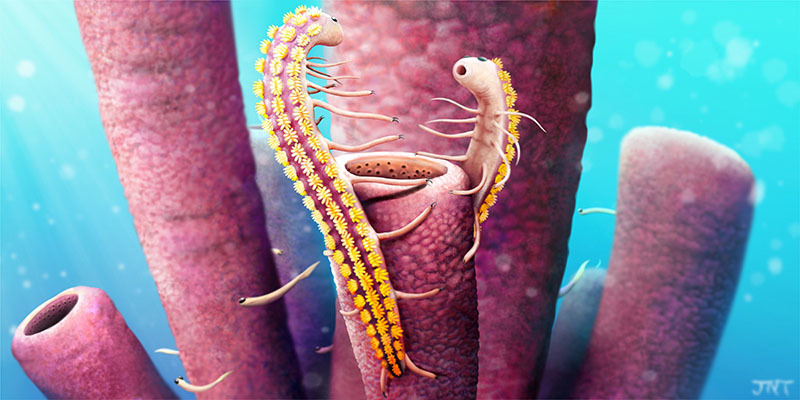 All Posts
Scientists have found a relative of the famous “dream maker” of the Cambrian Explosion, Hallucigenia. Instead of a back covered in spines, it was covered in a carpet of flower-shaped ornaments.

Researchers have discovered a new species of ancient marine worm, Thanahita distos, from rocks dating to the Silurian Period. The fossil worm comes from a site in western England called the Herefordshire Lagerstätte. Thanahita and the other marine animals found here are fossilized in three dimensions rather than being pancaked like most other invertebrate fossils.

Thanahita, at about 3 cm long (just over one inch), had a tube-shaped body with at least nine pairs of legs ending in one or two tiny claws. Each leg looked like a curving spaghetti noodle, with the two pairs on the neck being smaller than the others. The back of Thanahita was covered in a strange and wonderful pavement of tufts. Each tuft resembled an individual Dahlia bloom and sat atop a low pedestal rising just a few tenths of a milimeter above the surface of the back. The tufts are arranged in a grid, four columns wide, with about four rows of tufts per leg segment running the whole length of the body. Only one specimen is known of Thanahita, and unfortunately its head is missing.

To discover the fine anatomical details of this small soft-bodied worm the team of researchers, led by Derek J. Siveter, had to destroy it. Although it’s exquisitely preserved, it was impossible to remove the fossil from the surrounding rock. Instead, they carefully ground the specimen at 20 μm intervals in the laboratory. After each pass, the ground surface was photographed, and those photographs were digitally combined to create a 3D virtual model of the worm. 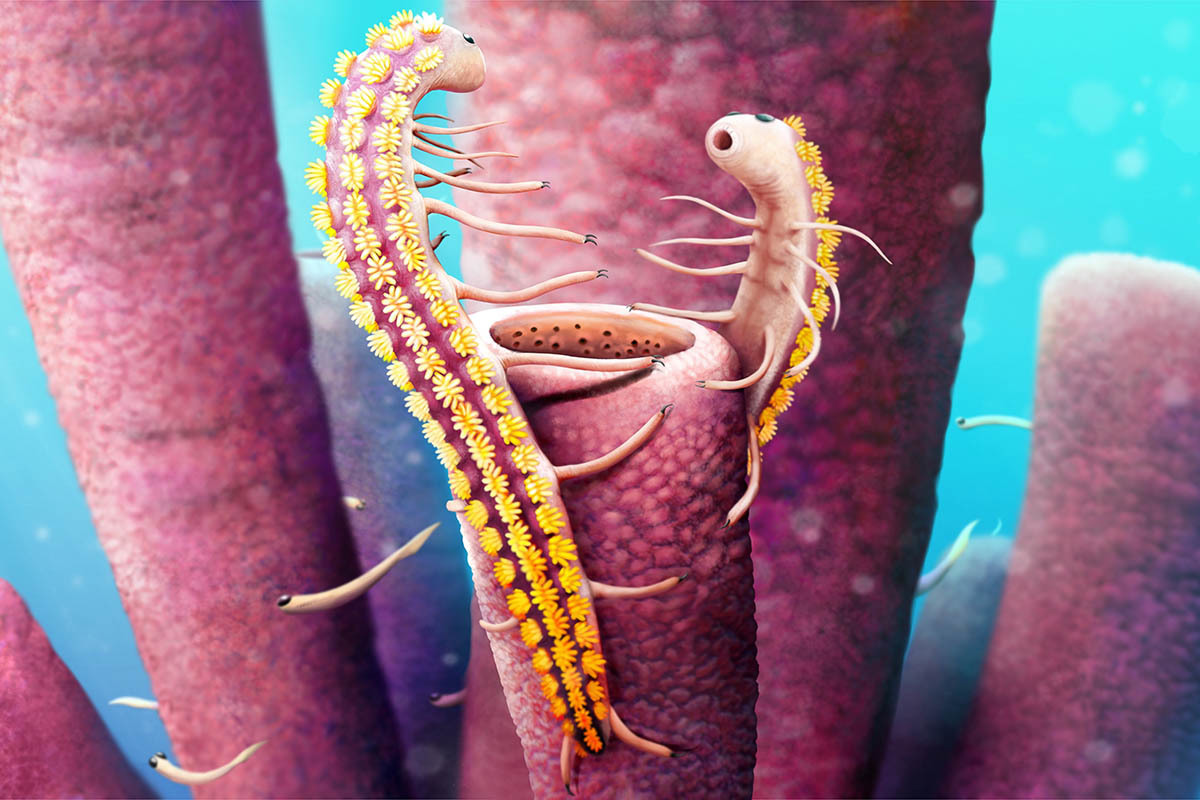 An artist's reconstruction of Thanahita

Incredibly, Siverter and colleagues found that Thanahita was most closely related to Hallucigenia, an icon of the Cambrian Explosion that lived about 80 million years earlier. First discovered in British Columbia’s Burgess Shale, Hallucigenia was a great mystery for many years. It was first thought to eat with seven tentacle-like mouths on its back and walked on stilt legs. Newer discoveries showed that the earlier interpretation was upside down, the tentacle-like mouths were actually paired legs, the stilts were spines on the animal’s back, and its mouth turned out to be in the usual place.

The animals found in the Burgess Shale and other Cambrian sites around the world show the sudden appearance of complex animals in a short period time known as the Cambrian Explosion. The dizzying array of body-plans in these early animals is unique in Earth history. Many of them were thought to be so weird that their evolutionary relationships might never be known. More recent research has shown that although many of these animals were weird, they all had clear evolutionary histories.

Thanahita and Hallucigenia both share tube-shaped bodies with spaghetti noodle legs and ornamentation on their backs. Most species of Hallucigenia have paired spines emerging from their backs, but in one species, H. hongmeia, the spines may have been fuzzy in life. Hallucigenia fossils are usually found on or near sponges, and are thought to have been predators of sponges.

Hallucigenia and kin are considered lobopodians, worm-like animals with limbs common in Cambrian rocks. Hallucigeniids have no living descendants, but are early members of a lineage called the panarthropods that includes the vast majority of living animals. Living panarthropods include the onychophorans or velvet worms, the tardigrades or water bears, and the arthropods including insects, crustaceans, spiders, and many others. Lobopodians don’t form a single lineage and are thought to be early members of different living groups of panarthropods, or ancestral to the whole lineage. Thanahita is the last known hallucigeniid and one of the latest living lobopodians known.

The Herefordshire Lagerstätte has been known for over 20 years and hundreds of specimens different panarthropod specimens have been found. Thanahita is the first known hallucigeniid and late-living lobopodian from the site. Further exploration of the location will certainly add to what we know about invertebrate evolution after the Cambrian Explosion.