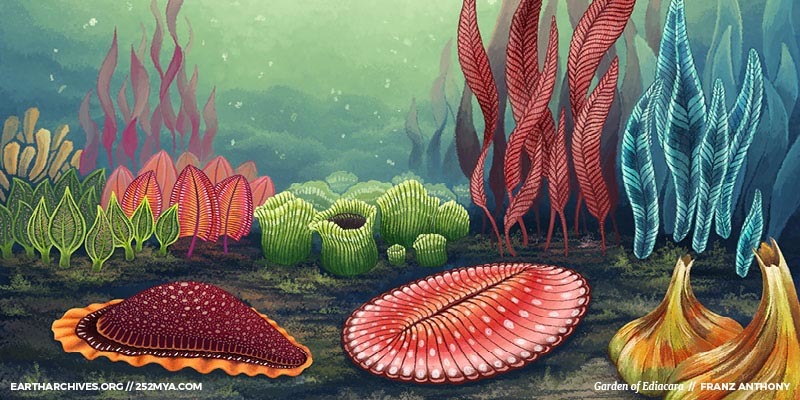 The secret Garden of Ediacara and the origin of complex life

All Posts
For ages, life on Earth and its origin has been a big fascination for mankind. The ancestry of most animals can be traced back to 541 million years ago – when an event called the Cambrian Explosion abruptly birthed a myriad of familiar creatures in the sea. It was a time when the ancestors of crabs, clams, and jellyfishes dominated the oceans. Little did people know, there was a time before the Cambrian where life looked like nothing that exists today.

In 1946, the Australian government sent a geologist to inspect the abandoned mines in the Ediacara Hills. This man, Reg Sprigg, discovered a hillside covered in pieces of weathered sandstones that to him looked very old. These pieces were very flat, as if they were fragments of an ancient seafloor surface.

He then remembered the fossils he saw near Adelaide, beautifully preserved on similar pieces of sandstones. Even though paleontologists said that flipping sandstone rocks is unlikely to reveal any fossil, he wanted to investigate the pieces in Ediacara anyway. Sure enough, he then discovered a circular pattern on one of the rocks that he suspected were the remains of a jellyfish-like creature. In a paper he published in a scientific journal, he gave this palm-sized fossil the name Ediacaria.

To his disappointment, the world responded with a disheartening silence. No one had ever discovered any traces of life beyond minute organisms from rocks as old as the ones in the Ediacara Hills. Sprigg's fossil, the world proclaimed, was merely residues of inorganic reactions instead of the body of a living creature. For decades, Sprigg and his “jellyfish” were largely ignored by scientists. 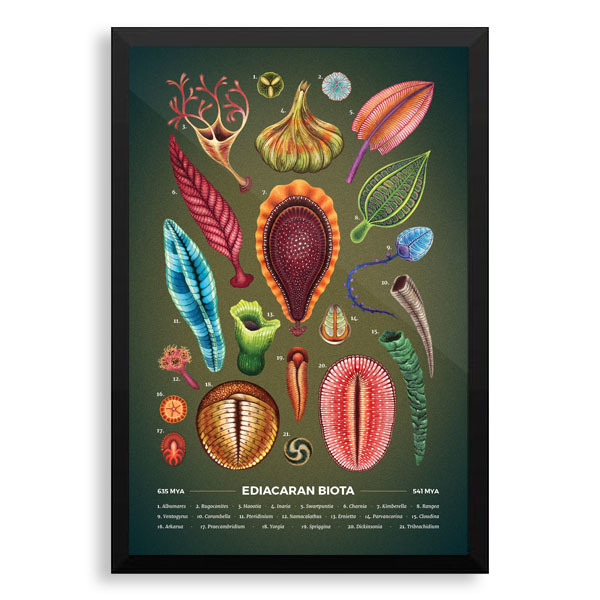 Get these images as prints and other merchandises now from 252MYA.com 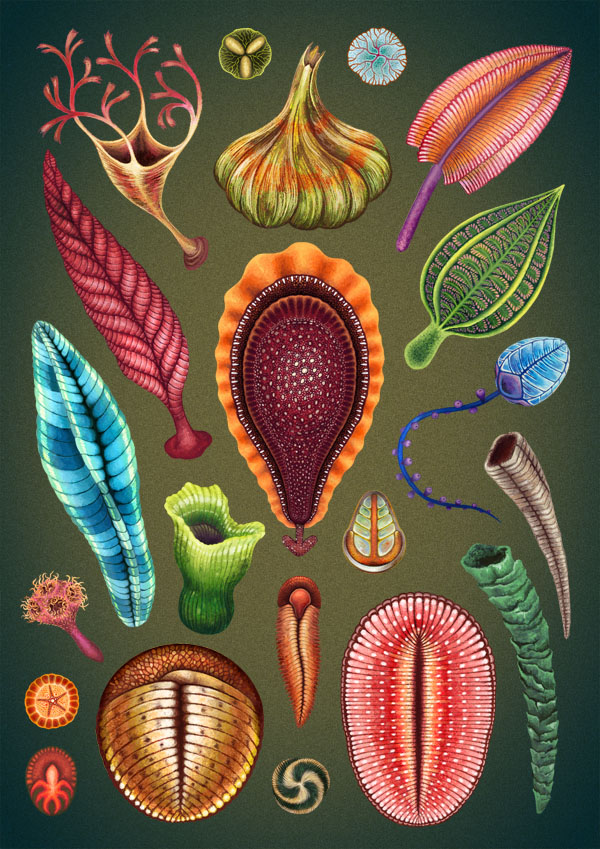 Eleven years later, in England’s Charnwood Forest, three secondary school students were rock-climbing when they spotted a frond-shaped impression in one of the rocks. Unlike in the Ediacara Hills, the geology of the United Kingdom was well-studied. It was known to everyone that the rocks in the forest were too old to contain fossils, let alone of plants.

This was a fact known to Roger Mason, a member of the trio. He made a rubbing of this peculiar fossil and showed it to a local geologist who then published this finding, which immediately sparked curiosity.

It took another two years until paleontologist Martin Glaessner, in 1959, finally realized its connection with Sprigg’s “jellyfish”. He also brought to light two other frond-like fossils unearthed in the late 1920s in Namibia that resembled the one found in Charnwood.

At that time, it was known that life after the Cambrian explosion only makes up 10% of Earth’s long history. However, nobody had ever found any evidence of macroscopic organisms from this long period — that is before the Charnwood "frond" turned the tables. Complex life before the Cambrian, Glaessner declared, did exist.

As a nod to the Australian hills where Reg Sprigg first discovered his “jellyfish," this period was formally given a name: the Ediacaran Period. 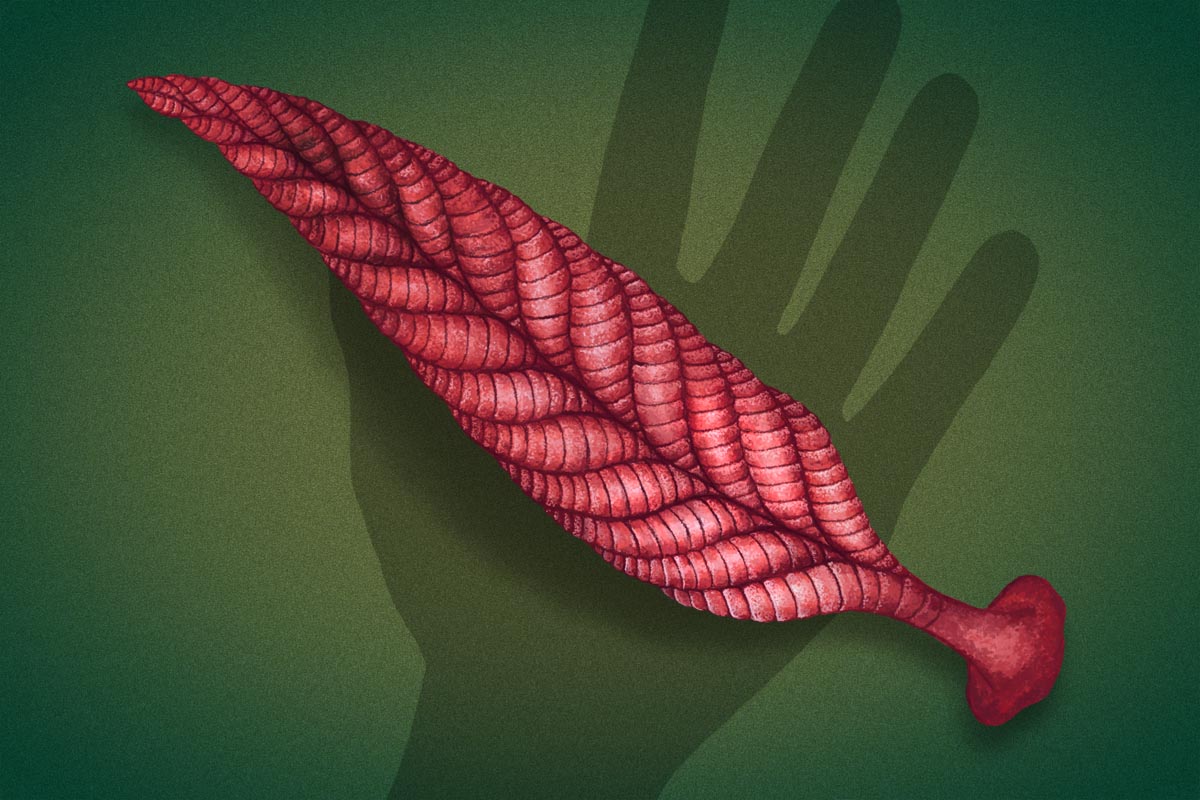 Charnia was the name given to the frond fossil by Trevor Ford, the geologist who published Roger Mason’s finding. Ford originally thought it was an alga, although Glaessner quickly noted that it was a multicellular animal, the first of its kind to be identified. Charnia was thought to have lived in deep-sea environments, dark enough to prevent photosynthesis.

In his analysis, Glaessner compared Charnia to a similar animal that exists today, the feather-like soft coral known as a sea pen. The sea pens, together with jellyfishes and sea anemones, make up the group Cnidaria. It is suspected to be among the most primitive groups of all animals and that rock formations from the Precambrian would have naturally yielded such primordial sea-dwelling creatures.

Later findings revealed that true sea pens only appeared much later in the history of the planet, making them unlikely relatives. The way they grow up doesn’t seem to match up either. In essence, their similarities are nothing more than a coincidence — also known as convergent evolution.

Due to the grainy nature of the fossils, little is known about its life. Several fossils ended with a knob-like base that likely anchored their bodies to the seafloor, but they don’t seem to have any mouth or gut for feeding.

Some scientists argued that Charnia and its relatives absorbed nutrients directly from the water, but at this point nobody can tell for sure. All we know is that this peculiar lifestyle seems to be a common strategy adopted by various organisms living in that period. 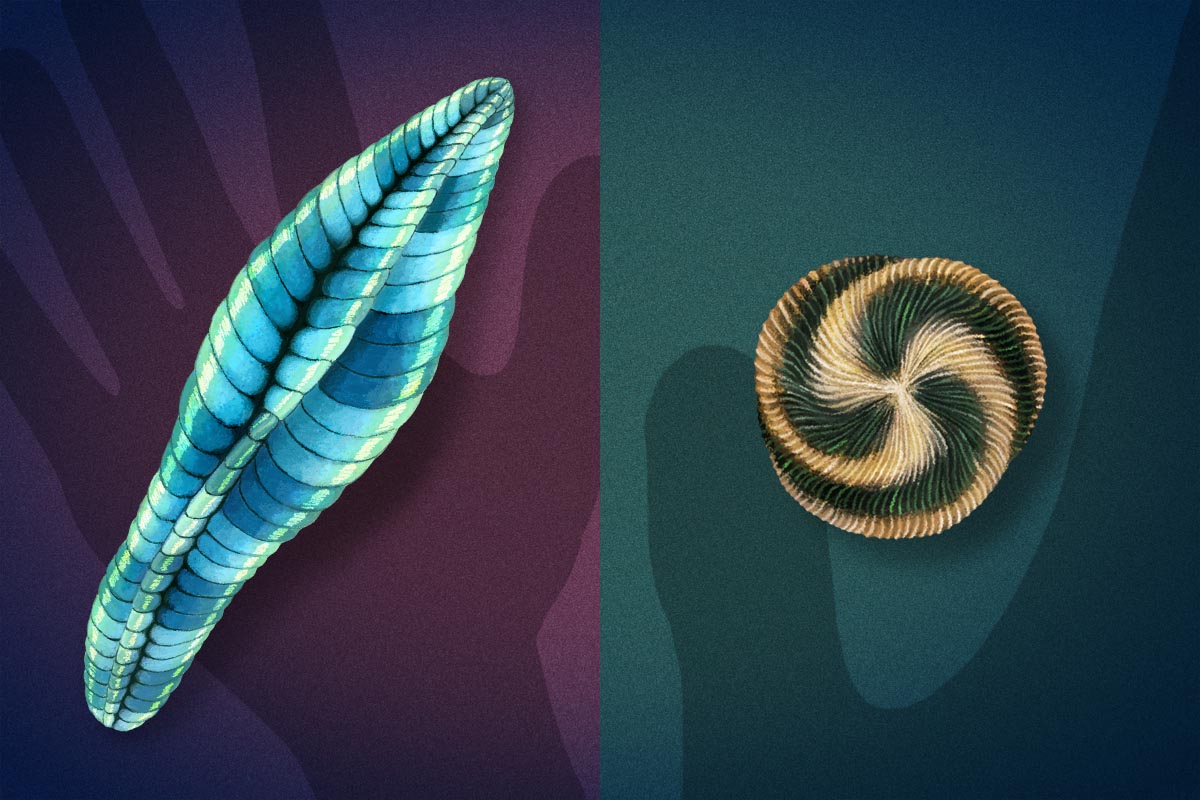 Another notable fossil that shares this lifestyle is Pteridinium. Almost like Charnia, this animal was superficially feather-like with an anchor tethering it to the seafloor. What sets it apart from Charnia is how the lobes across its body are positioned. Unlike most animals today whose bodies can be divided into roughly symmetrical left side and right sides, Pteridinium sprouted its “leaflets” in three different directions.

As quirky as it seems, the three-fold symmetry is not unique to Pteridinium and its close relatives. One group of small, rounded animals that resemble sea urchins called Trilobozoa somehow developed the same symmetry. One member of this group called Tribrachidium put a literal twist to this body plan, growing three arm-like structures spiraling out from the center of its body.

While it may seem like a trivial feature, this atypical growth pattern suggests that these animal are a curious relic from the past. Pteridinium, Tribrachidium, and their long dead cousins left us very little clue to understand how they lived and who their living relatives are. 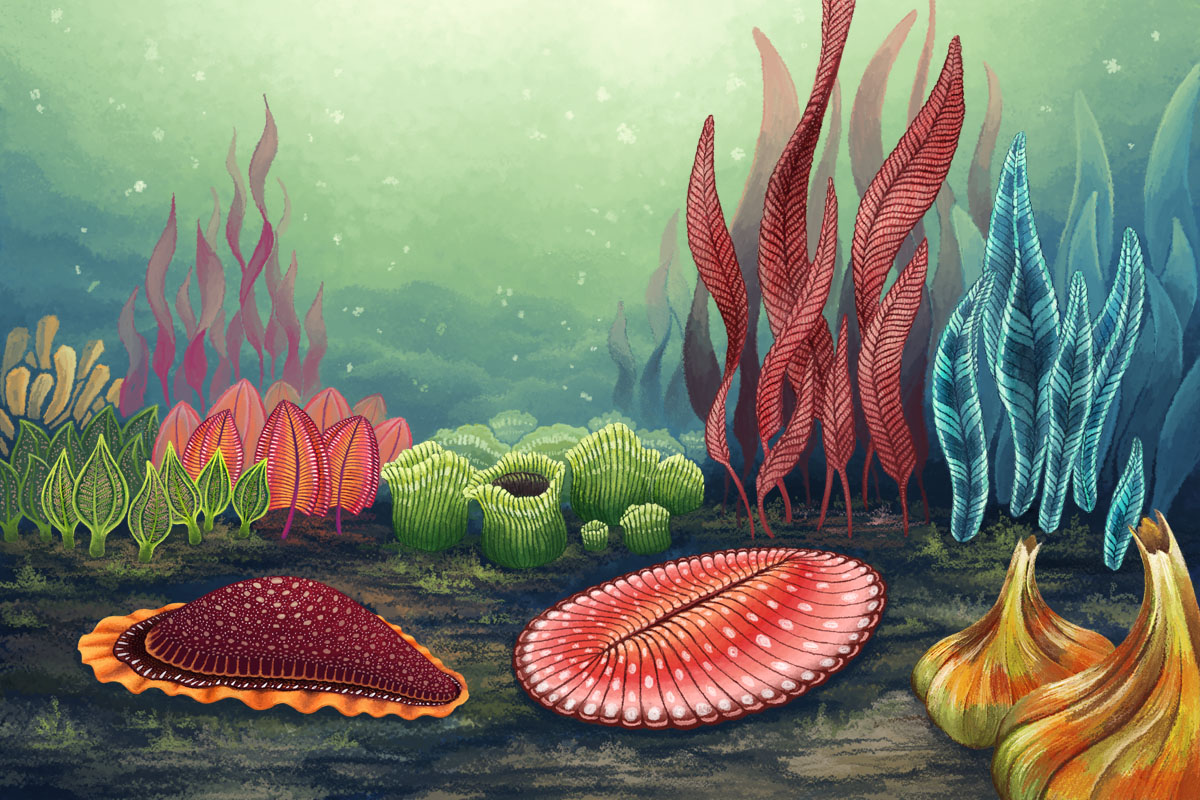 Putting physical peculiarities aside, these organisms were an anomaly in another way. Throughout the history of the Earth from Cambrian to the present day, soft-bodied creatures are notorious for dying without a trace. The lack of tough structures leave them exposed to waves, winds, and scavengers, causing many of them to completely dissolve after death.

In later geological periods, such fossil preservation would have only happened in specific places within specific timeframes when the conditions were exceptional. However, these enigmatic Ediacaran creatures seemed to live in a strange time where the elements cooperated to leave their marks in the sediments all over the planet.

Its secret, as it seems, lies on the surface these creatures lied on. The absence of fast-moving animals allowed microbes to colonize the surface of the ocean floor, then create a layer of secretion wherever they grow. Such a sticky layer allowed the sediment to stabilize and acted as a mold when the animals died on top of them. This age was the Time of the Slime, where the ocean floor was filled with sticky substances.

Such a slow-paced life, combined with the lack of predators, is a feature unique to this period. As a nod to the biblical Garden of Eden, some people have referred to this peaceful early Earth as the Garden of Ediacara. 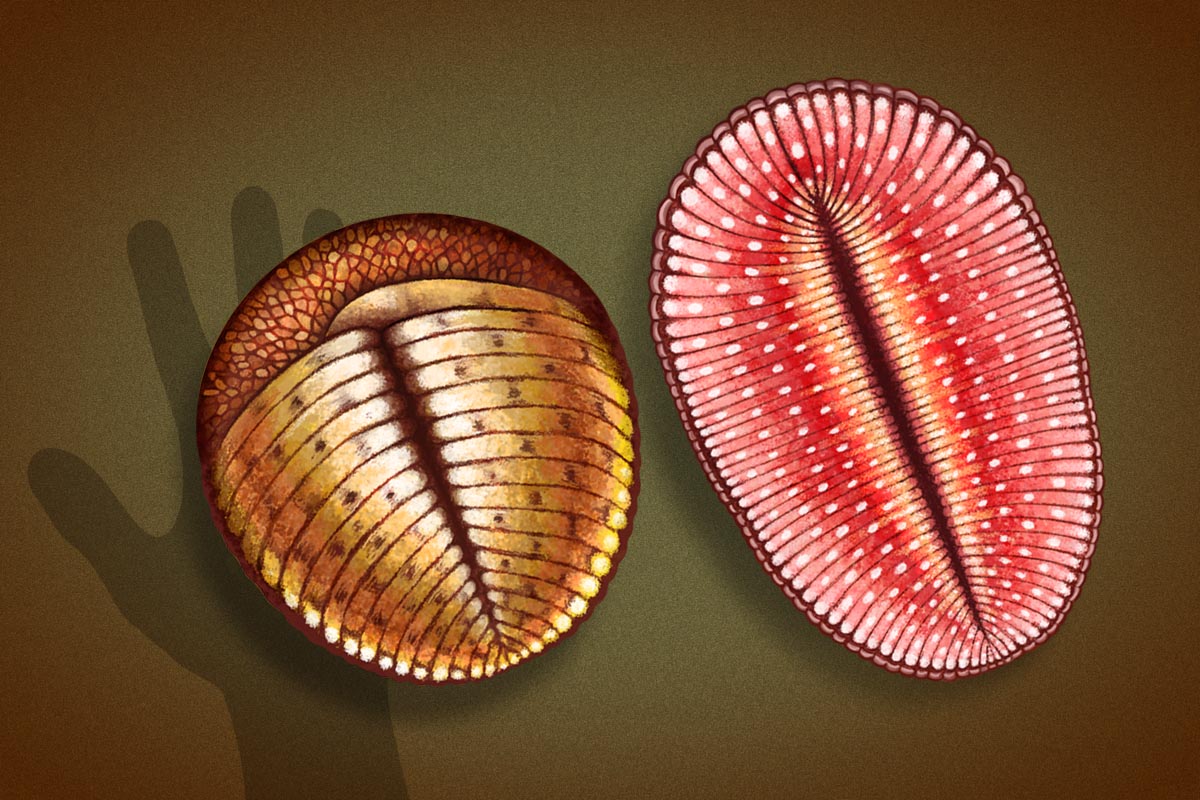 Near the end of the Ediacaran, life started to ramp up its pace. In Russia, a slab of microbial mat was found covered in patches, grazed on by a creature capable of movement. The culprit was a disc-shaped animal named Yorgia.

Growing up to 25cm (10in) wide, this creature was no bigger than a dinner plate. It sported rib-like structures that radiated from a central line with a head-like structure at the front. The exact feeding method is yet to be known, but some specimens of Yorgia’s likely relative called Dickinsonia have been found with internal structures that resembled a digestive system.

In the same locality, a different animal was found with evidences of grazing activities. Kimberella resembled a slug and has often been found near marks that resemble the feeding traces of more modern slugs and snails.

Despite its seemingly simple body plan, Kimberella differed enough from the rest of the organisms living alongside it. This indicates that around 555 million years ago, 14 million years before the beginning of the Cambrian, life had started to evolve into various shapes and lifestyles. 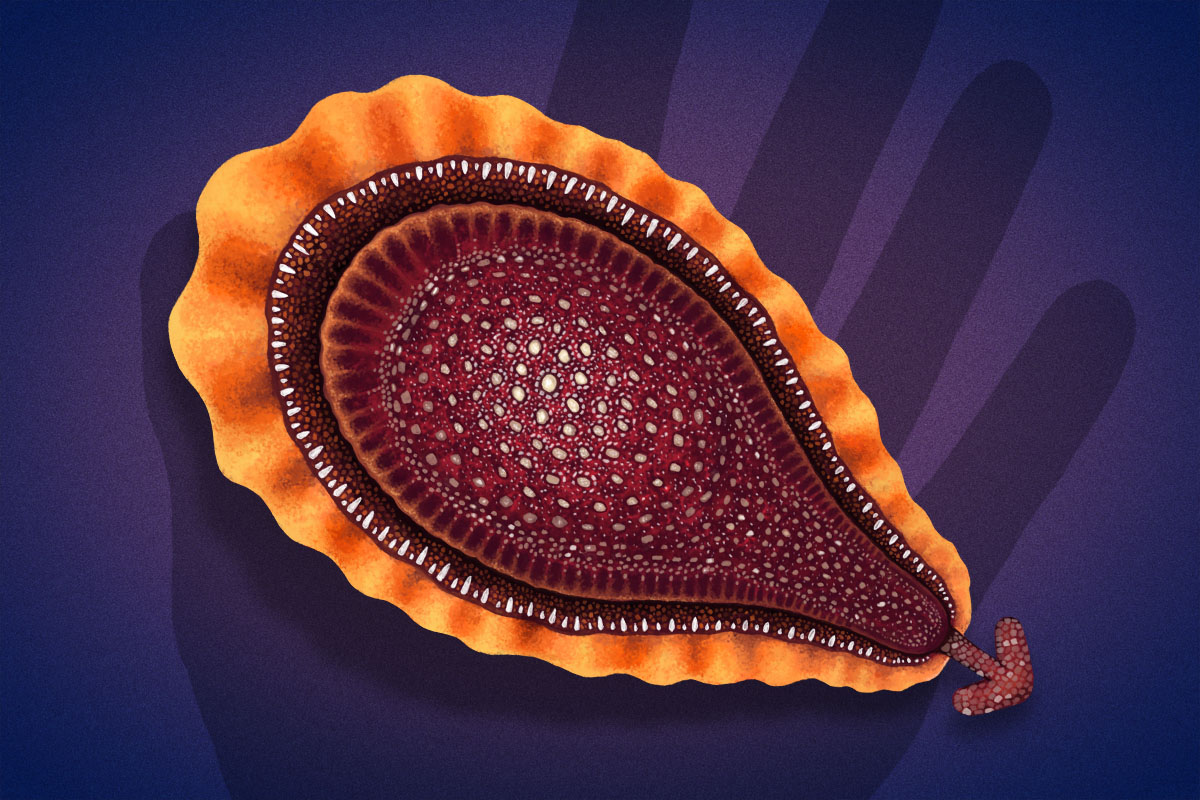 Ironically, it was also evolution that put an end to this peaceful period. The appearance of faster moving creatures around 541 million years ago stirred the environment and the Ediacaran creatures couldn’t keep up with the pace.

The development of movement allowed predators to flourish by feeding on larger, more nutritious organisms. Some creatures burrowed deep to the ground, while others evolved shells to save their lives. This was the dawn of the Cambrian Explosion, where the earliest known relatives of today’s animals took shape.

Within the next few million years, the Garden of Ediacara disappeared, replaced by the resourceful crawlers of the Cambrian. This marks the first mass extinction on Earth, one that is caused by living creatures instead of natural disasters.

At this point, the relationship between the Ediacaran and Cambrian creatures is yet to be resolved. It is possible that the iconic animals of the Ediacara were wiped out completely without any living descendants. One thing we know for sure is that life forms possess the power to alter their planet for their own benefit—at the expense of others.

If this scenario sounds familiar, maybe reflecting upon our past can help us plan a better future.