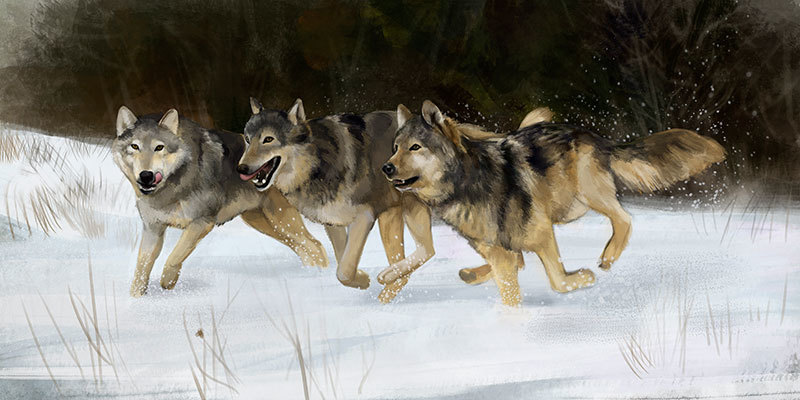 Winter is coming: A time when wolf packs battle for the Yellowstone throne

about 5 years ago by Kira Cassidy

All Posts
Territorial species, like gray wolves living in Yellowstone National Park, will often fight if they encounter a neighboring group. Observational research over the course of 20 years has allowed scientists in Yellowstone to examine the roles of each individual in a wolf pack during these fights over territory and resources. They have discovered that old wolves are the most important in pack versus pack fights as the experience and leadership provided by an old wolf often allows a pack to win even if they are outnumbered.

“All the wolves trotted to the stranger and practically surrounded it, and for a few moments I thought that they would be friendly toward it for there was just the suggestion of tail wagging by some of them. But something tipped the scales the other way for the wolves began to bite at the stranger. It rolled over on its back, begging quarter. The attack continued, however, so it scrambled to its feet and with difficulty emerged from the snapping wolves. Twice it was knocked over as it ran down the slope with five wolves in hot pursuit. They chased after it about 200 yards to the river bar, and the mantled male crossed the bar after it. The two ran out of my sight under the ridge from which I was watching.”

It was 1940 and Adolph Murie was hired to record data on wolves and Dall sheep in Denali National Park (then called Mount McKinley). Murie followed one pack closely for several years, watching them raise pups, hunt prey, and even chase and attack intruding wolves. His field notes may have been the first time in history these territorial, aggressive accounts were written down. I like to imagine this consummate observer and naturalist would be happy to hear the work he began nearly 80 years ago has continued with the return of the wolf to Yellowstone National Park.

Since the reintroduction of gray wolves to Yellowstone 20 years ago scientists have been gathering data on survival and reproduction, mortality and hunting. But one thing biologists didn’t really expect when wolves were brought back to Yellowstone following a 70-year absence was their consistent visibility. Wide open valleys with abundant elk and plowed roads, combined with a decent scope or pair of binoculars, now provides visitors and scientists views of wolf behavior rarely seen elsewhere. 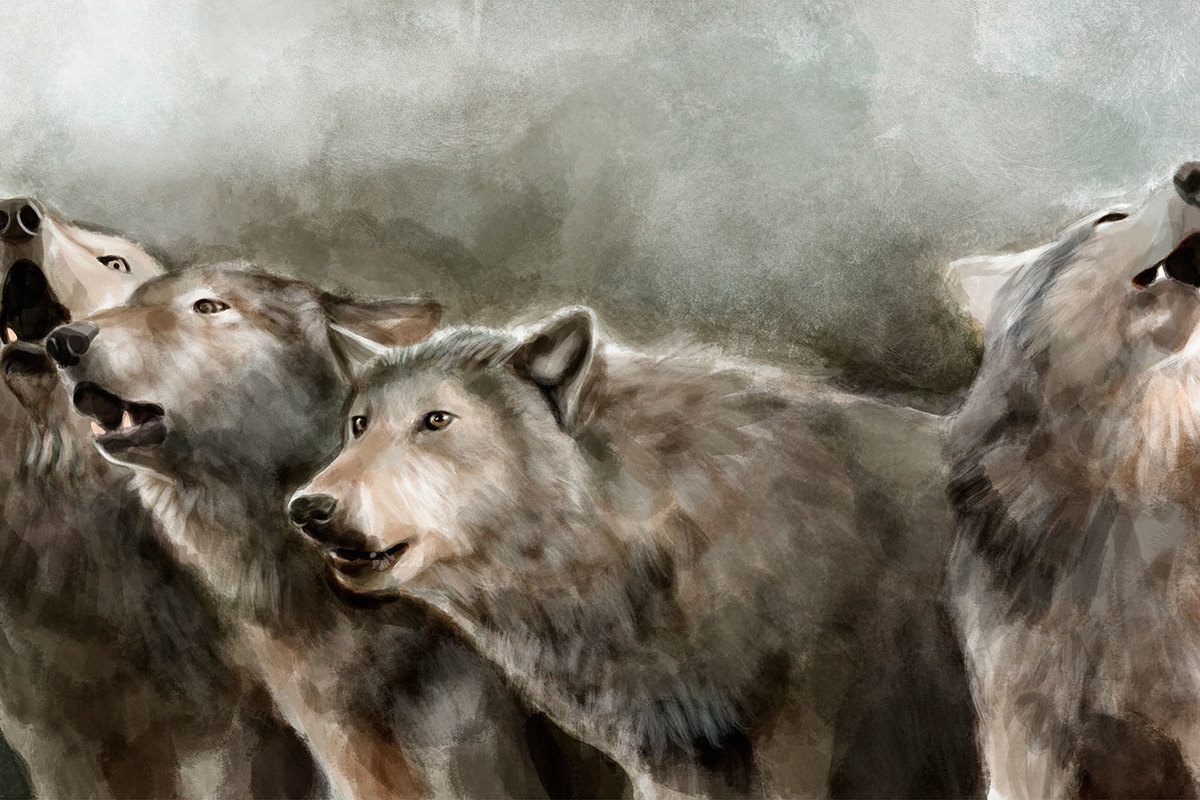 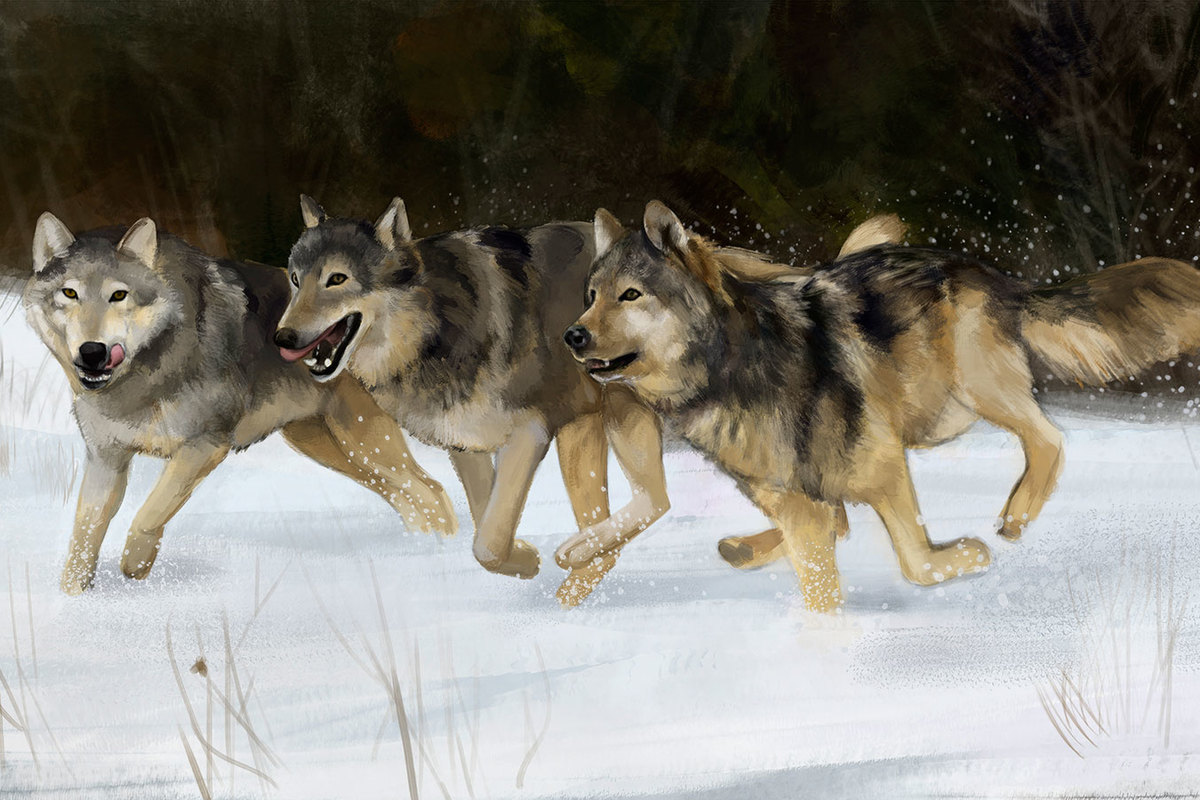 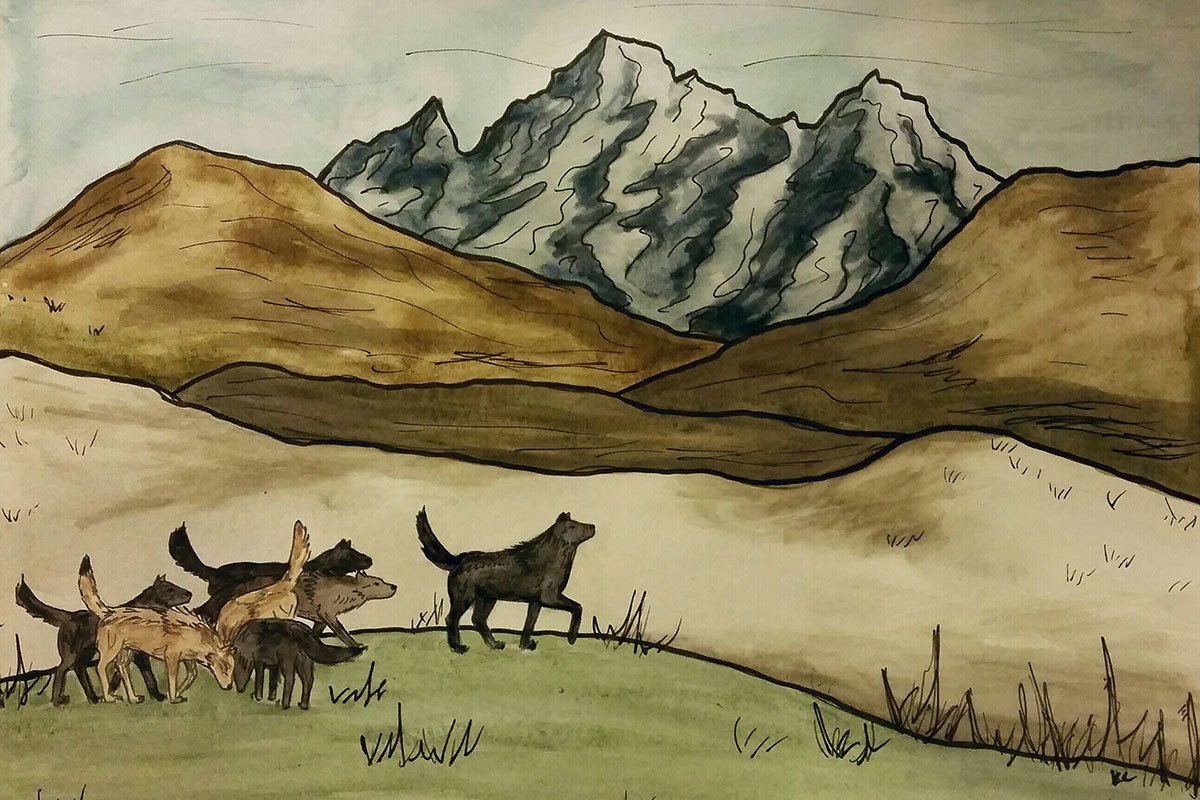 
Biologists have long known wolves are territorial and have noted the difference between the amiable way wolves treat pack mates, usually their close family members, and the aggression they show neighboring, rival packs. When a wolf was found dead researchers pieced together clues from tracks, often concluding that a pack-vs-pack fight had occurred. In Yellowstone those interactions have been observed and recorded for two decades and play a decidedly influential role in the lives of gray wolves, accounting for two-thirds of natural mortality.

Besides the effects these territorial fights have on individual survival, they likely have long-term effects on reproduction, pack persistence, and the redistribution of resources based on which packs are able to consistently defeat their opponents. But what allows one pack to win over a rival? Is it just a numbers game with larger packs always winning out over smaller ones? Do resident packs enjoy a home field advantage? Or is there some compositional factor? Are packs with more of a certain type of wolf, say a large male wolf in his prime, more likely to win? Observational research, like Murie’s, was the only way to find out.

It was 10 a.m. but the mid-morning sun was just barely cresting the eastern ridge. I’d been alternately huddling for warmth in my layers of down and stomping around the small dirt trailhead trying to keep feeling in my toes for over two hours. Watching as the western slopes lit and warmed, I beheld nature’s visual timepiece, anticipating the blanket of sunlight edging temperatures into positive degrees.

I was tracking the Slough Creek wolf pack by listening for pings on the radio receiver, indicating one of the collared wolves was nearby. Finally I saw them travelling up out of the Yellowstone River corridor, their thick winter coats shedding river ice, keeping them a lot warmer than me and definitely not worrying themselves over the speed of the sunrise that morning.

The seven figures followed in each other’s footsteps, noses to the ground. They gathered around one area, and judging by their quickly rising tails and hackles, it was the fresh scent of rival wolves. The alpha male took off running to the north, the five pack females and a yearling male following quickly. Intrigued by the wolves’ behavior, I tuned the receiver to test the signals for other packs. Sure enough, loud beeps from a Druid Peak pack wolf rang out—they must be close by, too. I looked back in the scope and watched the Slough Creek pack running hard now, the dark black alpha male in the lead. Scanning ahead of them about 400 meters I saw five members of the Druid Peak pack. They glanced at each other and began their own charge, tails like flags, straight at their opponents.

The distance closed rapidly and all of a sudden it was chaos. The Slough alpha male slammed his body into a Druid wolf but when another grabbed his neck and shook violently he broke loose and ran out of the fray. The Slough females followed the male’s wake but finding themselves in the midsts of four huge male Druid wolves, tucked tails and ran. Two of the Sloughs turned around and hopped briefly onto their hind legs, trying to figure out who was a pack mate and who was not. The Druid wolves stayed in a solitary unit, chasing and spreading out the Slough wolves for several minutes, keeping them from joining together. As the commotion died down, the Slough wolves started to bark-howl from all angles. They were lost and separated, not sure where to go for fear of running into the Druids again. Eventually the tension dissipated and the Druids relaxed. The Sloughs wandered in several small groups, separated by miles of mountainside.

Even though the Sloughs outnumbered the Druids, they had lost; completely displaced from the fight location—firmly in Slough Creek pack territory. And as it turned out, this encounter would be the prime example of what characteristics are important to a pack during successful inter-pack interactions.

The first important factor, the only one in the Slough’s favor, was pack size. Having one more wolf than an opponent increases a pack’s odds of winning by 140%. Numerical assessment studies have found this same pattern in many social species from chimpanzees to African lions to mongooses. But for wolves, pack composition is also important. A pack with one more adult male enjoys a 65% increase in win odds. Adult male wolves are 20% larger and more muscular than females; they are built for fighting and protecting territory and resources. The Druids had the advantage here with two adult males more than the Sloughs (4 to 2). A home-field advantage doesn’t exist for wolves. Even intruders can compete with residents if they have the numbers or those valuable individuals present.

But the most influential factor was the presence of old wolves (>6 years old). A pack with one old wolf more than an opponent had 150% greater odds of winning—making it more important than pack size. As the Druids exemplified (they had one more old adult than the Sloughs), they won despite being outnumbered. Old adults are nowhere near the fastest or the strongest but what they do have is experience. They’ve encountered competitors many times. They’ve seen pack mates killed, and likely participated in killing a rival themselves. They may avoid a conflict they figure they can’t win—upping their success percentage. Leadership and experience make old wolves the most valuable individuals in the pack during aggressive encounters.

These pack vs pack battles have gone on for thousands of years, contributing to the evolution of territoriality, aggression, and sociality in gray wolves. There have surely been occasional human witnesses to these episodes of truly wild nature: Homo sapiens during the Pleistocene, Lewis and Clark on the Corps of Discovery, and, of course, biologist Adolph Murie in 1940s Alaska. And now, in Yellowstone, we can all observe this instinctive yet advanced behavior exhibited by a complex, social species—a  species with intelligence and a division of labor amongst group members, the goal to protect themselves, their resources, and each other.


Related Stories
For gray wolves and hunter-gatherers, family is all that matters
South America’s “fox on stilts”
Mysterious whales seen alive for the first time
Weird mammals get a home in the tree of life
Forty million years of whale history
//sulc.us/a30eq
/articles/winter-is-coming-a-time-when-wolf-packs-battle-for-the-yellowstone-throne/