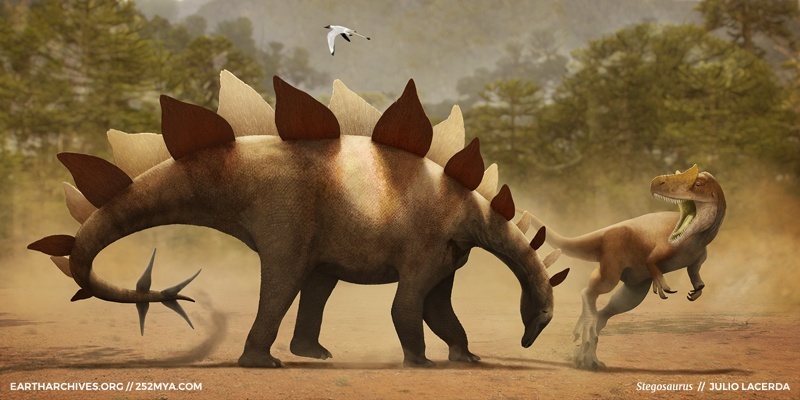 All Posts
Ever since their discovery, the huge back plates and tail spikes on stegosaurs have inspired wonder, but also puzzlement about their purpose.

Stegosaurs are some of the most instantly recognizable dinosaurs to the general public. They are well known for their distinctive anatomy, especially the large flat plates that covered the neck, back, and tail, the four or more large spikes at the end of the tail, and ocassionally, large spikes arising from their shoulders. New discoveries and investigations are bringing us a more detailed picture of the function of the plates and spikes whose purpose has been debated since their discovery.

Stegosaurus and its closest relatives, appropriately known as stegosaurs, were four-legged plant-eating dinosaurs that had distinctive armor made up of upright flattened plates on the neck and back and spikes on the tail. The different stegosaur species have unique sizes, shapes, and arrangement of armor, but were fairly similar to each other in most other aspects.

The first fragmentary stegosaur fossils were found in Europe and Africa in the early 19th Century, but it wasn't until the discovery of Stegosaurus itself in the United States in 1877, that their true nature was revealed. They were instant media sensations, legitimately alien reptiles that roamed primeval forests on this very planet in the incredibly distant past. 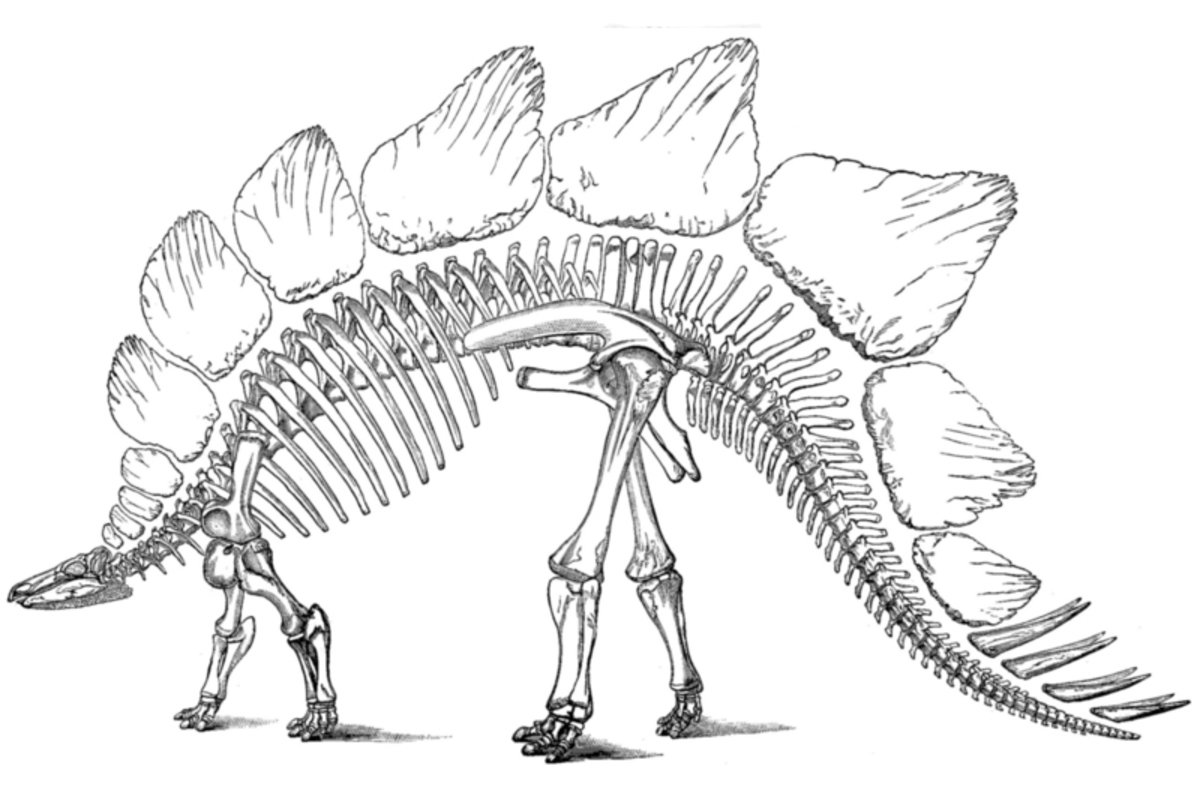 One of the earliest skeletal reconstructions of Stegosaurus published by O. C. Marsh in 1896 shows a single row of plates and a tail with eight spikes, as well as a very short neck.
Othniel Charles Marsh, 1896 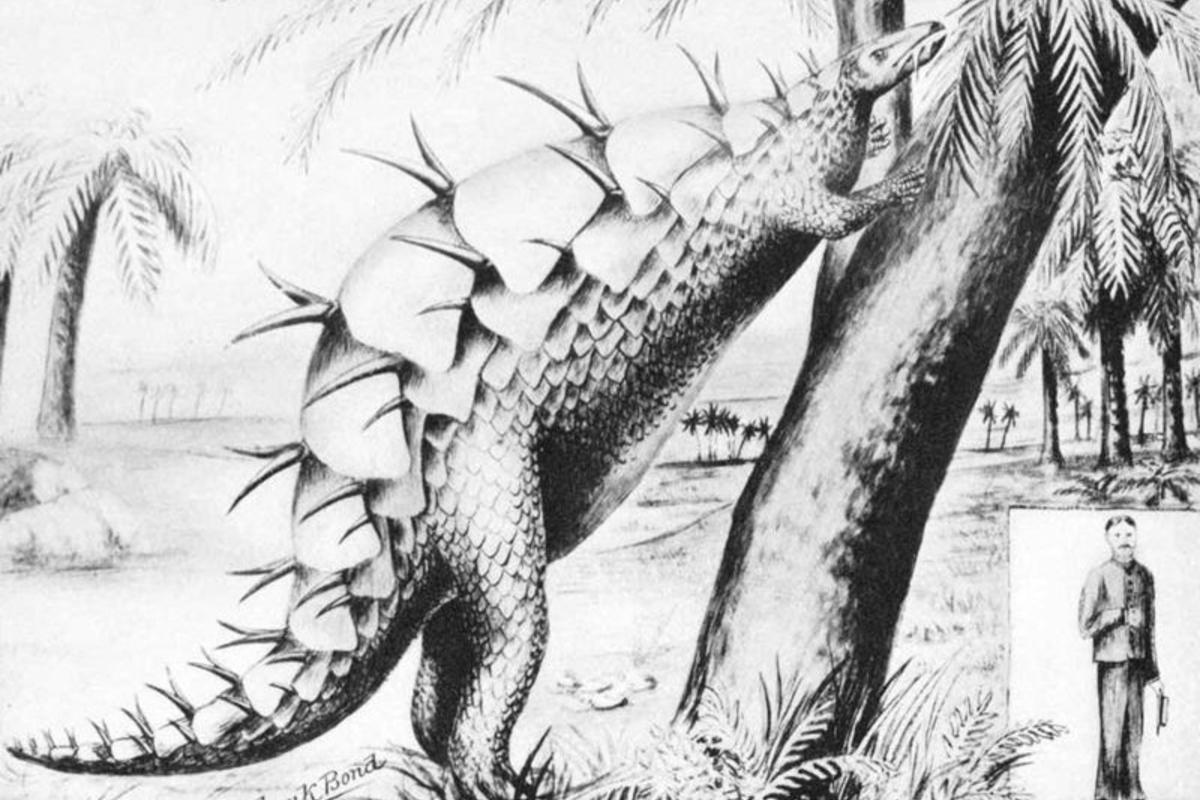 An early alternative arrangement proposed that the plates lay flat against the flanks with the tail spikes protruding from the gaps, like a prickly armadillo.
Frank Bond, 1899 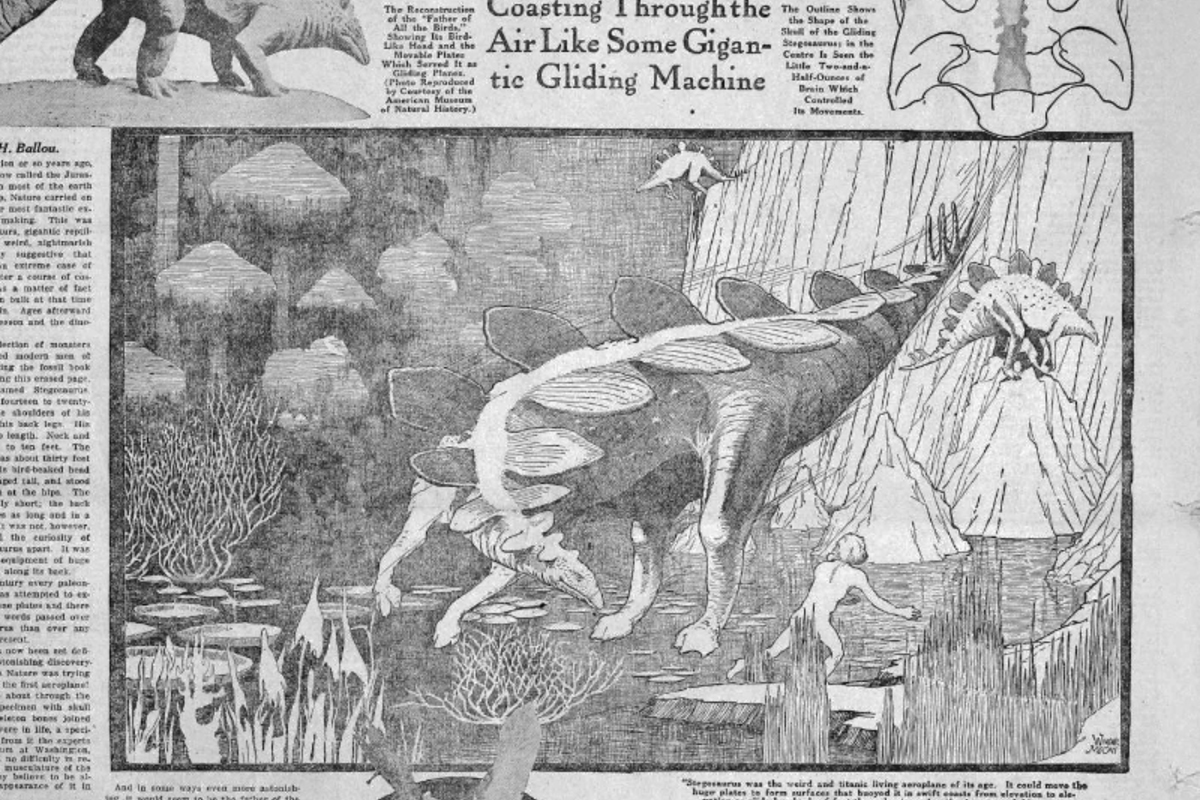 Another early idea proposed that the plates acted as flight surfaces allowing stegosaurs to glide.
The Ogden Standard-Examiner, 1920.

The earliest scientific and artistic reconstructions of Stegosaurus show an animal with truly bizarre proportions. It had very short forelimbs and very long hindlimbs which caused the back to slope steeply to a small head on a stubby neck. The plates were initially placed in a single row down the middle of the back, and some early reconstructions show eight spikes at the end of the tail instead of four.

Other early ideas about stegosaur plate anatomy include the idea that they in fact covered the sides of the animal like a pangolin or armadillo. Another proposal that was published (although probably as a joke) claimed that the plates were oriented horizontally and could have been used as flight surfaces for gliding off cliffs.

More nearly complete remains showed that the plates are actually in two staggered or alternating rows instead of one and that at the end of the tail there were just four spikes. The short forelimbs and long hindlimbs were still reconstructed in a way that created a steeply sloped back and a short, stubby neck.

Examination of the braincase and vertebrae of Stegosaurus revealed further surprises. It was found to have a tiny brain, and an expansion in the hip vertebrae that was commonly, but wrongly, regarded as a second brain. This gave it a reputation of having an IQ so low it needed another brain in its rear-end.

To make matters worse, not only was it nearly brainless, it was thought of as woefully under-armored, the plates offering no protection from predators, and the tail surely too heavy to swing. For much of the 20th Century, Stegosaurus the dullard was a dominant narrative about the animal. Many artistic reconstructions of the time showed carnivorous dinosaurs taking bites of hapless stegosaurs that barely seemed to notice. 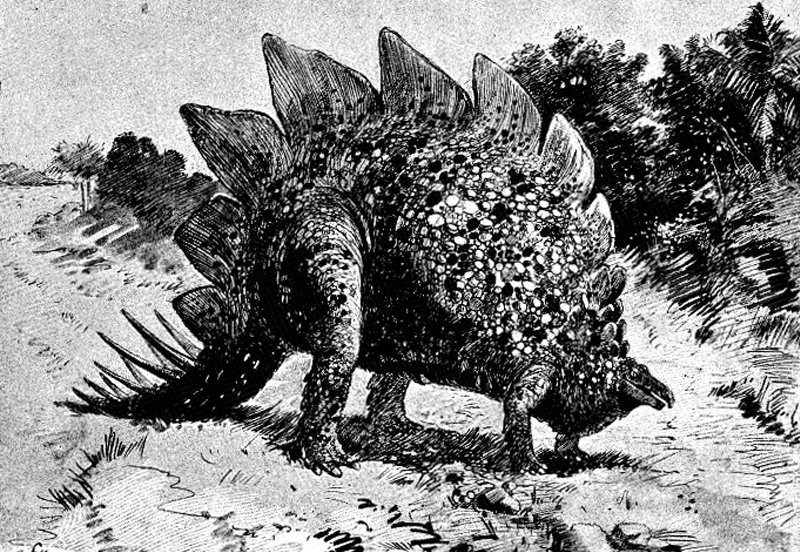 Many reconstructions produced in the late 19th and early 20th Centuries showed Stegosaurus as an awkward, weakly muscled dullards like this 1897 illustration by Charles R. Knight.

Some truly exceptional specimens of Stegosaurus have been discovered in recent decades and show that although the initial anatomical descriptions were broadly correct, they got several things wrong. For instance, many early reconstructions underestimated the size of the forelimbs and placed the shoulders too far forward, incorrectly shortening the neck and forcing the head to be very close to the ground.

In reality, Stegosaurus had very muscular arms and shoulders, and with their shoulders in the right place, their necks were shown to be fairly long and flexible. The tail was also well-muscled and flexible with its spiked tip – nicknamed a "thagomizer" in a 1982 "The Far Side" cartoon – held aloft. This was true of other stegosaurs too. 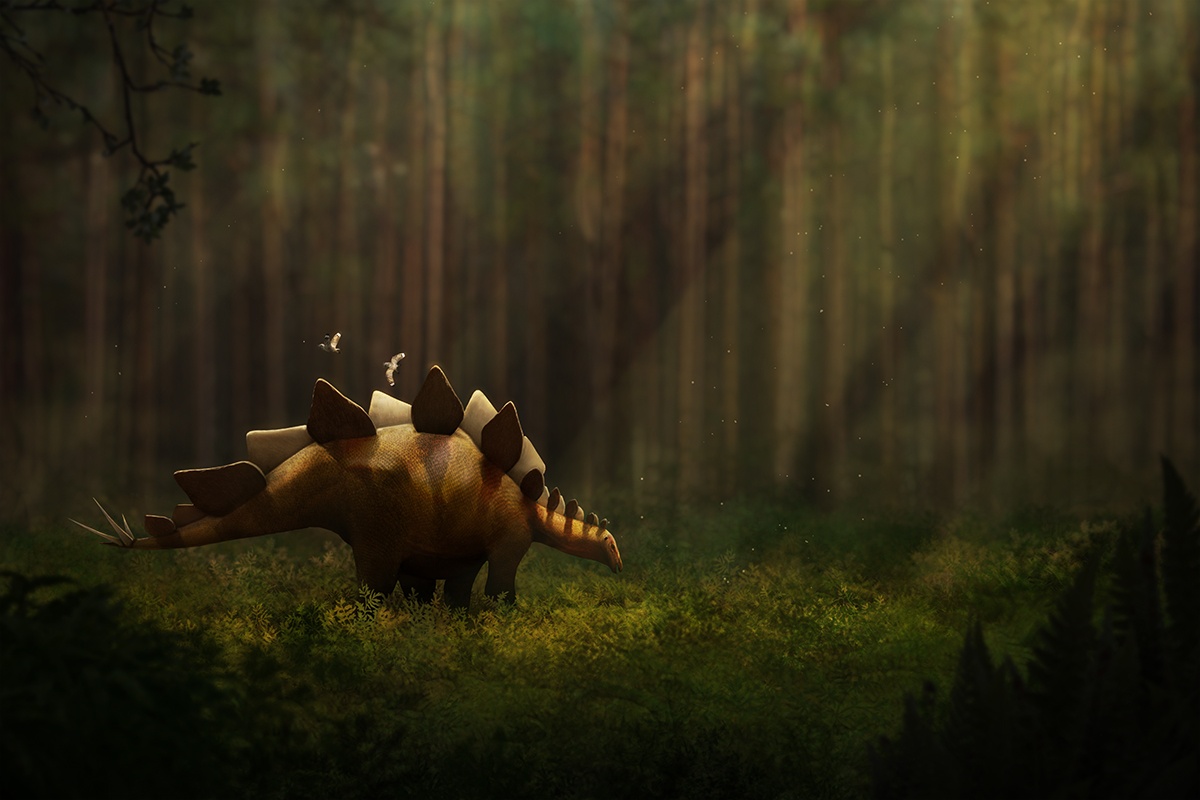 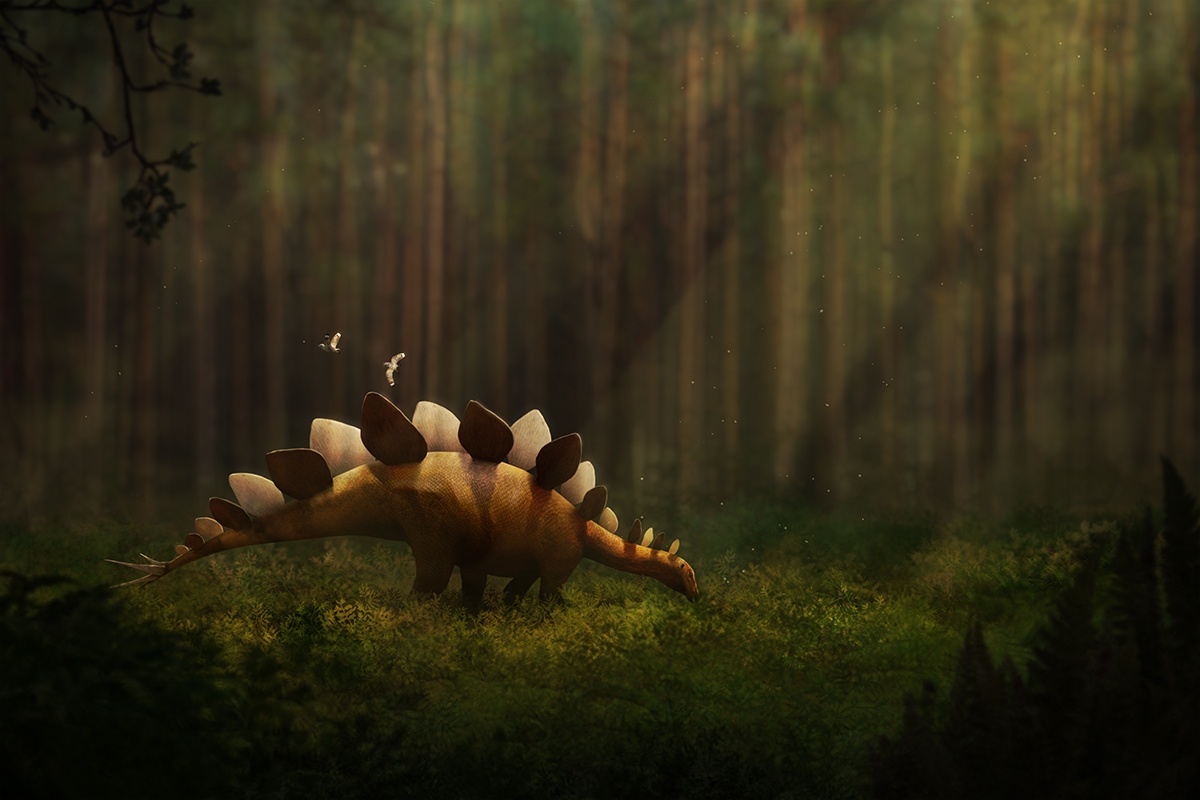 New discoveries and interpretations allow paleoillustrators to create art that is both aesthetically pleasing and as scientifically accurate as possible. Use the slider to see how Earth Archives' resident paleoillustrator Julio Lacerda, has modified his August 2016 illustration of Stegosaurus stenops to better reflect the anatomy revealed by the Natural History Museum – London's “Sophie” specimen of Stegosaurus.”

Additional discoveries of stegosaurs from around the world have informed our ideas of their evolution, and the function of their armor. Stegosaurs have been found in rocks dating from the Middle Jurassic to the Early Cretaceous in North America, Europe, Africa, and Asia. Some spectacular new finds include Huayangosaurus and Gigantspinosaurus from the Middle to Late Jurassic of China, and Miragaia from the Late Jurassic of Portugal. Huayangosaurus is one of the most completely known primitive stegosaurs, Gigantspinosaurus is notable for its enormous shoulder spines, and Miragaia for its extremely long neck.

Secondly, many early stegosaurs had a larger number of tail spikes, and fewer plates. In some species there is a smooth transition between spikes and plates with armor of intermediate shape, which suggests the plates evolved from spikes that flattened over time.

Lastly, most other stegosaurs had plates arranged in pairs along the back rather than alternating from right to left. Paleontologists know that Stegosaurus's plates alternate because well preserved fossils of Stegosaurus show this. Also, all of Stegosaurus's plates are unique and there are no duplicates found. In many other stegosaurs it's common to find duplicated mirror-image plates, indicating that their plates were paired on the left and right sides. 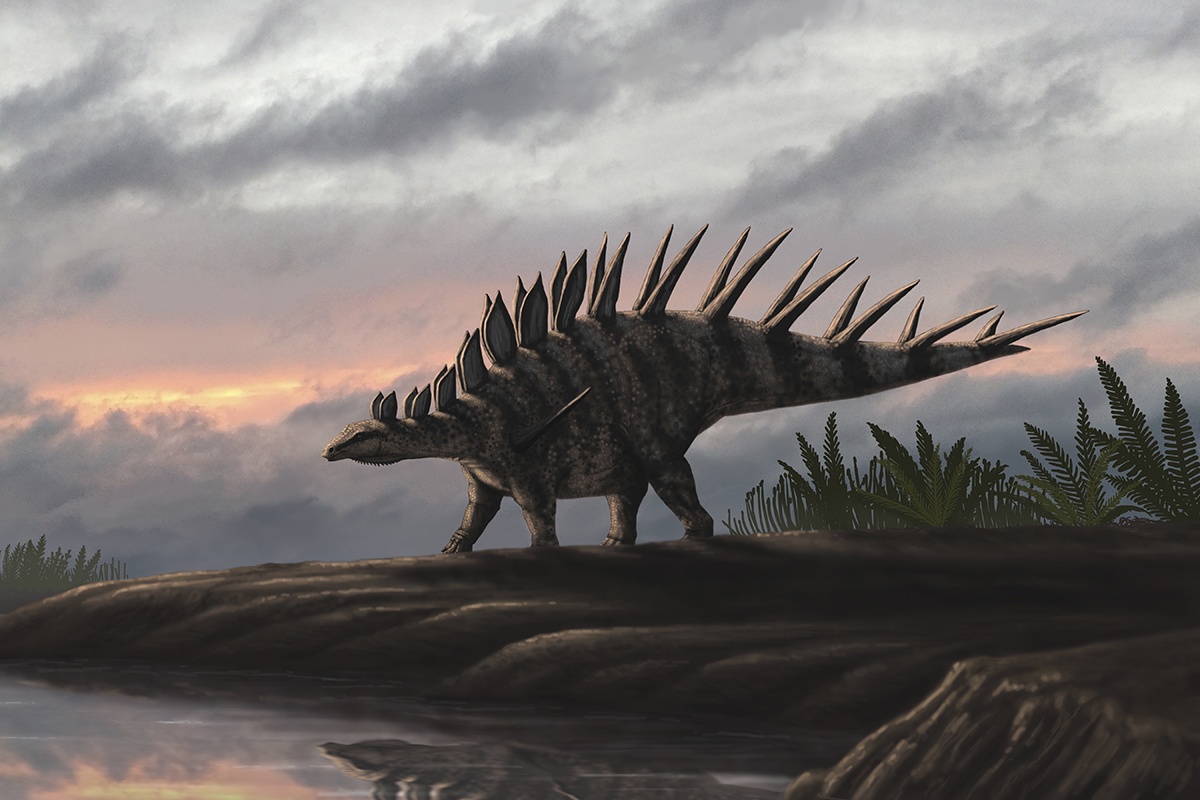 Another popular idea focused on their possible use in warming up or cooling down their bodies. Paleontologists noted that the internal anatomy of the plates was packed with blood vessels. The high surface area and abundant blood supply may have been an effective way to heat up in the sun or cool down a breeze on a hot day. Wind tunnel tests even showed that Stegosaurus's plates could be effective at dissipating heat. Well-preserved tissue on the plates of Hesperosaurus, a close relative of Stegosaurus also from the Late Jurassic of the USA, shows that the plates were covered in keratin. This is the same material that makes up claws, horns, and beaks, and would have limited the ability to transfer heat to the environment.

According to another idea, the plates are display structures meant to attract mates. Many animals evolve strange, showy structures that serve no utility such as protection or feeding, but are used to attract mates. Examples in living animals include antlers in deer and moose, and long tail feathers in peacocks and quetzals. In other words, the main selective pressures driving the evolution of the plates may have been the quest for sexiness.

The spiked thagomizer on the other hand, has usually been regarded as a defensive weapon since their initial discovery. New discoveries and research have focused on the placement and location of the spikes, their use, as well as the flexibility of the tail.

Modeling of the range of motion in the neck and tail of Kentrosaurus, a Late Jurassic stegosaur from Tanzania, showed them to be very flexible. The tail of Kentrosaurus was so flexible its spiked tip could reach the sides of its own body. Not only could the spikes actually reach an attacker, stegosaur tail spikes often have trauma-related injuries showing that the tails were, at the very least, swung with some force. 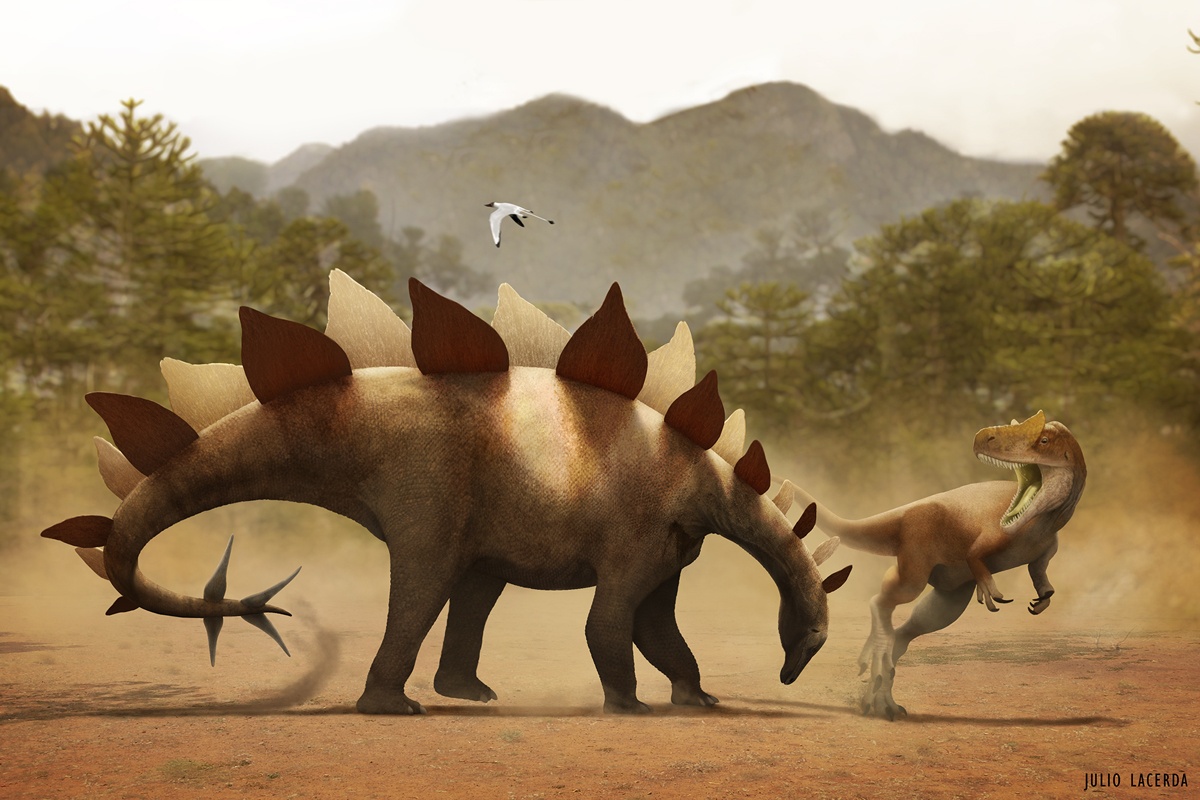 Although carnivorous theropods like this Allosaurus were probably faster sprinters than Stegosaurus, close examination of the anatomy of stegosaurs reveals that they were formidable and dangerous animals. Image Credit, Julio Lacerda.

Taken as a whole, the current understanding of stegosaur evolution and anatomy allows us to imagine the behavior of these ancient herbivores. Their plates were likely used as display structures and may have been brightly colored or boldly patterned.

The flexible spiked tails could be considered a formidable defensive weapon, able to reach the unarmored flanks. That coupled with a flexible neck that allowed the animal to look behind it and aim its tail, and the muscular forelimbs that could quickly re-position the body showed that stegosaurs were no pushovers.

Far from their former stereotype as lazy dullards, stegosaurs were like many large herbivores today, fascinating and dangerous animals.

Czerkas, Stephen A. “A reevaluation of the plate arrangement on Stegosaurus stenops.” In Dinosaurs Past and Present, Vol 2, edited by Sylvia J. Czerkas and Everet C. Olsen, 83-99. Seattle: University of Washington Press, 1987. .