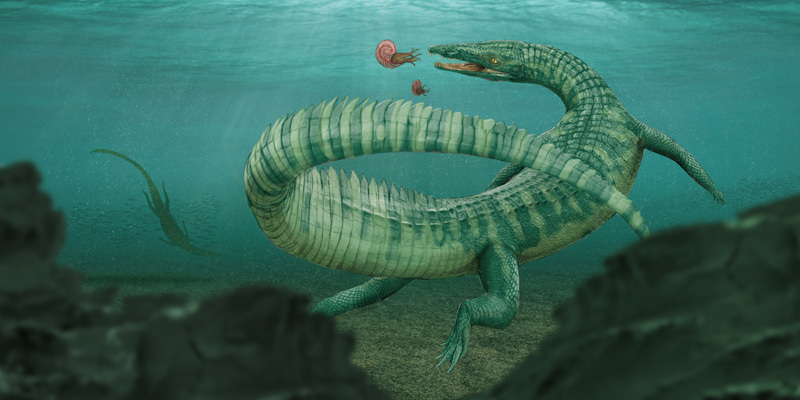 All Posts
The discovery of an armored, aquatic predator increases the known diversity of Triassic reptiles. Comparison to other reptiles, living and extinct, shows that it was an ambush predator and most closely related to an armored predator from New Mexico.

In late 2016, paleontologists Chun Li and collegues investigated an unusual armored aquatic reptile that lived in southern China during the Middle Triassic. The fossil animal, named Litorosuchus somnii, suggests that reptiles were more diverse in the Triassic than previously thought.

Litorosuchus was found in rocks of the Falang Formation in Yunnan Province. The Falang Formation is made up of limestones that were deposited in shallow water platforms in tropical seas, similar to the waters of the Bahamas, about 240 million years ago. The specimen is about two meters (6.5 feet) long, and consists of nearly the whole skeleton from tip of the snout to the end of the tail.

It had webbed feet, a long and tall tail, and upwardly directed nostrils. Those features, as well as the discovery of the specimen in marine sediments have led the authors to propose that Litorosuchus was an amphibious predator. The shape of the tail is reminiscent of what's seen in living “tail driven” predators like alligators and crocodiles that rely on surprise to ambush prey. The name Litorosuchus references the animal's home territory, combining Latin and Ancient Greek roots meaning “coastal crocodile.” 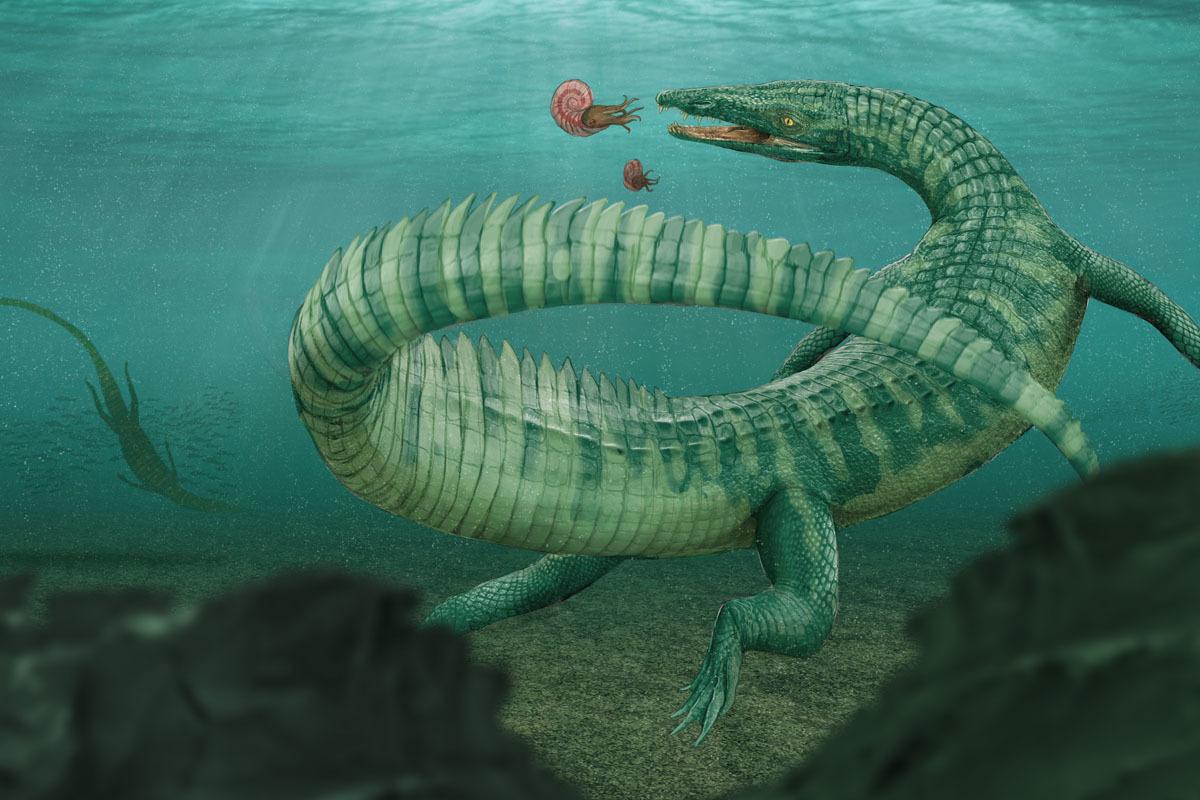 In life, Litorosuchus would have superficially resembled both gharials and monitor lizards. The skull is long, low, and narrow. The teeth in the upper and lower jaws are fairly long and blade-shaped. There are even “fang-like” teeth in the upper and lower jaws, significantly longer than the others. In the upper tooth row, there is a gap called a diastema, separating the teeth at the tip of the jaws from those on the sides of the snout. Additional teeth, known as palatal teeth, are found on the roof of the mouth.

The animal's neck is relatively long, while the tail forms more than half the total body length. Its entire body is covered in osteoderms – bones embedded into the skin acting as armor. They come in several different shapes including rectangles or ovals with raised keels, long spines, tile-like plates, and small pebble-shaped nodules. The size, shape, and distribution of osteoderms preserved in the specimen allows Litorosuchus to be reconstructed with a great degree of accuracy.

The beginning of the Triassic Period was marked by the Permo-Triassic extinction, the largest extinction in Earth's history. In the time following the extinction, different reptile groups spread rapidly to fill adaptive landscape left empty by the extinction. One of the most successful groups in the Triassic were the archosauriforms, which evolved a number of unusual and experimental body plans.

Li and colleagues found Litorosuchus to be an archosauriform. This large group of reptiles includes living birds and crocodiles, as well as several extinct groups. Litorosuchus's closest relative was found to be Vancleavea campi, a Triassic armored aquatic predator from rocks laid down about 5 million years later at the Ghost Ranch locality in New Mexico, USA.

Litorosuchus and Vancleavea share many characteristics, including extensive armoring, but Vancleavea's snout is quite a bit shorter and lacks a number of skull openings housing sinuses that characterize archosauriforms. They are thought to have had similar habits, with Litorosuchus living in warm seas, and Vancleavea patrolling freshwater shorelines.

The Litorosuchus and Vancleavea lineage left no descendants, but filled a niche later occupied by phytosaurs and crocodilians. Although they are archosauriforms, their lineage is not part of the smaller group called archosaurs, which includes crocodilians, pterosaurs, and dinosaurs including birds.

In addition to Litorosuchus, other unusual non-archosaurian archosauriforms named in 2016 include the dome-headed Triopticus, and the leg-wing glider Ozimek. While dinosaurs are members of the archosauriforms, for most of the Triassic they were relatively minor components of the ecosystem.

Read the original research at The Science of Nature - Naturwissenschaften.