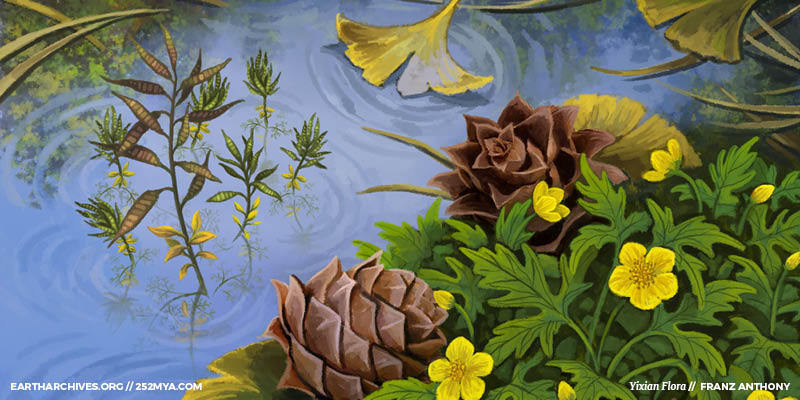 The evolution of plants part 4: A tale of flowers and seeds

All Posts
We live on a green planet. Today we may take them for granted, but plants are the most important living things on Earth. Their colonization of land made it possible for all animal life to survive, from the smallest ants to the biggest dinosaurs. After evolving into green-topped giants, how would plants ensure that their future generations were protected? What new ingenious systems of reproduction would they use?

From the largest trees on Earth to the loveliest blooms, many plants came from a seed. Seeds range from the fluffy drifters like the dandelion seed to heavy Brazil nuts. The evolution of the seed started at a time when spore-bearers were the dominant plant forms on the planet, back in the Carboniferous over 350 million years ago. Some plants evolved a new way to protect their embryo in a special coat,  leading to a evolutionary radiation of plants that would dominate the land forever after.

A seed is essentially a fertilized plant egg, or ovule. It may be located inside the “womb” of a plant, and for the earliest seed plants, this meant cradling it in a hard and scaly cone. The availability of a protective cover allowed for seed dormancy, where the seed lies buried for a prolonged period before its actual germination. If it is unable to germinate in time, then the seed may lie buried in the soil. Prolonged dormancy ensures that the seeds survive long periods of hardship, whether it be issues with the climate, deficiencies in the soil, lack of nutrients or water, or simply to enable competition with neighboring species.

During the reign of the dinosaurs, forests were dominated by conifers, ginkgoes, and cycads, all members of the gymnosperm lineage. Gymnosperms, meaning "naked seed," usually grow seeds in in cones, although some like yews and ginkgoes produce seeds in fleshy, fruit-like structures. The presence of seeds means that these cones are also packed with protein, and form a nutritious snack for many animals. During the conifers’ long reign, dinosaurs were among the first to take advantage of this glut of supplements. 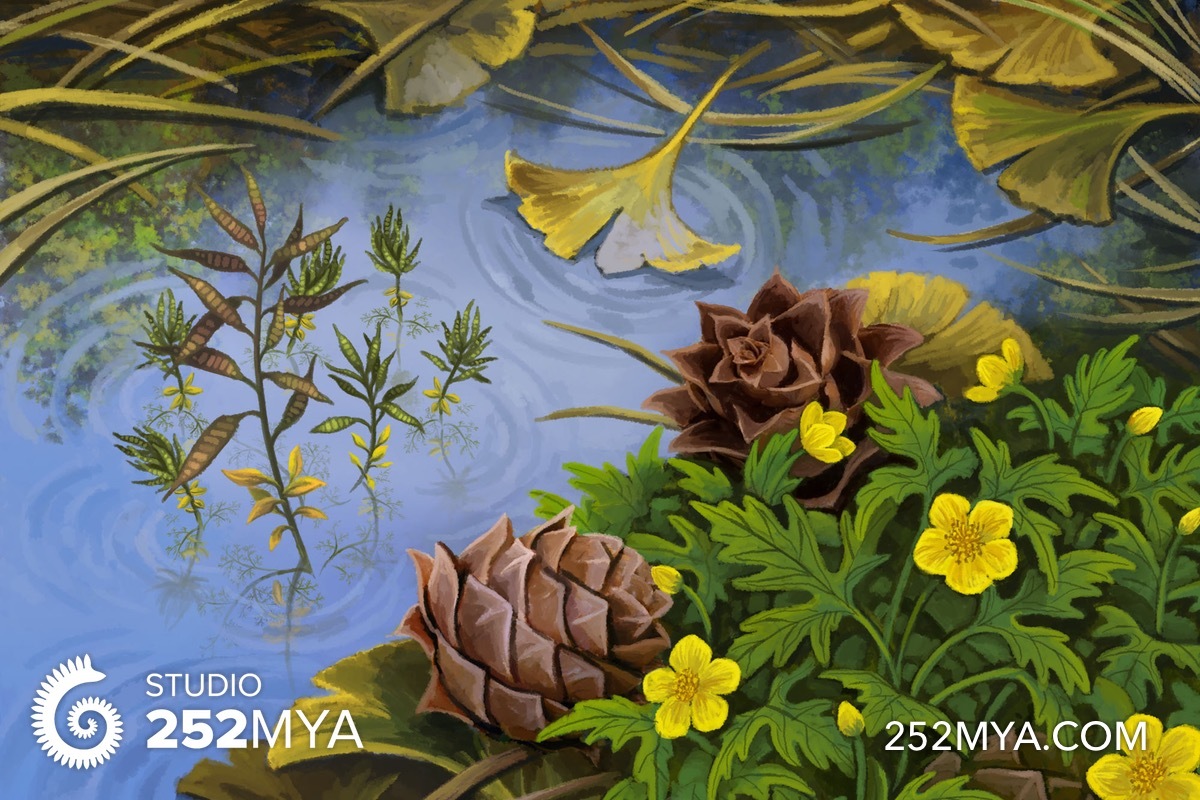 Seeds and flowers of Yixian Formation
The Yixian Formation of China is known for its exquisite preservation of fossils. Notable plants like the aquatic early flower Archaefructus and the ancient buttercup Leefructus are found alongside familiar plants like conifers and ginkgos.
Franz Anthony 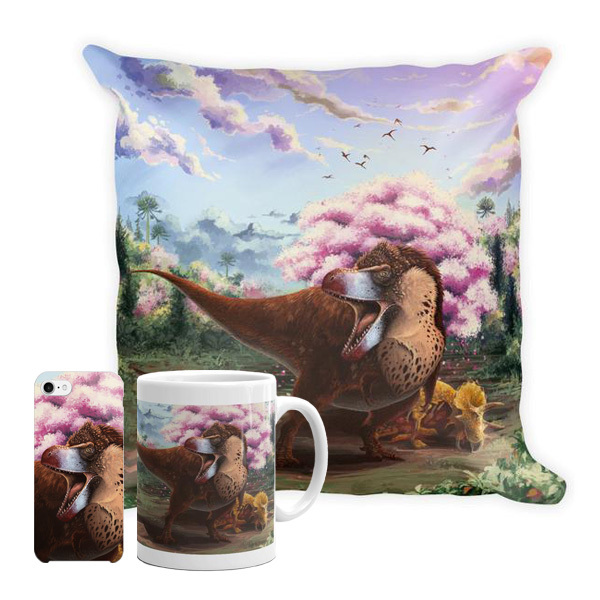 Get Franz's artwork as prints and merchandise from 252MYA.com today!

The Yixian Formation is famous for its feathered dinosaurs, but  living alongside them were early and diverse angiosperms as well. One of the most well-known is Archaefructus, known from several species, and is thought to be one of the most primitive flowering plants known. It lived with its roots, stems, and fern-like leaves partially submerged in shallow water but held its long floral stalks high above. The floral stalks lacked petals, but had numerous male and female floral parts, with the male parts lower on the stalk, and female parts higher up.

Another, more familiar and modern-looking flowering plant was present in the Yixian as well, the early buttercup relative Leefructus. The fossils of Leefructus show long stems with leaves emerging at nodes like living buttercups. A single fruit is also preserved, and it looks remarkably similar to the spiky fruits of many living species of buttercup.

Other ancient flowering plants can be found living today, alive and well among more recent varieties. Among the most famous of these early flowers belong to the genus Magnolia. Their age is a testament to their hardiness, with the oldest of them lasting over 95 million years. We find magnolias coexisting comfortably with some of the most famous North American dinosaurs. Fossil beds from the last ten million years of the Cretaceous show forests and swamps that are full of them.

On the whole a flower is a complex reproductive organ. It has an ovary with ovules, or plant eggs, enclosed within a series of colorful petals. The other sections include the stamen, or male part of the flower which releases pollen grains. After fertilzation, the seeds develop within the enlarged ovary which becomes a fruit covering the seeds. Angiosperms, whose name means "covered seed," are named for this trait rather than their flowers.

Some have energy-rich nectar to tempt small, specialized animals into pollinating them. This ingenious strategy is much more reliable than using wind to pollinate a plant. This symbiotic relationship gave rise to a wonderful variety of strange flowers that attracted animal pollinators. The earliest nectar-loving insects date back to the Jurassic, while butterflies, bees, and wasps came around the Cretaceous, when there was a huge evolutinary burst in flowering plants. Later on, hummingbirds and sunbirds evolved to feed on nectar, using their narrow bills to probe deep into tube-shaped flowers.

Plant and animal interaction isn't limited to nectar. Some plants, like certain kinds of orchids, evolved to look and smell like certain types of bees and wasps. They mimic the form of the female of the species, fooling males into pollinating them. Other plants rely on animals to spread their seeds after they mature. Primates for example, are voracious consumers of fruits and incredible color vision is needed to tell if a fruit is raw or ripe and may discard seeds far from the parent plant. Other plants require animals to eat and then pass seeds in dung before germination, sometimes carrying them far and wide.

Although we may dismiss them as just another method of reproduction, seeds are an important evolutionary innovation that allowed some plants to dominate the Earth. This advantage led to the incredible diversity seen today from towering conifers, to trailing clovers, from water lillies to cactuses. At the end of the Cretaceous, one particular lineage of hardy flowering plants emerged. The grasses would set their roots in the most extreme environments on Earth to transform the world and usher in the Age of Mammals.

This is part four of a five-part series on the evolution of plants.