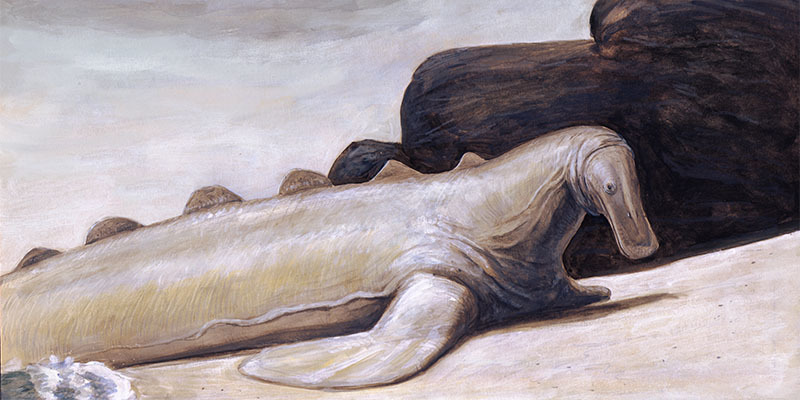 Extinct marine reptile had the face of a platypus

almost 2 years ago by Pete Buchholz

All Posts
Nearly a quarter billion years ago an otter-sized, armored, platypus-faced, marine reptile paddled in tropical lagoons on the shores of islands that would become southern China. This weird species is part of a diverse lineage that was restricted to a few million years and those tropical lagoons.

A team of scientists led by Long Cheng has described and illustrated two new skeletons of the weird hupehsuchian Eretmorhipis found in the Lower Triassic Jialingjiang Formation of Hubei Province, China. These skeletons are the first of that species found with skulls, and they are unlike anything seen in any marine reptile.

The skulls are unusually small, have small eye sockets, and have a flattened toothless bill. They bear an uncanny resemblance to living platypuses. The similarities aren’t just superficial, and like platypuses, the upper and lower jaws are made of thin bony rods surrounded by cartilage.

The rest of the Eretmorhipis is just as weird, but in different ways. Above the spine are large, triangular humps of bone. The ribs and vertebrae of the torso and tail are thickened and made most of the body very stiff. Finally, the arms and legs were modified into paddles and provided the only means of locomotion. In total, the body was armored and stiffened, resembling a boxfish more than a crocodile. 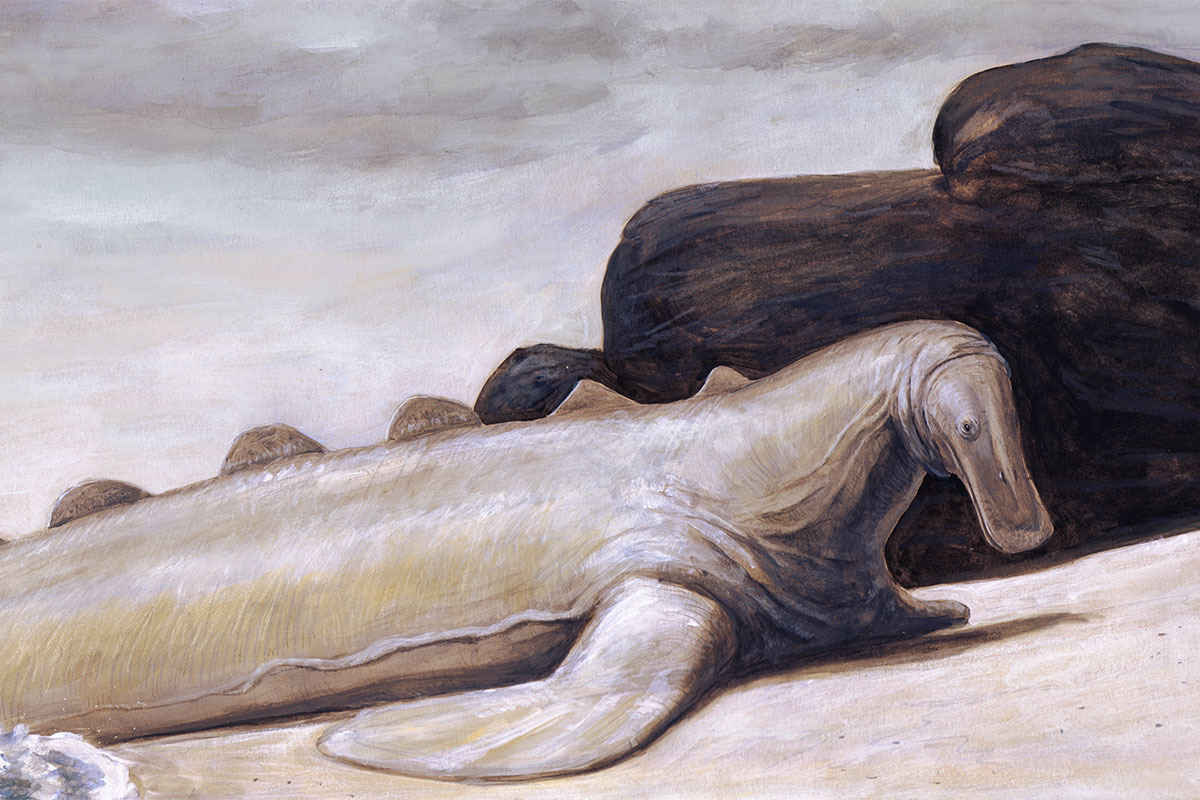 The weird combination of small eyes, toothless bill, and stiff body led Cheng and colleagues to propose that Eretmorhipis filled an unusual role in the Early Triassic marine ecosystem. They concluded that it probably hunted small invertebrates in murky water while relying on touch. Extremely small eyes, like those of Eretmorhipis, are not found in vertebrates that rely on sight to hunt. Likewise, the broad cartilaginous bill was well-served by nerves, and could have picked up the slack left by the small eyes.

Like boxfish, Eretmorhipis was probably a slow, but deliberate swimmer, sacrificing speed for maneuverability.

Hupehsuchians were a peculiar group of marine reptiles that are known only from Lower Triassic rocks in China. They all show different degrees of body stiffening, with those most closely related to Eretmorhipis being the least flexible. The other hupehsuchians also have toothless bills, but they’re long and pointed, resembling herons or swordfish, probably indicating a different method of feeding.

Hupehsuchians lived when most of the Earth’s continents were joined together in a single supercontinent, Pangaea, but the hupehsuchian homeland was not part of this landmass. Instead, the land that would become central and southern China was a group of large islands surrounded by tropical seas, much like modern Indonesia and the Philippines. They flourished in the warm shallow seas off these islands, only to become extinct in the first five million years of the Triassic Period.

Hupehsuchians and other marine reptiles, like their close relatives the ichthyosaurs, emerged and diversified rapidly in the aftermath of the largest extinction in Earth’s history, the Permian-Triassic extinction.

The rapid emergence of different marine and terrestrial reptile groups after the extinction is an example of an adaptive radiation. After mass extinctions, surviving lineages diversify at an accelerated pace because they’re unconstrained by competition from organisms already occupying ecological niches.

The discovery of the two new Eretmorhipis skulls is the latest amazing find of hupehsuchian fossils in the last few years. Each new discovery sheds more light on these intriguing and mysterious animals. Future finds will surely help paleontologists understand the origin, diversity, and disappearance of these weird marine reptiles.