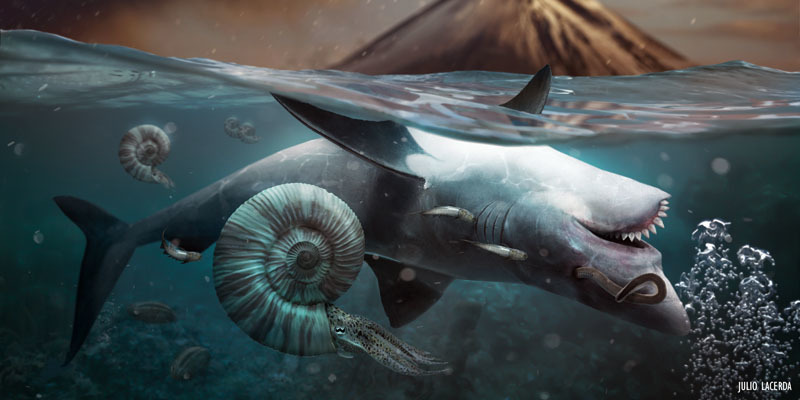 The Great Permian Extinction: When all life on Earth almost vanished

All Posts
Of the five mass extinction events on Earth, the one 252 million years ago during the Permian Period was the most devastating. The Permian mass extinction, or “Great Dying,” killed 9 out of every 10 species on the planet and its effects are still seen today.

Earth has undergone five mass extinction events in the past 550 million years; one at the end of each of the Ordovician, Devonian, Permian, Triassic, and Cretaceous periods, and a sixth is arguably occurring right now. The worst of these extinctions occurred about 252 million years ago and marks the geologic boundary between the Permian and Triassic periods (P-Tr boundary). The Permian mass extinction may have occurred in one to three pulses that killed almost all life on Earth.

During the Permian, Pangaea, a large supercontinent, had formed and was surrounded by the large Panthalassic Ocean. The immense size of Pangaea caused the interior portions of the continent to be cool and dry, while the coastal portions were typically warmer and damp.

Increasing temperatures throughout the Permian allowed for a rapid diversification of organisms. Terrestrial plant life exploded and provided an important source of food for many land animals and allowed life on land to diversify. One such type of plant is the extinct genus Glossopteris, with its tongue-shaped leaves. The increase in plant life contributed to an increase in insect life because insects form close associations with plants. Hemipterans (true bugs) with sucking mouthparts began to appear in the Permian. Also alive during this time was Meganeuropsis, a dragonfly-like insect genus that was the biggest of all known insects. 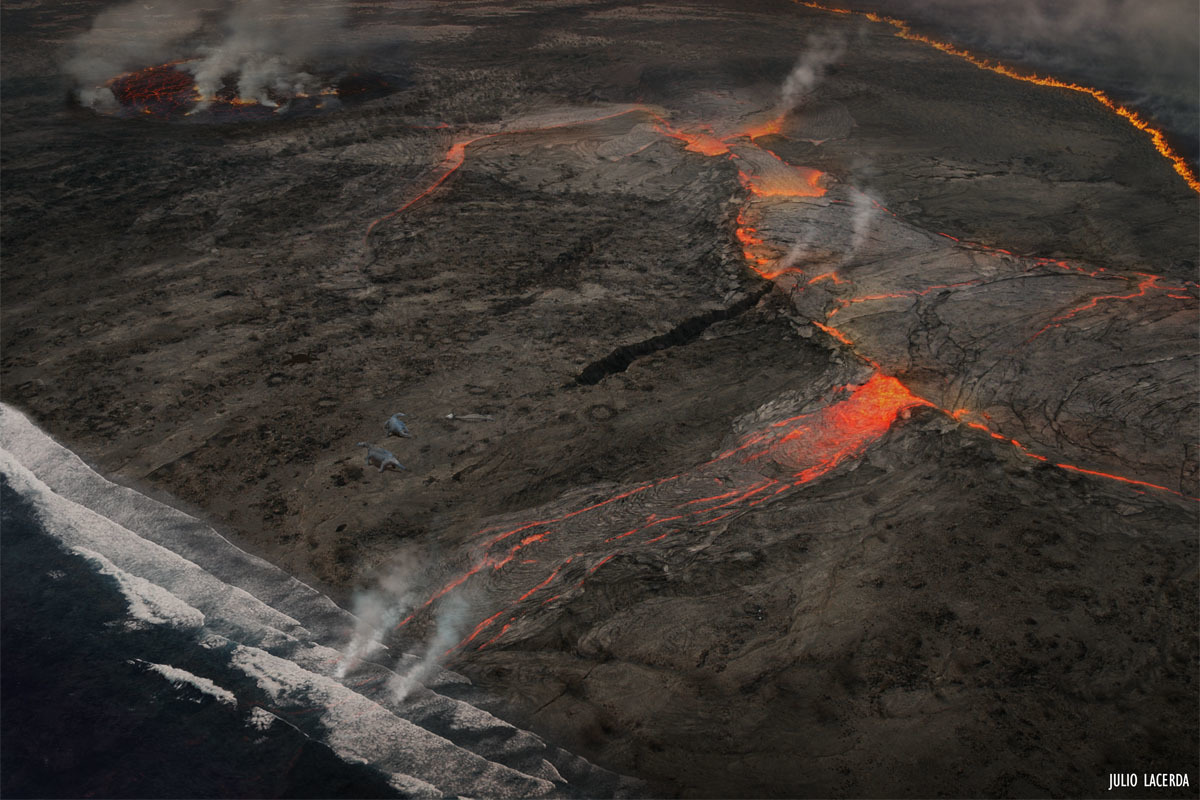 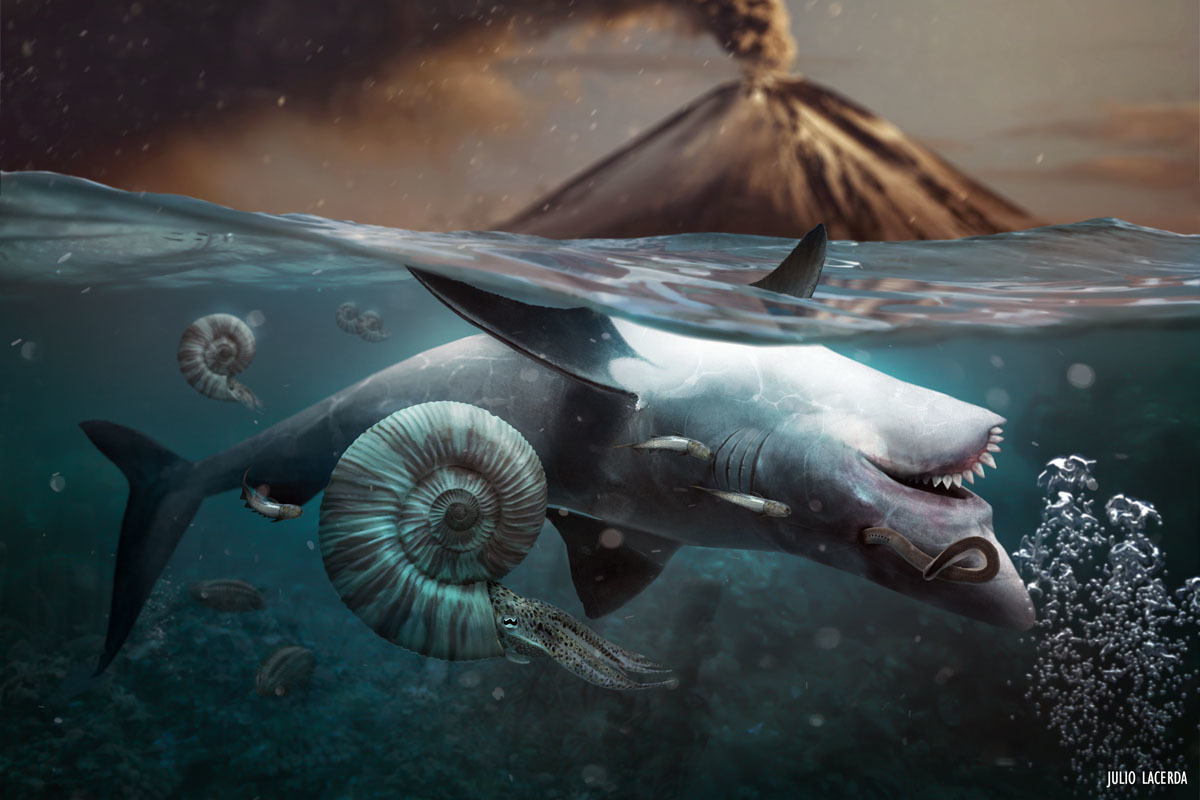 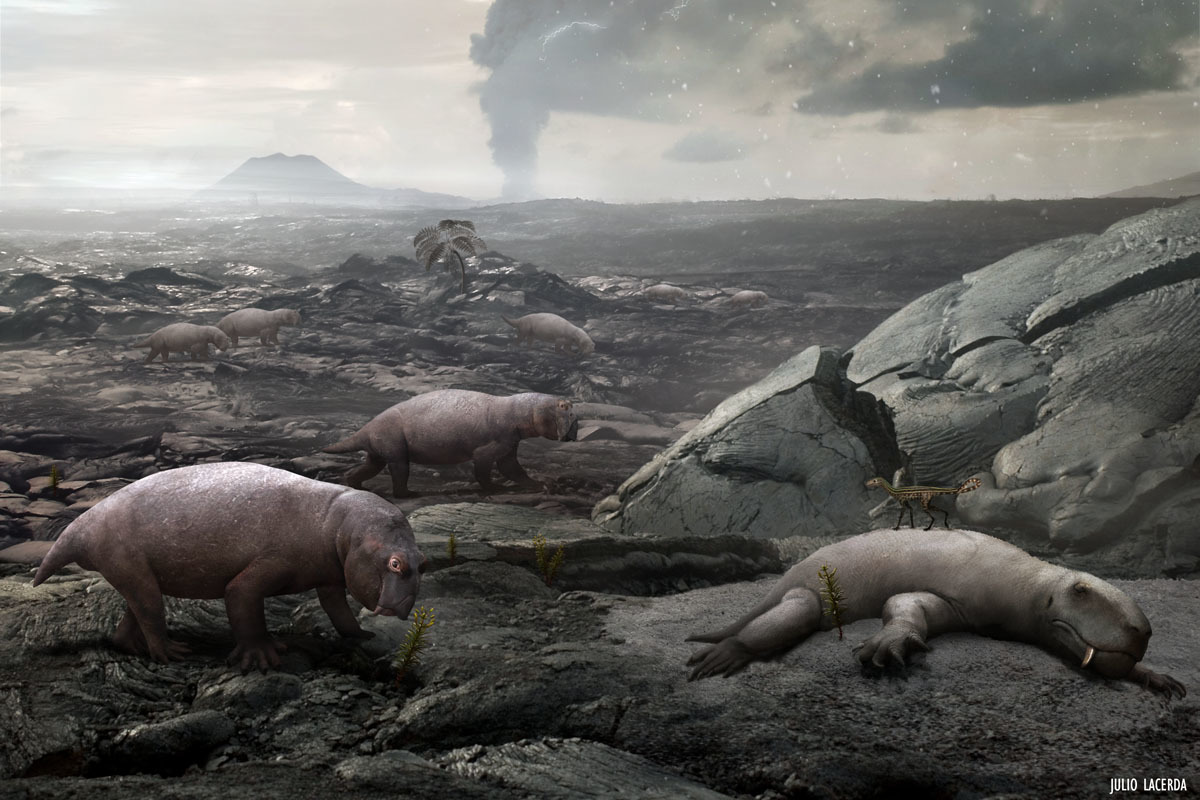 Two important types of animals dominated land during the Permian; synapsids and sauropsids. Synapsids, which had one temporal opening in their skulls, are thought to be the ancestors of mammals. A well-known synapsid alive during the Permian was Dimetrodon, which is known for the large sail on its back that is held up by bony spines. Dimetrodon is commonly referred to as a dinosaur or as an ancestor of dinosaurs when in fact, it is more closely related to mammals than to dinosaurs and went extinct during the Permian, around 40 million years before the appearance of the earliest dinosaurs.

In the shallow oceans, reefs were large and life among the reefs was diverse. Ammonites and brachiopods were very common. Little is known about life in the deeper parts of the Panthalassic Ocean because most fossil evidence is deeply buried, but cartilaginous fishes such as sharks and rays were common and true bony fishes were becoming more common.

At the end of the Permian, conditions became unsuitable for most life and about 95% of marine species were eliminated as well as 70% of terrestrial species in a very short period of time, in geologic terms. It was also one of the few known mass extinctions of insects. Many plant species also went extinct. There is fossil evidence that there were once vast coniferous forests in modern day Europe that died out in the Permian. Fungi were not impacted as severely as other organisms, likely because of the abundance of dead plant and animal material available for their consumption.

Because of the enormous number of species that became extinct, the P-Tr mass extinction is nicknamed “The Great Dying” and its impacts are still noticeable today. For example, bivalves, which were not a large part of the Permian marine fauna, were able to dominate the oceans over other organisms as many gastropod and brachiopod species were killed. Bivalves are still very common in today’s oceans.

The cause of the P-Tr extinction is still debated by scientists. It isn’t clear whether it happened gradually over many thousands of years, or if it happened because of sudden catastrophic events.

One possible cause of the extinction could have been a large volcanic event that produced flood basalts, also known as Siberian Traps. The eruption covered around 2 million square kilometers with lava and was one of the largest volcanic events in Earth’s history. The eruptions may have caused large amounts of carbon dioxide to be released into the atmosphere and caused a large-scale global warming effect of more than 10°C on land and around 8°C on the ocean surface in a short period of time. The eruptions may have also caused acid aerosols and dust clouds to be released into the atmosphere which blocked out the sun and prevented photosynthesis from occurring, effectively causing many food chains to collapse.

Another possible cause, but happening gradually over millions of years, was the forming of the supercontinent Pangaea. When Pangaea was finally formed in the middle of the Permian, there was a substantial decrease in the area of shallow marine environments. These shallow environments were the most productive parts of the oceans and produced much of the oxygen on the planet. Without them, the planet may have seen a decrease in the amount of oxygen available. These areas were also home to many organisms that were the base of food chains. A decrease in the area of these organisms’ habitat meant a decrease in the availability of food for the majority of marine organisms. The formation of Pangaea may have also had an effect on ocean circulation which in turn affected nutrient circulation in the oceans, and may have also affected global weather patterns.

Another possible cause of the extinction is an impact event, much like the meteor that famously killed the dinosaurs at the end of the Cretaceous Period. The Permian extinction appears to have happened in two or three pulses of extinction. Two or more separate impacts could have possibly accounted for these pulses. Some possible evidence for impact events are meteorite fragments in Australia, rare shocked quartz in both Australia and Antarctica, and craters in Australia. If a meteor did impact Earth during this time, it more than likely landed in the ocean. Since the ocean floor is recycled by tectonic activity every 200 million years, any evidence of the impact is likely gone./p>