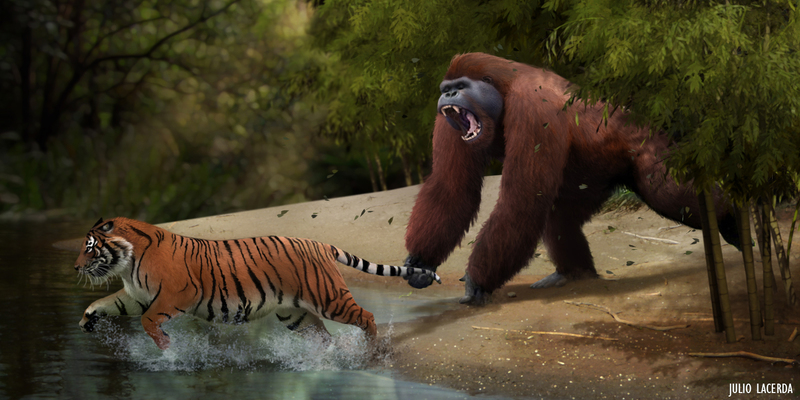 What killed the real-life King Kong?

All Posts
One of the most mysterious huge animals in the fossil record is the ape Gigantopithecus. Only a few bones have ever been found, and we still do not know the secrets to its existence. One thing though, is quite clear: Thanks to a team from the Seckenberg Research Institute in Frankfurt, we finally know why it is no longer among us today.

The massive ape Gigantopithecus is the closest thing to a mythological giant that we have in the fossil record. Since its discovery in 1935 by anthropologist Ralph von Koenigswald in a Chinese apothecary’s shop, it has been the subject of never-ending debate. For one, we have no idea what killed this ape off while its relatives still exist in Asian forests today. Whatever we know about it has to come from modern apes. Gigantopithecus was related to orangutans, but may have lived on the ground, somewhat like an oversized gorilla. This animal is legendary for its size, even though it is known from barely anything but teeth and bits of jaw.

From these scant remains, males have been estimated up to three meters (9.8 feet) tall on two legs and weighing close to half a ton. It hails from East and Southeast Asia, from India to Vietnam, through China where the first and also biggest individuals were found. Troops of these huge creatures may have made their living in the bamboo forests of the region. As an adult it probably had nothing to fear from, other than big cats like tigers, and probably other hominids similar to us. Even the most massive of apes might have been helpless against tool-using Homo erectus and even archaic Homo sapiens.

However, these encounters do not show up in the fossil record. This is mostly due to the paucity of Gigantopithecus remains to begin with, so only speculation can reconstruct what such a struggle might have looked like. It is safe to say though, that overhunting by early man did not cause its extinction. But how did this huge ape really die out, and why? 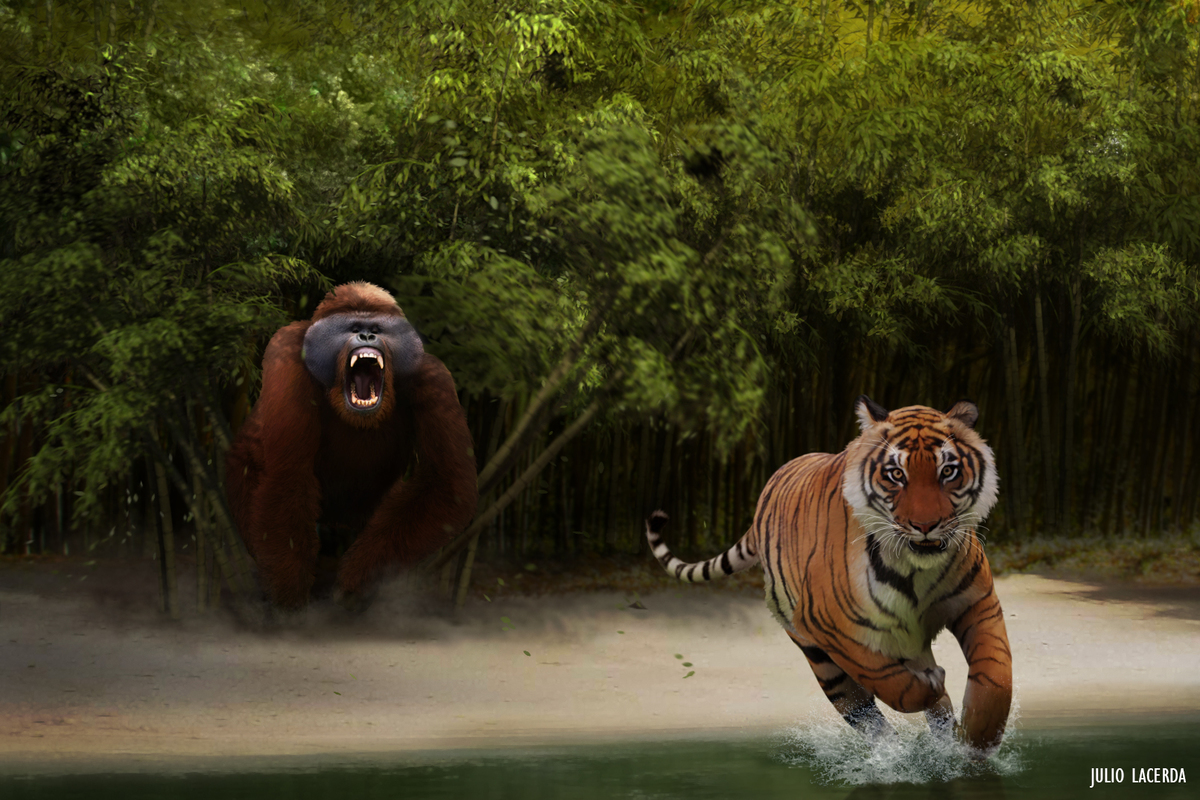 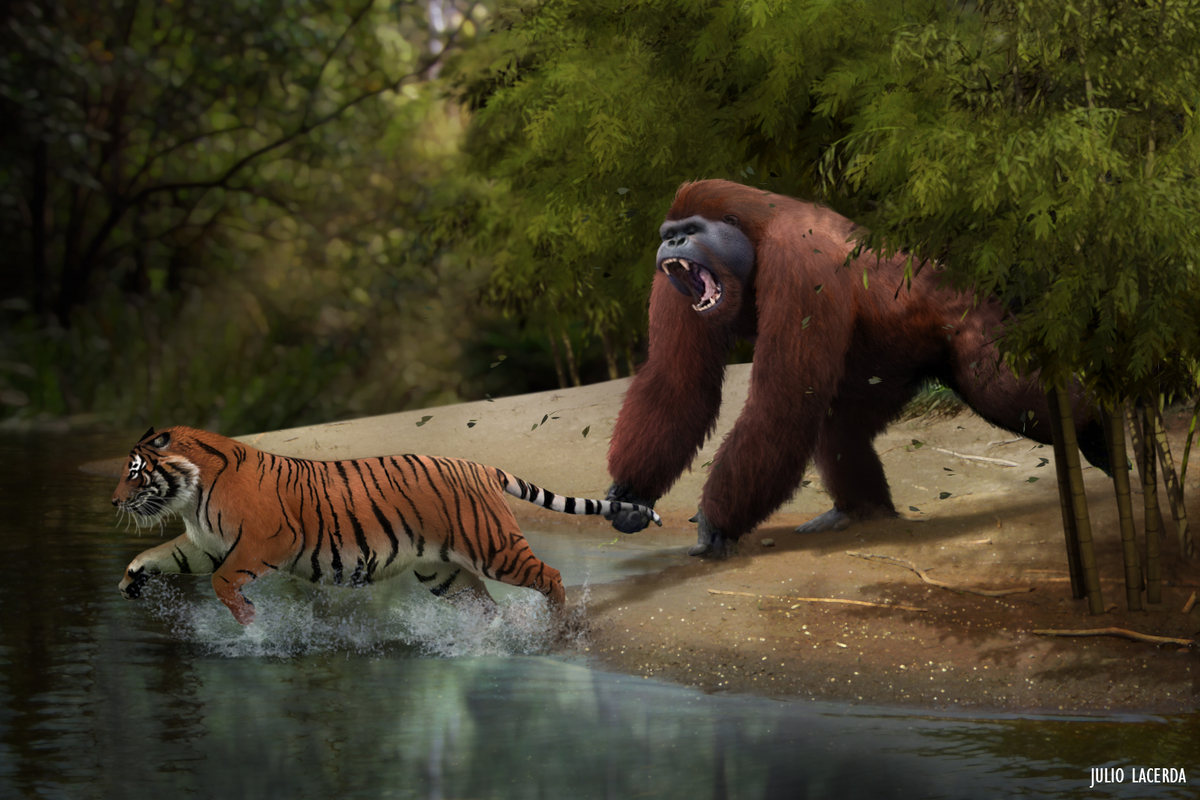 The aftermath
Even the fiercest and most persistent of predators are no match for the fury of a half-ton male primate.
Julio Lacerda

Recent evidence from scientists at the Senckenberg Centre for Human Evolution and Palaeoenvironment (HEP), in Tubingen from Frankfurt’s Seckenberg Research Institute have revealed that Gigantopithecus’ huge size and dietary preferences were its handicap. It was headed by an international team, led by Prof. Dr. Herve Bocherens and colleagues Prof. Dr. Friedmann Schrenk and PD Dr. Ottmar Kullmer.

The fossils used in the study include the first-ever finds from China as well as teeth from Thailand. In these areas, where the apes were most common, climate change was turning the thick bamboo forests into open savannahs. Gigantopithecus has a rather long existence in the fossil record, with some of the earliest finds dating back over nine million years. On the whole the Pleistocene is known as a time of great and sometimes sudden climatic fluctuations, the most famous being the multiple glacial events or ice ages that signaled its end. This succession of change after change might have put greater pressure on the ape and its lifestyle.

Seckenberg researcher Bocherens adds that the animal was rather limited in its area. He of course states that by no means was Gigantopithecus specialized to a single dietary type, but merely that both it and its main methods of subsistence were limited to a certain type of habitat. Both localities, China and Thailand, were subject to this alteration, and the extinction of the apes might have been slow rather than a quick event.

Gigantopithecus molars show signs of cavities and enamel wear just like those in that other famous bamboo-eating animal, the giant panda. Bamboo is a nutrient-poor diet for any large mammal, and anything that feeds of these tough leaves and stems has to spend a long time eating and digesting. Both pandas and even modern gorillas use their deep, powerful jaws to crush the huge stems of these grasses. While Gigantopithecus had similarly strong jaws, its size meant that it had to feed more often and for longer periods. This gave it a slow metabolic rate, a potential killer in an unstable world.

And then there is the size factor. Being magnitudes larger, the big apes must have been even harder-pressed to fill themselves on this tough diet. To supplement themselves, pandas hunt small animals and fill up on fruits, yams and carrion on occasion. Gigantopithecus did the same with nutritious fruits and seeds. But their weight and bulk made it impossible to perform that most stereotypically apelike action: Climbing trees.

Unlike modern orangutans, the largest of Gigantopithecus individuals were unable to climb trees to get food off the ground. Even big male orangs spend much of their time on the ground, while the young and females are much more at home in the branches above. Certainly, a titanic primate of 500 kilograms could never hope to get up a tall tree. Their great strength may have helped them take down tall bamboo stems and smaller, younger trees, but in the long run, this strategy proved to be ineffective. The giants lost out in the end. The last fossils of this huge animal are 100,000 years old. Despite its untimely extinction it did survive very long in the fossil record, existing alongside our own ancestors before vanishing at last.