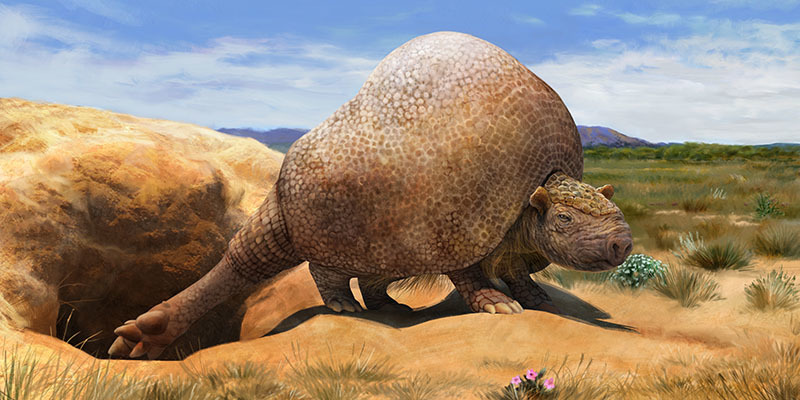 The giant armadillos of the Americas

over 2 years ago by Katherine Kurowski

All Posts
In 2015, what was thought to be a dinosaur’s egg by a passerby was discovered 25 miles (40 km) south of Buenos Aires, Argentina. The meter-long “black scaly shell” was later identified as the carapace, the hard upper shell, of an extinct armored animal called a glyptodont.

Glyptodonts, members of the animal subfamily Glyptodontinae, are extinct large, heavily armored mammalian herbivores that evolved in South America that later radiated to North America. They went extinct thousands of years ago, but their fossils are commonly found in the region.

The name “glyptodont” refers to their deeply grooved teeth, which were suitable for grazing. Their body armor, the carapace, was made of bony deposits in the skin called osteoderms.

Among the best-known glyptodonts is Doedicurus clavicaudatus. Roughly the size of a small car, it was also the largest in its group weighing between 1.91 and 2.37 tons (1,910 and 2,370 kg). With an overall length of about 13 ft (4 m), its most distinctive feature was its long muscular tail that was shaped like a spike-adorned pestle. The largest of the spikes were located at the “sweet spot” along the length of the tail, to inflict maximum blows against its opponent but with minimal risk to itself. 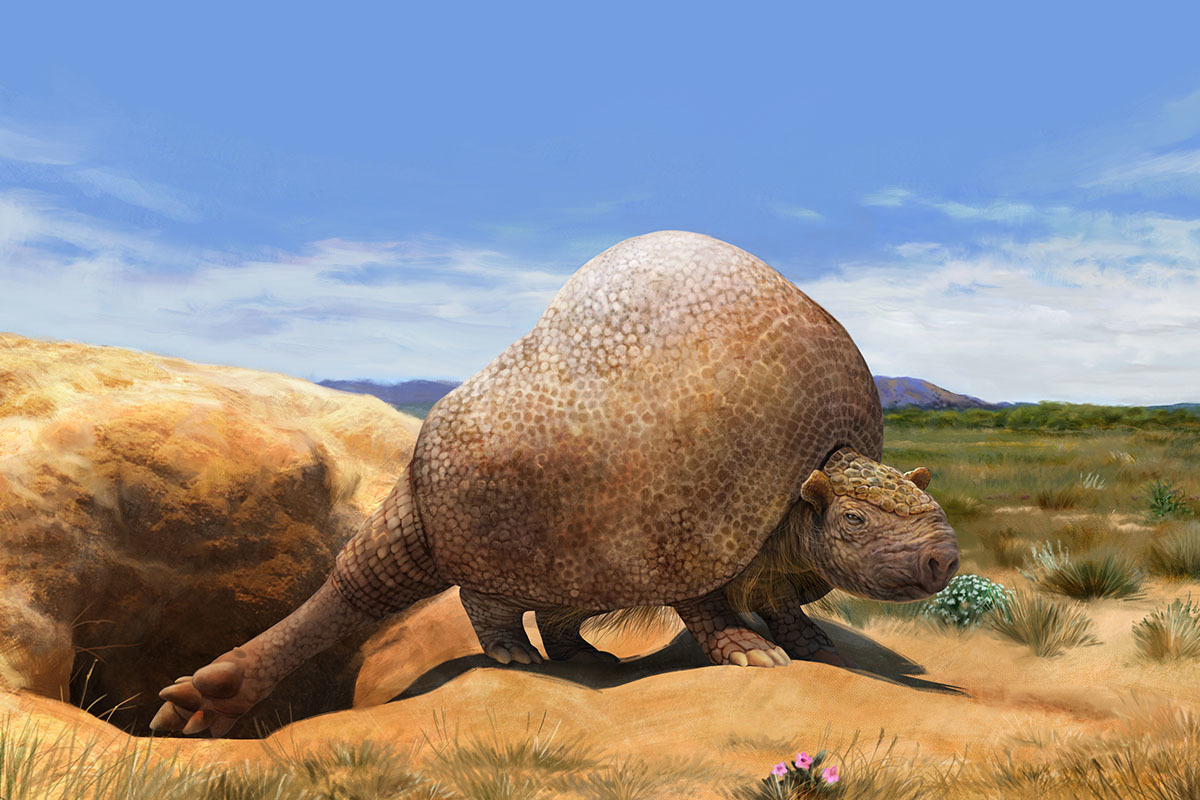 This gigantic armadillo from South America was the largest of its kind, collectively known as glyptodonts. In males, the tail is known to have had spikes at the end, which was likely used to resolve conflicts with its own species.
Lucas Lima

This tail mace was presumably used primarily in intraspecific combat, in which the members of the same species compete over territory and mates, rather than for defense against predators. The latter would have been difficult to do since the animal’s field of vision was so limited, and “blindly thrashing” its tail would have been a somewhat ineffective attempt at protection. As with fighting with a mace or playing baseball, these weaponized tails were better suited to more stationary situations than fighting off fast predators.

Fractures found on fossil carapaces were likely produced by the same amount of energy be produced by tail muscles. The natural structure of the carapace, it seems, evolved to withstand the powerful blows from large objects, such as the tail clubs of fellow glyptodonts, rather than the teeth of its predators.

For decades, glyptodonts were thought to be relatives of today’s armadillos based on their general body shape and their having body armor, among other things. And it was generally accepted that glyptodonts fell within the superorder Xenarthra, comprising such placental mammals as South American anteaters, sloths, and armadillos.

However, this ancient group differed in so many respects to today’s armadillos that the exact relationship was difficult to determine. For one, glyptodonts were, in general, massive creatures and were considered megafauna by the last ice age. In contrast, pink fairy armadillos measure between 3.5 and 6.5 inches (9 and 17 cm) and are adapted to burrowing. For another, glyptodont carapaces were made of fused parts called scutes, so unlike today’s flexible armadillos that can roll up into a ball so as to protect their soft bellies when feeling threatened. Also, their eating habits differed. While glyptodonts grazed on grasses with their grooved teeth, modern-day armadillos primarily eat insects.

So, although there has always been a vague idea that glyptodonts were related to armadillos as a fellow xenarthran, their evolutionary position remained a baffling mystery until somewhat recently.

To uncover the answer, a research team in 2016 led by Frédéric Delsuc and Hendrik Poinar recovered ancient DNA from a carapace fragment of a specimen of Doedicurus from a museum in Buenos Aires. To fish out Doedicurus’s DNA out of an extract containing DNA from plenty of other sources, the researchers used RNA baits based on the sequences of glyptodonts’ living relatives, that is, other xenarthran species.

Researchers compared the nearly complete reconstructed genome of Doedicurus against those of living xenarthrans. According to the study, Doedicurus’s belongs to the family Chlamyphoridae, which contains multiple subfamilies: Glyptodontinae, the glyptodonts; Chlamyphorinae, the pink fairy armadillos; and Tolypeutinae, the three-banded, naked-tailed, and giant armadillos.

Additionally, a second, independent study was conducted in 2016 by Kieren J. Mitchell and research team. They performed a similar reconstruction and analysis of DNA from the carapace of another Doedicurus specimen and concluded that their results revealed that “glyptodonts fall within the diversity of living armadillos,” supporting the previous study led by Delsuc.

Despite the differences in body size, carapace structure, and eating habit, glyptodonts likely did not diverge from other armored mammals at a very early point in their evolutionary history, as was the old view. “Glyptodonts, in fact, represent an extinct lineage that likely originated 35 million years ago within the armadillo radiation,” said Poinar. This estimate is consistent with the earliest fossils found from this subfamily.

Glyptodonts didn’t start out as the massive creatures we know them. It is estimated that the last common ancestor of glyptodonts and their living armadillo relatives weighed in at a mere 13 lb (6 kg), which is about the same size as today’s nine-banded armadillos. Later, glyptodonts evolved from medium-sized forms (about 176 lb, or 80 kg) to become true two-ton megafauna.

This also explains why some older members of the family do, in fact, appear to have banded shells. “We speculate that the peculiar structure of their unarticulated carapace might have evolved as a response to the functional constraint imposed by the size increase they experienced over time,” noted Delsuc.

So, how are gigantic herbivores that whack each other related to small insectivores that roll into balls?

It seems that the climate may have played a role in glyptodont evolution. As the earth began to cool with the impending ice age, wet forests were gradually replaced by dry, open woodlands and savannas, wherein grasses thrived. Coincidentally, assuming glyptodonts had a predisposition to eating grasses, this change of environment and the abundance of food supply encouraged their evolution towards herbivory as well as gigantism.

And as with most large animals, hiding is hard to do, especially from predators. To compensate for this increased vulnerability, the heavy, fused armor may have evolved.

It is also possible that their gigantic size evolved as a defense against predators. Doedicurus at about 2 tons was generally larger than the South American carnivores of the time, weighing twice as much as the giant short-faced bear and was 10 times the weight of saber-toothed cats.

Once heavy armor evolved in early glyptodonts, a trend towards increasing armor and size may have been driven by intraspecific competition.

And was Doedicurus’s spiky tail a rarity?

There seems to be a trend that all animals with a tail weapon met four requirements: the animal must eat plants; be large, in other words, too big to hide yet not big enough to intimidate with size alone; have body armor, like a carapace; and have a “stiff back,” meaning the body doesn’t easily bend side-to-side so as to maintain steady footing and prevent injury when swinging the tail. Doedicurus most definitely fulfilled the criteria.

The existence of massive glyptodonts likely coincided with the arrival of early humans in the Americas. Archaeological evidence suggests that these humans hunted the creatures and used their carapaces as shelters. In the end, despite their colossal size and protective armor, glyptodonts went extinct around 10,000 years ago in the last ice age while their much smaller, more lightly armored, and flexible armadillo relatives survived.


Related Stories
Final mammoth populations suffered from "genetic meltdown"
The cave hyenas of ice age Europe
What would you get if you mixed a dog and a bear?
Saber-toothed kittens were born bruisers
Stegodon, the “elephant” with sideways trunk
//sulc.us/hr5sx
/articles/the-giant-armadillos-of-the-americas/