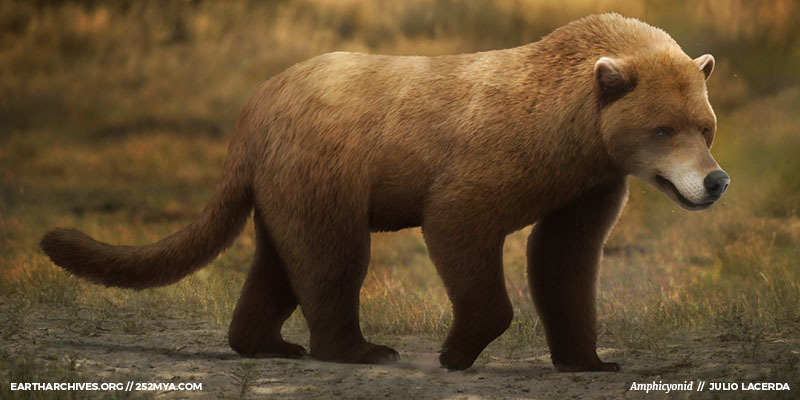 What would you get if you mixed a dog and a bear?

All Posts
Amphicyonids were a family of carnivores that lived in North America, Europe, Asia and Africa for about 45 million years. They were part of a group of mammals called “Caniformia”, which includes animals such as seals, raccoons, weasels, skunks, otters, bears and dogs. The similarities of Amphicyonids and these last two are what gave them the colloquial name of “bear-dogs”.

Bear-dogs varied in size and shape throughout their evolutionary history. The earliest members of the group were smaller and more agile, while later amphicyonids grew much bigger. In general, they had dog-like body proportions but a heavier, bear-like build. Also like bears but differently than dogs, amphicyonids were plantigrade. That means they walked with their foot bones flat against the ground and not on the tips of their toes, something that humans do too.

Though the bear-dogs are now extinct, their history is one of success. One of the oldest amphicyonids known is Daphoenus, a long-bodied, short-legged predator the size of a coyote that appeared in North America around 42 million years ago, not too long after the non-avian dinosaurs went extinct, in a time which mammals were rapidly diversifying. They were likely similar to modern-day bush dogs, resting in burrows and pursuing prey in short bursts of speed.

From then on, the group expanded into Asia and Europe. Cynodictis appeared 37 million years ago, and its remains were found from China to Britain. Still small and with a low-slung body, it lived like a fox, hunting small animals like rodents and taking advantage of the carcasses left by the bigger predators with which it lived. 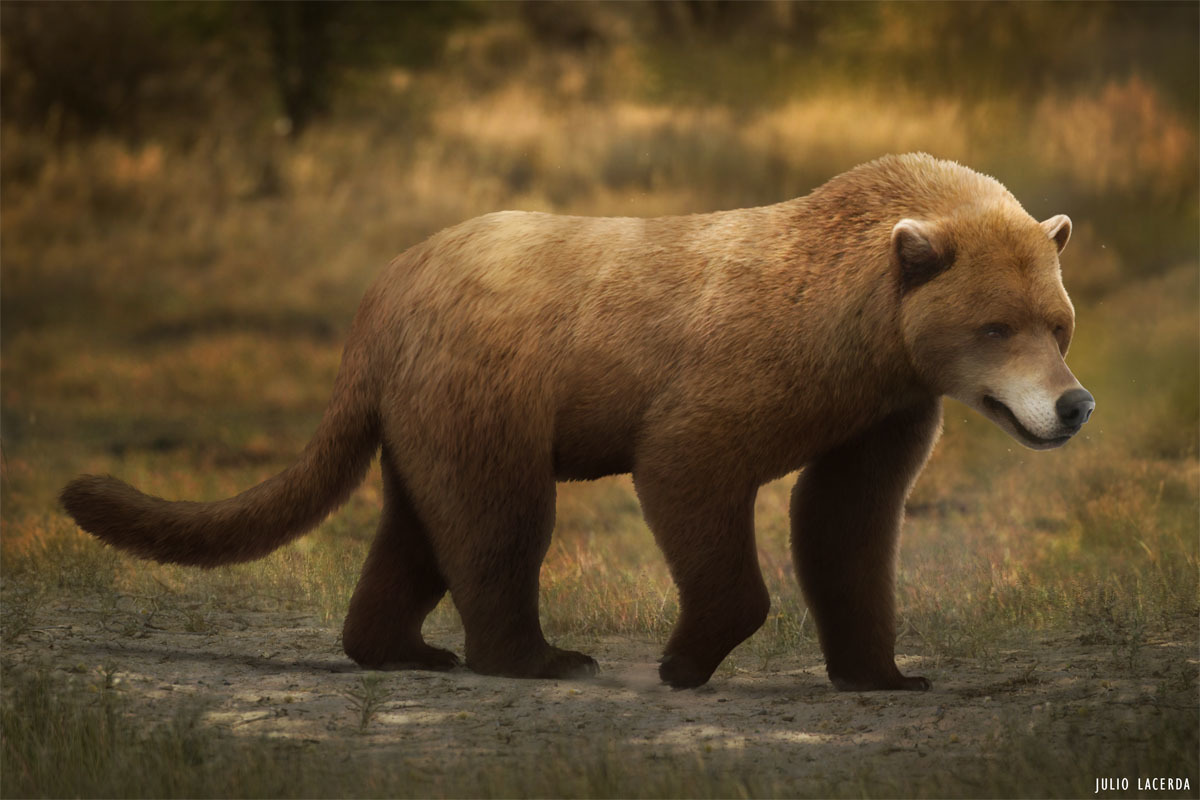 Being a relative to bears and dogs, amphicyonids would have resembled a little bit of both.
Julio Lacerda

The Oligocene period, which began around 28 million years ago, was a period of changes in a lot of Earth’s ecosystems. The world was getting a little cooler and drier, and where once the warm regions of the planet were covered in forests, now the grasses were becoming widespread and forming long expanses of prairies. This favored herbivores that could run fast and walk long distances, and also meant that predators had to adapt their strategies to hunt them without the help of forest cover.

Perhaps the bear-dogs had the perfect combination of sprint and strength. The fact is that during this time they managed to grow bigger and eventually reach the role of apex predators, displacing the groups that occupied this ecological position before, like nimravids (known as “false saber-toothed cats”) and creodonts (large-headed predatory mammals).

The following age was the heyday of amphicyonids, with the appearance of large and powerful species like Amphicyon, the one that gave the family its name. Amphicyon lived throughout the entire northern hemisphere plus Africa, emerging around 17 million years ago. This successful predator could reach 8 feet (2.5 meters) in length and up to 600 kilograms in weight. While perhaps being omnivorous like modern grizzly bears, they had very strong forelimbs and jaws and could probably tackle large prey like the strange Chalicotheres.

Eventually however, the bear-dogs met their demise. The last species disappeared by the early Pleistocene, around 2 million years ago. Researchers believe that the most important cause for their extinction was competition with more modern carnivores, the ancestors of wolves and big cats. While these competitors could have been superior in strength and endurance, the defining factor was a powerful weapon that made bear-dogs obsolete: intelligence. Studies of amphicyonid skulls showed that their brains were smaller relative to their body size in comparison to most of today’s predatory mammals. They were unlikely to hunt in packs or to process more complex hunting strategies.

So, while the bear-dogs were some of the most successful mammal lineages of all time, taking advantage from changes in the climate and environment to rise in the ecological ladder, they were outcompeted by predators that we see around us today. Their story can make us reflect on how modern animals will adapt to survive our impact on the planet, and how the underdogs of today can become the big bears of the future.