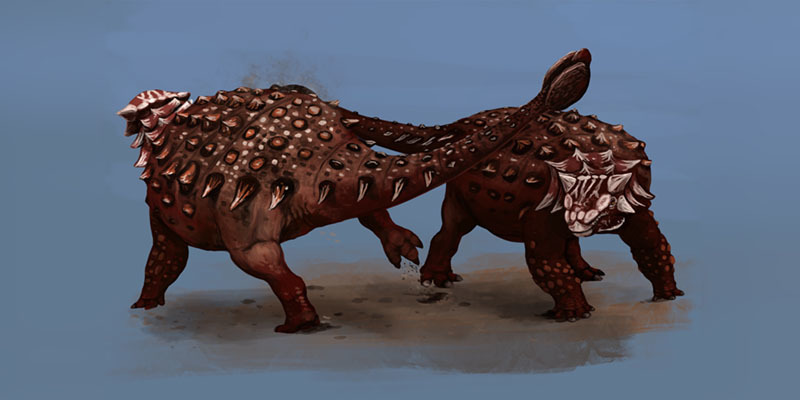 Why don’t we see more animals with tail weapons like Stegosaurus or Ankylosaurus?

All Posts
By comparing 286 different animals, living and extinct, researchers have identified traits that seem related to the appearance of weaponized tail.

No matter what state of emergency you’re in, all kinds of safety drills echo the same command: cover your head at all cost. Even if you injured a limb in the process, you’re more likely to survive than taking a direct hit to your head.

So why is it that so many animals, from elephants to narwhals, weaponized their face and not their rear? This is the question that kick-started paleontologists Victoria Arbour’s and Lindsey Zanno’s investigation.

In their study, Arbour and Zanno looked at 286 different species of amniotes, a group which includes all mammals, birds, and reptiles, to see if there were any patterns to this. 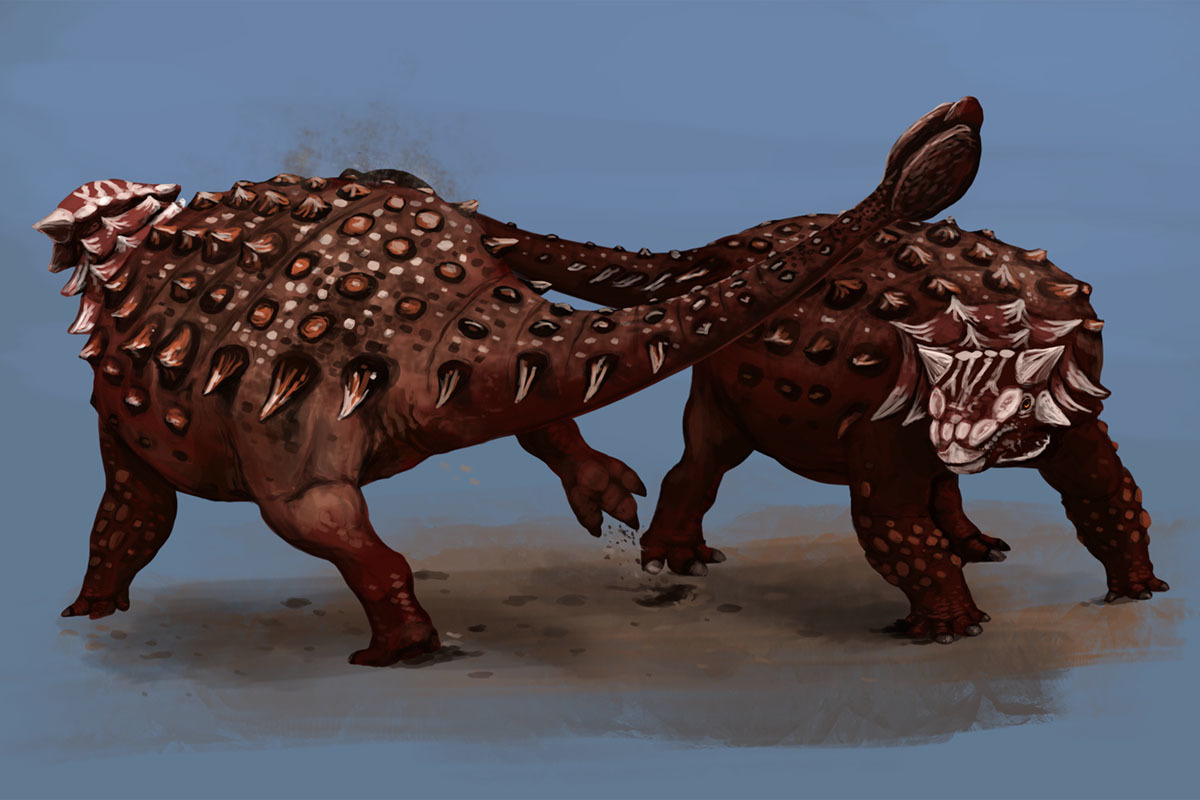 Ankylosaurus is a dinosaur known for the enlarged club at the tip of its tail.
Jack Mayer Wood 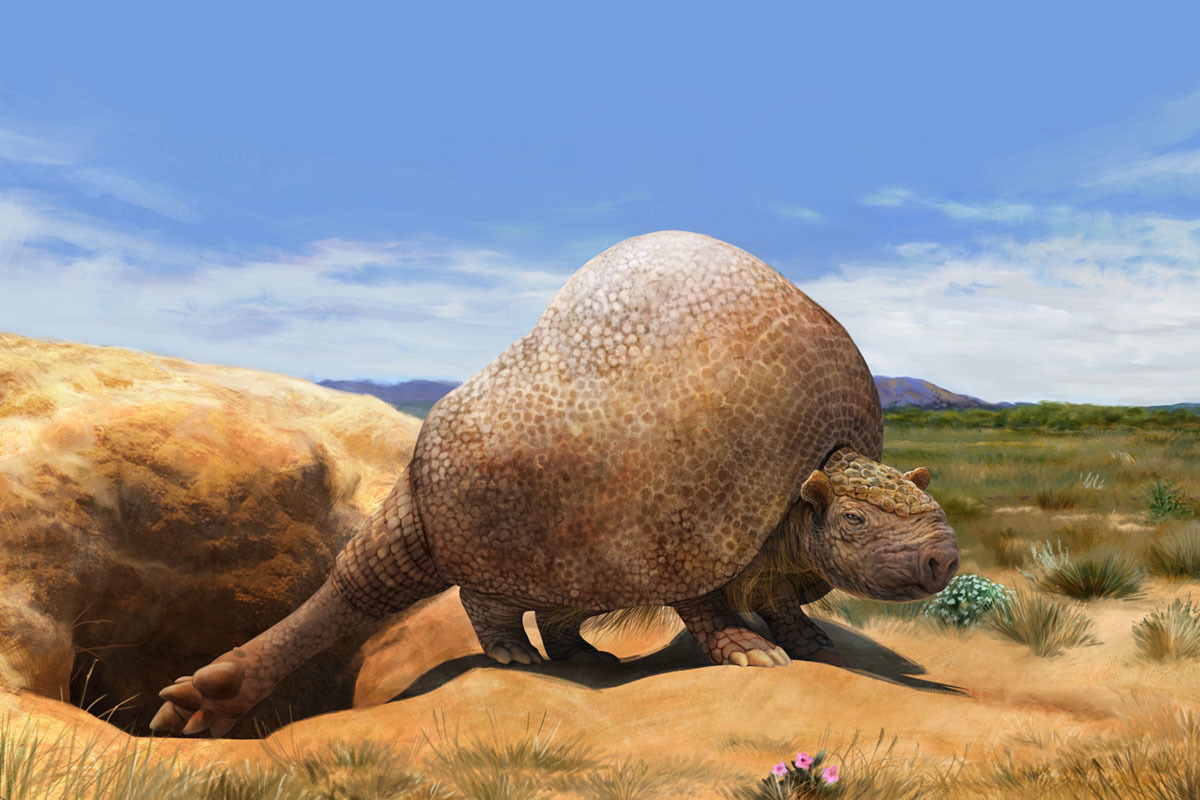 Doedicurus is a member of a group of giant armadillo called glyptodonts with the largest tail club known.
Lucas Lima

The concept of weaponizing one’s rear may seem outlandish, but it’s not a new idea. There have been various adopters of this technique in the animal kingdom. Stegosaurus, a staple in any dinosaur book, is best known for the plates lined up on its back and secondly, the lethal spikes on its tail. Its distant cousin Ankylosaurus’ claim to fame is the massive chunk of bony tail club larger than an average adult person’s torso. When swung, it can easily crush a reckless predator’s shin.

On other branches of the reptile lineage, we have Brontosaurus’ earlier relatives like Shunosaurus and two different lineages of turtles like Proganochelys and Meiolania. Meanwhile, team mammals only had the giant armadillo glyptodonts, which could grow as big as a VW Beetle. Coincidentally, they have all gone extinct.

It seems odd that this strategy doesn’t appear more often in the animal kingdom. Not a single amniote living today is known to have a tail club, despite the fact that pangolins, porcupines, alligators, and some lizards are known to whip their tails in defense. But the team’s data comparison might offer a clue on why a tail club is harder to come by.

First of all, size seems to matter in this context. In mammals, heavy armor only shows up in groups that are too large to hide, but too small to intimidate predators with size alone. For lizards, tail-lashing seems to be a last resort trick that happens only when camouflage or speed have failed them. After all, armor weighs you down and hinders your ability to run, so it might be a less desirable trait to have when you’re built for speed.

It’s also more likely for herbivores to have armor in the first place. While horns or antlers may double as a visual signal to attract a mate or keep rivals away, armor is mostly associated with self-defense from predators. Such body armor adds extra stiffness to their torso, which helps the animals to maintain steady footing when lashing a long tail. Only when a group of animals has fulfilled all these conditions, it can then add offensive power to top it off.

The two best-known examples, Stegosaurus and Ankylosaurus, have a long family history with armor that stretched back as far as 196 million years ago. Some of their distant common relatives like Scutellosaurus might be smaller in comparison, but they were protected by hundreds of external plates lined up on their back.

From there, it only took about 30 million years for Huayangosaurus, Stegosaurus’ oldest close cousin, to appear in the Jurassic Period fossil record. Meanwhile, Ankylosaurus only showed up just before the mass extinction at the end of the Cretaceous Period, although its clubless relatives showed up around the same time as the stegosaurs.

Arbour also noted that it’s rare for large herbivores to have armor in the first place. It’s even rarer to see them develop into more elaborate forms because it’s a costly trait that only pays off when other strategies fail.

We may never see another living animal turn into a Stegosaurus or Ankylosaurus lookalike in our lifetime, but at least the fossils can tell us why.

Read the original research in Proceedings of the Royal Society.