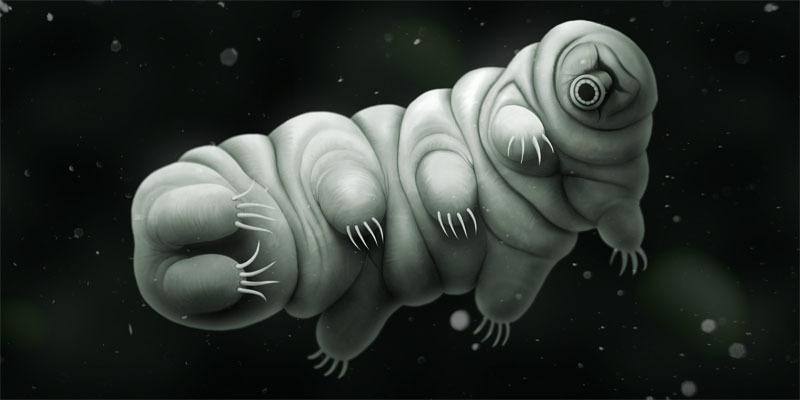 Tardigrade genome reveals secrets of their toughness and evolution

All Posts
A genetic analysis of two species of tardigrade, or water bear, has given great insight into the genetic mechanisms that help them survive extreme conditions. Although tardigrades look similar to arthropods like insects and spiders, their genes show a much closer relationship to round worms.

Although they have rock-star status in some corners of the internet, tardigrades are little known to the general public because of their microscopic size. These tiny organisms, never exceeding one millimeter in length, are highly regarded for a number of reasons, but most prominently because they are nearly indestructible. Different species of tardigrades have been desiccated, frozen, and baked; exposed to high pressures, a vacuum, toxins, and ionizing radiation. In each instance, they survive exceedingly harsh conditions.

Tardigrades are found in almost all environments on Earth, but are especially abundant on mosses and lichens. These tiny animals have sausage-shaped bodies divided into segments. Most have four pairs of plump legs with bristles on the end, and a head with a tube shaped mouth used to pierce plant cells and suck out the contents. They look like cute and alien teddy bears, which has given rise to their two English names: water bears and moss piglets.

Early genetic research into tardigrades suggested a number of other weird things, including large numbers of genes “borrowed” from bacteria. 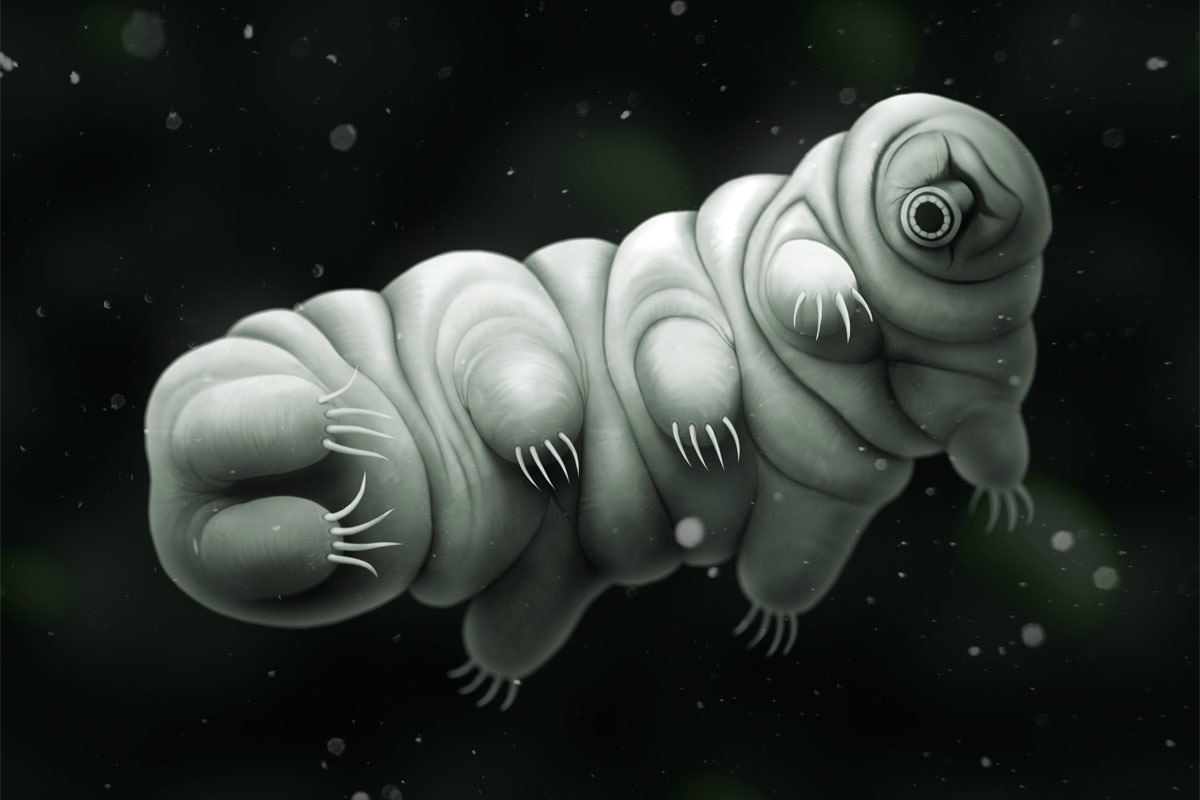 Hypsibius dujardini, one of the species of tardigrade whose genes were analysed by Yuki Yoshida and colleagues
Julio Lacerda

To learn more about these incredible animals, Yuki Yoshida and colleagues performed and published a comprehensive genetic analysis of two tardigrade species, Hypsibius dujardini and Ramazzottius varieornatus, and compared them to the genes in a large number of other animals. Yoshida and colleagues came up with a number of interesting results, including finding that tardigrades are a little more “normal” than previously thought. Tardigrades actually haven’t borrowed bacterial genes. Instead, they found that previous analyses of tardigrade genomes were contaminated by bacteria.

Their research also gave more insight into the genes responsible for the near-invincibility of tardigrades. By monitoring which genes were activated during desiccation, Yoshida and colleagues found out which proteins are made to fill space normally occupied by water, and how that process happens. Additionally, they identified proteins that may help shield DNA from radiation.

Perhaps the most surprising aspect of the researchers’ work deals with where tardigrades fall on the tree of life.

Most people learn that animals can be grouped into vertebrates and invertebrates. The actual story is much more complicated, with vertebrates being but one twig on a complex branching family tree. Among animals, there’s a large and diverse lineage that have bilateral symmetry; that is, they have a right and left side and their bodies have a front and rear end. These bilateral animals include a lot of not-necessarily-related worm-like animals, as well as animals with more complex body plans like insects, crustaceans, molluscs, and vertebrates.

More recent family trees have found that panarthropods are part of a major lineage called Ecdysozoa, all linked by molting their skin. In addition to panarthropods, Ecdysozoa includes several different worm-like groups, some with segments, and some with smooth skin. It may seem intuitive to think that the earliest ecdysozoans were smooth-bodied worms that then went through a segmented worm stage before arriving at the leg-bearing segmented panarthropods.

However, Yoshida and colleagues have determined that the story of ecdysozoan evolution is much more complicated. The earliest lineage to branch off were actually segmented worms. Interestingly, they found that tardigrades, instead of being closest to arthropods, are actually most closely related to nematodes and nematomorphs--the smooth hair-like worms known as round worms and horse-hair worms. 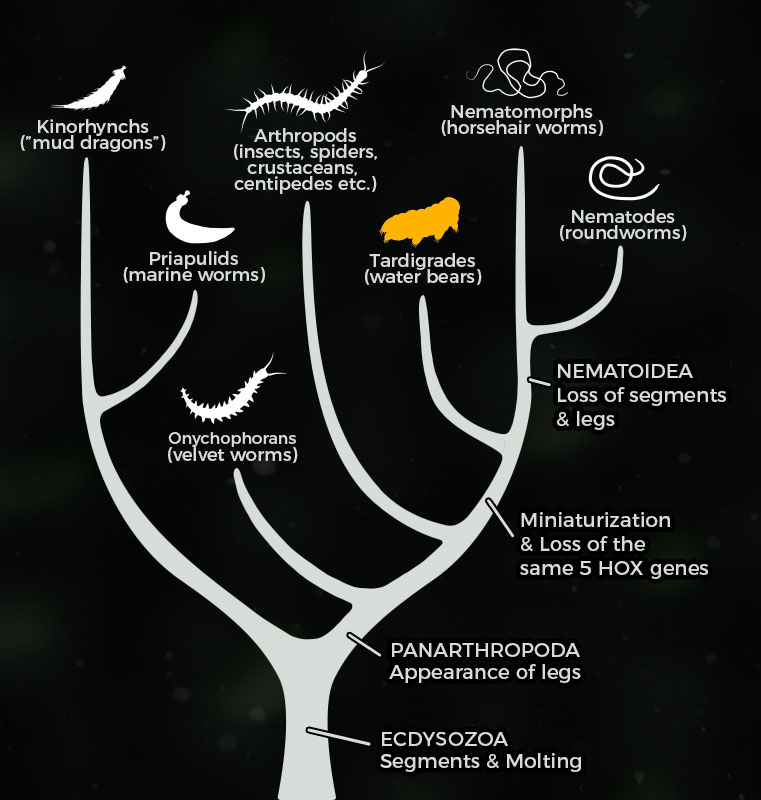 Family tree of the Ecdysozoa, or molting animals, according to Yoshida and colleagues. Interestingly, they found that tardigrades, instead of being closest to arthropods, are actually most closely related to nematodes and nematomorphs. Image by Julio Lacerda.


Although this is a surprising finding, Yoshida and colleagues found it to be very well supported by HOX genes, the genes that regulate development from nose to tail as well as the development of limbs. Most bilateral animals have ten sets of HOX genes, but tardigrades and nematodes have both lost the same five HOX genes, which is strong support for the relationship.

This also allows us to determine that the earliest ecdysozoans were probably segmented and worm-like. From these ancestors emerged a lineage with legs which includes velvet worms, arthropods, tardigrades. This lineage also includes unsegmented and legless round and horse-hair worms, which appear to have evolved from leg-bearing segmented ancestors.

This research, although not the final word on tardigrades, is certainly a great step forward in understanding the genetic mechanisms that make tardigrades incredibly tough, as well the evolutionary history of the ecdysozoans. Speaking of the future, Mark Blaxter, a coauthor with Yoshida, said, “This is just the start -- with the DNA blueprint we can now find out how tardigrades resist extremes and perhaps use their special proteins in biotechnology and medical applications.”