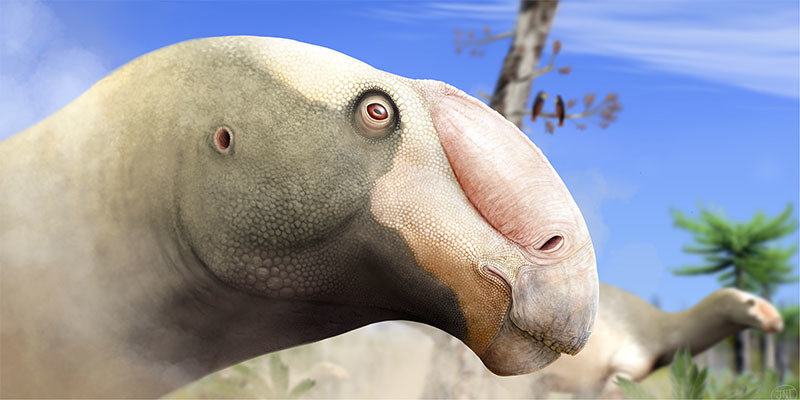 All Posts
Both hump-nosed species were part of a large radiation of chewing plant-eaters. Detailed comparison of the two species shows that their similarities were superficial.

Paleontologists have discovered a new species of herbivorous dinosaur from the desert sands of eastern Mongolia. The new animal, named Choyrodon barsboldi is the second dinosaur from the area with a bulbous nose hump.

The new species is known from partial skeletons of at least three individuals and were discovered in the Choyr Basin. They were found in rocks formed about 105 million years ago when the basin was home to a lake. Surrounding the lake were forested highlands full of conifers.

Both Choyrodon and the other bigger species, Altirhinus kurzanovi, are iguanodonts, large herbivores with spike-shaped thumbs. The research team, led by Terry Gates, thought that the new skeletons might be younger individuals of Altirhinus because of their similar noses. Instead, they found that they were from two different species that looked similar. Choyrodon retained a facial sinus called the antorbital fenestra, while Altirhinus lacks an antorbital fenestra. Looking at adults and juveniles of other iguanodonts, Gates and colleagues found that having or lacking an antorbital fenestra is a feature that doesn’t change as the animals grew up. 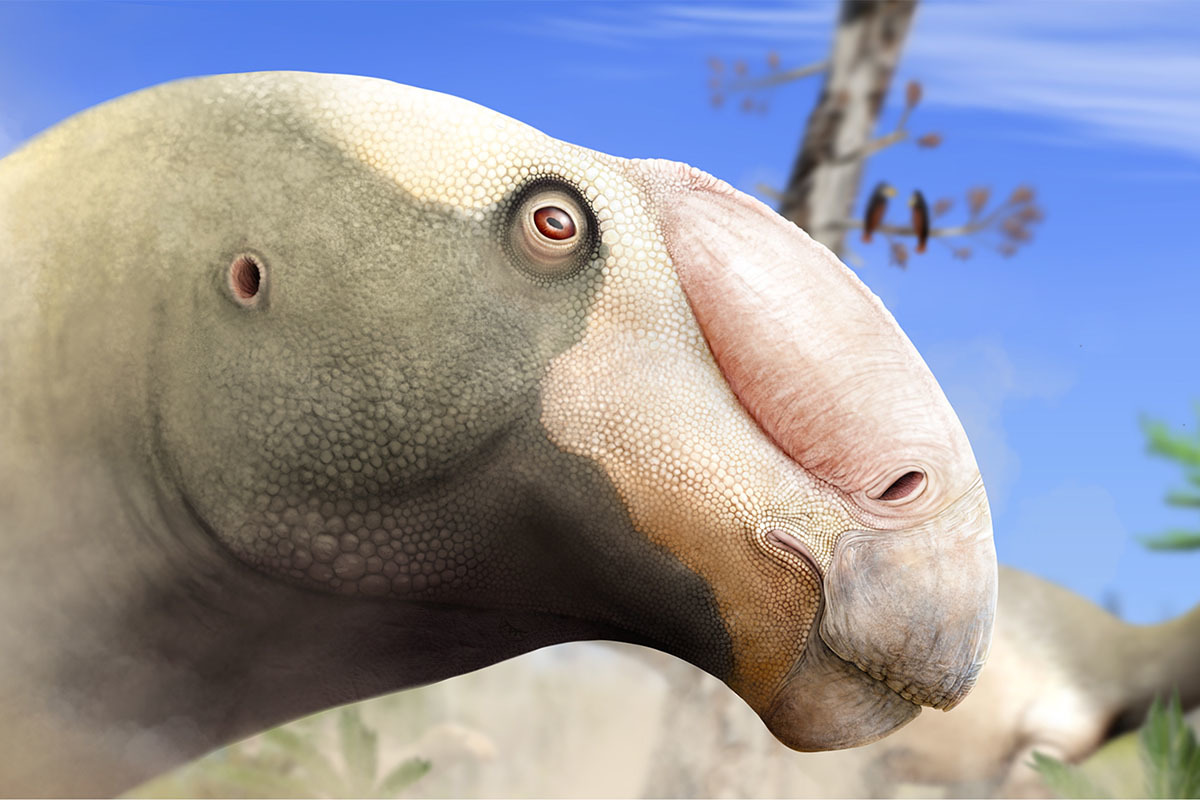 The function of the nose hump isn’t known, but the prominent facial features may have been brightly colored or boldly patterned

The iguanodont lineage first emerged at the end of the Jurassic Period and quickly radiated across the northern continents throughout the Early Cretaceous. They evolved from ancestors called hypsilophodonts which looked like kangaroos or ground birds. They were present in almost all environments throughout the age of dinosaurs but were usually minor players in their ecosystems.

The key to the success of the iguanodonts lies their teeth. In the line leading to the iguanodonts, the gaps between their teeth gradually disappeared, so that the dozens of teeth in each jaw were tightly packed together and worked as a kind of “super-tooth” known as a dental battery. Their dental batteries let them do something that no other reptile could do: chew their food, especially tough plant material.

Iguanodonts were larger than their ancestors, ranging in size from about pony-sized to elephant-sized. Most walked on all fours at least some of the time, holding their spike thumbs clear of the ground. One lineage within the iguanodonts called the hadrosaurs, developed even more efficient dental batteries, and lost their thumbs altogether. The hadrosaurs underwent a second nearly global radiation at the end of the Cretaceous Period, spreading across all the northern continents, as well as South America.

Many iguanodont and hadrosaur species are known from large bone beds, suggesting that they lived in large groups. In the Cretaceous Period, these grazing herbivores filled roles now taken by horses, elk, and bison.

The new species shows that the evolution of the iguanodonts wasn’t a simple line from the hypsilophodonts to the hadrosaurs, but instead a complex branching tree full of unique and wide-ranging lineages. Gates and colleagues found that Choyrodon wasn’t particularly closely related to its look-alike Altirhinus. Instead, it was found to be close kin to Eolambia carolejonesae, known from rocks in Utah formed about 10 million years later.

The rocks where Choyrodon were discovered, the Khuren Dukh Formation, have only a few other dinosaurs known. Its discovery sheds light onto the rare and understudied fauna of Mongolia in the Early Cretaceous. Mongolia’s deserts seem to hold untold numbers of dinosaur skeletons, and there is surely more to come.


Related Stories
A specimen of the dryosaurid Valdosaurus has been discovered on the Isle of Wight
Sail-back dinosaur got flashier with age
Duck-billed dinosaur skeleton from Gobi Desert is “virtually complete”
Machairoceratops, the “bent sword” wielding dinosaur from Utah
Dinosaurs of the North Pole
//sulc.us/v77ra
/articles/second-hump-nosed-spike-thumbed-dinosaur-discovered-in-mongolia/