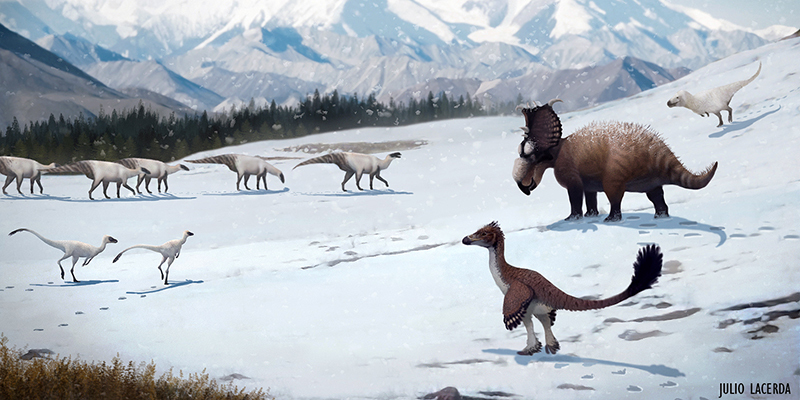 Dinosaurs of the North Pole

All Posts
They were once entombed within frozen soil, lying buried for sixty-nine million years. Only now are we beginning to discover Dinosaur Age Alaska, from its perilous seas with veritable leviathans, to snowy forests ruled by pygmy tyrants. Alaska’s prehistoric past comes to life like never before, and in detail more spectacular than ever imaginable.

Today, Alaska is truly North America's last wild frontier. From its towering mountains, to its jewel-like glaciers and vast expanses of coniferous forest, it feels like a land beyond civilization filled with ghosts of the past. At times, the state is a frigid place but there is still something worthwhile here, a refuge for the continent's most charismatic wildlife. Moose and bears live here, while the seas resonate with the calls of gigantic whales. However, the history of the state is long and convoluted, and also offers a surprise or two every now and then. For one, no one had expected to find any dinosaur remains in the state, especially not a pygmy tyrannosaur half the size of T. rex or a dinosaur carcass chewed on by a massive marine lizard.

This was decidedly a strange dinosaur fauna, made of animals living under the iron grip of the seasons. Even warm-blooded animals felt the chill of winter and either remained active throughout the year, migrated or hibernated. Whatever they did, these creatures were always finding new ways to survive in the harshest of environments. There were herds of hornless horned dinosaurs as well giant versions of smaller animals farther south, all trying to make a living here.

The majority of the Alaskan dinosaurs had, for a long time, been discovered in the vicinity of the Colville River. At the time, dinosaurs were thought to have been cold-blooded and to suggest that they were warm-blooded was rather a heresy. The Colville is located in the De Long Mountains area, in the North Slope, and is a drilling site for petroleum and natural gas. 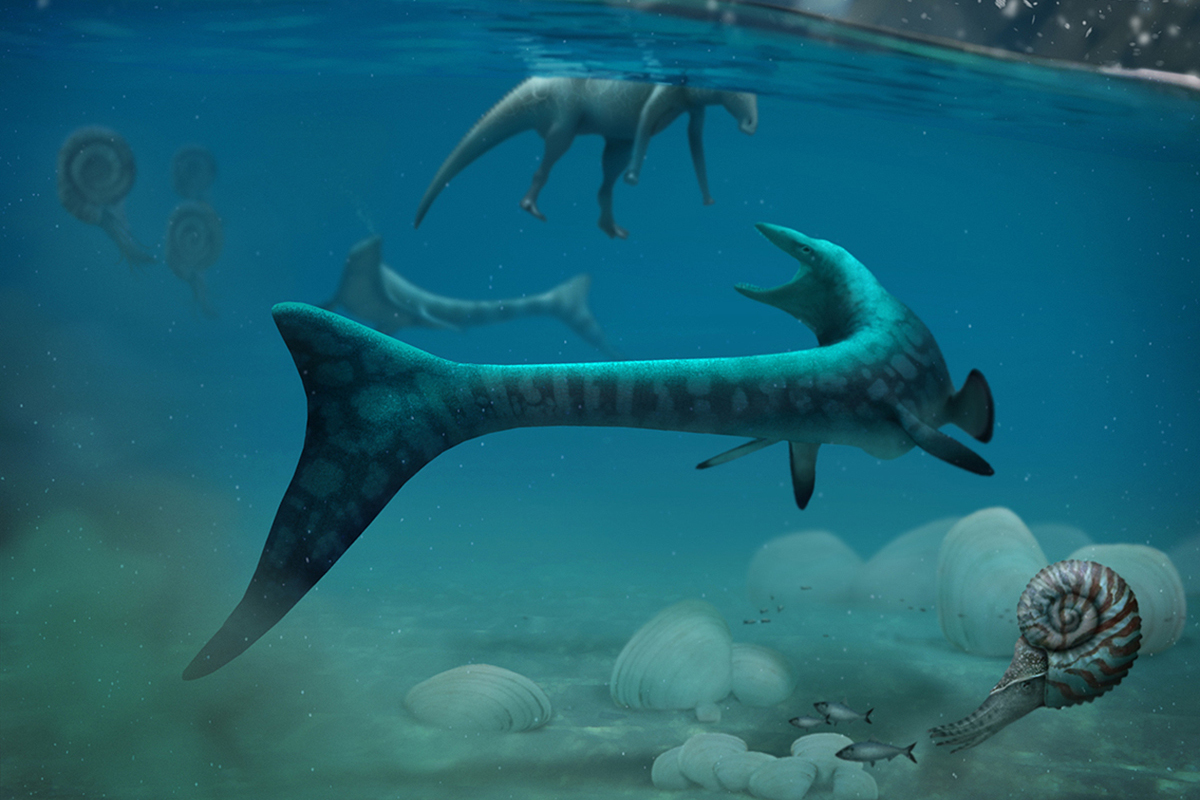 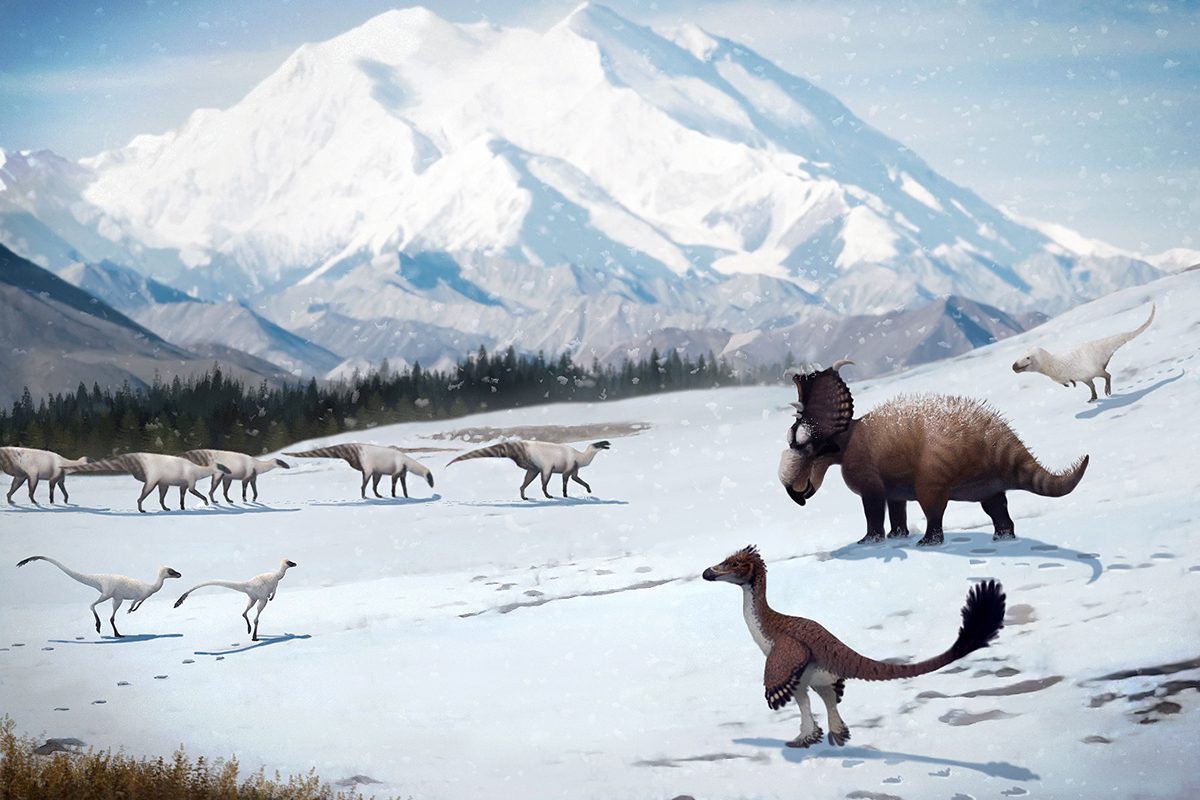 The dinosaurs of the Prince Creek Formation
Dinosaurs were probably warm-blooded animals, but many would have been migratory, moving to warmer areas when the winter came in.
Julio Lacerda 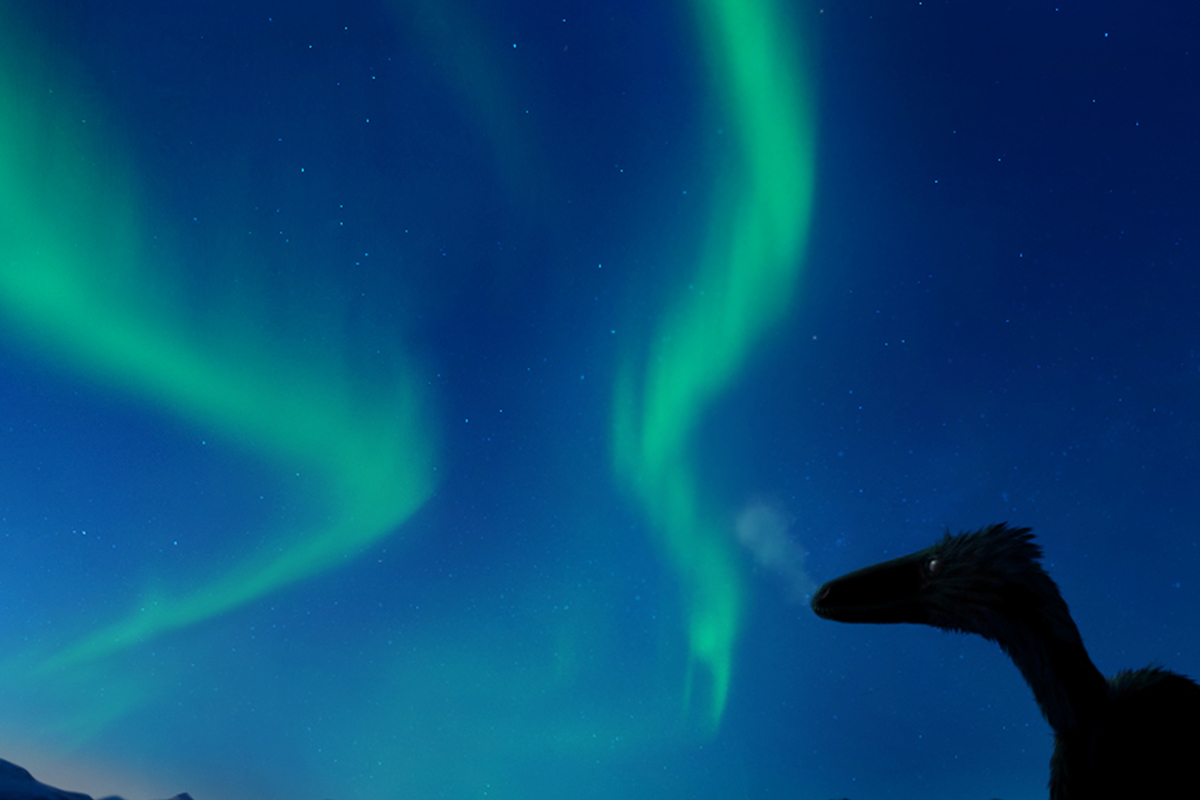 The dinosaur and the aurora
A Troodon experiences the beauty of the Northern Lights on a cold winter night.
Julio Lacerda

This was how the first dinosaur fossils in the state were found, by prospectors for Shell Oil in 1961. One of the first to explore the area was geologist Robert Liscolm, who managed to discover a number of dinosaur fossils even though paleontologists had their doubts about finding dinosaurs so far north.

The fossil beds at the Colville River are now known as the Prince Creek Formation, around 69 million years old. The Prince Creek was actually even farther north then than it is now. It preserves a unique environment never before seen in any other Cretaceous fossil formations.

The Mesozoic is almost always considered a tropical hothouse but in reality it was much more seasonal than once thought. The plants in the Colville area include a wide variety of juniper-like plants, the dawn redwood Metasequoia and a number of other coniferous trees. While the Cretaceous Period is known for the appearance of flowering plants and their dominance, the Prince Creek rocks show conflicting information. The only actual fossils we have are of an aquatic weed, a vine and a single shrub.

Pollen analysis though shows us that there were many other insect-pollinated flowers. Thus, the Arctic summers of the Mesozoic were probably similar to today, with blooms aplenty. Also, for much of the summer and spring, the Prince Creek forests were temperate, and somewhat wet and boggy. This model is similar to a modern coniferous forest. But Alaskan winters still had a good deal of snowfall in winter, despite the lack of ice caps.

The Prince Creek dinosaurs are what remains of a massive taxonomic mess. Many of them have had to be classified as something totally different or are too poorly known to be given a proper name. They were also ruled by the most unlikely animal, the so-called ‘polar bear lizard’, Nanuqsaurus. This was the formation’s only tyrannosaur, a powerful predator by any means, except for one key difference. Its size is almost laughable, and at 6 meters long and just over 2 meters tall, it only reaches the knees of an adult Tyrannosaurus.

It still had the classic tyrannosaur features though, including a muscular body and strong jaws. Nanuqsaurus was very much smaller than its contemporary prey though, and must have tackled the juvenile herbivores. Or it could have worked in packs. A reason for its small size might be the seasonal nature of the area. A larger body requires more nourishment so in a habitat like this, small size might be the right way to go. It could certainly help the predator go through hard winters.

The lower-level predators include the traditional dromaeosaurs, the popular "raptors". Despite their reputation for speed and cunning, these animals were really short-limbed ambush hunters that may have tackled prey around their size or smaller. They are known only from fossilized teeth.

In between them and the tyrannosaurs are the now-famous Alaskan troodontids. These creatures are also known from teeth, but are often restored as being pretty similar to the well-known Troodon formosus.

It was intelligent, perhaps the most intelligent of all non-avian dinosaur and had forward-facing eyes for acute depth perception. For the longest time it was thought to be a weedy predator, a two-meter weakling. In reality a good-sized Troodon would be closer to three meters in length or more, with the Alaskan specimens being the largest. It was very much heavier than most dromaeosaurs, with longer legs and a larger head even though its arms were shorter. In today's world it would be a sizable, even intimidating animal.

The teeth of Troodon however, were more like the serrated teeth of an iguana, and the animal must have been omnivorous. It was probably similar in general size to Nanuqsaurus but much more lightly built, so preying on small to medium-sized animals would probably be its best move.

The herbivores include both animals that have been described scientifically and those that have not been and are too fragmentary to do so. We have fossils of armored dinosaurs, or ankylosaurs, as well as ostrich mimics or ornithomimids. The latter were broadly similar to an actual ostrich in terms of size and habits.

Among those that have been described, the horned dinosaur Pachyrhinosaurus is the best known. It might have been the most common herbivore in the Prince Creek, as bonebeds from farther away show that they were herding animals that actively protected their young. It did not have any horns in reality, instead having a large boss on its nose and spines on its crest. Pachyrhinosaurus was also a very large animal of around eight meters long and weighing four tons, so its size must have made it a dangerous victim for any predator, horns or not. Pachyrhinosaurus also lasted a very long time in comparison to most horned dinosaurs. The majority of them existed in only one area, dying out just as soon as they evolved. But this animal lived for many millions of years, in both Canada and Alaska.

The Prince Creek rocks also show one duckbill dinosaur, or hadrosaur. This was always known just as 'the Alaskan hadrosaur' and no more. Later it was reclassified as a member of the genus Edmontosaurus, one of the best-known and largest hadrosaurs. But it suffered the same fate as many of its contemporaries. The Alaskan hadrosaur is now Ugrunaaluk, a change that occurred as recently as last month. It might not have been very interesting beyond this. It was 9 meters long, moderate for a hadrosaur, and could switch between two-footed and four-footed stances. The dinosaur might have been like just about any other member of its kind, able to eat from tall branches as well as from ground-level vegetation.

Among the first associated skeletons found in Alaska was actually a duckbill. It is still unnamed, and does not hail from Prince Creek. It is instead from the Matanuska Formation, in the Talkeetna Mountains of South-Central Alaska. Discovered in 1996, the animal is known simply as the Talkeetna Mountains Hadrosaur. The animal is headless, and had died young. It was later swept out to sea and scavenged upon by the top predator of the North American continent’s waters. While the usual sharks and other fish had taken a few nibbles, the largest tooth marks come from the gigantic marine monster Tylosaurus.

Tylosaurus is known all over the continent, from Kansas to Canada. It was the top predator of the Western Interior Seaway and was a marine lizard called a mosasaur. It swam using its powerful tail, somewhat like a shark. It was an ambush predator of 15 meters long, and certainly, a dead dinosaur would be a sizable and tempting feast.

Cretaceous Alaska also had a good marine fossil record, preserved within the Matanuska Formation. The formation itself preserves a shallow sea, probably a portion of the Western Interior Seaway that, at the time, split the continent into two halves. We have a rather good idea of the fauna of this formation, with the traditional cold-water invertebrates.

While the seaway is known for its giant fish and marine reptiles, this is also an environment very different from today's shallow waters. For one, corals did not form the reefs here but instead there were gigantic oysters. These are members of the genus Inoceramus. Inoceramus was a common fossil through the sea, and even provided habitats to countless species of encrusting organisms like marine sponges and other shellfish.

Even small fish have been found living between the two shells of these titanic bivalves. These oysters were massive, with the biggest species getting to the size of a small bathtub. Certainly they were very slow-growing and in such cold water, it is not unrealistic to think about very large, slow-growing invertebrates.

Ammonites, those abundant drifting mollusks were around too. These looked somewhat like a nautilus for the most part but most of the Matanuska ammonites were heteromorphs. While most general ammonites had coiled shells, heteromorphs had twisted, corkscrew-shaped ones.