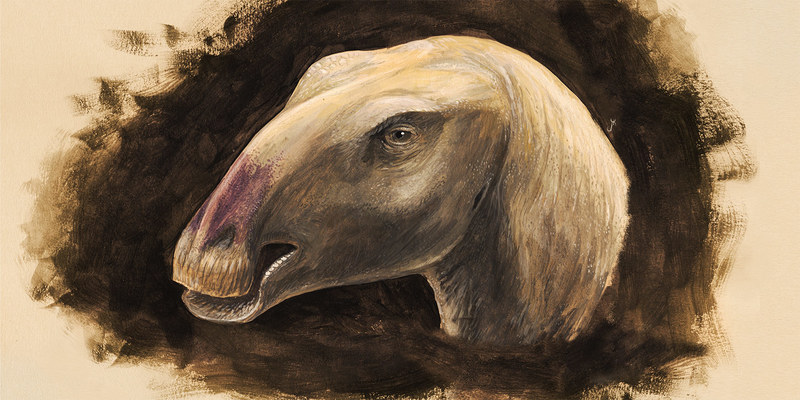 almost 2 years ago by Kristin Hugo

All Posts
The first thing that the expedition team found in peeking from the rocks and sands of the Gobi Desert was a tiny tip of a large pelvis. The international team descended on the exposed fossil, and chipped and brushed away to reveal more and more bones. Eventually, they exposed an exceptionally rare find: the virtually complete skeleton of a new dinosaur species.

The skull of this holotype specimen, Gobihadros mongoliensis, was just slightly warped sideways from pressure and time, but it had all its parts, including teeth. Everything except the skull was attached together as it would have been in life. From the tip of its nose to the end of its tail, the creature measured nearly three meters (10 ft) long, with all of its bones resting neatly in place.

According to Dr. Louis Jacobs, professor of paleontology and president of the Institute for the Study of Earth and Man at Southern Methodist University, it’s “pretty rare” to find a complete dinosaur. “But one of the places where you find them reasonably complete, reasonably commonly, is in the Gobi,” he said. Jacobs has worked with fossils from the Gobi Desert before, but was not involved with the discovery or description of Gobihadros.

The sands and rocks of the Gobi Desert, where Jacobs has studied dinosaurs, are famously teeming with fossil dinosaurs and early mammals. The iconic Velociraptor mongoliensis and the bizarre, humpback Deinocheirus called the arid Mongolian landscape home. Paleontologists discovered the first example of a dinosaur protecting her eggs when they found the fossil of an Oviraptor on her clutch in the Gobi desert.

The weather patterns of Late Cretaceous Mongolia could be responsible for the richness of fossil evidence left in the Gobi desert. Scientists think that rain storms could have toppled sand dunes, or sudden floods can wash away animals and cover them in sediment, protecting them from scavengers and the elements of the weather.

Still, what we know from most dinosaurs simply comes from partial, incomplete sets of bones, or even simply a single tooth. When ancient animals died, the vast majority of them left no remains whatsoever – more than 99% of all bodies never leave a trace. Usually, predators will find a carcass and eat the flesh, breaking and scattering the bones. Wind, water, sun, insects, chemicals and bacteria can break down the bones, so they wear away into tiny, useless fragments. Even if something useful is left, it’s unlikely that anyone would find it. It could be nearly anywhere in the world, including at the bottom of the ocean.

It’s a shame, because there is a lot of information about an animal that is lost when the bones become scattered and damaged. “If you just have various bones from various places and you’re putting them together, you may have it correct, they may all belong to the same animal,” Jacobs explained. But there are too many variables and you may end up with the wrong interpretation of the fossils.

Luckily, this Gobihadros skeleton was virtually in the same shape as the day the animal died, but now mineralized. When you find all the bones together, Jacobs said, “you know that that individual is representative of the species that it belongs to.” You also know that the size is accurate and how the joints fit together.

A description of Gobihadros Mongoliensis, including the virtually complete skeleton as well as another skull, was published today in the journal PLOS One. With this new fossil, paleontologists are advancing our understanding of the evolutionary history of Mongolian dinosaurs. By comparing the anatomy of Gobihadros to later Asian hadrosaurs, paleontologists determined that Gobihadros was not their ancestor. Instead, it’s more likely that the later hadrosaurs of Asia were descended from North American animals that had migrated, competing with and ultimately wiping out the native Asian Gobihadros relatives.

All this information was contained within just about three meters of rock out in the desolate landscape of the Gobi Desert.