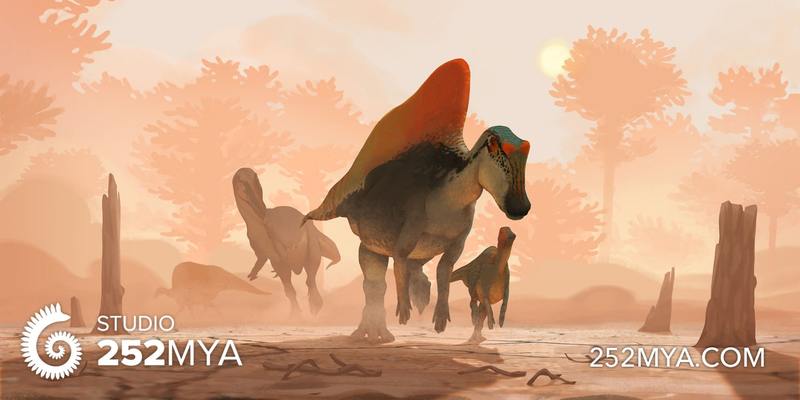 Sail-back dinosaur got flashier with age

All Posts
Detailed examination of this cousin of Iguanodon shows that its big sail evolved to show off to mates and rivals.

In 1964 French geologists prospecting for uranium ore found some fossil bones in a valley called Gadoufaoua, in central Niger. Young paleontologist Philippe Taquet was sent to investigate what they had found, and much to his amazement, had been transported to one of the world's most incredible fossil graveyards. In a narrow, rocky valley surrounded by seas of sand, dozens of fossil dinosaur skeletons were lying on the surface, partially exposed, and partially entombed within the Earth.

The first skeleton discovered was the original specimen of the sail-backed dinosaur Ouranosaurus. The second was the first skeleton of the rotund semi-aquatic Lurdusaurus. Both are iguanodonts, cousin of the better known Iguanodon.

Over many years, Taquet and other paleontologists collected several skeletons of dinosaurs, crocodilians, turtles, and fish from Gadoufaoua, including two skeletons of Ouranosaurus. The original specimen of Ouranosaurus was studied in Paris but ultimately returned to the Nigerien capital Niamey. The second specimen, discovered in 1972, was never fully studied and has been on display in at the Museo di Storia Naturale in Venice since 1975. 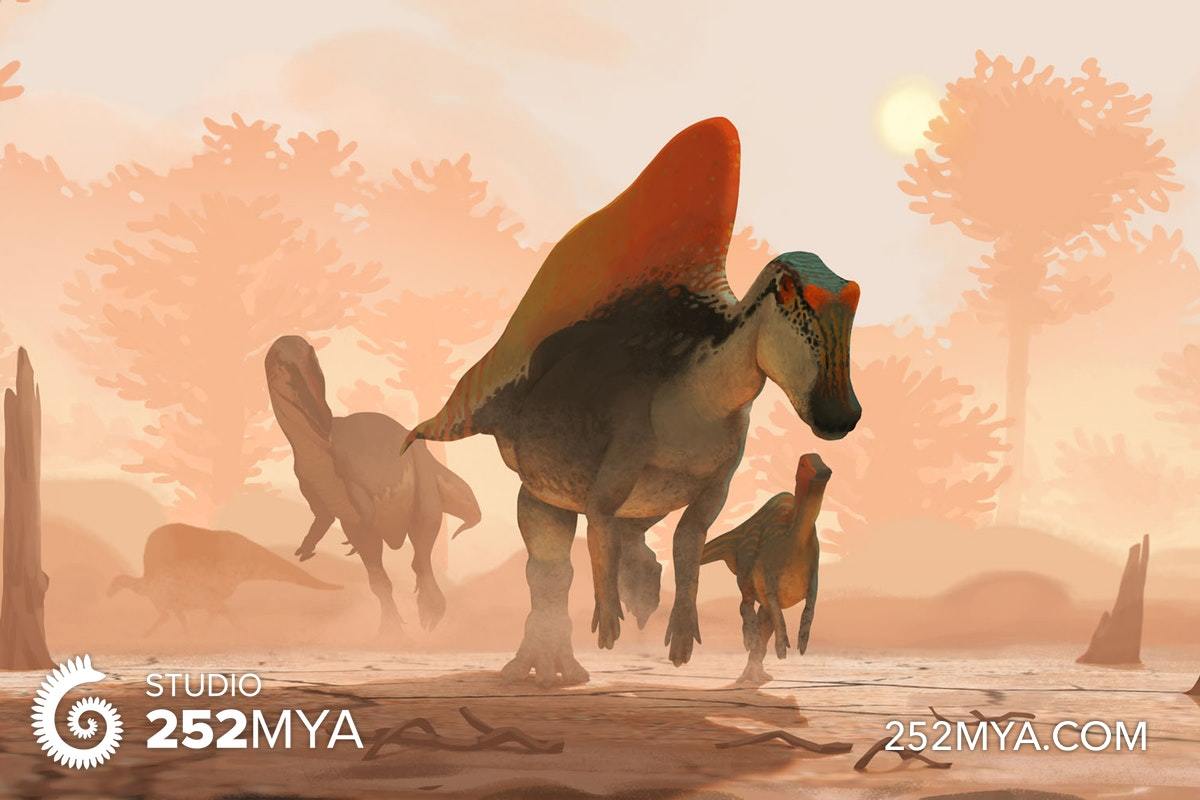 Ouranosaurus nigeriensis
This cousin of Iguanodon's lived in what is now Niger in the Early Cretaceous. Its sail started growing as it reached maturity and likely helped it attract mates.
Antonin Jury 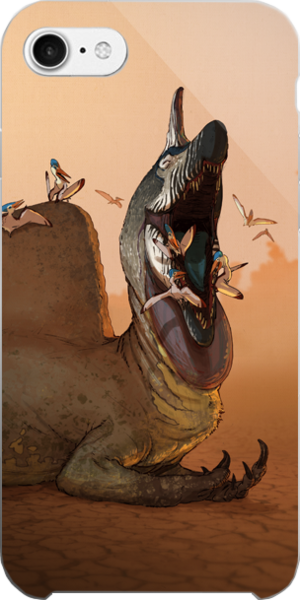 Get Antonin's artwork as a print or merchandise from 252MYA.com
Credit: Antonin Jury / Studio 252MYA

In June 2017, a trio of Italian scientists published a study examining the Venice specimen. The team, including Filippo Bertozzo, Fabio Marco Dalla Vecchia, and Matteo Fabbri, has provided the first new information on the species since the 1970s. They compared the anatomy of this skeleton to the original specimen, determined the age and rate of growth of the Venice specimen, and uncovered important new information about what makes Ouranosaurus unique.

Speaking to Earth Archives, lead author Filippo Bertozzo said, "It was, and probably still is, one of the most famous ornithopods, because of its sail-back, and also because of the stories surrounding its discoveries. However, we did not hear anything about this species for about 40 years. In our paper, we cover different topics about it, from the history of the discoveries to the comparison with the only known material described so far. All topics are related to each other, and altogether they offer a modern depiction of this species."

A major result of the research was finding out the age of the individual at death. To figure this out, Bertozzo and colleagues examined cross sections of several bones under the microscope. Bones grow at different rates at different times of the year, forming thin layers of very dense bone during lean times and thick layers of less dense bone during times of plenty. The dense bone layers, known as lines of arrested growth (LAGs), are normally formed once a year and — just like tree rings — can be used to discover the age of the animal. They found by counting LAGs that the Venice specimen grew fast and was about seven years old at death, but not yet fully grown at 6.5 meters (21 feet) long.

The tall neural spines of the vertebrae revealed another secret about Ouranosaurus. Bertozzo and colleagues examined cross sections near the base of the spine, in the middle, and toward the end. They counted six LAGs at the base of the spine, four LAGs in the middle, and only three LAGs near the end. This shows that when young, Ouranosaurus had a more conventional look, but started growing the sail at about age three. "Juveniles of Ouranosaurus nigeriensis probably had shorter dorsal neural spines than the full growth adult. During ontogeny, then, the height might have increased dramatically, reaching the adult ratio," said Bertozzo.

Several different hypotheses have been proposed for the function of the sail in Ouranosaurus and other sail-backed vertebrates like the theropod dinosaur Spinosaurus, and the early mammal relatives Dimetrodon and Edaphosaurus. They include increased area for muscle attachment, regulating body temperature, supporting a fatty hump, and display as a sort of natural billboard. In Ouranosaurus, Bertozzo and colleagues found no signs that muscles attached to the spines anywhere but the base. Additionally, there were none of the blood vessel features expected for regulating body temperature.

They couldn't discount the idea that Ouranosaurus had a hump, but found the idea that the sail was used to display to other members of the species the most likely explanation for its function. In living animals, big and flashy display structures are used both to intimidate rivals and attract mates.  As far as Ouranosaurus was concerned, the sail may have been the sexiest part of its body.

"The only paper regarding [tall spines]. . . supported a thermoregulatory role," said Bertozzo. "However, in O. nigeriensis the low density of vascularization in the spines does not support this hypothesis. Although difficult to test, I think that as well as for other odd structures found in different clades (lineages) of Dinosauria, the sail had a social/display role. Mating, territory, intraspecific recognition, all of these are biological input that might have lead to the evolution of the sail-back of Ouranosaurus."

Ouranosaurus was related to Iguanodon, found in rocks of similar age in northern Europe. They are both beaked herbivores with complex teeth and the ability to walk on both two and four limbs. The hands bore a spike on the thumb, and the three central finger carried weight when on all fours. Other than the sail, which stretched from the shoulders to the tip of the tail, the team found that Ouranosaurus had a number of unique features. Unlike Iguanodon, the skull was long with a wide duck-like bill. There were also two dome-shaped bumps on skull roof right before the eyes. Additionally, Bertozzo and colleagues found that Ouranosaurus had unusually small hands, much smaller than what's seen in Iguanodon.

Although Ouranosaurus was discovered in the sands of the Sahara Desert, it actually lived in a lush tropical forest crossed by a number of rivers. Unlike modern tropical forests, the plant life was dominated by conifers and ferns rather than flowering plants. "Ouranosaurus shared its environment with its cousins Lurdusaurus arenatus and Elrhazosaurus nigeriensis, and saurischians like the diplodocoid Nigersaurus taqueti, and the theropods Kryptops palaios, Eocarcharia dinops, and Suchomimus tenerensis," said Bertozzo. The rivers were patrolled by several crocodilians including the giant Sarcosuchus.

The wide, duck-like bill suggests that Ouranosaurus was a grazer and was not particularly picky about what plants it ate. The wide bill is quite similar to another group of dinosaurs, the hadrosaurs, popularly known as duck-bills. Hadrosaurs lived in the Late Cretaceous and are closely related to Iguanodon and Ouranosaurus, but Ouranosaurus and the hadrosaurs evolved their wide bills independently, an example of convergent evolution.

Even though this specimen of Ouranosaurus was discovered and put on display over 40 years ago, its secrets are just now being uncovered. New information on the rate of growth, as well as the development and function of the sail give us new insight into this incredible dinosaur. Bertozzo began this project as a component of his undergraduate research. Speaking of the future, he said, "It would be amazing to go to Gadoufaoua to collect more material, seeking especially for juvenile material. Also, it would be great to re-analyse the holotype in Niamey. However, it is very difficult because of the difficult political situation of Niger."

Paleontologists have only scratched the surface of the dinosaur graveyard at Gadoufaoua, and many exciting discoveries await, including unlocking more secrets about the life of Ouranosaurus. It remains to be seen just how sexy Ouranosaurus really was; Bertozzo concluded, "Much more can be said only with new material of this species, especially juvenile and senile skeletons."