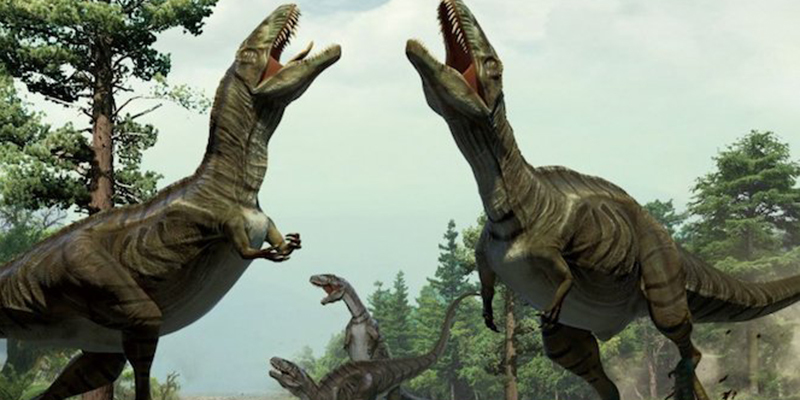 Dance of the dinosaurs

All Posts
Many species of birds today exhibit elaborate displays for attracting mates. We now have evidence that at least some of their long-dead relatives did the same.

If you watch a pair of albatrosses bobbing heads, two cranes looking skyward in synchrony or a bird-of-paradise showing off to a female, it’s hard to call those behaviors anything but dancing. And it seems that bird ancestors were doing these elaborate courtships a long, long time ago.

A set of fossilized footprints found in Colorado appears to be the first evidence of non-avian mating rituals. The tracks, dated to 100 million years ago and attributed to large theropod dinosaurs, show that the animals scraped and stomped the ground while remaining in the same spot – a behavior widely observed in dancing birds today.

One big dinosaur found in the region may have been the culprit: Acrocanthosaurus atokensis, an apex predator that weighed up to almost 7 tons. The size and shape of the footprints fit this species, as well as the time they’ve been dated to and the location they were found. Given the size of these theropods, the results of such exuberant dances must have been heard for miles.

Other interpretations have been thought out to explain the trackways, such as digging for food or water, or to build a nest. The researches involved in the discovery however are confident that the finding is the result of a mating dance, very similar to what ostriches, ground parrots or shorebirds do.

They state that during the Cretaceous, the region where the tracks were found was a lush environment, deeming it unnecessary to dig for water. The lack of any remains of carcasses, eggs or nests also seem to rule out those possibilities.

On the other hand, the similarity of the fossilized scrape marks match closely to what is observed today being left behind by a wide variety of birds. All in all, the markings – which were found in four different sites across Colorado, each with up to 60 trackways – seem to suggest something similar to the ceremonies practiced by the sand grouse, in which several males would gather and try to woo passing females with their dance moves.

If the interpreted behavior is true, it is very likely that many other species of dinosaurs practiced similar rituals, since Acrocanthosaurus itself isn’t very closely related to the lineage that gave rise to birds. It seems that along with feathers, wishbones and nesting behavior, mating dances are just one of many things that we though were unique to birds but are actually around for much longer.


Related Stories
Dinosaur Romeo and Juliet: the fossilized lovers that died together
Dinosaurs of the North Pole
Kosmoceratops was the frilliest of all the ceratopsians
Tiny bonehead skull uncovers the early life of Pachycephalosaurus
T. rex immigrated from Asia
//sulc.us/oqrgn
/articles/dinosaurs-danced-in-bird-like-mating-rituals/