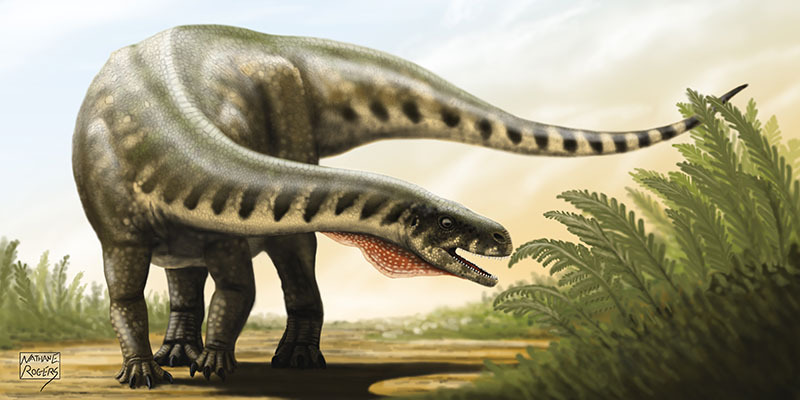 All Posts
An early relative of long-necked dinosaurs like Brontosaurus from South Africa has now been described. Pulanesaura is helping paleontologists rewrite the early history of sauropods.

Wits PhD student Blair McPhee has described a new species of dinosaur in a paper to be published in Scientific Reports on 19 September 2015. The new dinosaur, named Pulanesaura eocollum, means the “Rain lizard”.

According to the authors of the paper -  McPhee, Dr Matthew Bonnan (Stockton University), Dr Jonah Choiniere (Evolutionary Studies Institute at Wits), Dr Adam Yates (Scientist at the Museum of Central Australia) and Dr Johann Neveling (Geologist from the Council of Geoscience, SA), Pulanesaura was an early member of the long-necked sauropod lineage of dinosaurs, famously represented by Brontosaurus.

Eating habits
The researchers says that the specialised teeth, vertebrae, and forelimb of Pulanesaura was an indication that the new species would have spent all of its time on all fours, browsing lower vegetation. This novel feeding strategy would have resulted in a more energetically conservative feeding posture for Pulanesaura.

This is unlike more primitive prosauropod (scientifically referred to as “basal sauropodomorph”) dinosaurs, which still relied on the forelimb to aid in gathering food from across a broad range of the forest canopy.

Early sauropods like Pulanesaura are incredibly rare in the fossil record, with only a handful of good sauropod specimens known from the Early Jurassic, a time period between 200 and 180 million years ago, when Pulanesaura would have lived.

Much more common at that time in South Africa were bipedal or semi-bipedal sauropodomorph dinosaurs likeMassospondylus and Antetonitrus. This might have been because the unique feeding strategy of Pulanesaura restricted the number of lower-browsing dinosaurs that the early Jurassic landscape could have supported.

“This dinosaur showcases the unexpected diversity of locomotion and feeding strategies present in South Africa 200 million years ago. This has serious implications for how dinosaurs were carving up their ecosystems,” says McPhee.

“We used to think that only two species of sauropodomorph dinosaur were present in South Africa. Now we know that the picture was much more complicated, with lots of species present. But Pulanesaura is still special because it was doing something that all these newly discovered species weren’t,” says Choiniere.

History of the name
The fossils of Pulanesaura were found at Heelbo, a farm in the Eastern Free State where two other recently described South African dinosaur species also come from – Aardonyx and Arcusaurus, both more primitive members of the same lineage.

The late Naude Bremer, former owner of Heelbo, was a strong proponent of palaeontology on his farm.  “Pulane” was the childhood Sesotho nickname of Bremer’s daughter, Panie.

Roughly translated, “Pulane” means “comes with rain,” and Pulanesaura was excavated during a particularly rainy period on the property.

Yates, who excavated the fossil, believes that Heelbo Farm was different from the rest of South Africa 200 million years ago when Pulanesaura was alive.

“The dinosaur fossils we see at Heelbo are different from the typical South African Early Jurassic species and they might have been living in a rare habitat different than the drier ones favoured by famous species like Massospondylus,” he says.

Neveling says what makes Heelbo unique is the fact that unlike the majority of localities of this age which represent dry flood plains, its geology is characterised by a dense concentration of river channel deposits.

“Similar to modern arid environments, the river banks would have supported much denser vegetation that would have provided plenty of food to budding giants,” Neveling adds.

Reprinted from material provided by University of Witwatersrand.


Related Stories
Grandfather of Brontosaurus found in South Africa
Meet Yi qi, the dinosaur with bat-like wings and feathers
Ancient Chinese plant-eater was half neck, half body
Walking in the footsteps of dinosaurs
Dwarf dinosaurs died out amid blitzkrieg of carnivores
//sulc.us/09nr0
/articles/rain-lizard-dinosaur-from-south-africa-helps-fill-in-brontosaurus-family-history/