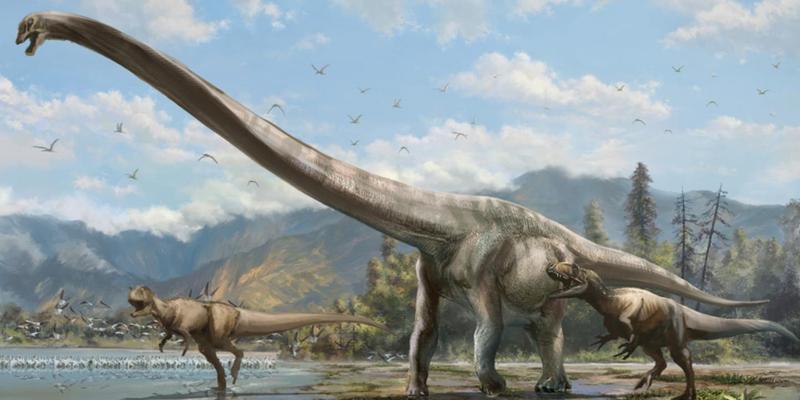 Ancient Chinese plant-eater was half neck, half body

about 6 years ago by Pete Buchholz

All Posts
Measuring almost nine meters (30 feet), Qijianglong's neck was about half the animal's total length.

Sauropods, the giant long-necked plant-eating dinosaurs, were present in nearly every environment throughout the Jurassic and Cretaceous periods all over the world. Dozens of species of sauropods are known, showing a great diversity in body size, proportions, and feeding strategies.

In 2015, Lida Xing and colleagues announced the discovery of a new sauropod dinosaur, Qijianglong guokr, from Upper Jurassic rocks in the Qijiang District of the Chongqing Municipality, China. The Suining Formation was deposited about 150 million years ago from a forested environment crossed by numerous rivers and dotted by lakes. The fossils of Qijianglong were first discovered by a local farmer in the 1990s, and excavated in 2006.

The specimen is made up of portions of the skull, most of the enormous neck, vertebrae from the the back and tail, and a bone from the hips. The neck is noteworthy because it is incredibly long, nearly 9 meters (30 feet), making up about half the total length of the animal. Qijianglong was found to be a mamenchisaurid, a family of sauropods only found in Jurassic age rocks from China. All mamenchisaurids had extremely long necks which they used to reach leaves high in the tree tops. Mamenchisaurids were the most common sauropods in China during the Jurassic, but became extinct by the Cretaceous period, being replaced by titanosaurs.

Qijianglong shows that the Jurassic age localities in southern China are still productive, despite already producing hundreds of fossil specimens. Xing and colleagues note that there are many named mamenchisaurids from numerous sites, but they haven't yet been examined and described as a whole. The researchers stated that a reexamination of all mamenchisaurids is underway, possibly revealing even greater diversity in Jurassic Chinese sauropods.