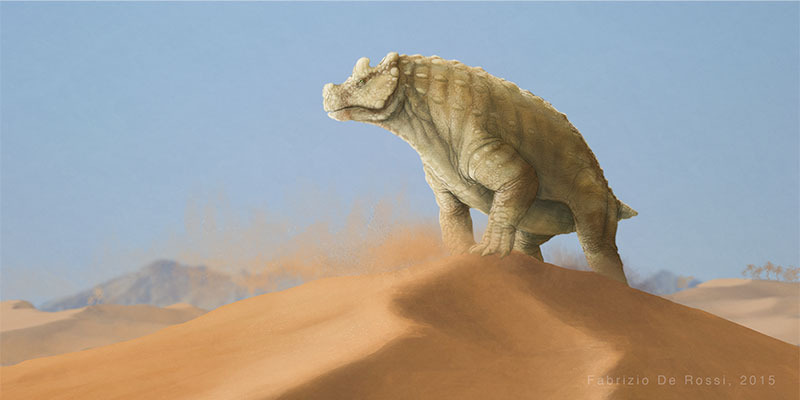 Animal may be earliest known to walk upright on all fours

All Posts
Wandering an arid region of the ancient supercontinent of Pangea about 260 million years ago, the pre-reptile Bunostegos akokanensis is the oldest known creature to have walked upright on all fours, according to a newly published study.

A newly published analysis of the bones of Bunostegos akokanensis, a 260-million-year-old pre-reptile, finds that it likely stood upright on all fours like a cow or a hippo, making it the earliest known creature to do so.

To date all of the known pareiasaurs who roved the supercontinent of Pangea in the Permian Period a quarter of a billion years ago were sprawlers whose limbs would jut out from the side of the body and then continue out or slant down from the elbow (like some modern lizards). Morgan Turner, lead author of the study in the Journal of Vertebrate Paleontology, expected Bunostegos would be a sprawler, too, but the bones of the animal’s forelimbs tell a different story.

“A lot of the animals that lived around the time had a similar upright or semi-upright hind limb posture, but what’s interesting and special about Bunostegos is the forelimb, in that its anatomy is sprawling — precluding and seemingly directed underneath its body — unlike anything else at the time,” said Turner who performed the analysis under the supervision of Christian Sidor while a student at the University of Washington. Now Turner is a graduate student at Brown University. “The elements and features within the forelimb bones won’t allow a sprawling posture. That is unique.” 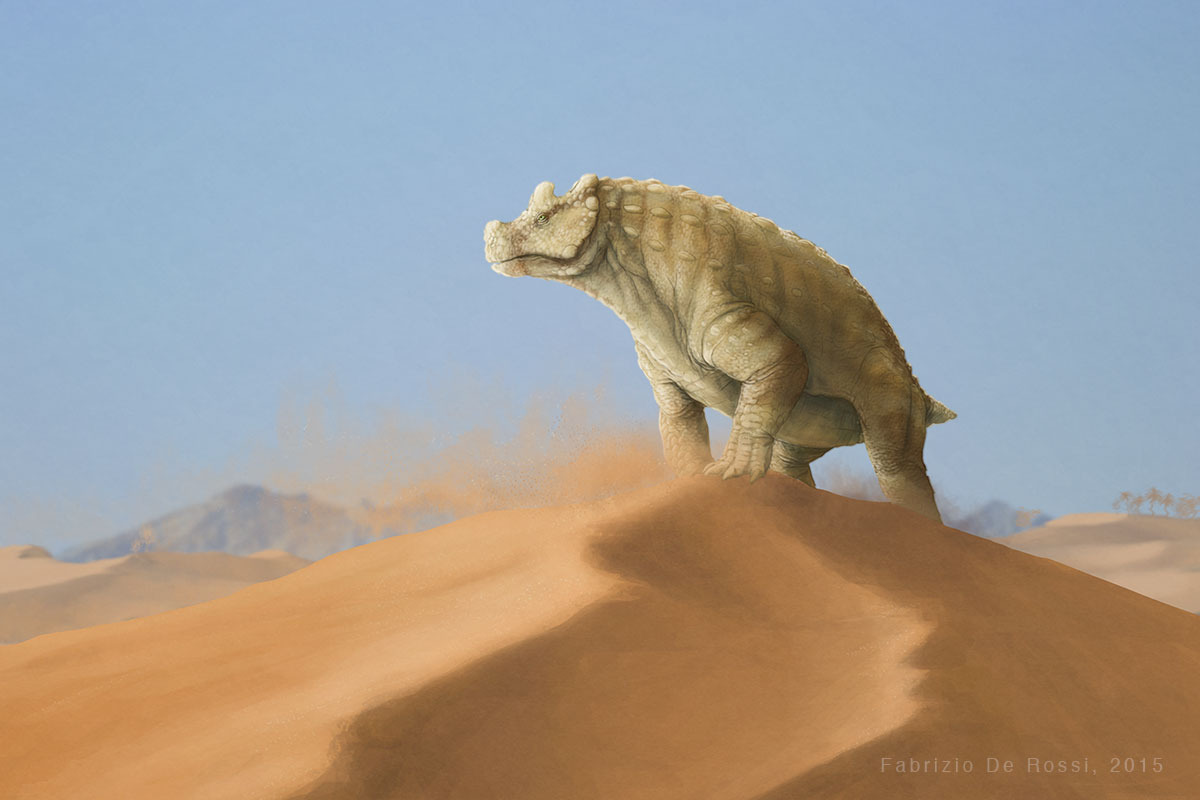 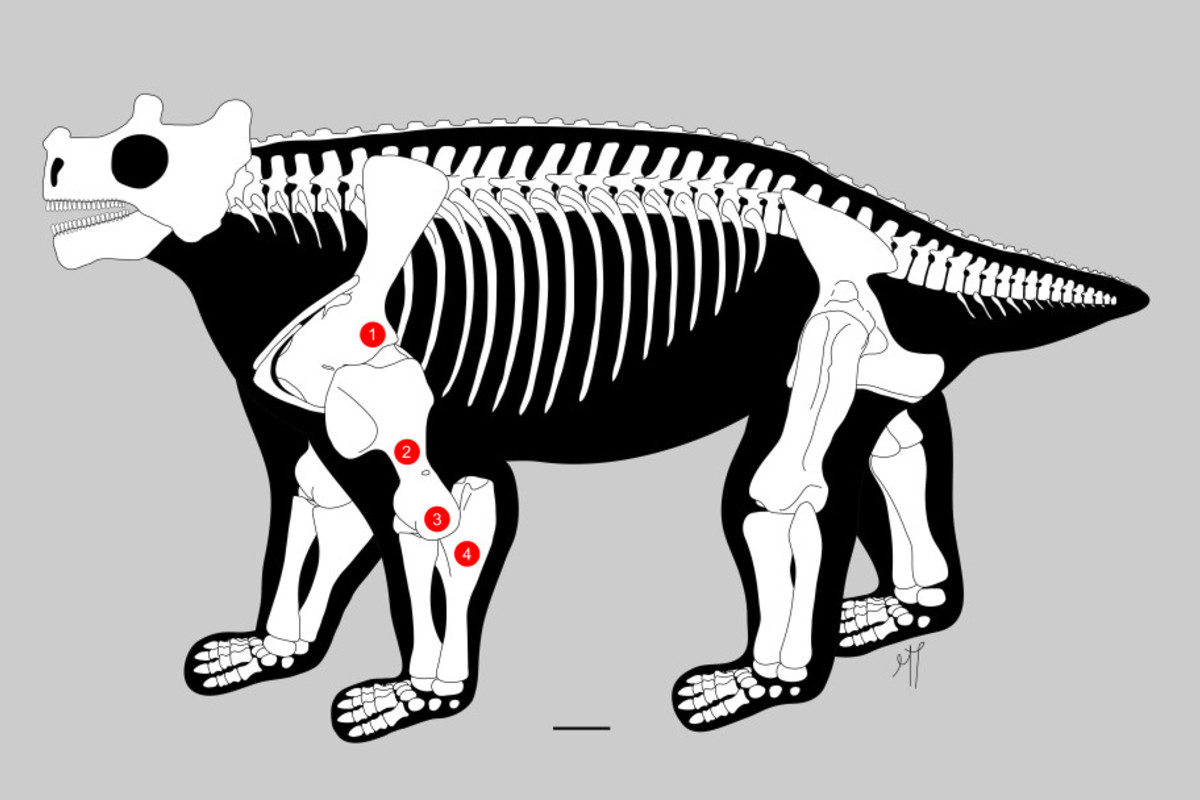 Bunostegos Skeleton
The shoulder joint (1), humerus (2), knee-like elbow hinge (3), and a longer ulna (4) together make the case that Bunostegos stood with its legs under its body.
Brown University

The findings allowed Turner, Sidor, and her co-authors to characterize how Bunostegos might have looked, standing like a cow and about the same size.

“Imagine a cow-sized, plant-eating reptile with a knobby skull and bony armor down its back,” said co-author Linda Tsuji of the Royal Ontario Museum, who discovered the fossils in Niger with Sidor and a team of paleontologists in 2003 and 2006.

Turner examined much of the skeletons of several individuals. The findings that matter most, however, are all in the forelimbs. In particular, four observations make the case, she said, that Bunostegos stood differently than all the rest, with the legs entirely beneath the body.

The shoulder joint — the glenoid fossa — is facing down such that the humerus (the bone running from shoulder to elbow) would be vertically oriented underneath. It would restrict the humerus from sticking out to the side.

Meanwhile Bunostegos’ humerus is not twisted like those of sprawlers. In a sprawler, the twist is what could allow the humerus to jut out to the side at the shoulder and then orient the forearm downward from the elbow. But the humerus of Bunostegos has no twist, suggesting that the foot could actually reach the ground only if the elbow and shoulders were aligned under the body, Turner said.

The elbow joint is also telling. Unlike in sprawling pareiasaurs, which had considerable mobility at the elbow, the movement of Bunostegos’s elbow is more limited. The way the radius and ulna (forearm bones) join with the humerus forms a hinge-like joint, and wouldn’t allow for the forearm to swing out to the sides. Instead, it would only swing in a back and forth direction like a human knee.

Finally, the ulna is longer than the humerus in Bunostegos, which is a common trait among non-sprawlers. “Many other sprawling four-legged animals have the reverse ratio,” Turner said.

Way back when, Niger was an arid place (like some of it is today) where plants and water sources might well have been few and far between. Scientists have associated walking upright on all fours with a more energy-efficient posture than sprawling. For the long journeys between meals, Turner said, the upright posture might have been necessary for survival.

The significance of such an early example of the upright posture is that Bunostegos dates very far back on the evolutionary tree, pushing back the clock on when this posture shows up in evolution.

But Turner said she wouldn’t be surprised if other animals of the time are eventually also found to have similarities to this posture, which evolved independently in reptiles and mammals several times over the eras.

“Posture, from sprawling to upright, is not black or white, but instead is a gradient of forms,” Turner said. “There are many complexities about the evolution of posture and locomotion we are working to better understand every day. The anatomy of Bunostegos is unexpected, illuminating, and tells us we still have much to learn.”

At Brown, Turner is working in the lab of Stephen Gatesy, where she is studying a continuum of postures and locomotion in ancient creatures. In addition to Turner, Tsuji and Sidor, Oumarou Ide of the University of Niamey in Niger is an author of the study.

This article is based on material provided by Brown University.