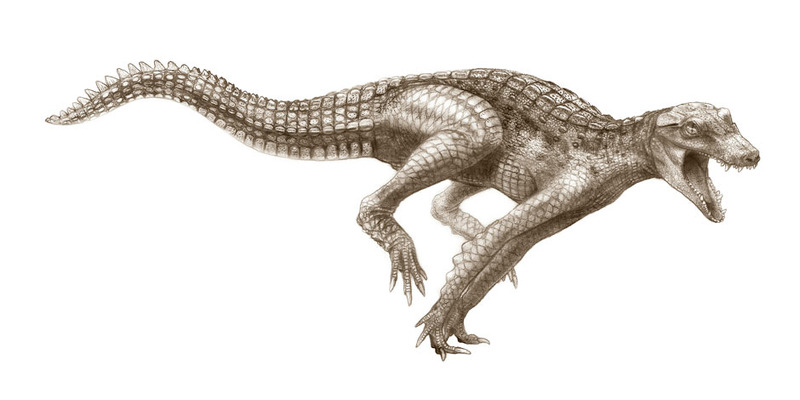 Modern-day northern Africa is mostly covered by the Sahara desert, the largest hot desert in the world. But around 100 million years ago, what is now scorching dunes was a lush swampland. In this swamp lived not only incredible dinosaurs, like the famous sail-backed Spinosaurus, but also a suite of strange crocodilians.

In 2009, a paleontological expedition funded by National Geographic uncovered the remains of five bizarre crocodile relatives. Nicknamed BoarCroc, DuckCroc, RatCroc, DogCroc and PancakeCroc, they show us the great diversity of life that inhabited what is now Niger and Morocco.

Kaprosuchus, the BoarCroc, displayed three pairs of huge teeth akin to a boar’s tusks. These teeth were so big that the skull has notches on both the upper and lower jaws, allowing the tusks to pass through when the croc’s mouth was closed. The eye sockets were set lower than in modern crocodiles, which have eyes on top of their head to look around the surface while submerged. Kaprosuchus also had more forward-facing eyes, giving it better depth perception. This suggests it was a more terrestrially-adapted animal, preying on smaller creatures along the margins of the swamp.

Araripesuchus was a small, resourceful animal. Several different species of this little crocodile have been found from South America to Madagascar, including North Africa. Together, they display a variety of features indicating that Araripesuchus was a skillful opportunist, able to exploit many ecological niches. Araripesuchus rattoides, for example, had a pair of buck teeth on its lower jaw that may have been used to dig for food like grubs and roots, earning the nickname RatCroc.

Another species, Araripesuchus wegeneri, seems to have been a very agile runner with mammal-like teeth and a snout reminiscent of a dog’s, leading to the nickname DogCroc. Both the RatCroc and DogCroc are thought to have been omnivores, eating plants and small animals alike. They lived mostly on land, though they were probably able to swim across the rivers and lakes of their habitats.

The 20-foot-long Laganosuchus has been dubbed PancakeCroc due to its flat, wide jaws. It had small but very numerous teeth lining these jaws, and probably used them to set a trap for its prey. Lying motionless for hours underwater with its mouth wide open, Laganosuchus would wait for a fish to pass by and then snap its mouth shut, much like the reptilian version of a carnivorous plant.

Finally Anatosuchus, with its duck-like snout, has been nicknamed the DuckCroc. This 3-foot-long terrestrial crocodile had a very broad face with a pointy nose at the end. While the jaws were lined with sensory areas to find hidden prey underwater, the protuberance at the end could have helped to dig them up from the mud. It is also thought to have been a mostly terrestrial animal that moved much like a mammal, but stuck to the shores of rivers and lakes to hunt like a heron.

Most of these weird crocodiles lived and behaved very differently from their modern relatives. They were more agile, active and possibly smarter than today’s alligators, which need less brain power for their more passive hunting strategy. However, more typical crocs also inhabited this ancient paradise, although they could grow to much bigger sizes.

Sarcosuchus imperator is one of the biggest crocodiles to have ever lived at 40 feet in length and up to 8 tons, and also resided in prehistoric Sahara. It was the first croc to be found in the region, discovered years before this new parade of reptiles. While some of its smaller cousins galloped around pursuing prey, Sarcosuchus lived in the usual croc fashion. Except that instead of antelopes or deer, it hunted dinosaurs.

This bizarre collection of crocs could live together by having different survival strategies. While some ate plants and insects, others ate fish and bigger prey. The more agile ones could run around in search of food, even on dry land, while the bigger and slower animals captured dinner by means of ambush. Together, these ancient fossils show how our modern crocodiles, alligators and caimans are just a sliver of what their family once was.