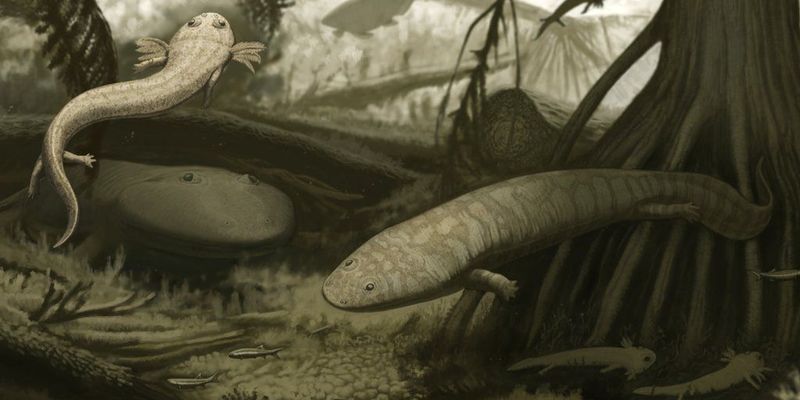 All Posts
About 270 million years ago, life on land flourished in high-latitude regions following the continental glaciation in the Late Carboniferous. Despite 150 years of study, however, the origin of this diversification is unclear. New fossil discoveries from northeastern Brazil shed a light on this mystery.

In the Early Permian, tetrapods (the four-limbed vertebrates) seemed to be in full bloom. Although the group’s living members include amphibians, birds, reptiles, and mammals, the earliest tetrapods resembled today’s salamanders. Despite the abundance of trackway and fragmentary fossils, the diversity of tetrapods in the ancient continent of Gondwana around this time remained unknown.

A formation known as Pedra de Fogo, the Parnaíba Basin of northeastern Brazil records a snapshot of life in the southern supercontinent. One study conducted by an international team attempted to describe multiple specimens from this area. Two of the n

Notable specimens belong to a group called Dvinosauria, a subgroup of the early amphibian group Temnospondyli. Timona anneae is said to resemble a mix between a salamander and an eel, while Procuhy nazariensis is likely related but too fragmentary to determine its exact appearance. Other indeterminate Temnospondyli remains from the family Rhinesuchidae were found to be much older than their previously known relatives found in South Africa.

Beyond the temnospondyls, a species named Captorhinus aguti represents the oldest known terrestrial reptile skeleton found in South America. Various fossils of ray-finned and cartilaginous fishes also give an insight into the area’s diversity, in addition to stromatolites and fossil trees preserved in life position.

The rich findings from this area helped scientists to better understand life in a tropical wetland environment at this specific time and place. They also showed that tetrapod groups that were common in later Permian and the Triassic already diversified by the Early Permian in Gondwana.


Related Stories
The crocodilian rulers of pre-Amazonian Peru
Where did snakes come from?
Oldest known snakes found in museum drawers
Supersized crocs ruled the ancient seas
Animal may be earliest known to walk upright on all fours
//sulc.us/8bowm
/articles/fanged-salamander-among-brazil-fossil-finds/